Cabin design and aesthetics are inherently subjective: the attractiveness and meaning of colours across cultures varies wildly. But as leaked pictures of Korean Air’s Airbus A321neo cabins suggest it is set to abandon its turquoise cabin branding dating back decades, is there a point at which distinctiveness is still a plus-point?

Photos of the new cabin leaked out this month, and a Korean Air spokesperson tells Runway Girl Network that the release of the images was unintentionally premature. On 30 November, however, the carrier released official photos.

Up front on the aircraft — which RGN understands is Asia’s first Airspace cabin — is a fairly standard stock version of the Collins Aerospace Diamond fully flat bed, with a few tweaks. This stalwart product, which dates back a decade and a half, is seen on numerous airlines and is very much part of the previous generation of narrowbody business class, having largely disappeared from widebody business (with the notable exception of Lufthansa and the United aircraft that have not yet been Polaris-ed). 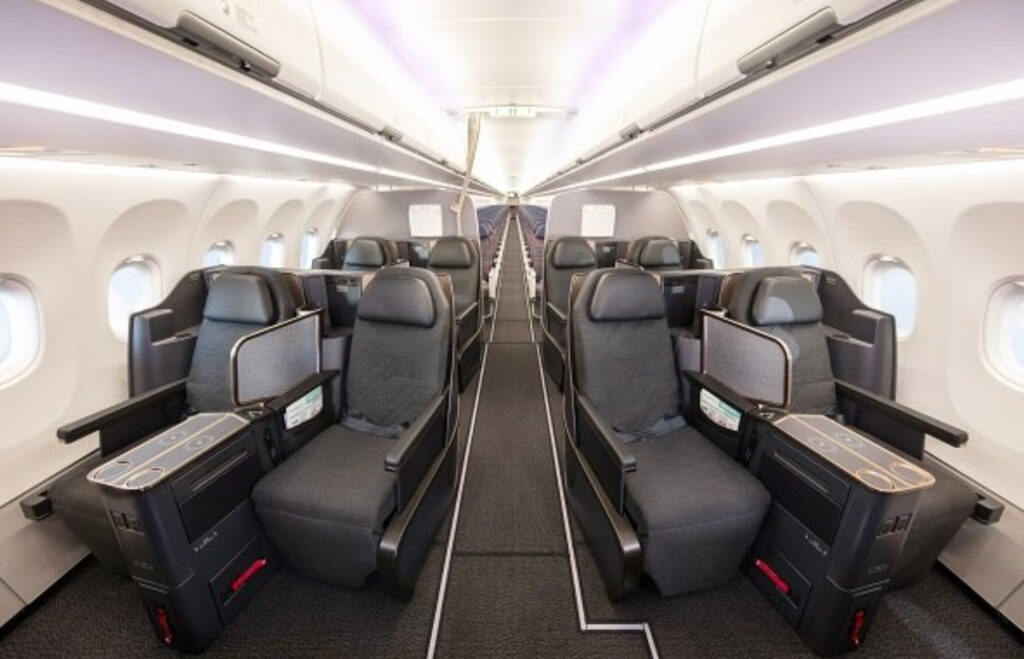 The hard product is an upgrade from the recliners on the airline’s narrowbody seats, but not up to the standard of its widebodies, which offer direct aisle access for every passenger on the Collins Apex staggered product up front on its most recent widebodies, which also operate regionally.

The changes to the seat are largely around seat shrouding and privacy. A new translucent thermoplastic privacy screen appears to be about twice the size of previous Collins Diamond implementations, but stops at roughly shoulder level. This doesn’t seem to create a substantial amount of privacy benefit given that the passenger next door can simply look over the top, but it is notable to see the translucent materials continuing to make their way into the cabin. 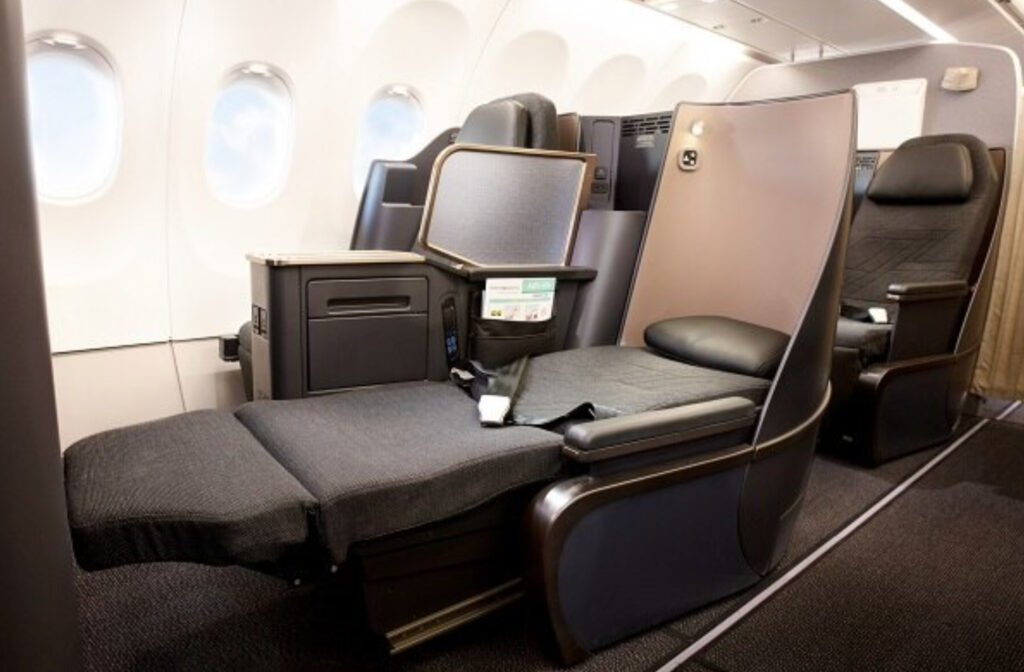 There is no privacy wing or shroud structure on the aisle-side seat, however, which feels like a missed trick in such an open cabin. It may, of course, be that adding structure at this level poses certification issues, and on the plus side this does mean a more practicable entry into the seat for wheelchair users than in many seats.

There also seems to be an extended shrouding section between the passenger and the window. A wireless charging pad is also highlighted by Korean Air. 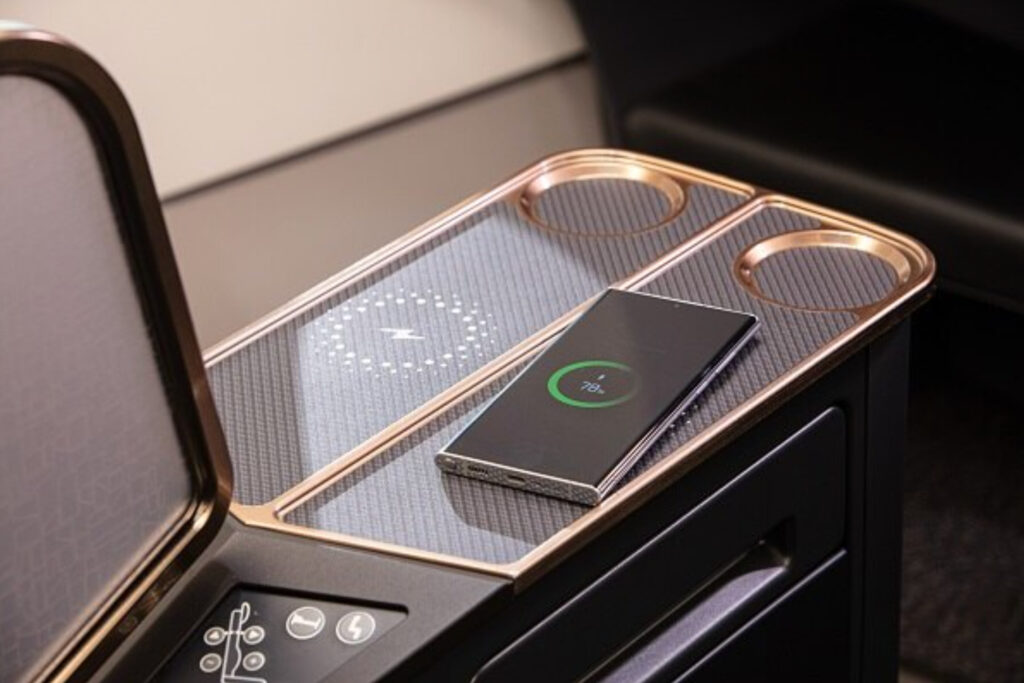 Interestingly for those of us tracking the door configuration of the Airbus Cabin Flex generation of A321neo, the Korean Air configuration appears to be using the two overwing exits but inactivating the door immediately behind the wing, according to a slide shared by Airbus’ vice president of cabin marketing Ingo Wuggetzer at the recent APEX/IFSA Exhibition in Long Beach.

Korean Air will offer the Airbus Airspace cabin on its A321neo twinjets — becoming the first in Asia to do so. By 2024, Airspace will be standard across Airbus aircraft types. #paxex #avgeek #apexexpo2022 pic.twitter.com/izPf8G55pO

But more widely, let’s talk about the CMF — the colours, material and finish that make up the cabin’s aesthetics. Korean Air has one of the most striking brand palettes in the sky, with the signature sky blue on the outside and an evolving series of teals and turquoises on fabrics inside, with sky blue repeated on the flight attendants’ Ferré uniforms.

The implementation of this palette has not always been the most up-to-date, and indeed nearly five years ago your author called it “staid”. But there is brand equity there: when you looked at a Korean Air seat, you knew exactly what airline you were looking at. None of that brand equity has been translated to the new cabin, not even as a bright cheatline in the gray fabric, on the seat’s headrest, or even a motif on the rear bulkhead wall.

The brand equity is also lacking behind the bulkhead in oddly vibrant technicolour horizontal fabric that seems intentionally non-matching in a way that doesn’t entirely evoke the “morning calm” that Korean has done well.

Design and branding must, of course, evolve. That will certainly be true if the merger with Asiana goes ahead. But abandoning nearly forty years of equity for a cabin that lacks any of its distinctiveness is an odd choice. 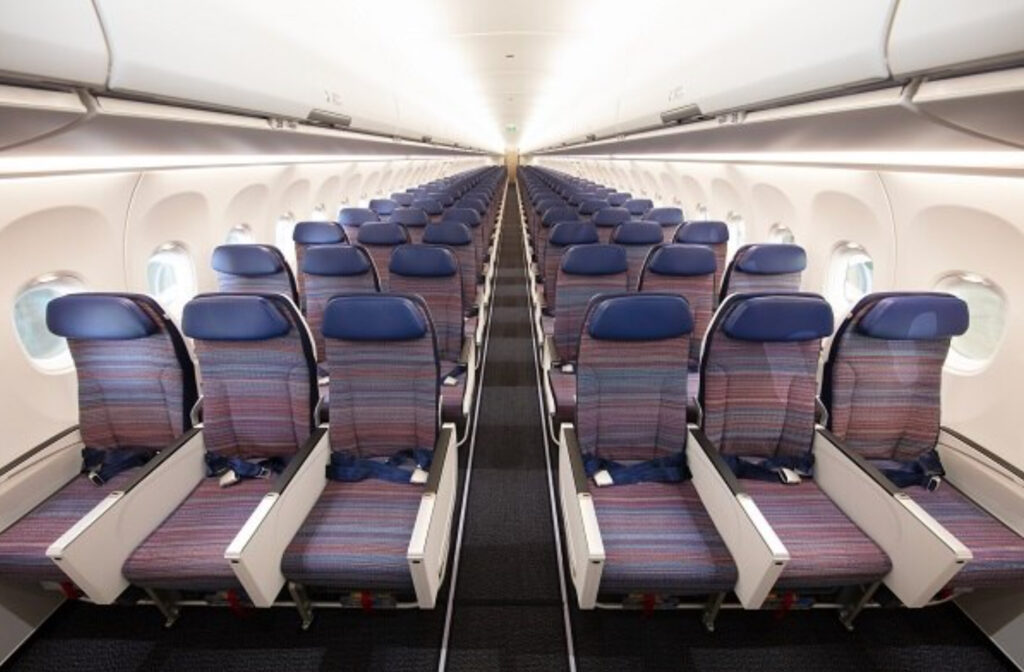