Regional first class flying within Asia can be a peculiar business, with a wide variety of aircraft, seats, service and overall passenger experience across airlines. Korean Air, for example, has four daily flights between Osaka Kansai and Seoul Incheon, using both Airbus A330s and Boeing 777s at present.

I flew KIX-ICN on one of the airline’s newest A330-300s as part of an international connection from Osaka to Paris, and while nothing really wowed me, several decisions Korean Air made in designing the service stuck out as unexpected.

Apart from the seat, which has been seeing production and maintenance issues, four aspects of the passenger experience surprised me, though: the preflight, the food and beverage, the inflight entertainment, and the overall look and feel of the cabin.

To start with, it was a little odd not to know whether I would be seated on Korean Air’s brand new Rockwell Collins Apex seats, which offer direct aisle access for every passenger, or the older Minipod seats that do not.

So, I’ve made it through to the lounge, and I still have absolutely no idea whether I have @KoreanAir_KE’s old or new product. #thatjohnonKE

When monitoring my booking and picking seats, Korean Air’s website didn’t show any way of figuring out which product it would be, which is a big consideration when choosing a seat, especially in the older 2-2-2 configuration.

I eventually found the incoming aircraft on Flightradar24, Googled the registration and found it in a blog comment that said it had the new seats.

Obviously, there are benefits to the newer seat. With the older product, on a flight of just under two hours, it’s not a major inconvenience for a window passenger to bother their aisle neighbour if they want to pop out to the lavatory or to get something from their bag, but on a longer flight many travellers prefer a centre seat that does not require the “midnight clamber” over a neighbour.

The inflight dining lacked a bit of pizzazz to separate it from business class, but it was solid. After a rather odd starter I had free choice of the bibimbap or salmon as the main course.

I enjoyed the bibimbap, and the crew were only too pleased to slip me a second tube of gochujang to add a bit of extra spice. The crew members in first class were, I must say, delightful throughout the flight. 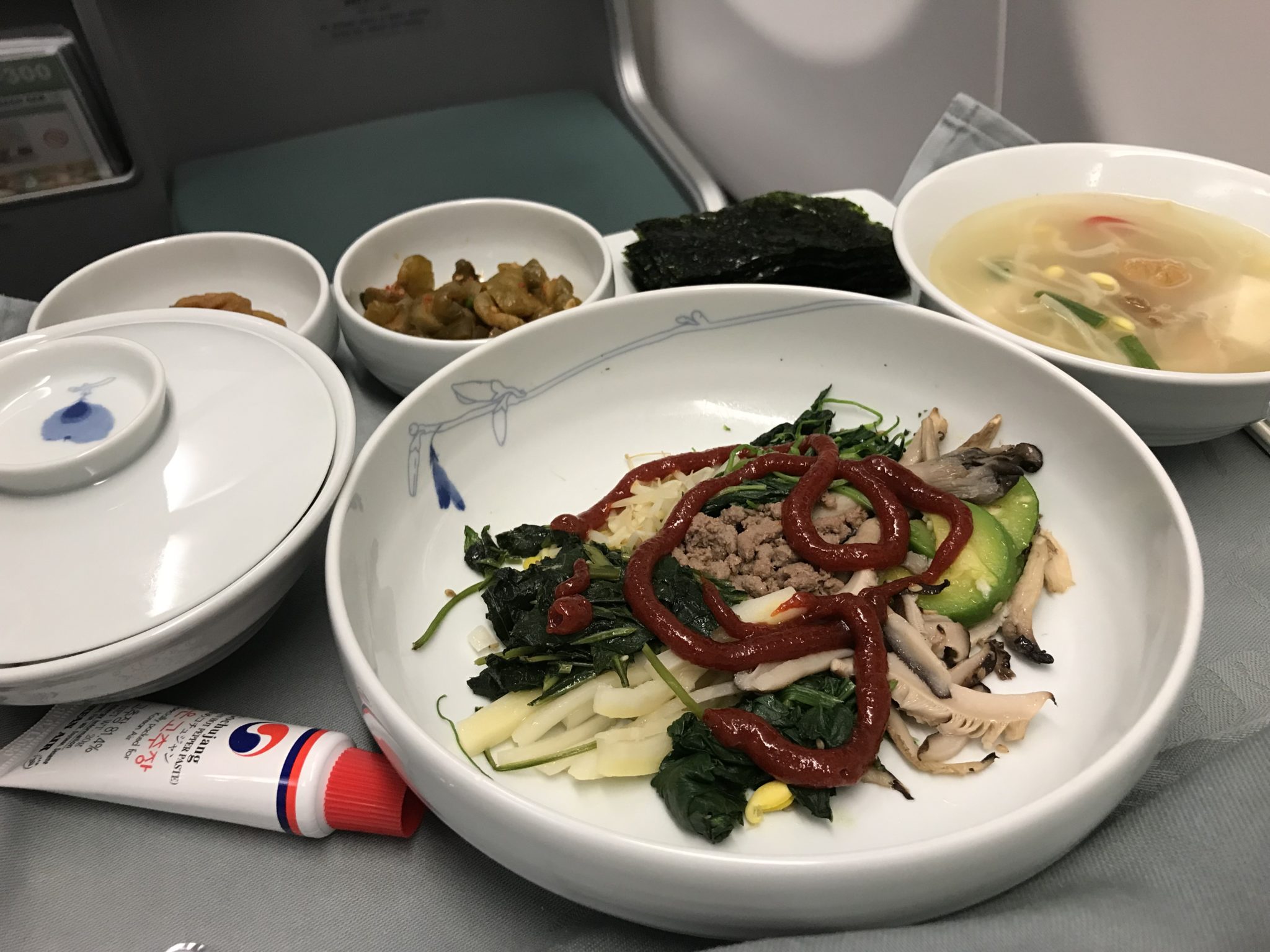 I do love bibimbap, and Korean Air does it well. Image: John Walton

The inflight beverage situation was truly baffling, however. I was handed a wine list with thirteen wines on it, although only one is available on Japan flights: a $25 bottle of 2007 Margaux (from Chateau du Tertre) that was structured and tasty on the ground but went watery and tannic at the equivalent of 8,000 feet in the air. There was also a $15 bottle of Sandemans port, which isn’t a particularly good option. 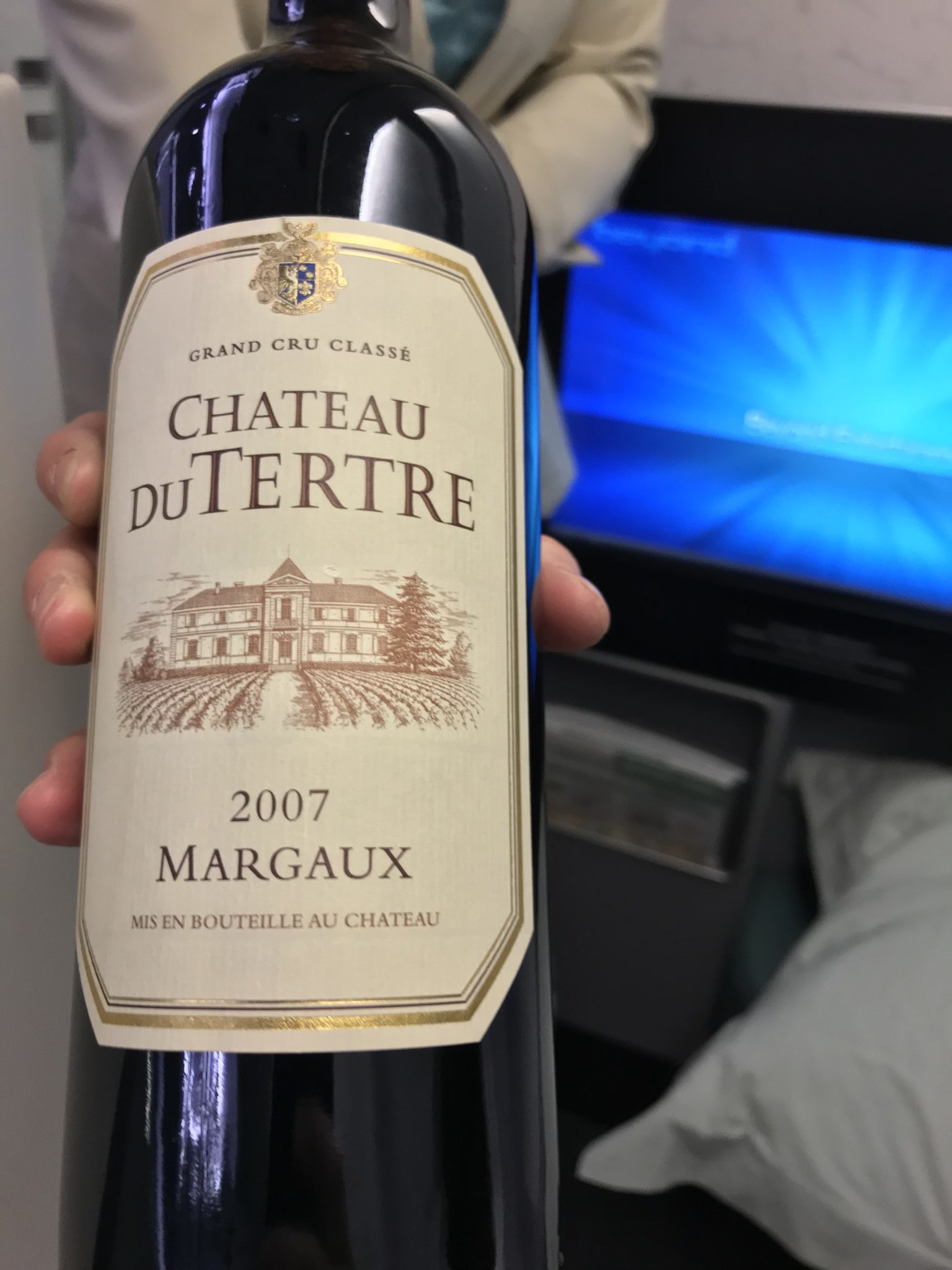 Having only one wine option in first class was very strange. Image: John Walton

Frankly, it’s a bit shameless of the airline to have so many asterisked “only on ___ flights” and still give out the wine list. It’s also oddly counterproductive to have loaded a full-sized $150-200 bottle of Johnny Walker Blue while only offering one wine, especially since the whisky is readily available in smaller sizes. 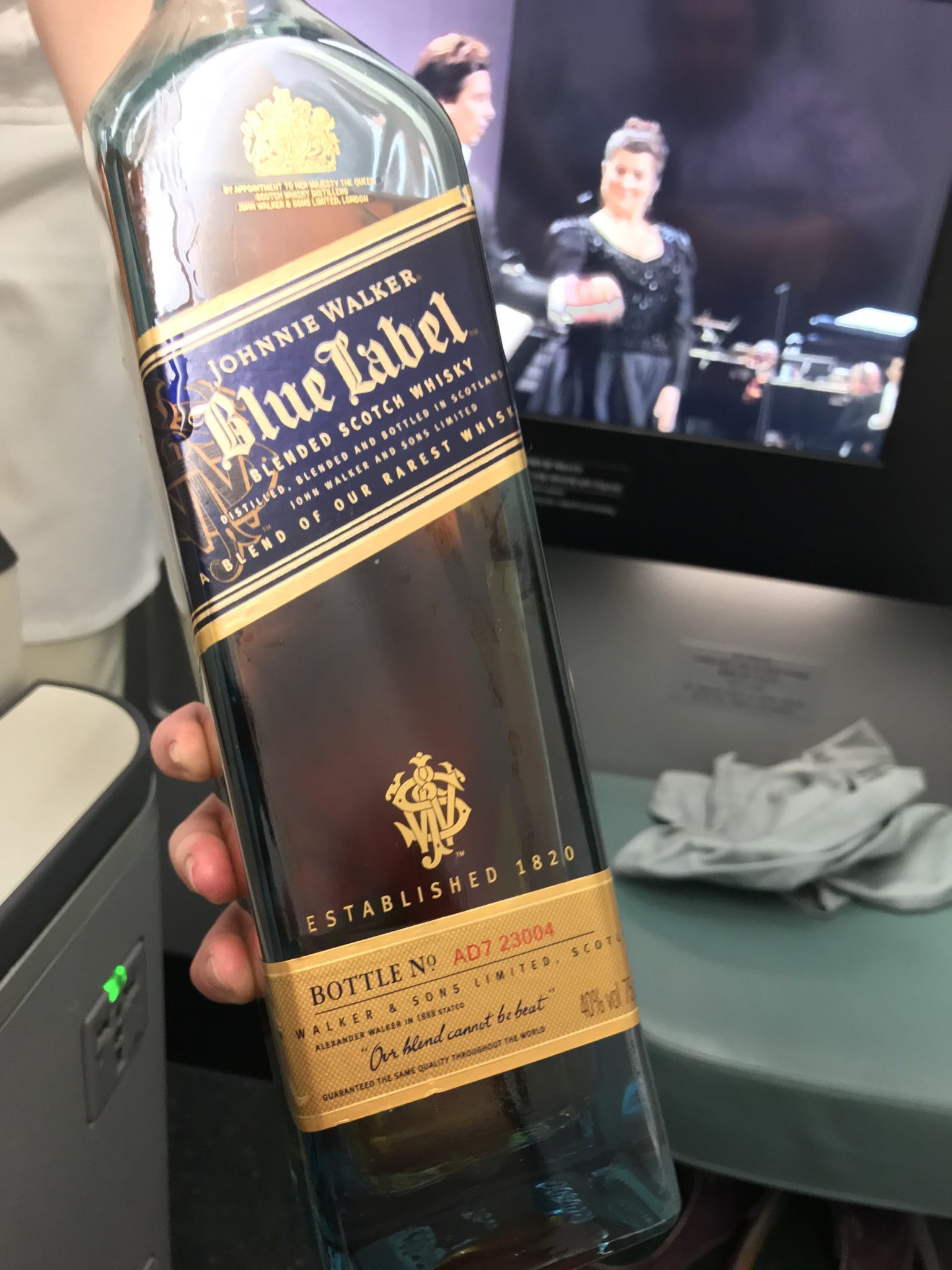 I was so baffled that a full-sized bottle of Blue Label was available, but there was no white wine. Image: John Walton

The Thales inflight entertainment system was buggy and hard to navigate, and frankly there wasn’t enough short content for the relatively brief flight.

I did enjoy the Olympics- and Paralympics-linked introductions to a number of sports, though, and was fascinated to learn more about the sport of wheelchair curling.

I also enjoyed a bit of a sixteen-year-old Gran Gala di Verdi concert of opera and classical music, which I finished on my connecting flight the next day.

Lastly, on an aesthetic level I thought that the general look and feel of the cabin missed a trick given the expanse of the same thermoplastic used for the very close-in front, back, side and top panelling.

It feels like I’ve been talking for years now to the Sekisuis and the Boltarons (let alone the JPAs and Tangerines) of this world about the range of attractive, non-industrial materials available for cabin use. It’s a shame that nobody thought to use that in this case.

A very stirring instrumental version of You Raise Me Up as boarding music makes a great video backing track for a cabin vid. #thatjohnonKE pic.twitter.com/bOnXDtmbSQ

How Google and RailTel are bridging the digital divide in India