Aircraft tray table innovator SmartTray International’s president and CEO, Nick Pajic is heading to the Aircraft Interiors Expo in Hamburg with a fresh spring in his step about the firm’s prospects for accelerating out of the COVID-19 crisis by facilitating the hands-free use of gadgets by more airline passengers.

“The COVID-19 pandemic was devastating on mass transportation businesses and SmartTray was not an exception. The good news, not only did we survive and are on the road to a full recovery, but we are also on a track to have [a] banner year,” Pajic tells Runway Girl Network.

He reveals that the firm is in discussions with select aircraft seatmakers about licensing its patented technology with them.

SmartTray’s personal electronic device (PED) holders, which are integrated into tray tables and seats, have been available in aviation — and indeed other industries — for a decade. Several airlines have already deployed the technology in various iterations; United, for example. 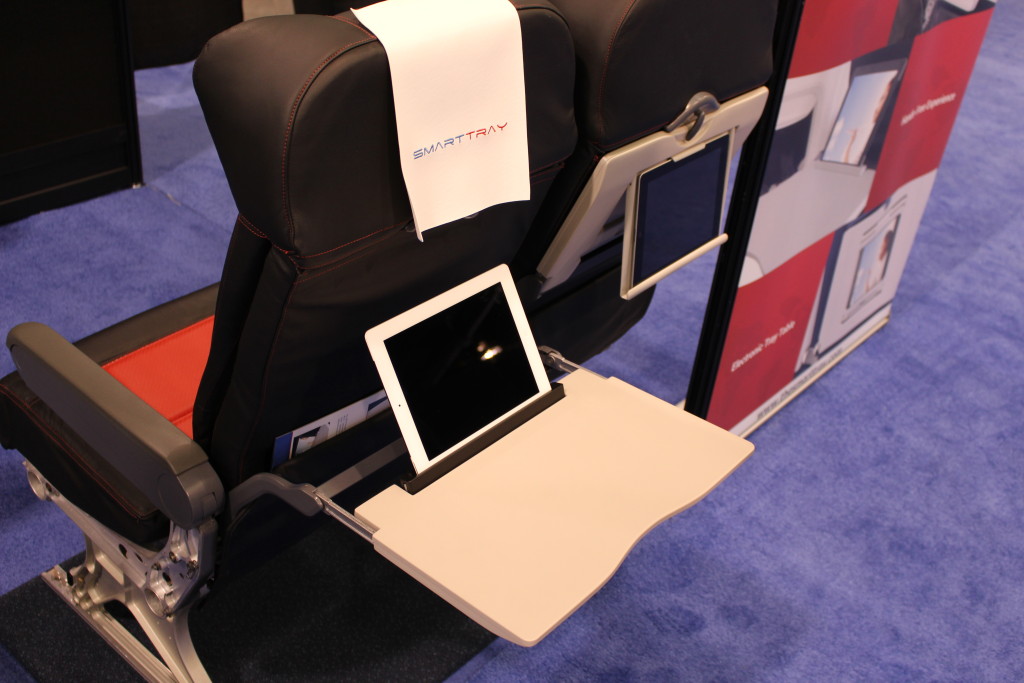 SmartTray has been serving aviation for the last ten years. Image: John Walton

“Ground/water verticals like passenger rail, motorcoach, cruise ships, and ferries were not licensed, which SmartTray reserved for itself,” he says. 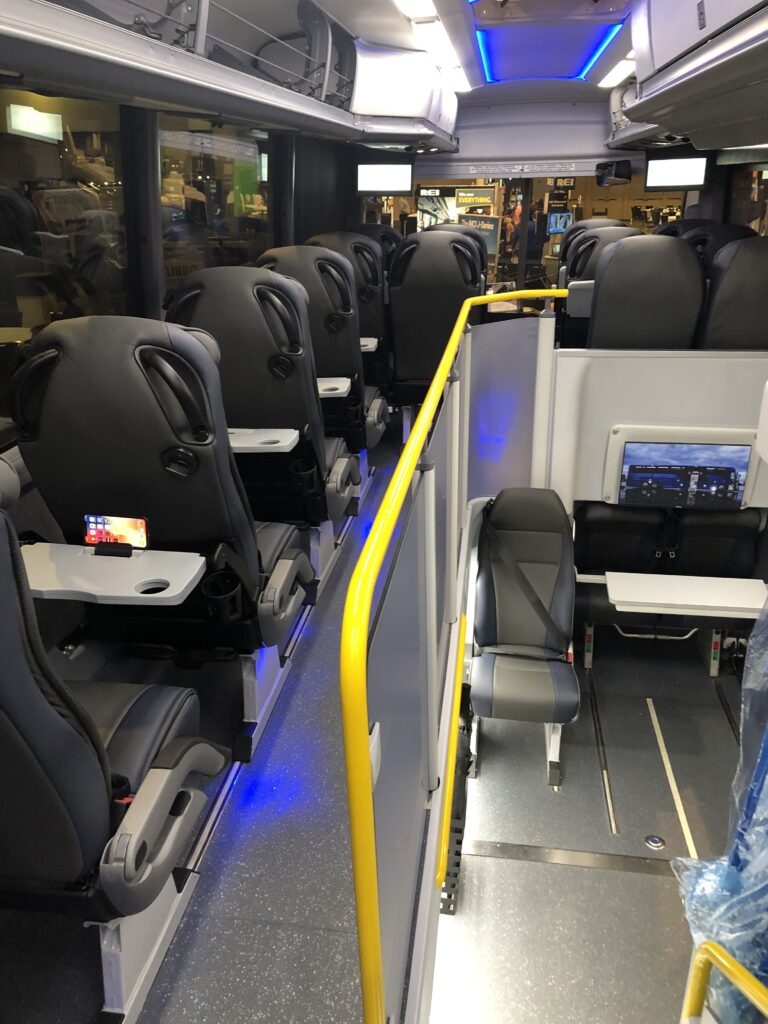 It appears that Astronics no longer showcases SmartTray’s technology on its website. The company could not be immediately reached for comment on its relationship with SmartTray.

Pajic says that, as both sides moved to a non-exclusive patent licensing agreement, he focused on finishing non-aero projects including at Facebook’s Menlo Park, California campus as well as for Ford and the Lincoln Continental Coach Door Edition car.

“It was a hit with Facebook employees — they loved it. Before SmartTray, their employees had to place their laptops, and electronic tablets on their laps; afterwards, they were able to use integrated PED holders in tray tables and [the] back of the seats to place their smartphones and tables and use it hands-free,” says Pajic.

Now that SmartTray is readying for a rebound in aviation, it is confident about inking new integration deals with aircraft seatmakers and expects to make announcements in the near future.

The company is hitting the market with a more direct approach at a time when passengers increasingly expect to be able to comfortably watch their own content in-flight, as well as avail of airlines’ onboard wireless entertainment and connectivity services via their PEDs. Passengers are also second-screening by using their mobile devices whilst watching in-seat IFE screens. All of SmartTray’s solutions provide a more ergonomic way for travelers to use their PEDs.

Backed by a robust patent portfolio, SmartTray’s X-branded series includes a seatback mounted economy tray table that facilitates hands-free use of smartphones and tablets in proprietary PED holders; as well as seatback and in-arm PED holders for economy and premium classes with mechanisms that expand and retract automatically to the thickness of popular devices.

Recent new products include the so-called SmartTray X5, an in-arm tray table with patented kickstands that hold a wide range of devices and various screen view angles; plus the X7, a telescoping PED holder designed to fit into compact spaces. 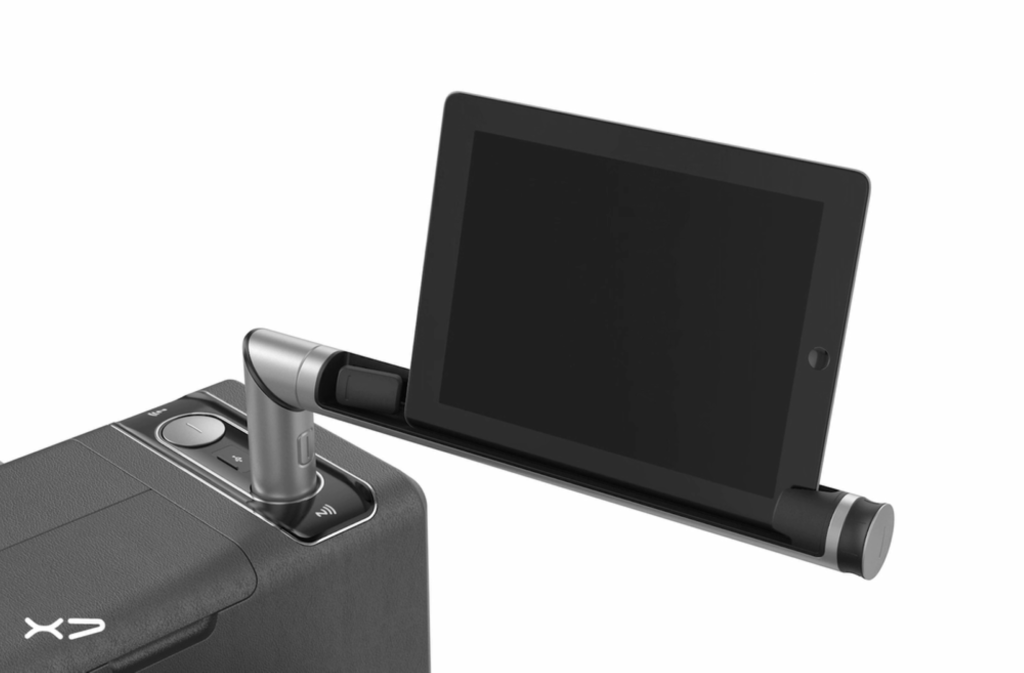 Aerofoam Industries, which manufactured over 8,000 tray tables for SmartTray integrations, will have SmartTray’s technology on display at its booth (5A50) at the Aircraft Interiors Expo in Hamburg. In advance of the show, SmartTray has announced the launch of its patent pending QR code encoded ads on its PED-friendly tray tables to drive ancillary revenue for airlines.

All photos of the X7, and SmartTray’s implementation on a coach bus, credited to SmartTray