Safran Seats has some of the strongest business class herringbone heritage in the industry, with both Contour and Sicma as predecessor seatmaker companies. Its latest herringbone to break cover is Vue, an outward facing herringbone, with both sides of the single aisle pointing towards the windows.

“This is why we call this product Vue, because you have a nice view”, quipped Quentin Munier, executive vice president for strategy and innovation, showing Runway Girl Network’s journalists the seat at the company’s stand at the Aircraft Interiors Expo.

Vue, unveiled in late 2021 at rendering stage, is aimed squarely at the longhaul narrowbody market, with the increased angle of 45 degrees away from the aircraft centreline that is rapidly becoming a hallmark of herringbones in this size of cabin. 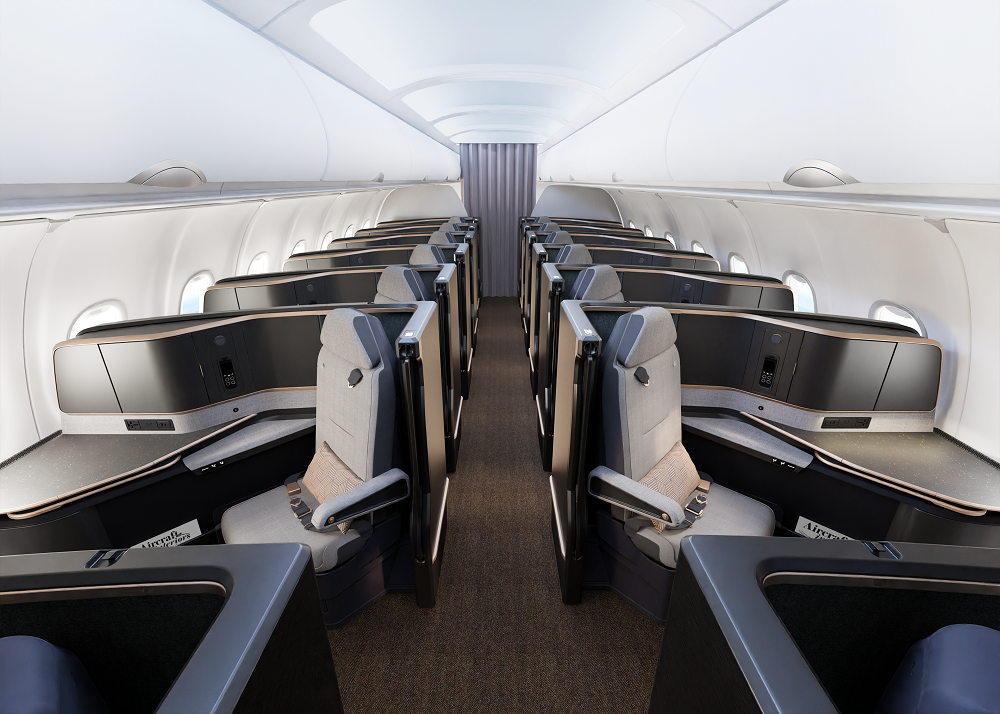 Vue was created for the narrowbody market. Image: Safran

The company is focussing on five selling points for Vue: efficiency, equal comfort (no zero-sum problem here), density, ease of access, and stowage. Indeed, Munier notes, “we have the ability to have the meal tray and TV deployed while still being able to exit the product.” 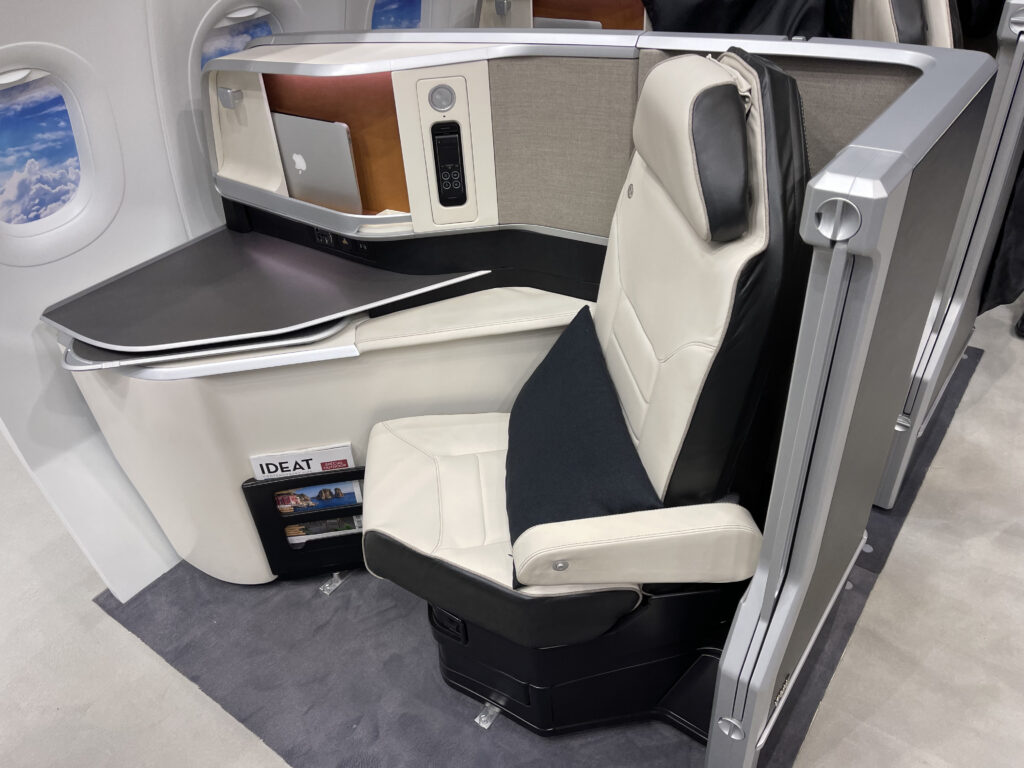 Vue’s table rotates and slides out from the side console. Image: John Walton

In addition, he says, “there is all the customisability — you have a passenger experience which is like for like with what you would expect on the standard widebody high-end business class product.” 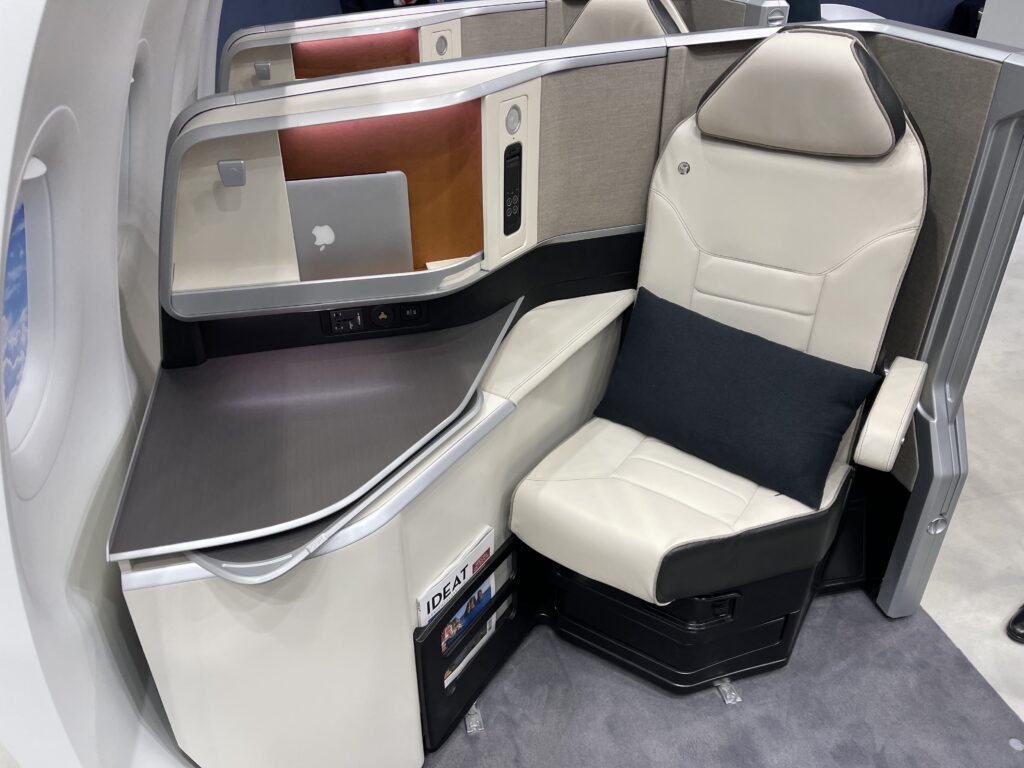 But perhaps the most impressive part about Vue is that it is astoundingly spacious, particularly in bed mode, and even at 36” of pitch. (We will have to reserve judgment on the 33” version.)

While in-depth discussion of the ergonomics needs more than just a quick try-out at an AIX stand, the space feels mostly down to the expansive footwell area, which not only provides a frankly massive ottoman to a scale not even seen on widebodies, but also features an innovative arched structural support that enables the seat to be open to the aircraft sidewell at foot level. 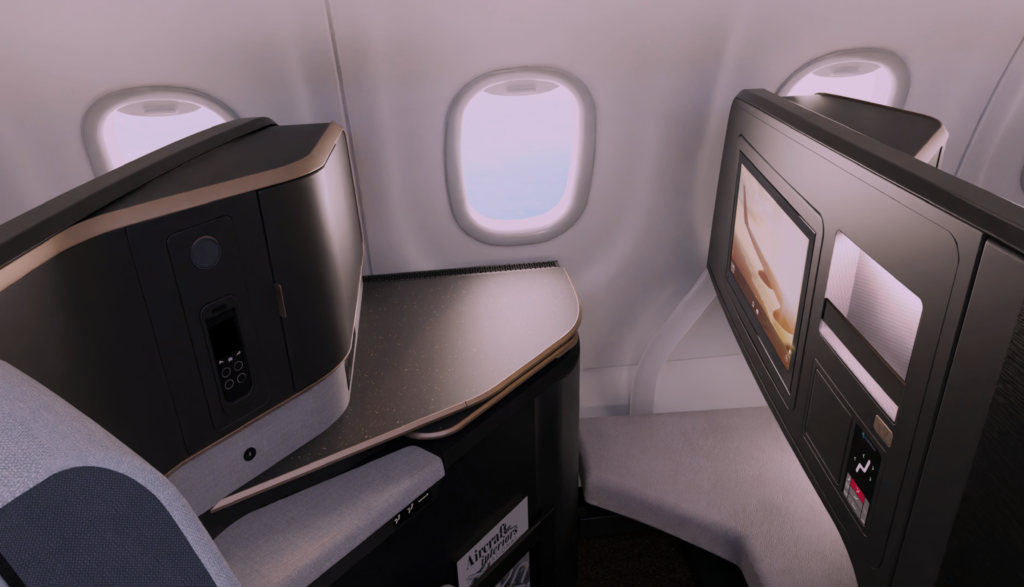 The key curved structural support opens up the footwell to the sidewall. Image: Safran

That’s opens up a few extra inches and avoids the problem where taller passengers and those with bigger feet find themselves cramped in smaller footwell areas.

Safran is showing Vue with a forward-sliding door, but Munier explains that “we have integrated the door — the hard door, but also the flexible door… that we have on another mockup, which enables us to save some some weight and volume for the living space.”

With the angle of 45° away from the aircraft centerline, though, and the inherent feeling of privacy this gives, it would be interesting to see the space, volume and weight tradeoffs that a no-doors option would give.

Safran confirmed two launch customers for Vue for the Boeing 737 and Airbus A320 aircraft families to RGN, with Munier citing the “A321 long range”. Executive vice president for sales Christophe Accolas previously cited customers on the A321XLR and a 737 MAX operator from the Middle East in an interview with RGN. The company expects the seat to enter into service in 2023.