Nearly two years ago, a groundbreaking patent decision was reached by the UK Supreme Court in the case known as Virgin v Contour. At stake was the 2003 Virgin Atlantic Upper Class Suite — the world’s first fully flat business class seat with direct aisle access — and whether Contour Aerospace (now part of seat conglomerate Zodiac) infringed upon it with the inward herringbone seats it sold to Delta, Air Canada and Jet Airways.

RGN approached Virgin Atlantic for comment, but learned that “as the various streams of litigation between the parties have now been settled and this is subject to the terms of a confidential settlement agreement, I’m afraid we’re not really able to provide comment”. Shortly after the ruling, Virgin sold its Threesixty Aerospace unit — which had designed the now-abandoned 2011 Dream Suite product, seen only on the airline’s A330s — to Zodiac, but told Bloomberg that the move was “not directly linked to the ruling”.

With Virgin now being part owned by Delta, and Virgin’s seatmaker owned by Zodiac, the only winners seem to have been a decade of lawyers.

But from a passenger experience viewpoint, it appears many seatmakers have felt free to skate close to the intellectual property wind, with imitation being the sincerest form of seatmaking flattery. The Virgin v Contour decision not only made significant patent caselaw, but it seems the July 2013 decision created an environment comfortable enough where every major seatmaker at the Aircraft Interiors Expo (AIX) showed a herringbone seat this year.

Zodiac’s Cirrus seat, ironically enough, is the seat that is being most “flattered”. The seatmaker is still selling multiple variants and nearly infinite customisations of its award winning seat — a seat that is so popular with airlines and customers that it led RGN to ask whether it meant we have hit peak business class in the context of Cathay Pacific’s next seat being considered an upgrade to Cirrus rather than a new framework. 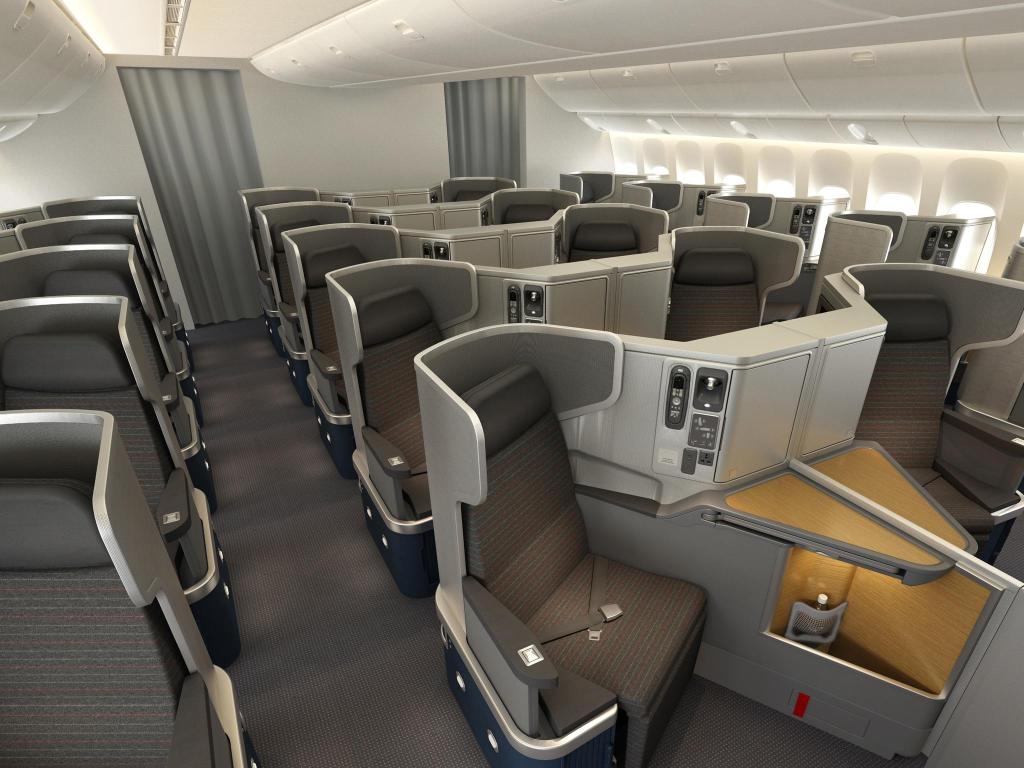 B/E Aerospace’s Super Diamond was also on display, in a number of configurations and trims, allowing the seatmaker to match Zodiac’s range of offerings from US Airways and Delta at the “serviceably robust” end of the scale to the “ergonomically optimised” end, like Cathay Pacific. 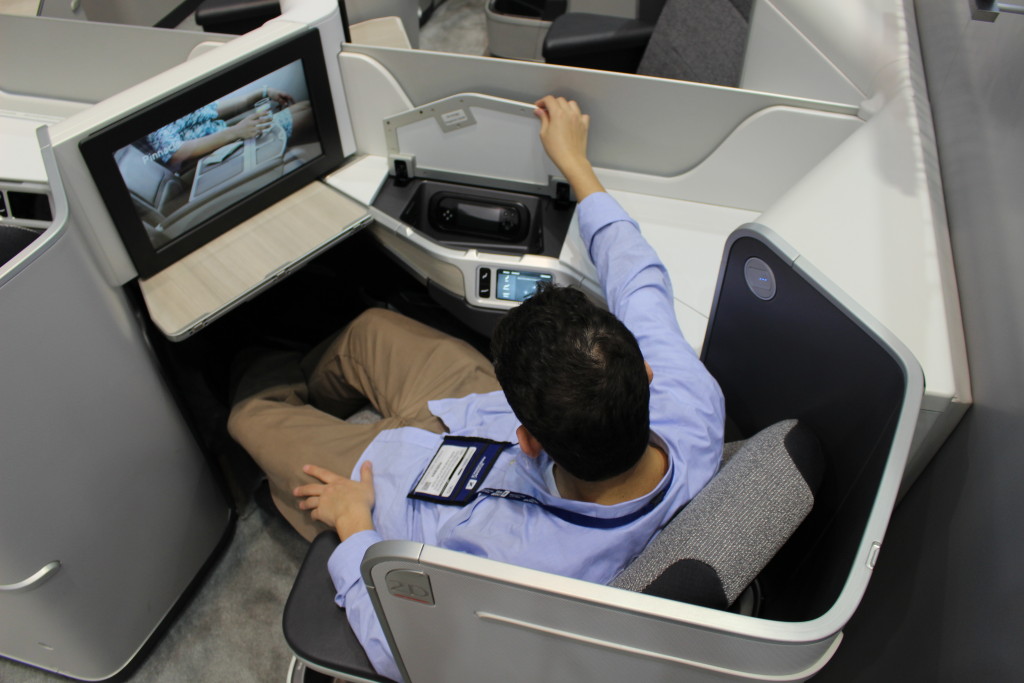 Airbus subsidiary Sogerma Stelia (soon to be branded as simply Stelia) brought its new Comet seat out of the backroom closet where it had been displayed last year. Comet can be offered with either an inward or outward facing herringbone at the window, though it’s unclear why a widebody carrier would choose inward facing, since the key benefits of an outward facing herringbone layout are privacy and the ability to look out the window. 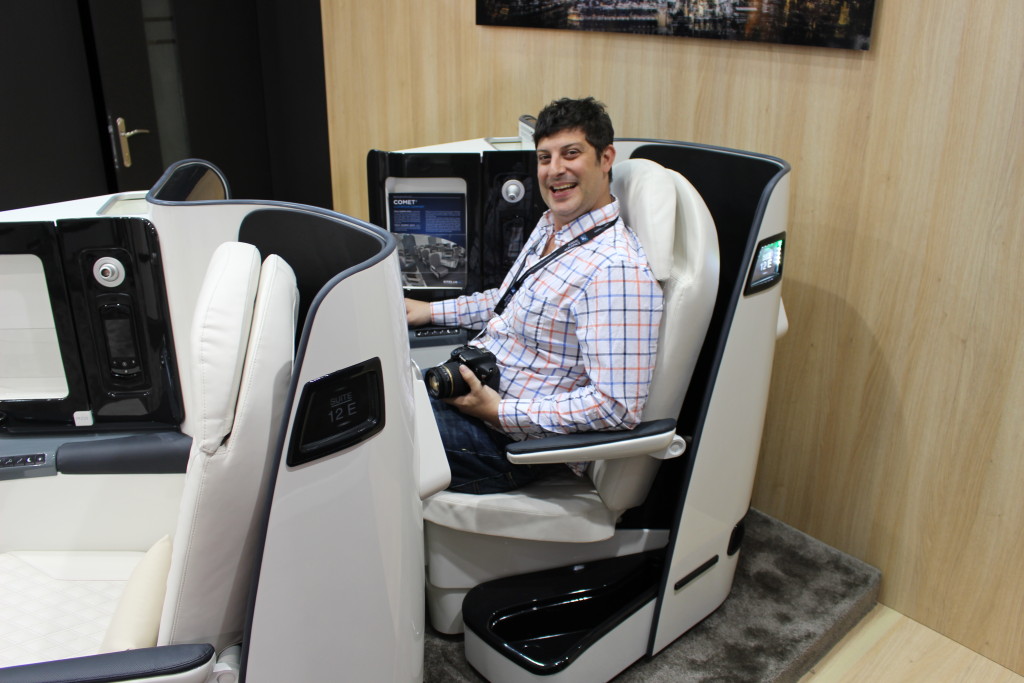 Recaro, meanwhile, showed its new CL6710, which works on a slightly angled herringbone principle, with the angle allowing a reduced pitch and optimising foot space. Window seats face the window, middle seats angle towards each other and aisle seats face the aisle, although the angle is not as great as a traditional herringbone. Crucially, Recaro’s latest generation of actuators makes the seat’s movement virtually silent — an increasingly important factor in newer, quieter cabins — and controllable via an app on your own phone. 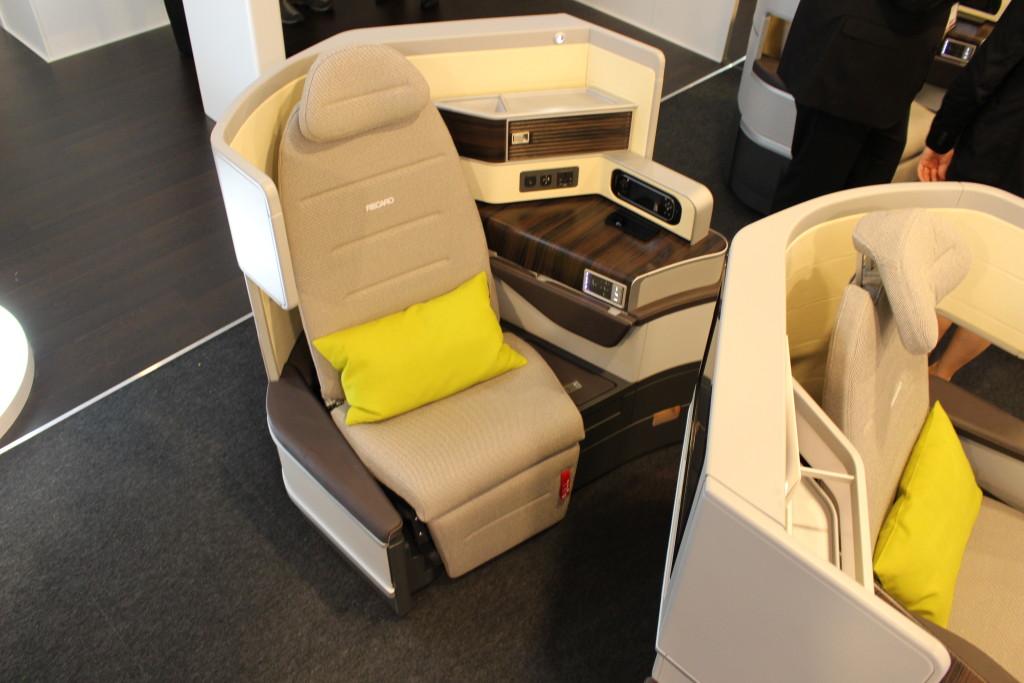 But the question remains: what benefits are actually being gained by every seatmaker offering a largely similar style of seating? On the one hand, the variables between the seatmakers’ products may well be the unique selling point required for Airline X to serve their passenger segments, and Cirrus has been a passenger pleaser since it was first installed on a US Airways A330. 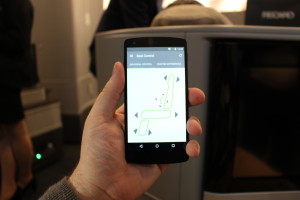 Control your Recaro seat with an app on your phone

Moreover, as the cataclysmic falsification of safety data by disgraced seatmaker Koito and the rather less dramatic delays by Zodiac have shown, having multiple fully flat baskets in which to put airlines’ direct aisle access eggs is not a bad thing. But on the other hand, there will be airlines whom the herringbone concept doesn’t suit, and ensuring that these customers — and their customers — are served is also important.

Zodiac is hoping to hit that sweet spot with the launch of a new ‘Super Business Class’ seat dubbed Fusio (see video below), which it says has the amenity of first with the density of business.

At the end of the day, being inspired by and improving on industry-leading passenger experience products is one thing. Creating the best seat in the world for each airline is another.