First class or business-plus? That’s the question that many airlines are asking themselves when it comes to deciding how to sell the extra-feature seats at the front of their business class cabins. Taiwan-based startup airline Starlux, for its part, is the first to go full first class, with four upgraded — and higher-walled — suites ahead of the 26 business class seats in the forward cabin of its new Airbus A350-900.

Both first and business are outward-facing herringbone seats contained within doored mini-suites, where the doors slide forwards from a housing a couple of inches thick. Starlux says that both seats feature a zero-G function when in Z-bed mode.

The actual seating product here is unclear, with few incontrovertible design clues to reveal which herringbone is being used. Questions to seatmakers have not yet revealed a likely suspect. The airline confirmed that its economy and premium economy products, however, are from German seatmaker Recaro.

These are very much a first-look set of renderings and a mockup, and we hesitate to draw too many conclusions from them — not least because the front suite on the left-hand side of the aircraft is marked as 1K. It would appear, though that we have seen both 1K and 1G, which look substantially similar: no wild changes to make a double bed in the front row.

Nonetheless, the first class product presented is very attractive indeed, in an attractive series of greys, golds and browns that feel luxurious in an automotive kind of way. That’s perhaps not a surprising descriptor given that the design partner is BMW Designworks, which calls this the premium CMF “Enchanting Sophistication” within the full aircraft cabin’s theme of “Glisten”. 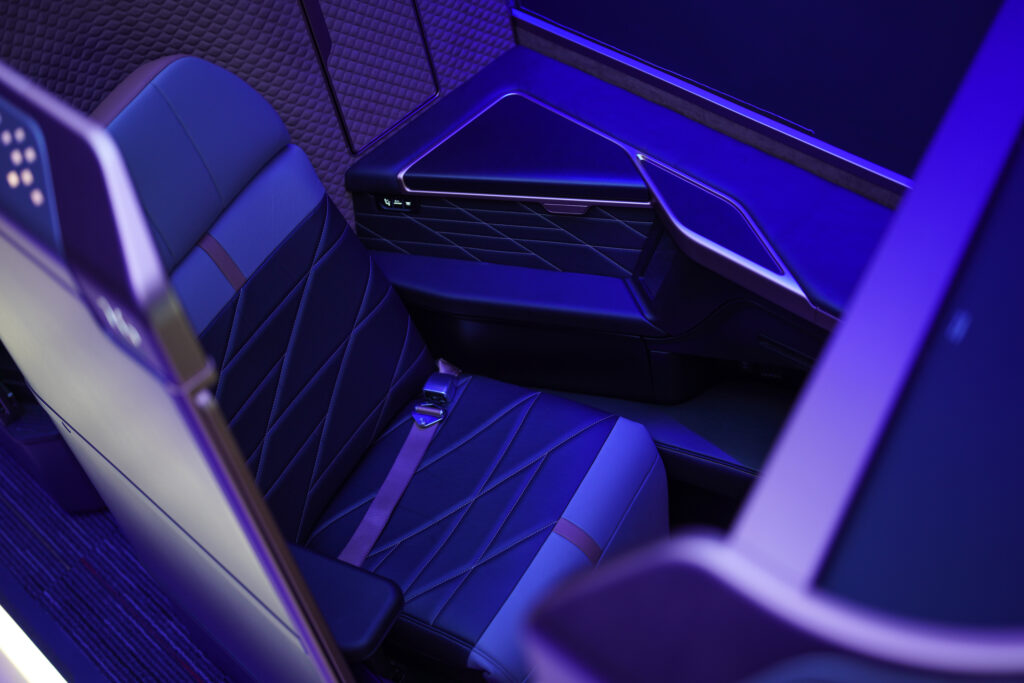 The first class palette works especially well with the LED lighting with which Starlux has washed the seat on display. The airline describes it as “customisable ambient lighting depending on the time of year: Chinese New Year, White Christmas, and Moon Festival.” Gong xi fa moodlighting. 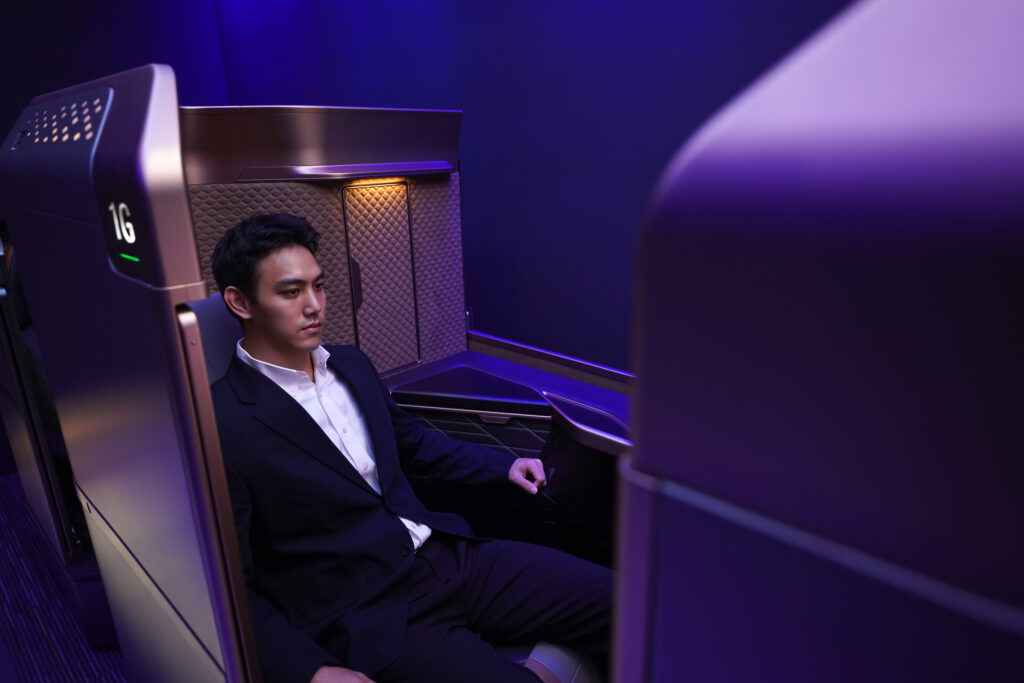 There’s something odd going on with the pattern-matching on the storage door, but otherwise the first class product reacts well to moodlighting. Image: Starlux

The rounded diamond motif from the Starlux logo repeats across the seat, from the striking seat texture itself to the quilted effect material on the rear wall of the suite and the side storage cupboard, to the shape of the cocktail table surface and the outside of the suite doors. 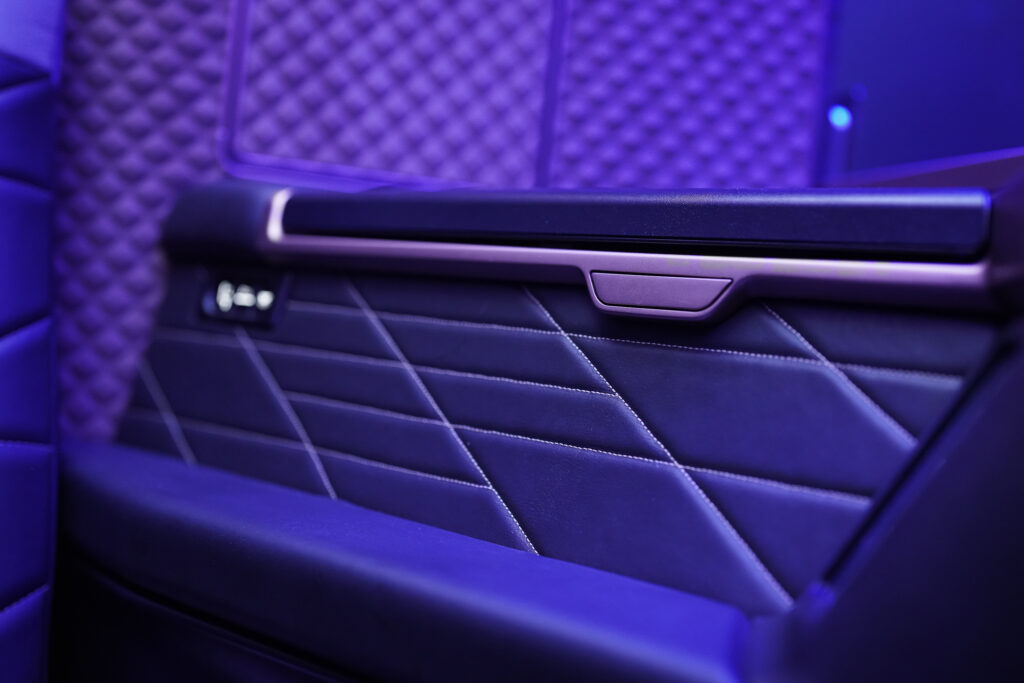 Notably, the walls of the first class suite are substantially higher than the business class suites in subsequent rows: almost a foot higher, at 60 inches rather than the 48.5 inches of business. 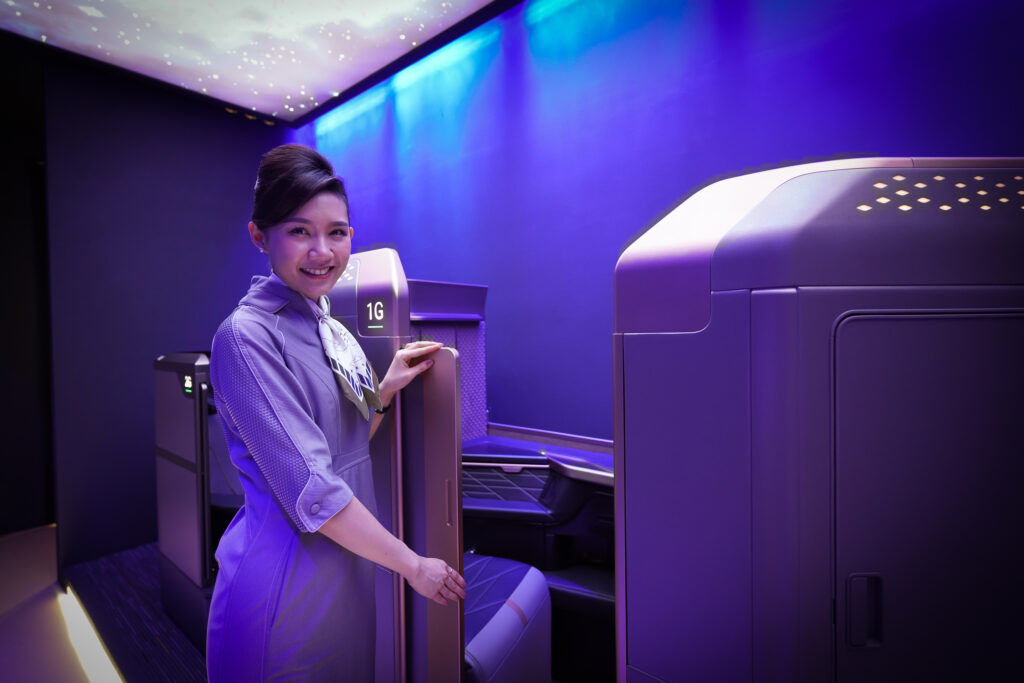 The door in first doesn’t go all the way to the top of the suite, but it is higher than business. Image: Starlux

This will go some way towards making the space feel more special and towards ensuring that the light and noise from the galley are less bothersome. The door, however, does not appear to extend to the full height of the shroud when extended, although it does seem to be higher than the business door.

While we don’t have a full rendering of the front part of the first class suite, where it would interface with the forward cabin monument, Starlux also mentions a personal wardrobe and a 32 inch inflight entertainment screen, up from 24 inches in business.

Renderings have the seat sidewalls firmly up against the expanded walls of the NPS A350, which will make it an inch more spacious than previous generations of the aircraft.

In the six rows of business class, meanwhile, we see a similar (if lower-walled) doored suite but in a much more sedately elegant palette, with bronzes, browns and greys, as well as an attractive stone-effect on the side table.

The business class CMF is more coppers and browns — but itself feels premium and modern. Image: Starlux

All in all, both seats and the wider cabin are effective — and we might even go as far to agree with BMW Designworks that they are “enchanting sophistication”. The key outstanding question is how Starlux will merchandise the seat.