With its new Flagship Suite, American Airlines is the last US carrier to finally remove longhaul first, moving to the industry trend of ambiguously naming an updated business class — with what looks to be a business-first section in the front row.

American’s seats differ between narrowbody and widebody aircraft, so let’s start with the widebodies. Here, the doored suite is to be installed on factory-fresh Boeing 787-9s from 2024.

From the shape of the seat, the monitor housing structure, the support beam underneath the footwell, and several other design cues, the 787-9 version of this, at least, appears to be Adient Ascent.

That’s the same seat as Qatar Airways’ 2019 Dreamliner product, which your author tried out for a nice sit-down at the Farnborough Airshow earlier this summer and which certainly impressed.

Single-panel doors slide forwards to close the suite, and the cabin is laid out in a fully outward-facing herringbone, where window seats face the windows and centre seats face the centerline — not the hybrid model that Qatar Airways uses.

This layout is an interesting choice from American, since the hybrid model feels substantially more private in many ways and allows for a much better experience when travelling with a partner. Given the importance of premium leisure travel to the business class passenger as the industry emerges from the COVID-19 pandemic and its effects on business travel demand, this may be a gamble. 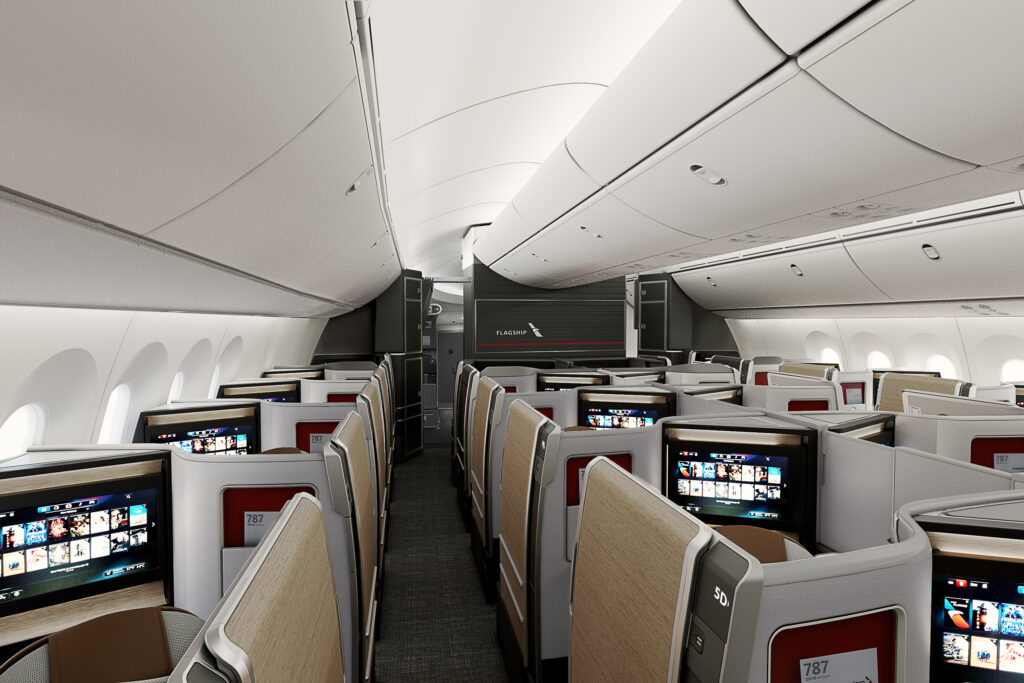 Centre seats point towards each other in this layout. Image: American Airlines

Inside the suite, it’s the same Adient Ascent product that we’ve seen before, with a few tweaks. One is a well-sized fold-down cocktail table that emerges from the literature pocket structure, which is smart design given its location right next to the aisle. 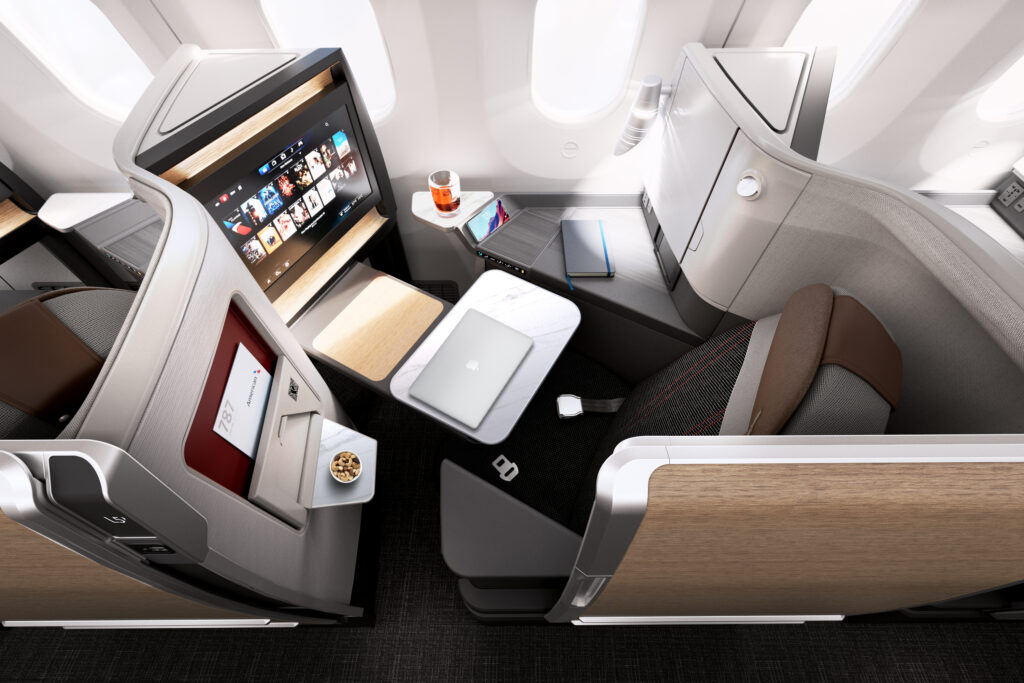 The new seat seems to have more cocktail tables than anything else. Image: American Airlines

A passive phone stand at wrist level on the side table is an interesting addition, but there is no mention of wireless charging. There’s a second tiny cocktail table ahead of this stand. The open ergonomics and usability question, though, is whether passengers prefer this option to having an entirely flat larger table option to place laptops and tablets at an optimal viewing angle while dining.

A noteworthy detail is the QR code printed on the literature pocket that features the eagle from the old Massimo Vignelli American Airlines logo. While aviation history buffs will be pleased to see it back, the last time we reviewed American’s brand guidelines they said very firmly not to use it, so it will be fascinating to see — in an amused, niche sort of way — whether this becomes the new Flight Symbol as these renderings transition to real life seat. 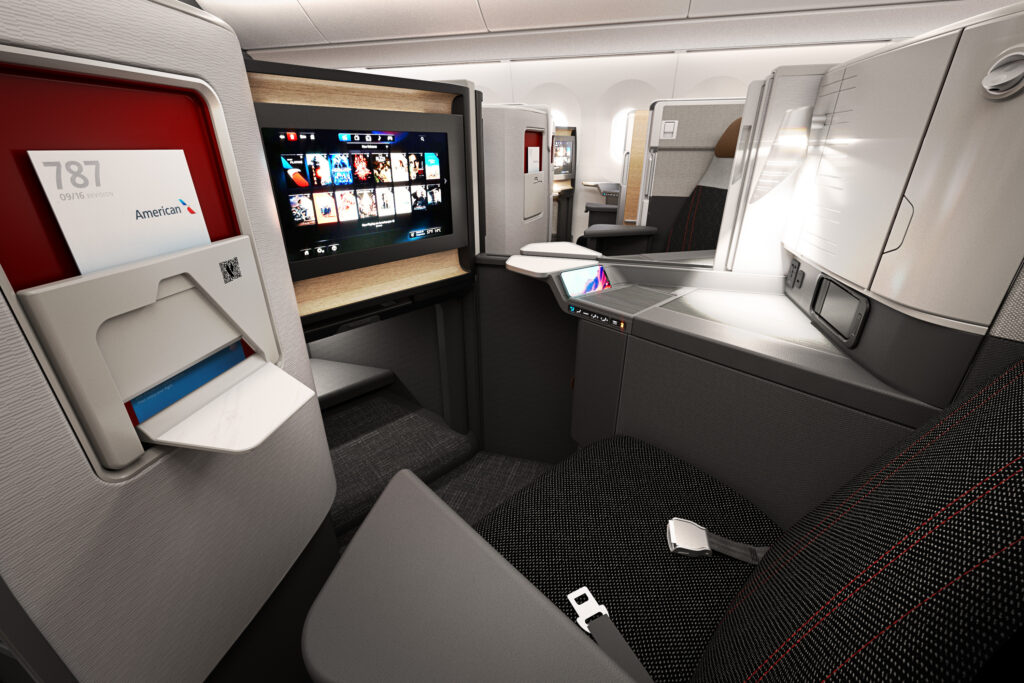 Without any fanfare, the front row of the Dreamliner cabin appears to be a business-plus product, with a differently coloured door, additional privacy surround, and extra space. It’ll be interesting to see how American brands this seat — Flagship Cabin Extra? — and indeed how it sells it as a product. 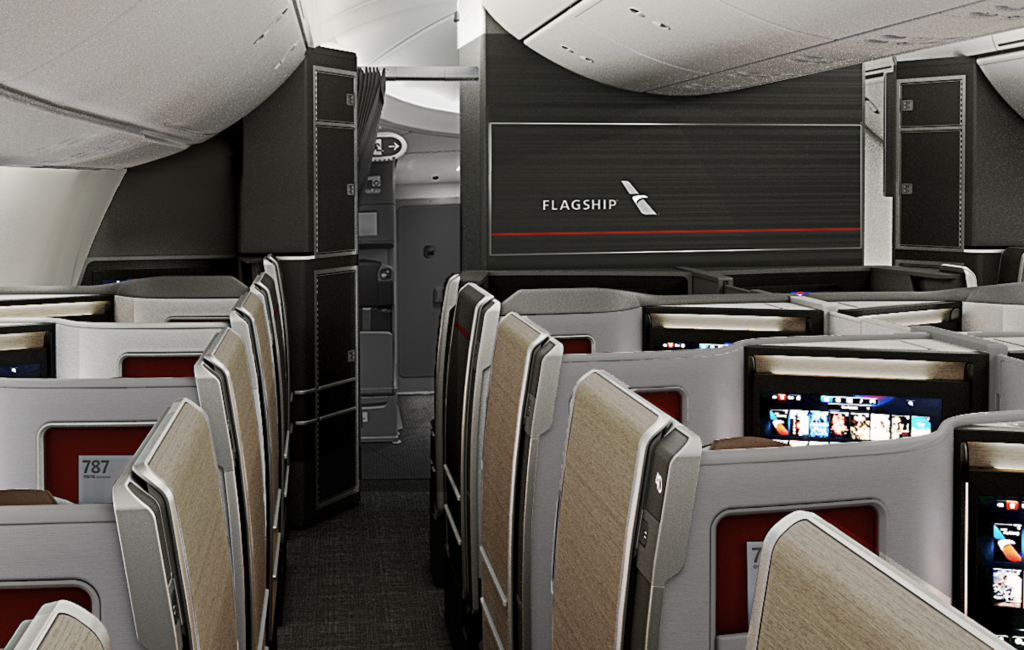 At the front of the cabin, the first row is styled differently. Image: American Airlines

There is no detail as yet around what happens to the much-delayed 787 aircraft caught up in Boeing’s Dreamliner production stoppage débacle. There’s also no detail about whether, how or when existing 787-9s — or the 787-8 fleet — will be refitted. 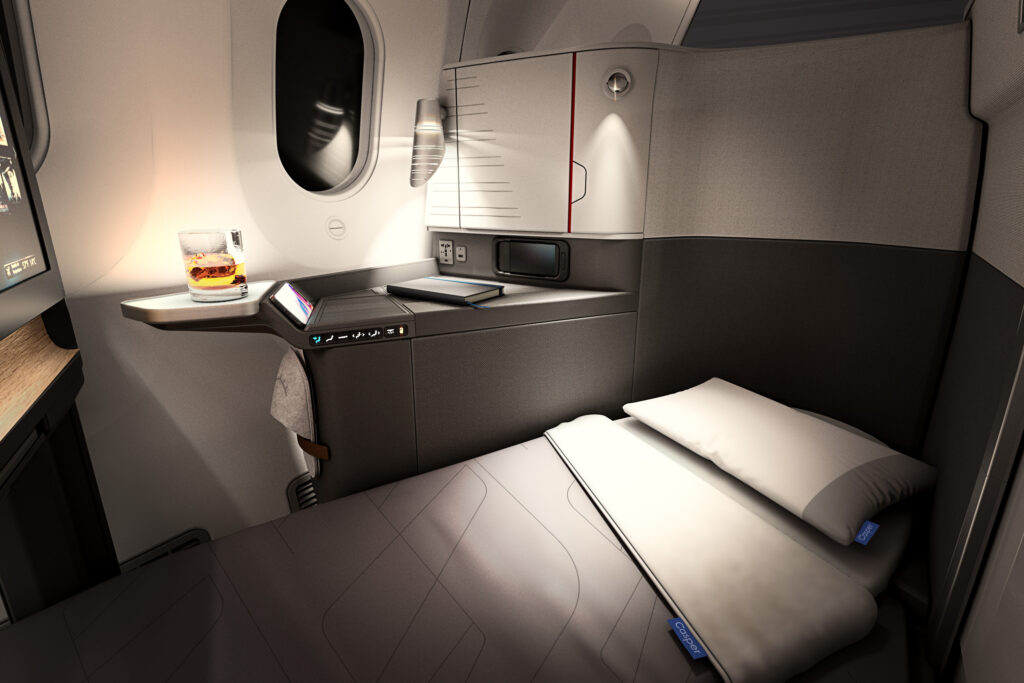 This render puts the bed at an interesting angle — the usual slight angle of attack tilt, or some massaging of bed length figures? Image: American Airlines

The Boeing 777-300ER, however, will be refitted with the new product, so it’s farewell to the first class rotating seat with its first class product your author last experienced some five years ago and the 2010-era Cathay Pacific Cirrus herringbone in business.

Both the 787-9 and 777-300ER will be heavy on business and, indeed, a new custom-designed premium economy seat. 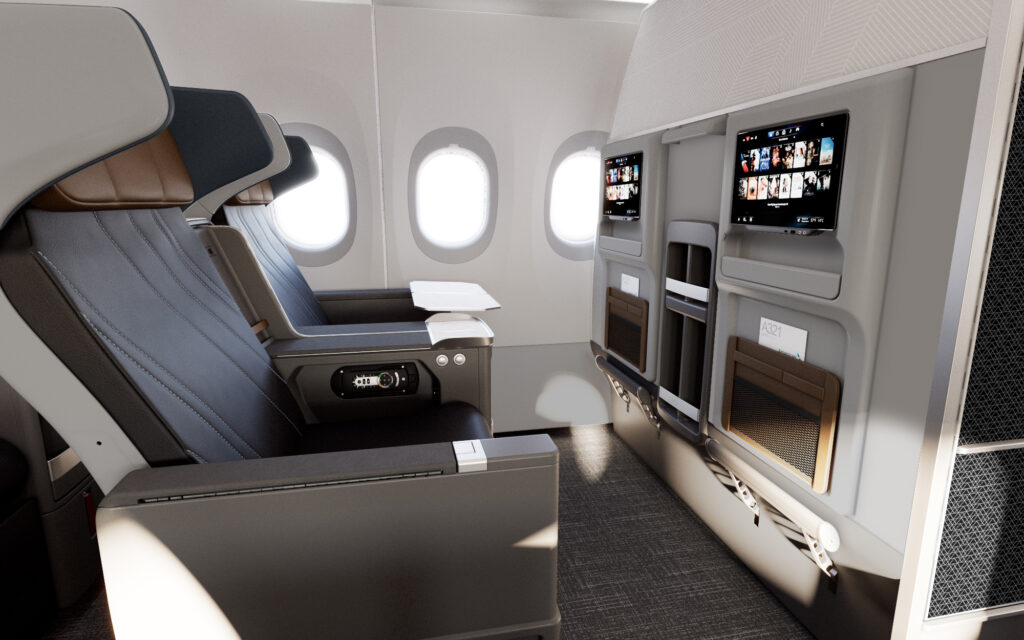 On the narrowbody side, American is installing a new inward-facing herringbone on its forthcoming A321XLR fleet. Notably, this product will replace its transcontinental A321T aircraft, which offer Collins Diamond in business and Safran Cirrus in first. Those aircraft will, it seems, be returned to the wider fleet.

The product is less clear on the A321XLRs, given the shape of the suite, the curve of the side table, the positioning of the lighting, the placement of the eye-level privacy divider, and the double-section door. It’s notable if this isn’t the same Adient product as the widebodies, not least because Adient does offer a narrowbody version of Ascent.

Is it a question of Boeing ownership of the Adient Aerospace product and approvals at Airbus? That would be a complicated precedent to set.

From the renders, the A321XLR hard product looks decent, with an interesting new circular cocktail table cutout on the side table perhaps the most notable feature.

In terms of a prospective business-plus section, things are less clear than the 787-9 renderings, with no changed door colour, and the row numbers not exactly matching up to reality in renderings in any case. We’ll be keeping an eye out. 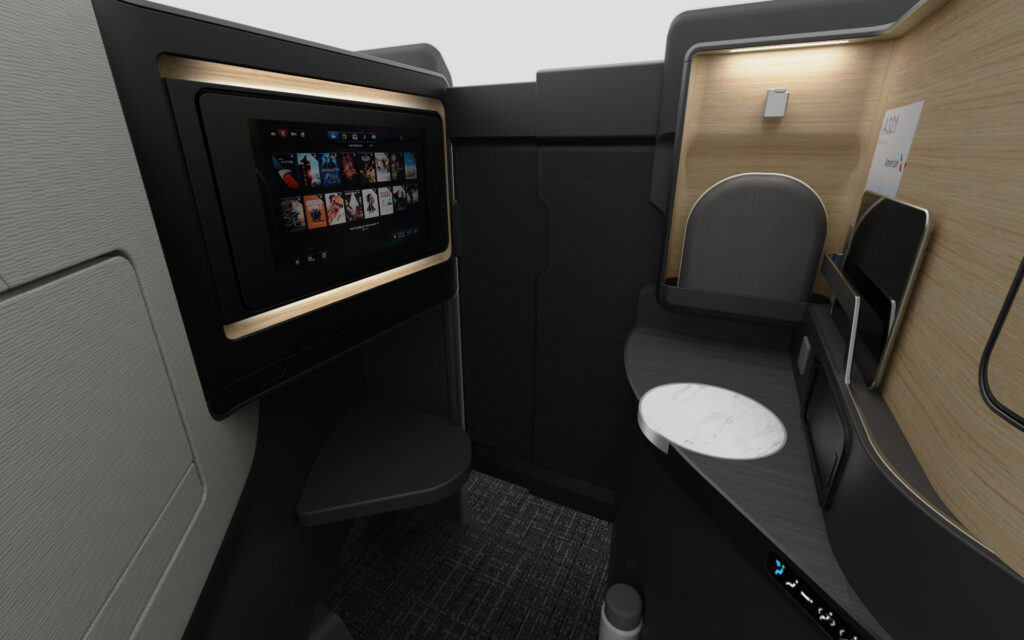 An aspect of note to the A321XLR seat is the inset cocktail table. Image: American Airlines

In colour, materials and finish, American is consistent — both studiously corporate and inoffensive with a muted set of beiges and greys and a light fake wood that your author reckons has all the interest of an oak veneer Ikea bookshelf. A point of interest is the red cheatline. 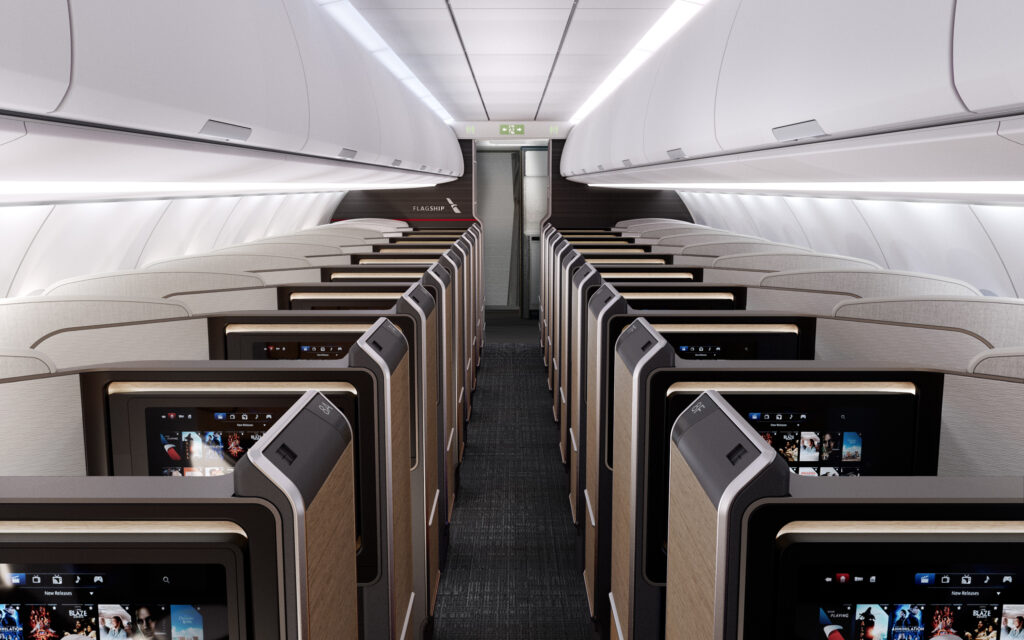 The Airbus A321XLR will have 20 Flagship Suite® seats when it is delivered in 2024. Image: American Airlines

Design partner Teague has real chops in this space — the Elevate cabin concept from earlier this year, for example — so it’s a tad disappointing that the palette here is rather bland with a red stripe.