Whenever a beautiful, stylish, innovative cabin concept appears, one of the disappointingly relevant realities that it smacks up against is always certification, particularly around how to ensure everything stays in place. Standard seat tracks often pose problems, but Teague’s new “Elevate” cabin, a veritable forest of residential bamboo, is answering this question before it is asked, with Nordam’s Nbrace composite seat attachment.

Nbrace attaches as an extended U perpendicular to the seat tracks, and the rest of the seat structure can be attached within the U. This enables the attachment points on the aisle and sidewall sides of the Elevate herringbone, higher up within the cabin. This distributes the certification crash-testing forces, allows for lighter seats, makes it all appear to float like invisible shelves, and enables a more spacious living space for the passenger.

And a more spacious living space is certainly on offer with Elevate, which transforms the idea of an outward-facing herringbone idea — on, it seems from the renderings, an Airbus A320neo family aircraft, and probably one of the longer range A321XLRs — into a floor-to-ceiling series of mini-cabins.

The general aesthetic is “bamboo forest”, with perhaps the most striking part of the concept the kind of vertical wooden separators popular in airline lounges and coworking facilities: not quite a wall, but adding privacy. It’s a pleasing, textured and natural material.

These slats are used to great effect in the small yet high-design Virgin Atlantic Clubhouse lounge in New York JFK, as well as the old Air New Zealand regional lounge in Christchurch, and it’s an interesting choice in the context of the ongoing doors/no doors debate for premium cabins.

One does have to wonder, however, about how much they weigh, especially since they extend to the bins — and, indeed, in the front row to a new concave bin that will allow less storage but give a more airy feel. 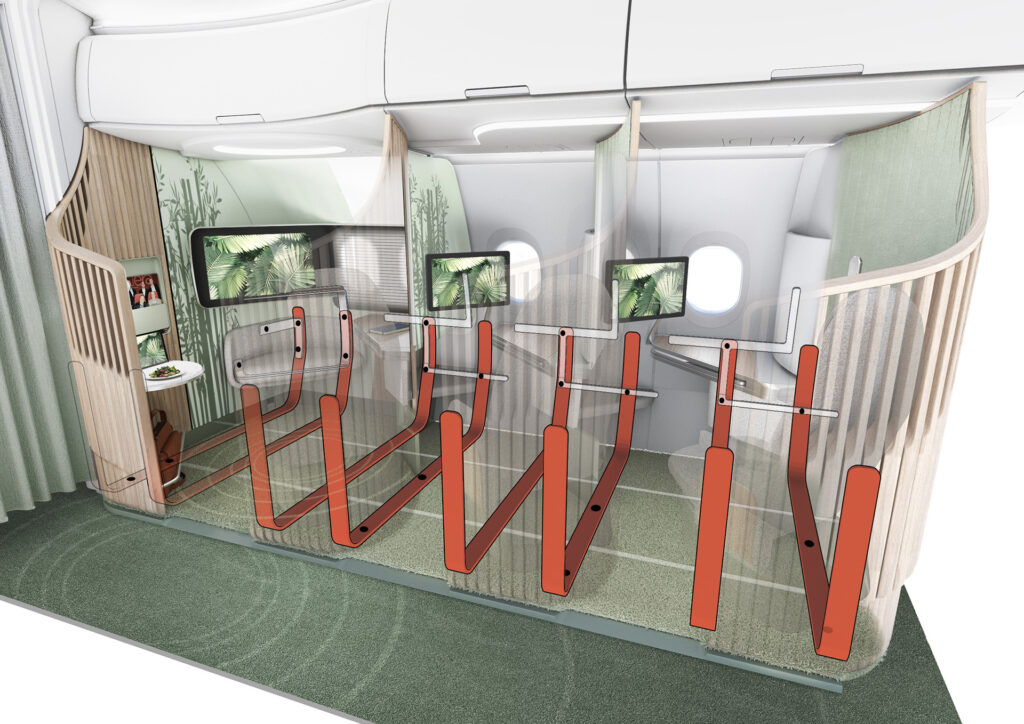 NBrace attaches the seat and structure to the sidewalls of the cabin. The key question is, however, why. Image: Teague

Next to these slatted screens is an expanse of what we presume is thermoplastic with a medium green bamboo motif over lighter green, a colour which is echoed in padding on the inside of the slats and by green, circular carpet with a plush pile.

Bang on trend, the front row is a business-plus space that takes all the room provided by the end of the herringbone overlay to install a very residential feeling marble-effect table with a light fixture above it on the aisle side of the passenger. 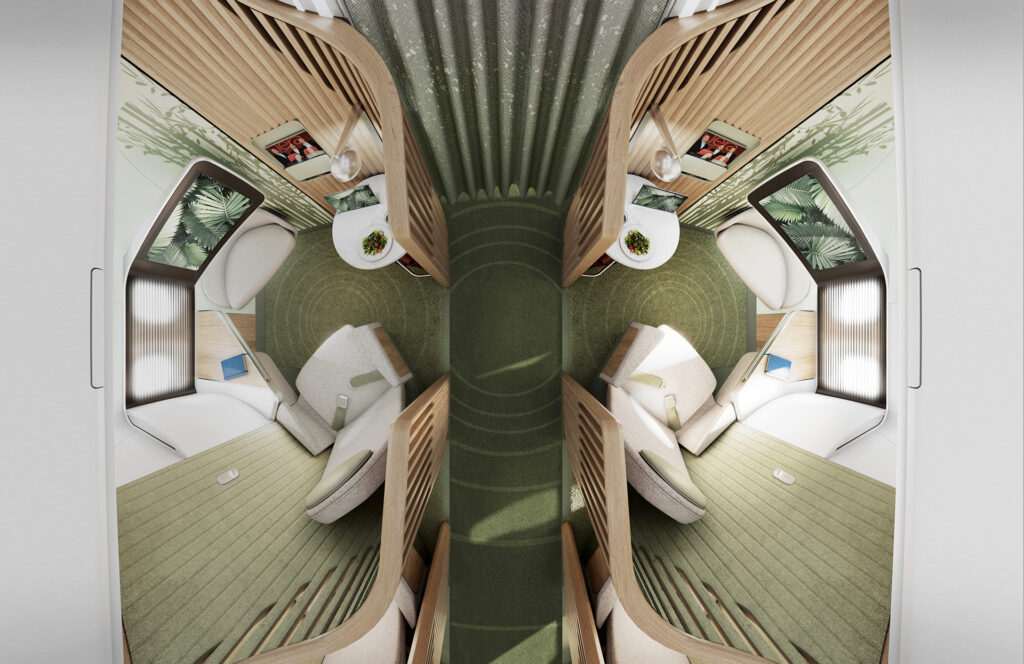 To the window side of the passenger is the more usual overlapping herringbone side console with table, underneath a double window featuring pleated panel blinds like many first class cabins. There’s a pleasing (if somewhat handwavingly nonspecific) integration between the double window and the large monitor that sits in front of the passenger.

The rows behind are similar in aesthetic but miss the marble table and the wrap-around window effect. 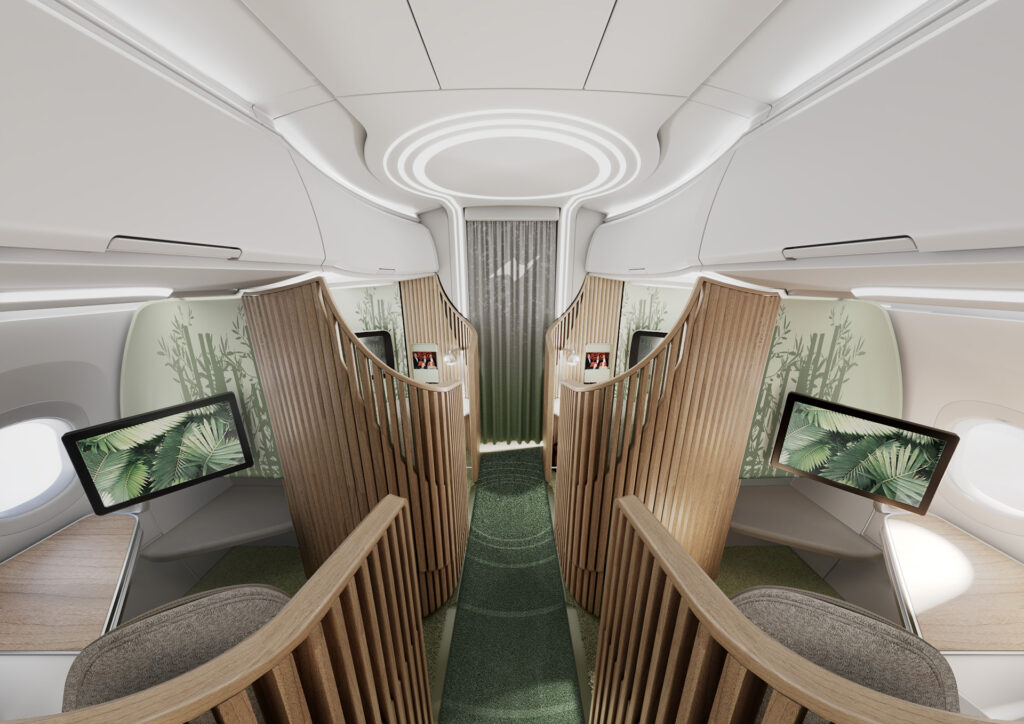 (One detail of note: popping up as a stark contrast to all this green is the red cover of Virgin Atlantic’s inflight entertainment magazine, Vera, and it doesn’t seem to be one of the recent issues. Seatmakers and design houses will often pop in a rendering of an airline’s house magazine as part of a sales campaign. I wonder if the concept has been shopped to Virgin…)

All in all, it’s a fascinating concept even without the NBrace attachment system but beyond the ability to do divider-height mounting — which is definitely interesting — even the corporate blog post  from Teague’s Ant Harcup doesn’t really answer the fundamental question about why you’d want to mount everything to the side.

The seat will clearly need to slide forwards or flip over. Your author thought that the flip-over versus slide-forwards question had been resolved — to meet the footrest, but it’s not clear how this is supported at floor level to ensure a stable and non-wobbly bed, or how this situation is better than mounting the seat at floor level.

There’s also the space question. Elevate is a very spacious-looking herringbone, but it looks massively pitched, which, if true, negates much of the argument for removing the floor attachments: in essence, if you’re going to make it this spacious, is the seat track really the constraining issue?

It’s also not immediately clear how many airlines will be keen to devote two or three inches of pitch each row, right in the critical path of seating, for the wood-effect slats.

The competition is hitting 33-34” seat pitch for inward and outward facing herringbones on the A321neo already, in the form of the Thompson Solo and Unum One.

Elevate is a beautiful concept, but it would be nice to see it more closely translated to narrowbody #PaxEx reality. 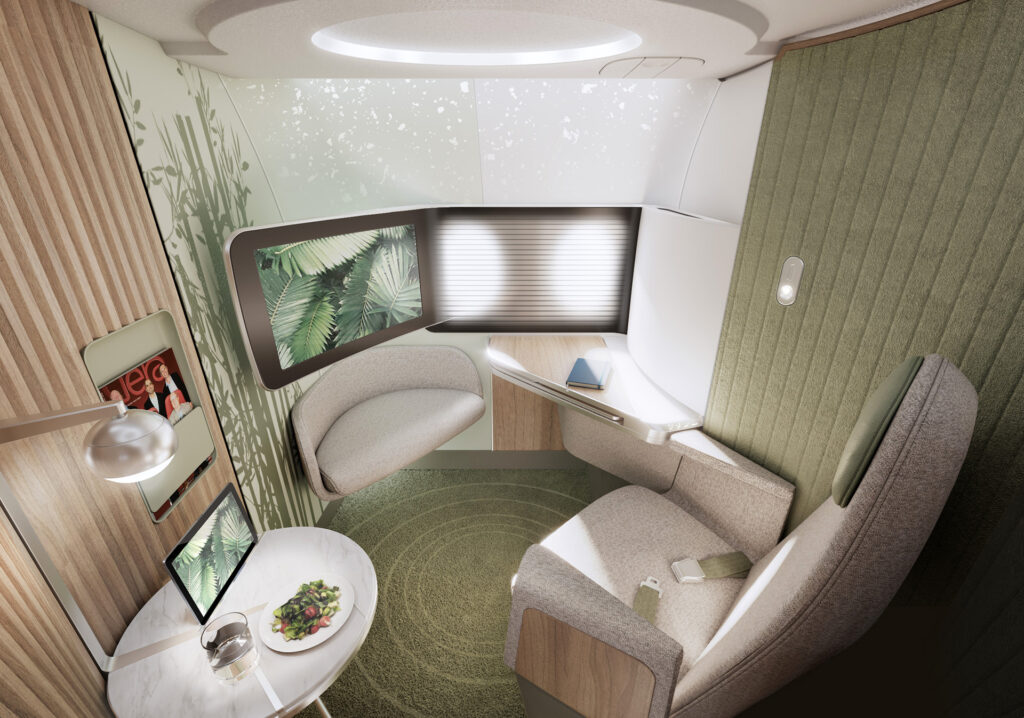 It seems from the renderings that Elevate is being contemplated here for an Airbus A320neo family aircraft, and probably one of the longer range A321XLRs. Image: Teague

Delta One suite aboard the A330neo remains solid PaxEx choice