As airlines begin to abandon empty middle seat policies adopted at the beginning of the COVID-19 crisis, passengers may crave a more private experience. The HeadZone-branded cardboard solution from Factorydesign offers a clearly defined zone for passengers’ heads. But the idea of introducing HeadZone to aircraft cabins raises questions about the logistics of distribution, product certification and cost.

For instance, while Factorydesign had initially considered HeadZone a retail product that passengers might purchase at the airport, it now reckons that the foldable, recyclable solution would be distributed by airlines as a complimentary item like blankets or pillows or sold for revenue gain like audio headsets. The understanding is that HeadZone would be stowed for taxi, takeoff and landing.

But it needs to be affordable for financially-ailing carriers. “Something that passengers could use and that airlines didn’t have to spend enormous sums of money, which they increasingly don’t have, to put in more permanent fixtures,” Factorydesign creative director Adrian Berry told Runway Girl Network.

HeadZone slips over the back of an economy class seat and folds out to immediately add privacy. “We wanted to try and do a quick, simple idea that was very passenger-focused. A simple solution that didn’t, in this complicated world of aviation, require lots of technical development,” said Berry. “It could be recycled and reused, and it could be made from recycled material.” 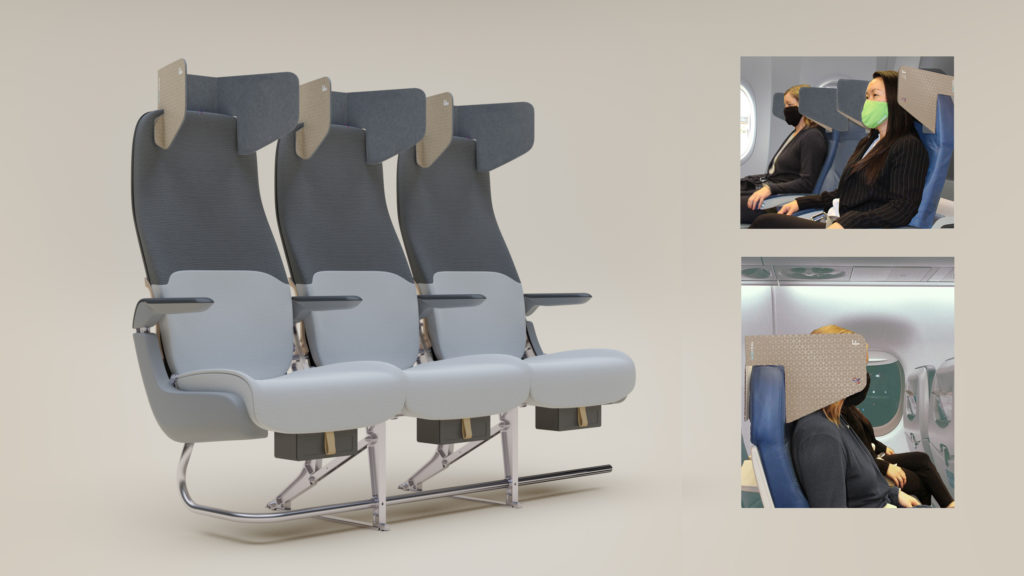 According to Berry, the advantage of HeadZone for passengers is an additional layer of security, on top of onboard HEPA filtration, the frequent exchange of cabin air and the mandatory use of face masks on board.

“Having something on either side of your head gives you a bit more feeling of security,” he suggested, describing HeadZone as being “like a wingback chair that you’re sitting in very simply and very easily and can provide you with a bit more emotional support if you’re very nervous about sitting next to somebody. I think a lot of people still are, even if they are wearing a face mask.” 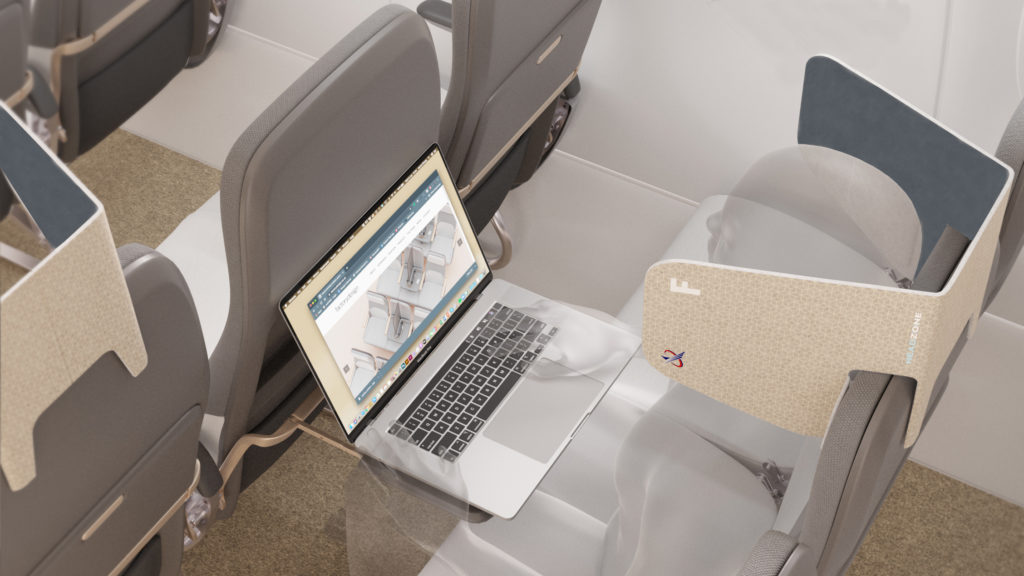 To bring the product to market, Factorydesign has partnered with Global Aviation to produce and distribute HeadZone. Global Aviation’s core business is sales and distribution of commercial aircraft parts and components. Together, they want to help build passengers’ confidence in flying and, independently, beyond the COVID-19 pandemic, to continue to create a personal ‘me space’ in busy crowded environments.

Herman Kooyman, president and COO of Global Aviation, explained that his firm’s interest was piqued after receiving customer queries about aircraft seat separation solutions. Global Aviation looked into a plastic polycarbonate divider which would have been easy to install, but heavier and more expensive.

“We saw that we had to go through a more lengthy certification process,” he told Runway Girl Network in reference to the plastic divider. “One airline said, ‘well, we might have to do dynamic testing.’” That wouldn’t be the case for HeadZone, assured Kooyman “It’s the operator who makes it part of the operating manual, like they do with a cushion, a blanket and the literature.”

Factorydesign and Global Aviation are seeking to avoid certification issues by developing the product as a lightweight amenity, which can be easily removed. It is believed it could be treated much like a neck pillow.

The two firms have also tried to address any perception that it might interfere with the personal space of others in the cabin. “The only thing that it does is hook over the back of the seat,” said Factorydesign’s Berry.

“We’ve tried to make it work within its own seat and its own passenger environment, with the minimal effect on the person next to you, or behind you, or in front of you. The point of it, of course, is to try and create a bit of separation from the person next to you, but it actually doesn’t stick out much further forward than your head. So, it doesn’t necessarily create more of a block than your head does.”

They’ve developed HeadZone to fit a range of different short- and long-haul airline seating options including those with headrests. “It became apparent quite quickly that we needed to look at how we could adapt it for [various seat types] with headrests and without,” said Berry.

Though the product concept is simple, there were still some variations to consider. And airlines which the partners approached have tabled their own requests. Kooyman said the price point may vary with airline customization and depends on the size of the production run, but would range somewhere from around $1.00 to $2.50. He believes that a price of over $3.00 might make it a harder sell. “It also depends heavily on what quantities an airline is looking for.”

The partners do expect that airlines will want to put their own branded touch and personality on HeadZone. “You can print it, and graphic it, and do what you’d like to do with clever printing. Nowadays, we can create textures and design details,” noted Berry. There are other options for coatings, including an antibacterial coating.

“If they do want to sell it, then they can maybe invest more in it, subject to a minimum order for a design,” continued Berry. “Or if it’s a low-cost carrier, and they just want to put some advertising on it, they can have the basic one. What we’re trying to do, even within the simplicity of it as a product, is give airlines options that they can buy into.”

The product might pay for itself or perhaps become a source of revenue through advertising space on the divider which could be sold to sponsors.

United impresses with accessible app for the blind