Is flying safe? Airlines and aviation trade groups would very much like passengers to think so, and have been focusing much energy on proving it.

But admitting uncertainty is complicated. Calculating risk is fraught with assumptions and interdependencies. And there’s no single panacea to safe travel.

The recent push by IATA, Airbus, Boeing and Embraer to attempt to persuade passengers that flying is safe has come in for harsh criticism by one of the scientific authors whose research upon which their work was based.

“They wanted me at that press conference to present the stuff, but honestly I objected to the title they had put on it,” Freedman told Reuters. “It was bad math. 1.2 billion passengers during 2020 is not a fair denominator because hardly anybody was tested. How do you know how many people really got infected?” he said. “The absence of evidence is not evidence of absence.” 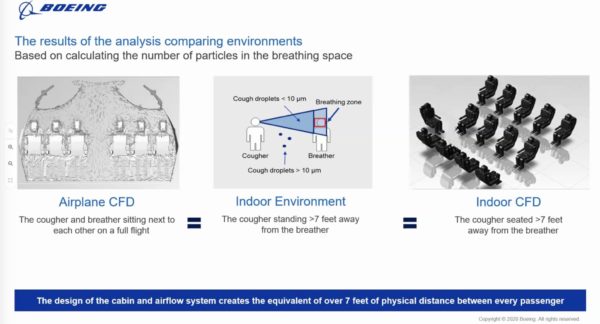 RGN has also been reviewing in depth the conclusions of research conducted by the Airliner Cabin Environment Research program, established as a centre of excellence by the US FAA in 2004.

Spurred on by the suspected inflight transmission of the 2003 SARS-CoV coronavirus, now named SARS-CoV-1 — currently used, along with influenza, as a proxy virus in research around the COVID-19 SARS CoV-2 coronavirus — a 2012 paper titled “Infectious Disease Transmission in Airliner Cabins” highlights a number of concerns about inflight spread.

The project modelled infection spread based on breathing, coughing and 15 seconds of talking by an infected passenger in a seven-row, twin-aisle aircraft that resembles a Boeing 767, together with the impact on spread of passengers and crew moving along the aisles.

Essentially, the conclusions were that proximity determines risk, but that the air systems also spread infection between rows. 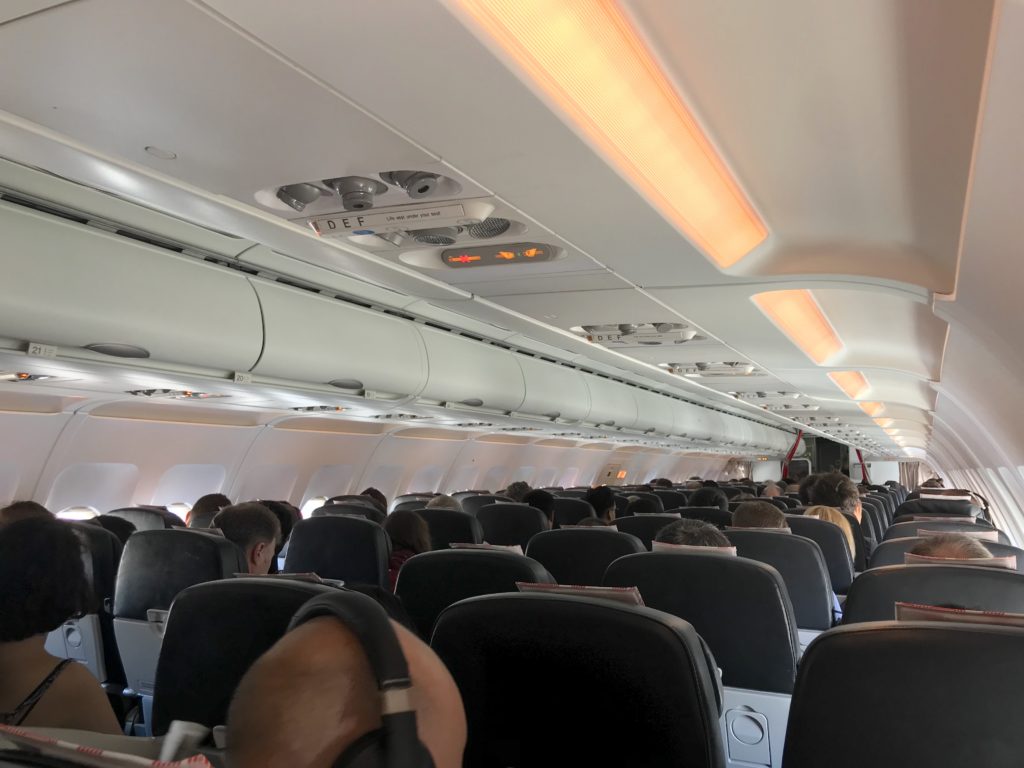 The study appears to contradict the line taken by some aviation stakeholders that air simply flows from vents at the top of the cabin to the outlets at the bottom.

Rather, ventilation systems and the heating effect of human bodies generate air rolls — something that more recent research has not grappled with — featuring strong up-and-down circular airflows that also spread forwards and backwards through the aircraft. 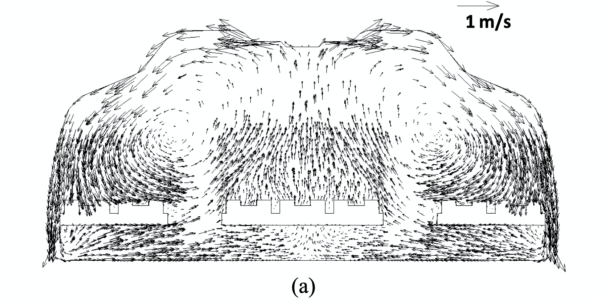 The behaviour of air rolls inside the cabin is still not entirely clear. Image: 5.1.1 a from Gupta, etc., 2012

The research noted that, “as the tolerance dose for the influenza virus RNA particles is not known nothing can be said on the infection risk to the passengers,” which is also true for the novel coronavirus SARS-CoV-2.

But the study did talk about relative risk with N95 masks — the usually tear-shaped filter kind recommended for wildfires rather than the fabric or surgical style most commonly seen in the COVID-19 pandemic.

The study explains that, if everyone apart from the infectious passenger is wearing one, an N95 mask “can provide a protection factor of 10, therefore the amount of influenza virus RNA particles would be 1/10th of inhaled without the masks”.

“If the index passenger also wears the mask,” the study noted, “the amount would be even lower.”

The researchers recommended that “the risk of infection for a scenario with passengers wearing masks should be evaluated”.

US military research grapples with risk, viral load and ventilation

Meanwhile, the US government has released a report written for the US Transportation Command, looking at commercial aerosol dispersion tests on United Airlines Boeing 777-200 and 767-300 aircraft. (It would seem logical that the latter would be an -ER version, though the former could be the non-ER or -ER version of the 777.)

This report, which acknowledges a dozen engineering staff of United Airlines and eight from Boeing in addition to an “aerosol test team” of researchers, has been released without being peer reviewed, while the authors assert it is “pending submission to a scientific journal”.

Information gained from this testing will be used to inform the US Transportation Command in its COVID-19 risk reduction planning for Patriot Express flights.

The research “indicates an extremely unlikely aerosol exposure risk for a 12 hour flight when using a 4,000 virion/hour shedding rate and 1,000 virion infectious dose,” when masked, but the US CDC is clear that a key unknown about COVID-19 is the question: “What is the infectious dose for SARS-CoV-2 (how many virions are required for infection to occur)?”

But there is also the fundamental question about the credibility of non-peer-reviewed research carried out by entities intertwined with the aviation industry.

Again: this kind of research needs to be conducted by scientific institutions — the CDC or ECDC, for example, or independent academics.

Fundamentally, the COVID-19 risk posed by aviation isn’t simply about whether people catch the disease on the aircraft. It’s also about the movement of undetectably infected people around the world, especially where quarantines are non-managed or non-existent.

In New Zealand, with some of the strictest and best-managed quarantines — where essential arrivals are basically locked into dedicated hotels — nearly two dozen Russian and Ukrainian fishermen, who make up a regular essential offshore fishing industry workforce, have tested positive in a managed isolation facility after arrival on a chartered Moscow-Singapore-Christchurch flight.

This comes despite stringent pre-departure protocols, which the NZ director-general of health has confirmed included pre-departure testing.

Airlines and airports looking to pre-departure testing as the new #COVID19 silver bullet.

But today in NZ, 18 out of 400 Russian/Ukrainian deep-sea fishermen flying MOW-SIN-CHC — tested negative before departure — have tested positive, with more expected. pic.twitter.com/sqciIGM6x5

And it’s not the first time passengers who were not detected positive pre-departure have later tested positive after entering managed isolation on arrival.

NZ's Dr Ashley Bloomfield is very clear that pre-departure testing is NOT picking up all cases of #COVID19, and that it is regularly picking up positive cases in managed isolation three days after arrival. pic.twitter.com/A5Y46qise5

Separately, a new report has emerged from Eurosurveillance linking a large national outbreak of COVID-19 in Ireland to air travel.

Eurosurveillance is published by the ECDC in Stockholm, Sweden. “Fifty-nine laboratory-confirmed cases of COVID-19 from six of the eight different health regions throughout the Republic of Ireland were linked to an international flight into Ireland in summer 2020,” states the report, which is now being reviewed in depth by RGN.

Returning to the wider picture, science seems broadly in agreement that wearing masks and taking sensible hygiene measures reduces risk. But the jury is still out on whether that risk starts at high, medium, or low.

It takes bravery to admit that the true picture is unclear, and that’s especially true when lives are at stake while economic pressures come to bear.

We are still waiting for an airline or trade association to admit honestly that they don’t have all the answers around spread or infection, that there’s good evidence that a range of measures reduce risk, but that the safety of air travel — and indeed the effect of transporting people around the world — remains to be proven.