If we are to believe Airbus, Boeing, Embraer and airline trade group IATA — which last week conducted an unprecedented joint briefing on the SARS-CoV-2 coronavirus’ spread and modelling in the aircraft cabin — people shouldn’t worry about catching COVID-19 in the air.

Fundamentally, aviation’s link to COVID-19 isn’t solely about whether people are catching SARS-CoV-2 on the aircraft. It’s also about whether airlines are ferrying infected people around the world. Moreover, while some countries are requiring arrival quarantines or testing, or pre-departure testing, many are not.

IATA’s analysis mostly covers the early pandemic, prior to mask mandates. For example, research on cabin transmissions from early March (the Choi-authored research quoted by IATA) is only now in “early release” in a November-dated journal. 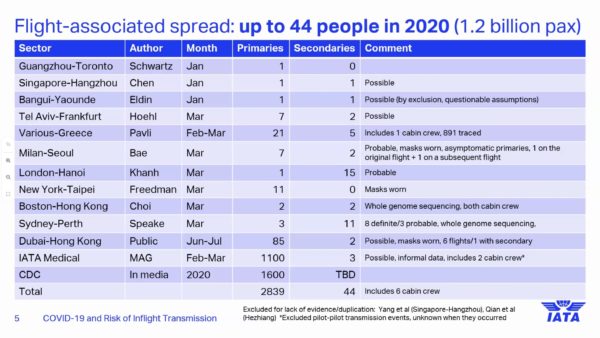 It’s hard to see how this collation of research reflects the whole epidemiological picture even at the time. Few countries are tracing contacts or sequencing viral genomes to an extent that we might be able to find out.

New Zealand, usually held as the paragon of COVID-19 response, is at the time of writing citing 40% of its total cases as imported, and a further 25% as related to imported cases. Australia, meanwhile, which has extensive local and community transmission but also hard quarantines, cites a 20% overseas source rate. Neither delves down into the actual location of overseas virus infection.

On board, the statistics rely entirely on full-cabin masking. But of course some passengers can’t wear masks, and passengers are allowed to remove them to eat and drink.

On the airframer side, the three manufacturers have been doing airflow modelling, mostly computer-generated, and drawing conclusions around particle size and infection likelihood as a result. None of the three provided any evidence or names of independent scientific or medical involvement, verification or review.

Nonetheless, among other conclusions, Boeing concluded that, if masked, “the design of the cabin and airflow system creates the equivalent of over 7 feet of physical distance between every passenger”. This once again assumes full masking, all flight. 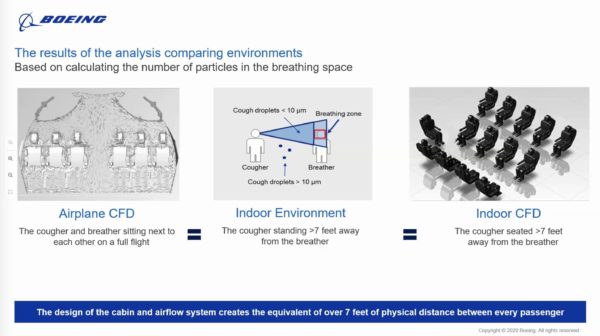 Across Airbus, Boeing and Embraer, too, the modelling used seems simplistic. Some does not appear to take into account individual air nozzle gaspers — on which design house Teague has been doing work separately — while there was notable difference of opinion between the airframers around the extent to which gaspers contribute, are a positive, or are a negative, from an infection control viewpoint.

Further, there is no evidence of air rolls — where ultrafine particles circulate in spaces like aisles and overhead — being accounted for in this research, and questions on the subject were not addressed.

The US CDC recently acknowledged that SARS-CoV-2 can be spread via aerosol transmission in addition to droplets, noting especially circumstances like enclosed spaces and prolonged exposure.

Some physical modelling using stand-in particles has been included. But attempting to model distribution patterns of a virus whose aerosolisation is not yet known raises eyebrows. That’s particularly true given that, in the 2004 SARS outbreak of the coronavirus now known as SARS-CoV-1, a major outbreak cluster resulted from aerosolisation through bathroom drains, and indeed bathroom transmission of the COVID-19 coronavirus, SARS-CoV-2, is the subject of existing and ongoing research. 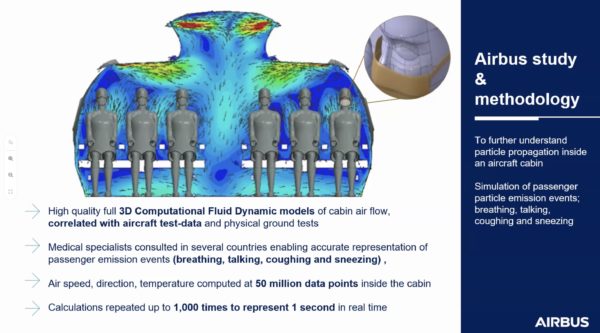 At the end of the day, airlines have done much to minimise the spread of SARS-CoV-2 and the likelihood of catching it on board, whether that’s mask mandates, lower-contact service protocols, capacity controls, and so on. And for its part, IATA has called on the world’s governments to deploy pre-departure testing.

In a joint statement, IATA and the Airports Council International (ACI) World, say: “Safely re-opening borders without quarantine by using a coordinated approach to testing would boost the entire economy and be a revenue lifeline for airlines and airports.

“ACI and IATA have called on the ICAO Council Aviation Recovery Task Force to provide an internationally agreed and recognized approach to testing that can be adopted at a national level.”

But in the meantime, airlines and airframers must take care not to mark their own homework on COVID-19 cabin safety.

This research needs to be carried out by independent scientific institutions — the CDC or ECDC, for example, or independent academics not funded by the aviation industry.