Air China has replaced Collins Aerospace as its business class seat supplier for its Airbus A350 aircraft, unveiling a new full-aircraft set of Recaro seats in business, premium economy and economy.

Up front, the business class is the staggered and slightly angled CL6720 fully flat bed with direct aisle access. An evolution of the earlier CL6710 seen on several airlines including El Al’s Boeing 787-9 and TAP Air Portugal’s A330neo, the seat is one of the newer generation of compact staggered seats. Air China also selected the Recaro PL3530 and CL3710 for the A350’s premium economy and economy cabins, respectively.

The new business seat looks fine, if somewhat unexciting from a nuts and bolts point of view. It’s not a huge upgrade over the Collins Super Diamond business class seat that Air China installed on its previous A350 aircraft — with the exception for passengers travelling together, who can benefit from the “honeymoon” seats right next to each other in the centre of the aircraft. While these do not create a full double bed, they are superior for chatting and improve the #PaxEx for premium leisure passengers and travellers on blended “bleisure” trips with their partners.

Recaro calls this product a “minisuite in the sky”, but key to the definition of a mini-suite, both by common industry parlance and by regulatory designation, is the presence of a door. CL6720 comes with options for or without a door, and there does not seem to be a door either in the images provided by Recaro or in the images and renderings on Air China’s minisite for the new product. A Recaro spokesperson confirmed to Runway Girl Network that the seats do not feature a door. 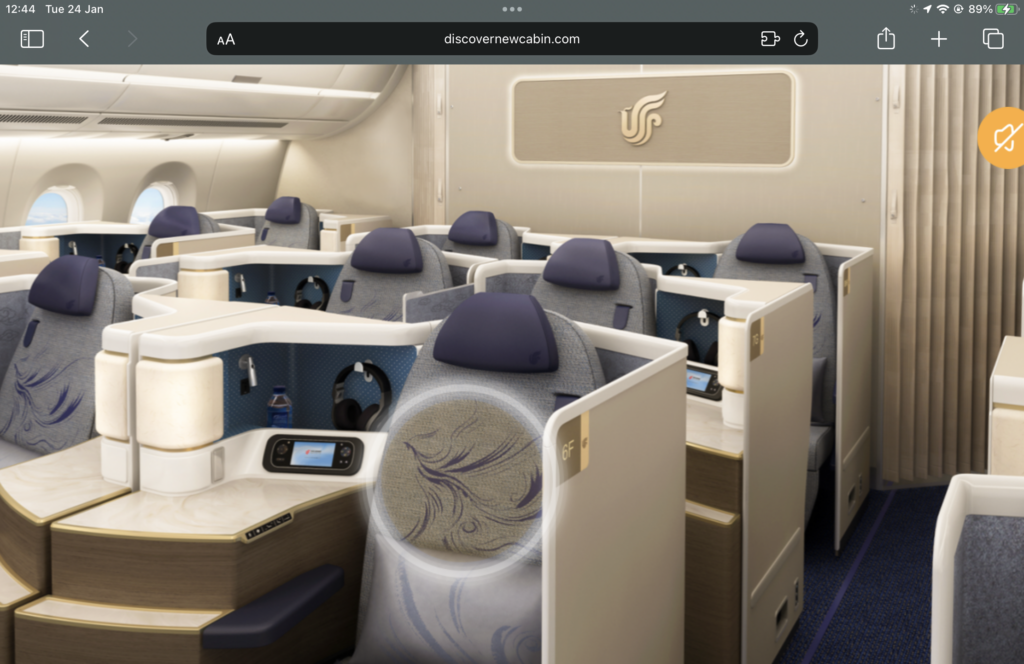 Air China’s microsite offers what looks to be an early rendering of the cabin concept. Image: Air China

(On the topic of that Air China minisite, it should be noted that it is something of a mishmash of various products and classes of service, with both previous first class and previous business classes shown at times, as well as renderings of this new product that have visible differences to the photographs supplied by Recaro. RGN is thus refraining from relying too heavily on it as visuals of the end product.) 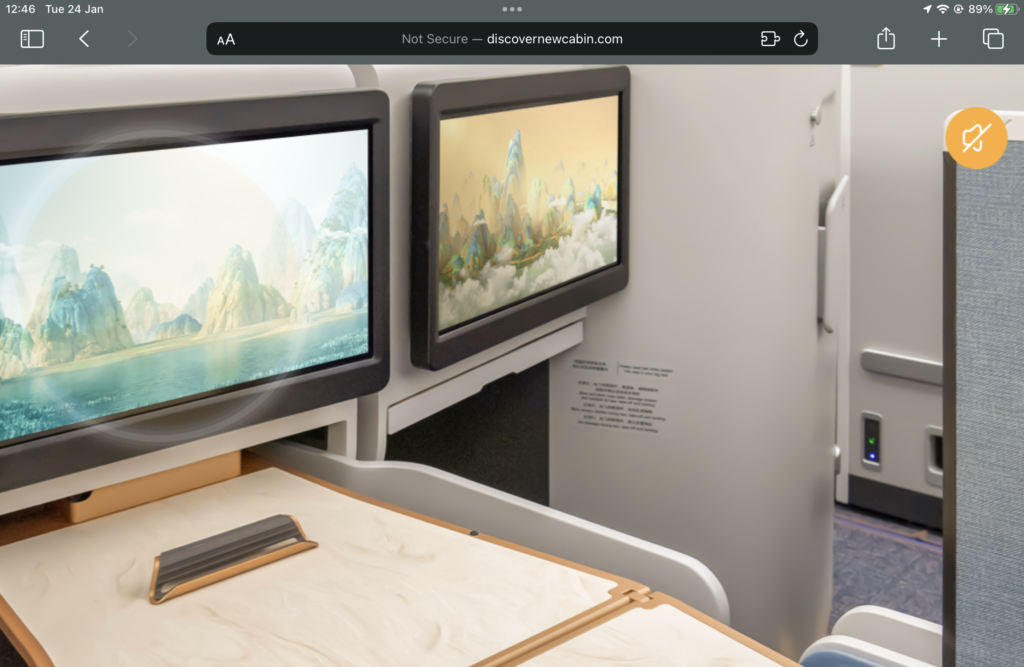 It’s not clear to what extent this rendering represents the final product. Image: Air China

Taken as a whole, the look and finish is certainly an improvement on previous generations of Air China product, using motifs such as the phoenix — present in another form as the airline’s brand logo at the rear of the cabin on the tail of the aircraft and notionally spelling the letters ‘VIP’. 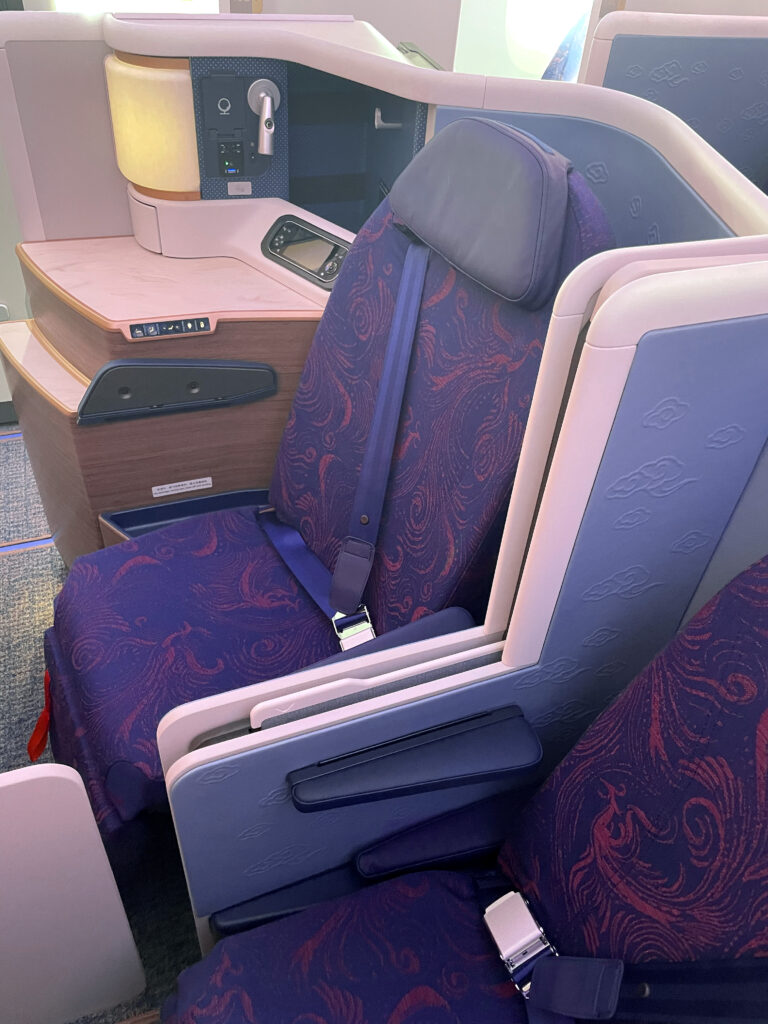 Overall, the product is an improvement for Air China, at least in terms of look and feel. Image: Recaro

A new cloud motif is featured in the “inner soft-touch back-shell” shrouding, while the complimentary blue dot pattern in the side storage area brings together an overall blue palette that marries well with the medium wood effect on the vertical surfaces of the side table, the cream marbled effect on the horizontal surfaces of the side table (and, on the minisite, the main table), and the almond gold at the corners. 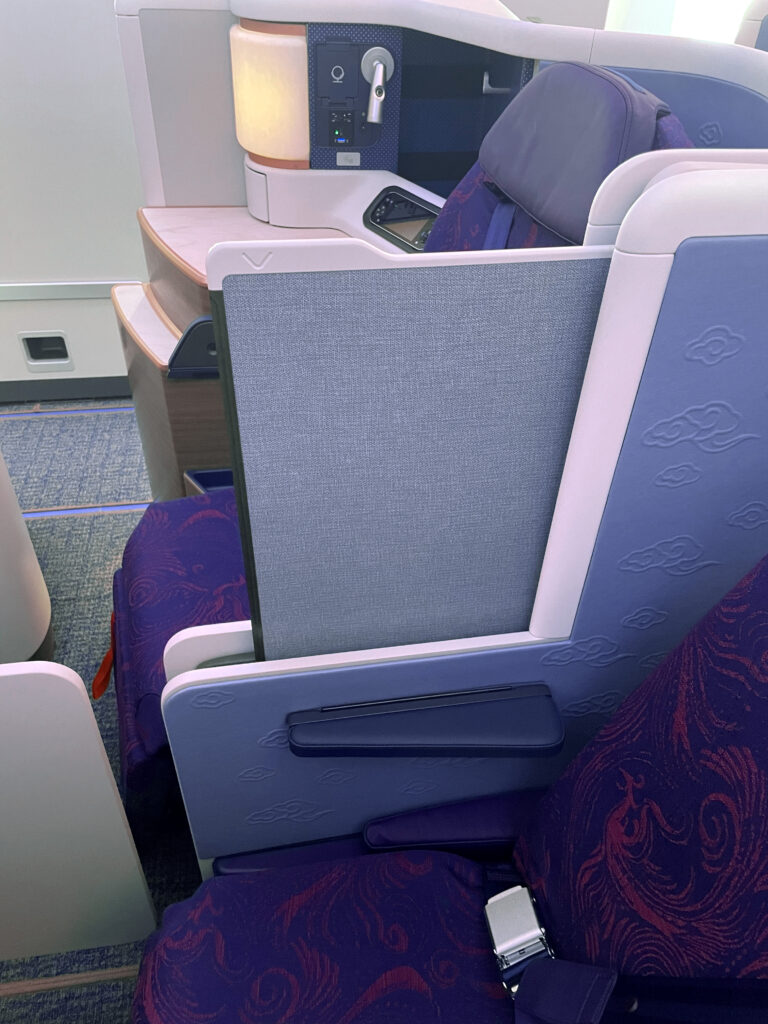 The many blues used form a palette that is, on balance, mostly cohesive. Image: Recaro

Particularly attractive is the side light with its diffuser shade, which is an excellent touch. Air China says that this is “inspired by the shape of ancient Chinese lanterns, combined with the shape of traditional Yunlong rice paper, embellished with almond gold and quicksand white”. 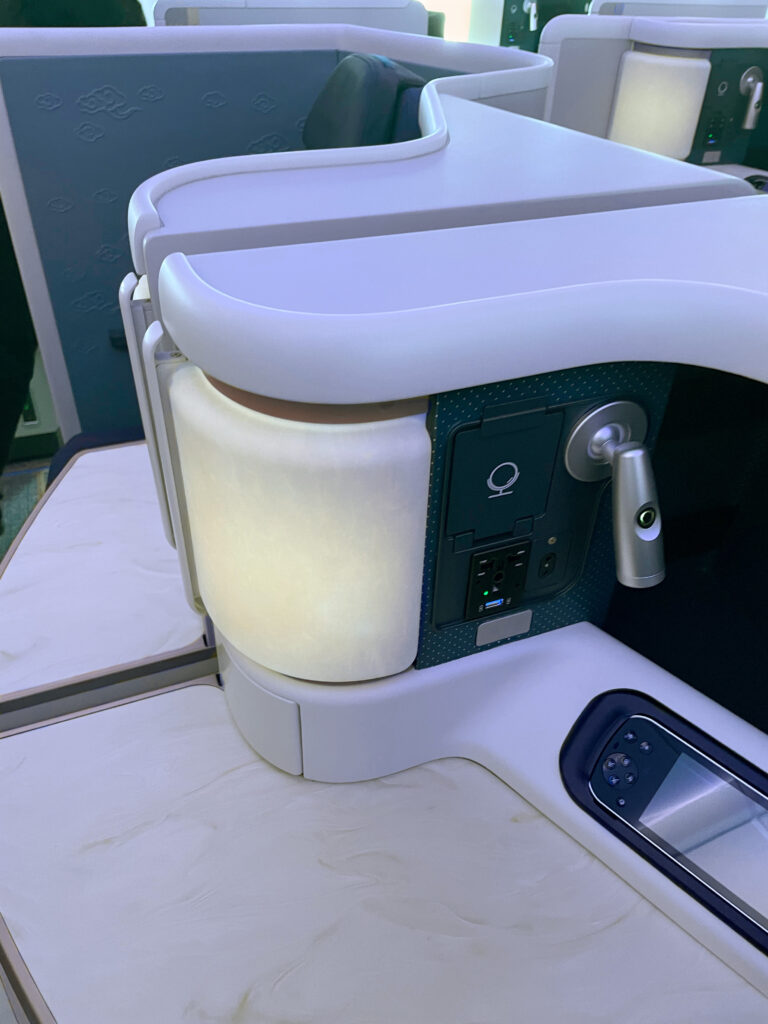 The new lamp is an attractive touch. Image: Recaro

Other embellishments include appears to be a small spring-open mini-tray for storage, which we presume is what Recaro refers to as a “uniquely-crafted drawer”.

RGN presumes this is released by the button beneath the lamp. Also in this area sit the power supplies, and it’s interesting (if a bit odd) to note that the only USB socket is an older USB A outlet.

For Air China, the new seats and the associated design are relatively good. The airline comes with a substantial amount of brand history, from the VIP-phoenix to the wordmark calligraphy by Deng Xiaoping, yet its branding and presentation have not kept pace with modern times — nor indeed with modern China. It will be instructive to see how the airline’s passenger experience continues to evolve within these strictures.

For Recaro, the seatmaker has secured a full-aircraft order over three cabins, in business, premium economy and economy.

It’s not Recaro’s first three-cabin win — El Al’s 787-9 is all-Recaro, as are the business and economy seats on TAP’s two-class A330-900neo — but being able to offer a nose-to-tail seat option is clearly growing in attractiveness to airlines, and seatmakers are looking to offer it.