Recaro’s CL6710 is one of the late 2010s-era compact staggered business class seats, alongside products such as the Safran Optima and Stelia Opal. By and large, these seats are engineered for the lower end of the market where airlines were offering angled lie-flat seats or early fully flat beds without direct aisle access. And, by and large, that’s where they have remained, on carriers including United Airlines, Air France, Air Senegal, El Al, and in this case, TAP Air Portugal.

The airline experienced early quality teething problems with the seat, which are of course not entirely expected with a new seat plus a new cabin on a new aircraft. TAP agreed to launch the CL6710 — and indeed this aircraft and its Airspace cabin — back in 2016, but delays to the A330neo’s engines meant that the product ended up launching on El Al in 2017.

On my first post-pandemic longhaul, my partner and I put the CL6710 to the test on the longhaul return flights from London to Miami via Lisbon, for which we paid just over GBP1100 (just under USD1500) each all in.

At that price, my expectations were set realistically: I was hoping for a product comparing favourably to its premium economy-level pricing, but not matching the more impressive business class offerings aboard the more expensive competition in terms of space and comfort.

The aircraft we flew were both A330-900neos, one delivered in early 2019 and one towards the end of that year, so both roughly in the middle of TAP’s fleet of 18 of the re-engined widebodies. I therefore imagine that any early teething problems with the hard product were ironed out. 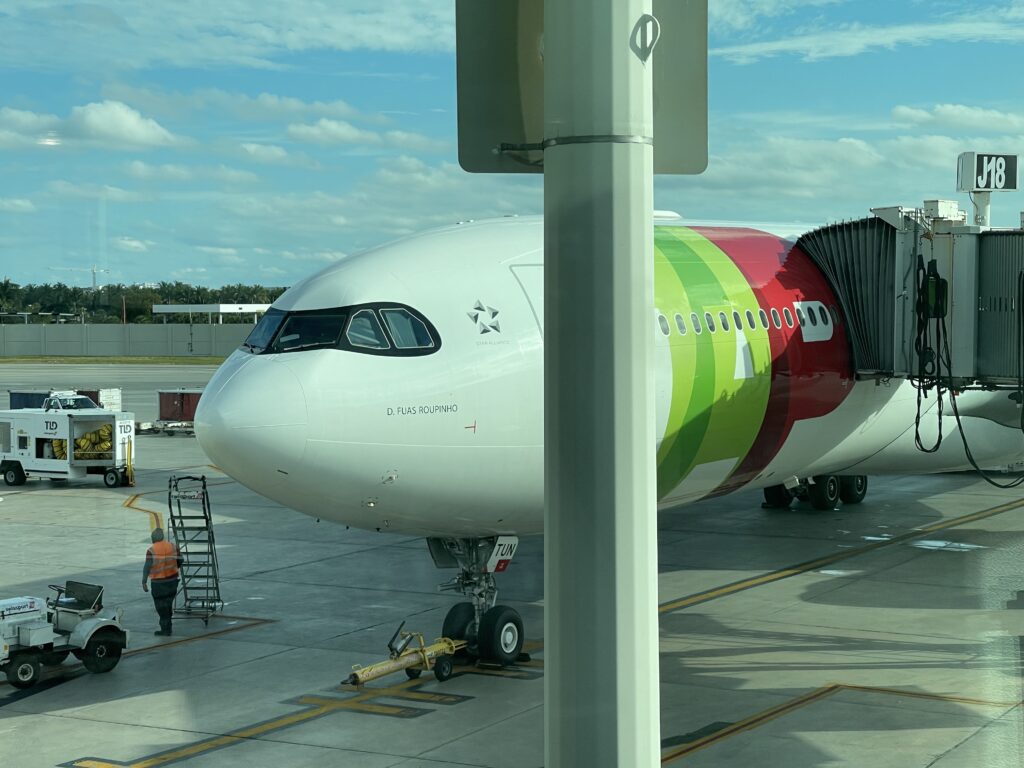 Entering the cabin from door 2L for the first time in the Lisbon morning light, the overall impression was quite beige, and indeed it is. TAP has done a reasonable job to brighten things up the lime green accents in moodlighting, pillowcovers and the colour inside the small shoulder stowage bin, but these aren’t really enough. 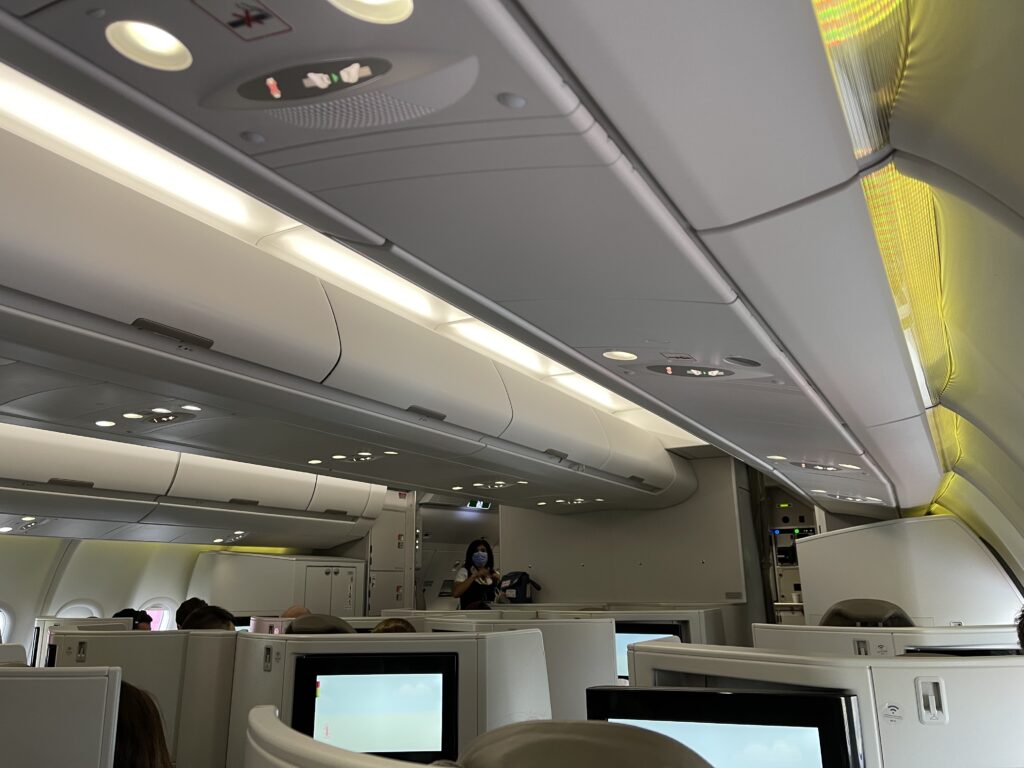 The cabin is very, very beige, and even the mood-lighting can’t rescue that. Image: John Walton

Some additional pops of colour would make a big difference: the deep green within the brand palette as the leather headrests, something bolder on the seat fabric, or a deeper brown as the internal side of the headrest shroud, perhaps?

That said, the cabin was in good nick, which was above my expectations given early complaints about fit and quality. The only flaw I noticed was a delaminating strip on the side console, which in fairness is a hard ask: this is a curving corner and a high-touch area. The seat mechanics, too, were a little ropy:  it’s a classic move-forward-then-recline mechanism, but both of us found it a bit temperamental. 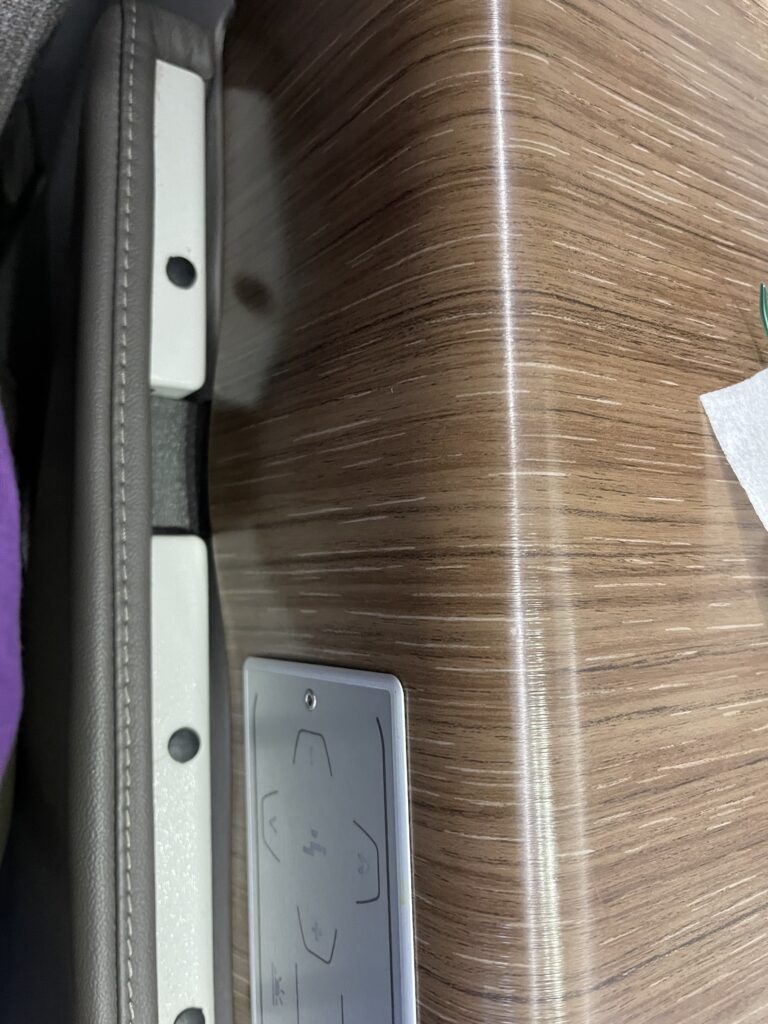 The only piece of CMF wear and tear I spotted was this, an unglued laminate on the side console above the armrest. Image: John Walton

The seat itself is as expected: compact and staggered. It fits, just about, on the A330’s narrow frame, but the zero-sum problem with the aisle-side seats of the staggered layout are particularly noticeable.

On the day flight to Miami, both of us picked window-adjacent seats to avoid the aisle-side disturbance, and on the overnight return we selected a centre pair. We were in the “honeymoon” pair right next to each other. 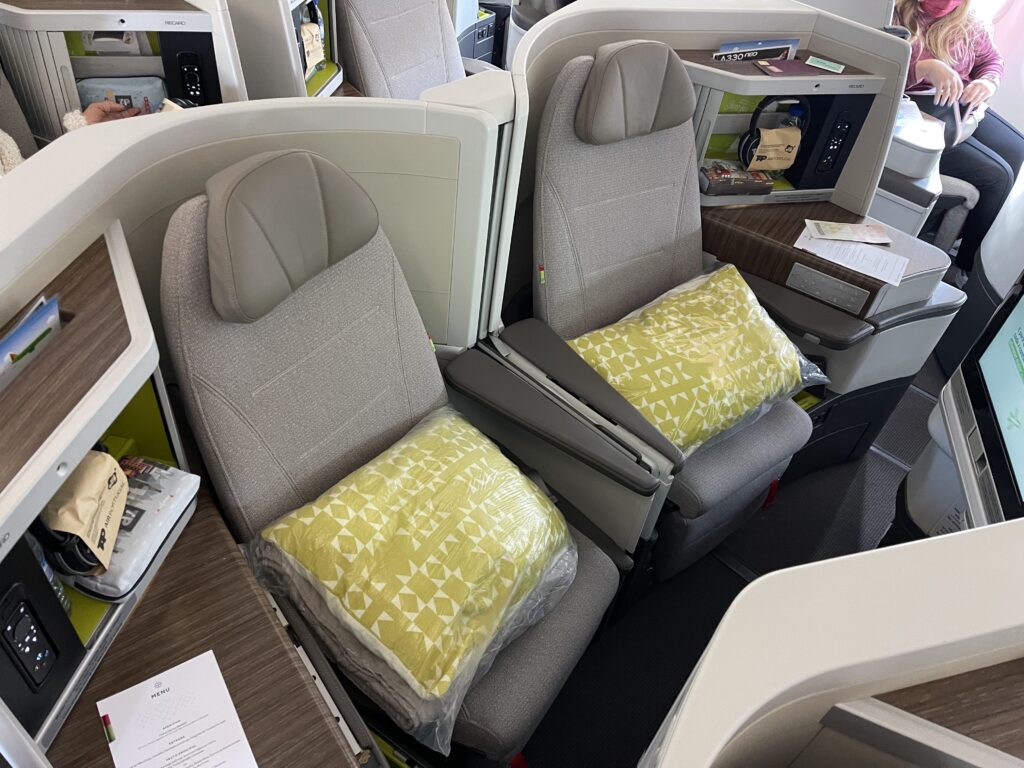 The centre pairs are excellent when travelling with a partner. Image: John Walton

However, the elderly couple in front of us (who I presume are exactly the kind of upmarket leisure travellers TAP is aiming for) were surprised to be separated from each other by the two side consoles — they were in the “divorce” pair that are separated by our feet — suggesting that TAP could do more to explain this to passengers.

Surprisingly, the centre pair felt noticeably more spacious than the window-adjacent seats in the footrest area, but even that was still tight. Neither of us (me 6’3”/190cm and round, him 6’4”/193cm and less so, both with UK 12/US 13 size feet) felt that the window-adjacent seats offered sufficient knee and foot space to recline to flat, either for side sleeping or back sleeping. 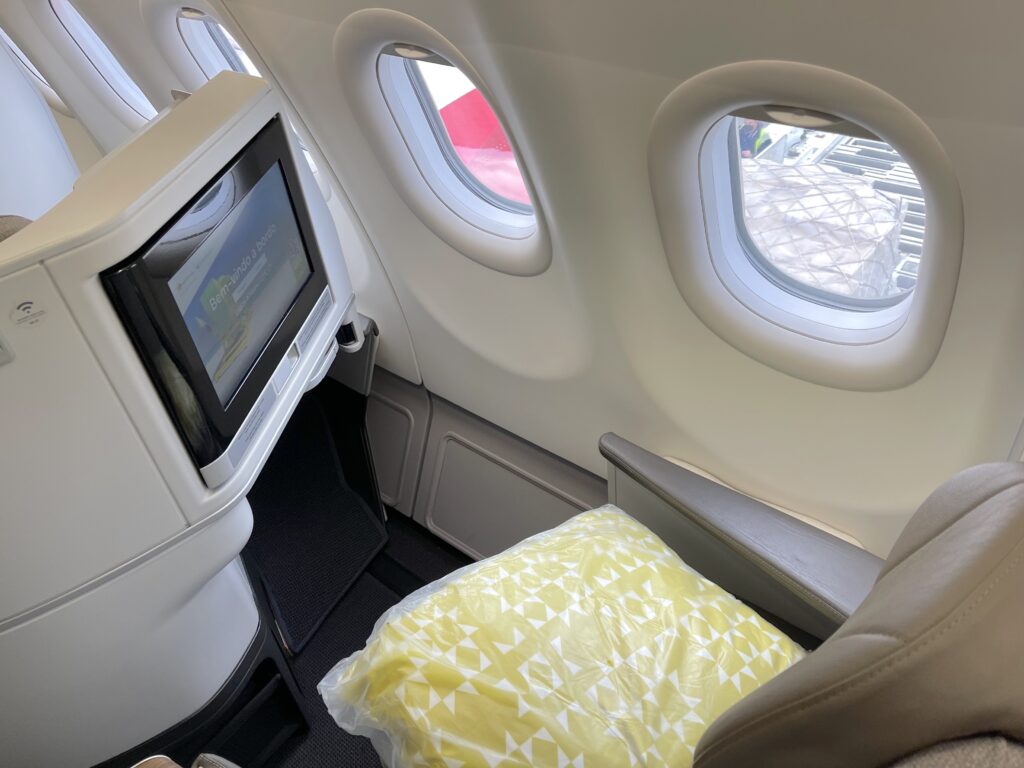 Notably, the side of the footwell cuts off several inches from the cabin sidewall. Image: John Walton

The centre pair was a bit better — perhaps because of the extra shared space from the two seats next to each other — but neither of us would call it spacious. I suspect this problem could be fixed by adding some pitch, but that would rather defeat the object of the compact staggered idea. 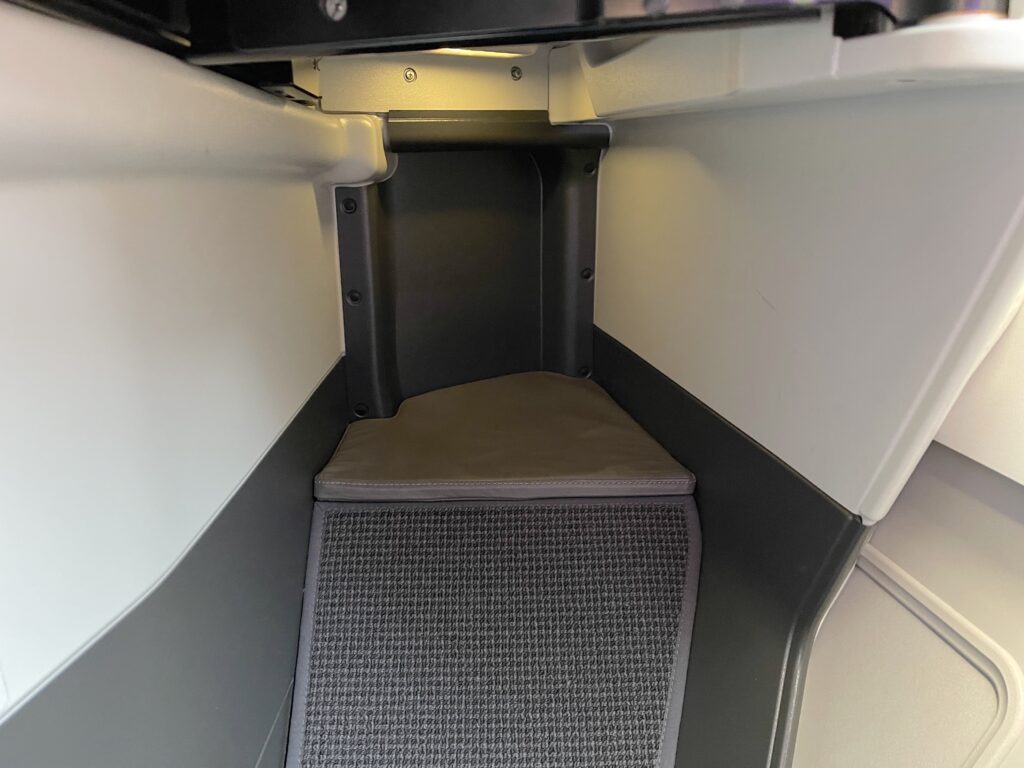 Given the amount of space in the footwell, it was surprisingly confining. Image: John Walton

Going to sleep next to each other was lovely — saying goodnight right next to your partner and being able to drape an arm over them in “cuddle class” mode is simply charming — but the lack of centre divider below the waist means that this would have been uncomfortably close to a stranger. 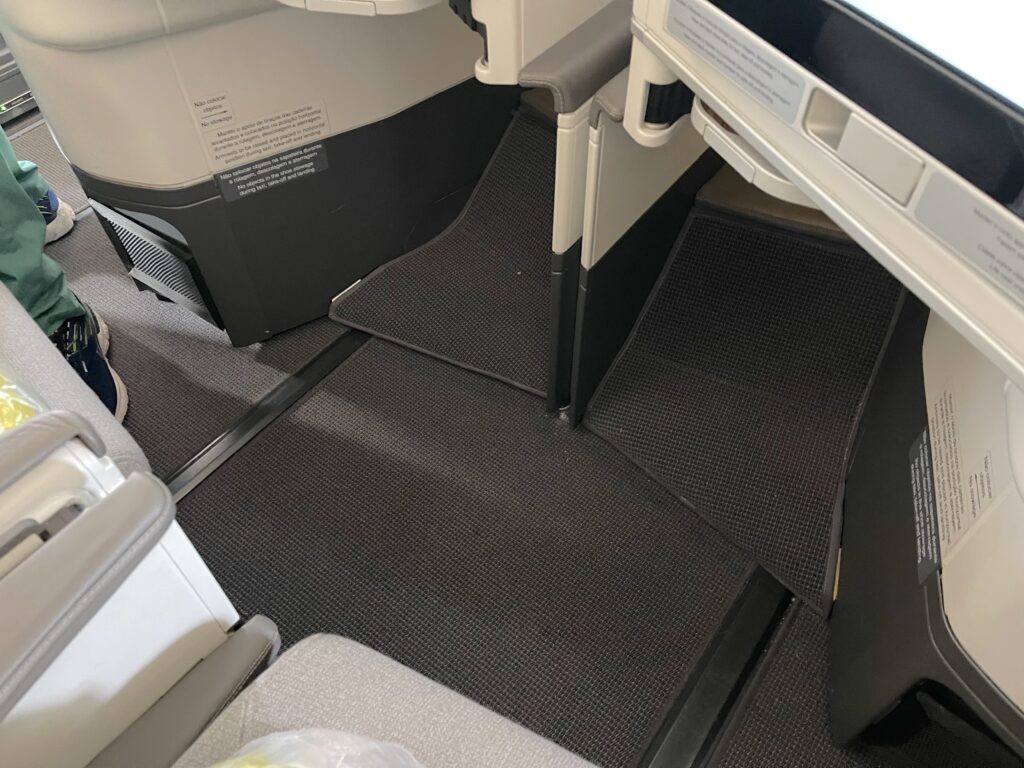 It’s not quite a double bed thanks to the footwell and centre sections, but it was better than many in terms of the “cuddle class” factor. Image: John Walton

And, unfortunately, TAP kept the cabin very warm. Combined with a 4:25pm departure from Miami, and the lack of space within the seat for sleeping, that meant we got only a couple of hours on the overnight, making Lisbon’s ropy connection less than ideal.

Bottom line: this seat was brilliant for the premium economy price we paid for it. But the seat, and the wider experience, is marketed as business class, and I imagine that TAP, which doesn’t offer a premium economy product (its middle offering is just an extra-legroom economy section of regular economy seats) would very much like to be able to price it as such.

And there’s the rub, particularly for the relatively price-sensitive premium leisure traveller.

While the service was great and the soft product was certainly business class level, with the exception of the lack of Champagne, I’m not sure how much more than the £1100 we spent I would have been willing to pay for it.