Of all the business-plus front row products trickling out of design houses, seatmakers and airline passenger experience departments recently, Virgin Atlantic’s A330neo Retreat Suite, based on the Thompson Vantage First product and derived from Vantage XL+, was one that really posed questions. Would this sexy and glamorous airline manage to create a space that really elevated the #PaxEx above its Upper Class?

Virgin, which hosted your Runway Girl Network journalists on a media trip to Tampa for the inaugural flight of the route and the aircraft launch, allocated us the Retreat Suite on our return flight, two days after the “official” return and thus on a regular revenue flight. More so than anything else, the experience poses some substantial questions about designing the details of these front-row business-plus products within the industry.

The airline’s app was offering the product for an additional 200 pounds (some USD240 at the time of writing) over the business fare. This is a business-plus market positioning rather than a first class one, and is sold as such, like an economy passenger would buy an extra-legroom seat.

On arriving in the cabin, in terms of CMF (colours, materials and finish) the seat was not markedly different from the rest of the A330neo Upper Class cabin. But the massive difference was the amount of space available: the amount of openness to the monument at the central front of the cabin felt remarkable, and much more akin to a compact first class seat. The large Safran RAVE inflight entertainment monitor was very impressive indeed, and the blue-white-red abstract John Horsfall cushion was a nice touch.

What was striking, however, was that there was a substantial amount of wasted space within the two suites. There seemed to be little benefit to the small extra storage bins — neither would take anything more than a small handbag — around the ottoman areas given that Virgin selected overhead bins for these aircraft. 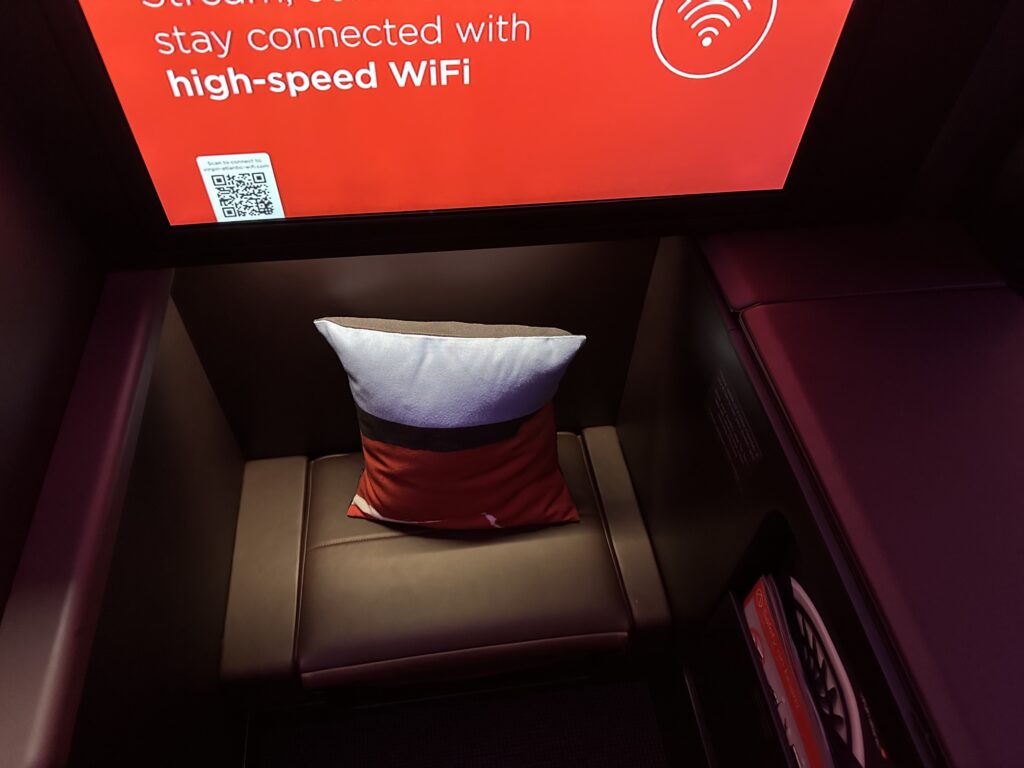 The partner seat folds out of the storage ottoman. Image: John Walton

Given that the repeating part of the staggered seating pattern ends at the side table/footwell construction, it felt a little unfortunate that there was so much width taken up with the large central structure, particularly in bed mode. This was a wide bed for a business class product, but it could have been an absolutely cracking, super-wide double bed experience. 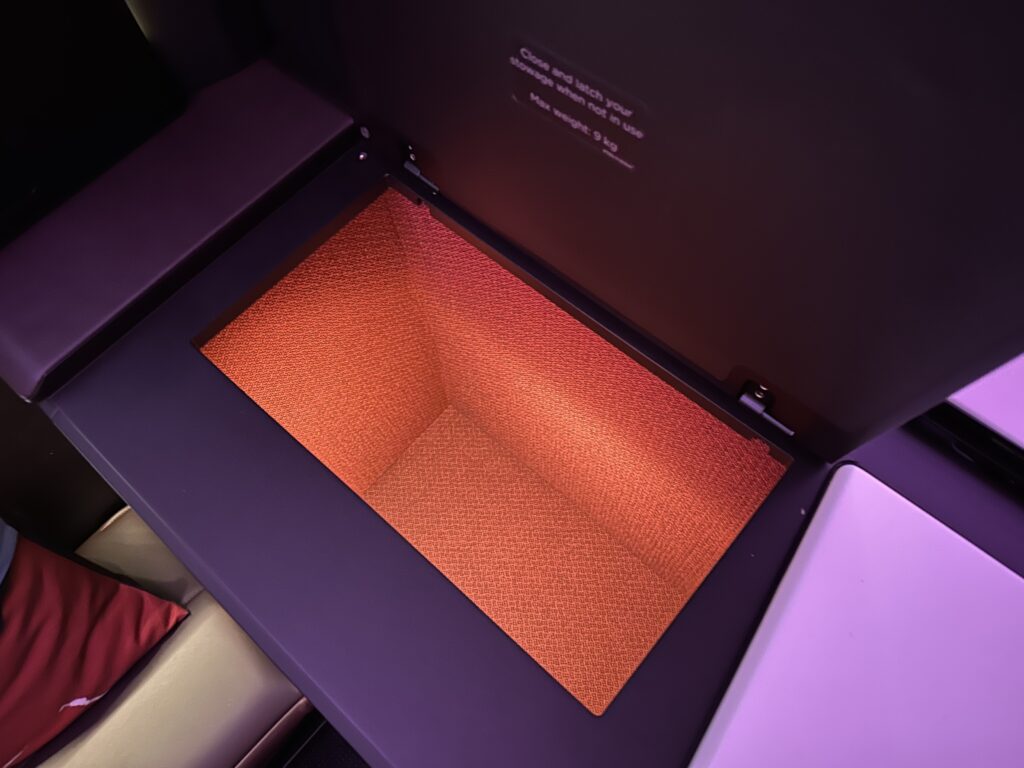 The storage bins were an odd size, too small for actual hand luggage and not really necessary given the overheads. Image: John Walton

A few small critiques of the product, which were surprising given that Thompson’s Vantage XL (and the doored XL+) is not a new seat: the seat controls for the outboard seat (1D) are elevated and block the all-important opportunity for couples to hold hands. 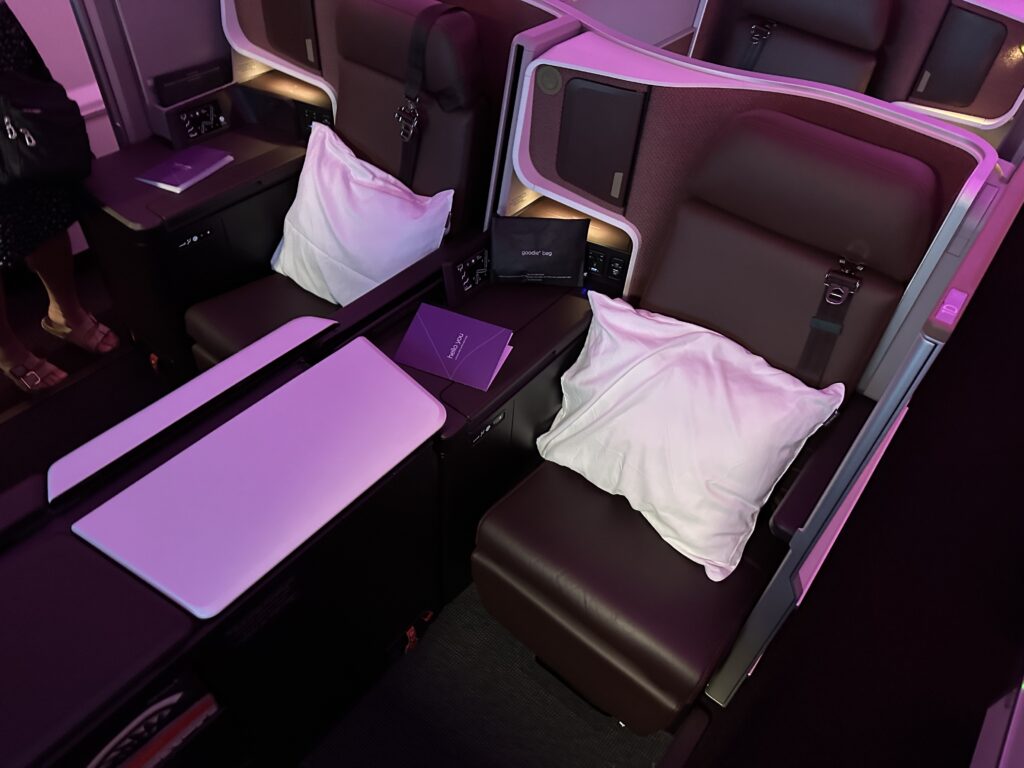 It’s an odd complaint, but for couples the seat controls are right in the hand-holding space. Image: John Walton

The inflight entertainment monitor is too far away to use as a touchscreen, and the remote control was very subpar — a real surprise given RAVE’s excellence otherwise. The larger screen also showed up how much of Virgin’s content is in lower definition. In partner dining mode, the touchscreen IFE monitor was easily activated by leaning back — there seems here to be a real opportunity for a hardcoded off button. And it would be lovely to be able to sync the two monitors automatically in order to watch the same movie at the same time. 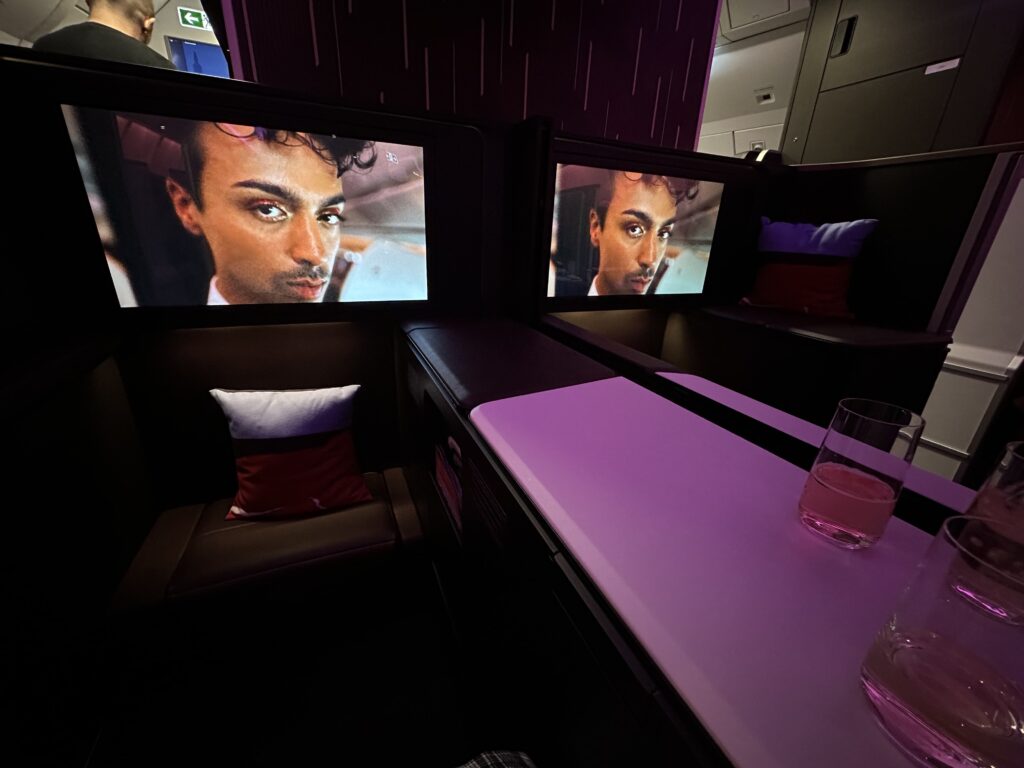 The screens were big and bright, but too far for touchscreen and the remotes were awful. Image: John Walton

Some more thought could usefully have been given to how this product interfaces with the galley too. Staring at the industrial doors 1 galley and having the bright white LEDs shining at you when the rest of the cabin has Virgin’s elegant moodlights feels like a miss, crew discussions are audible in the quiet A330neo (a nice problem to have, for certain!) and you can feel every slammed galley door and clunk of a trolley into the monument at your feet. Airlines will need to figure this out as front-row business-plus develops. 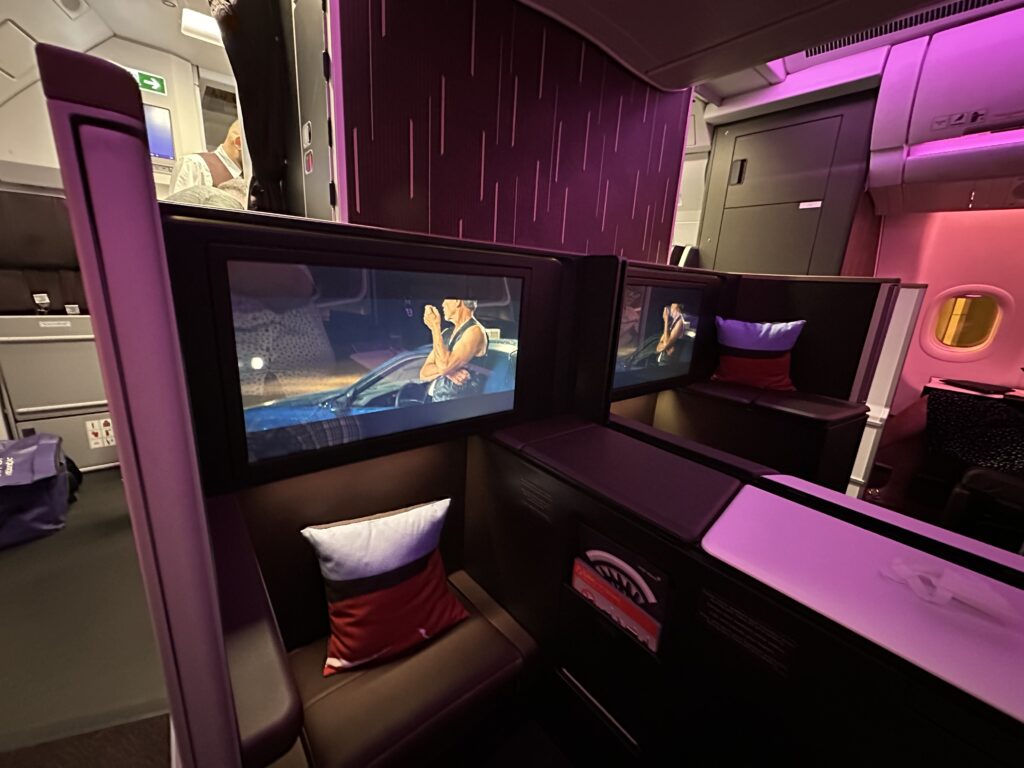 By no means a Virgin-only problem, but the separation between galley and business-plus needs to be thought through. Image: John Walton

Other than lamenting roads not taken, the hard product is very decent, although the watercooler chat (well, the chat at the Loft social space at doors 2) is that the central divider, which we did not use, was out of service, and seat 2G was also marked out of service and unavailable to be assigned online or during checkin (where the agent mentioned it had been out of action since launch), although onboard the crew did a quick check and were happy to allocate it to us so we could fly next to each other.

Inviting two fellow journalists to join us for supper in the Retreat Suite, it became rapidly clear that the product is very much in a soft launch period and that Virgin hasn’t applied its substantial product design nous to thinking about the logistics of how to serve the Retreat Suite.

Orders were taken entirely separately even though we had all clustered in the Loft for cocktails, with the flight attendants from each aisle working down the cabin, meaning that each of us was brought a drink and mini-bowl of potato crisps in the Loft in sequence rather than all at once.

By the time we sat down, the crew had clearly had a good think about it and served the meal with each course arriving at the same time, but it’s a good example about having to think outside the existing service pattern box in these seats.

The meal was the same as the rest of the Upper Class cabin: an excellent chilled starter and absolutely awful main course, with a delicious if slightly ugly banana bread pudding. 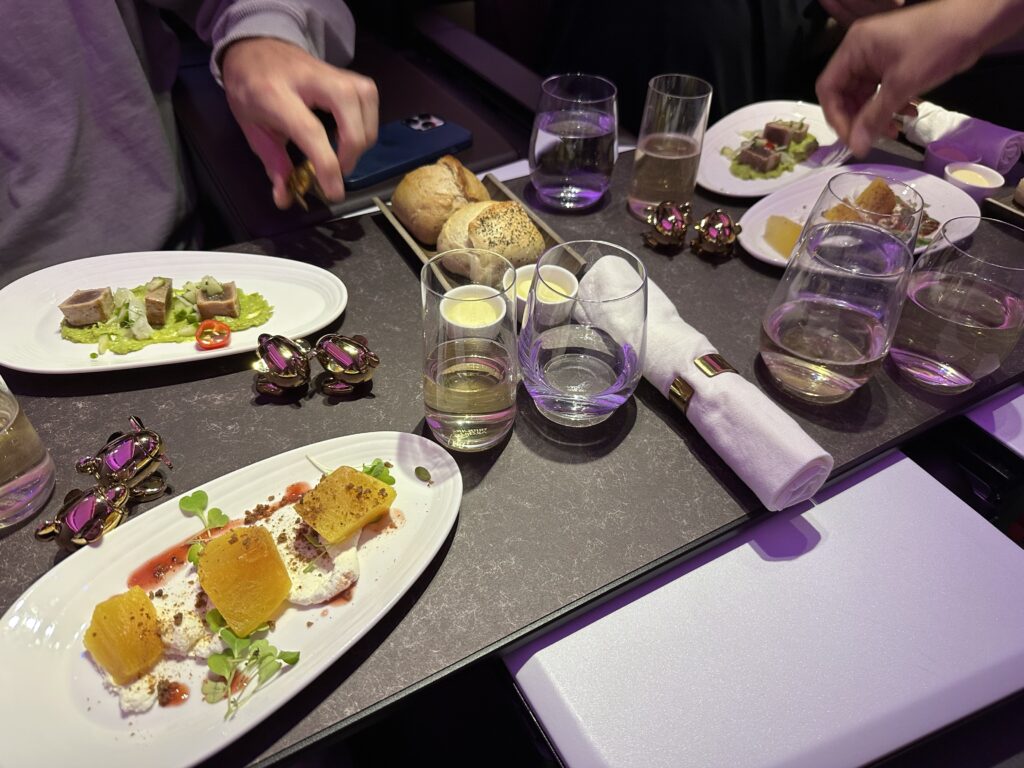 The double table could have used something like a runner to pull it together. Image: John Walton

Virgin is understood to be having issues with its new Tampa catering, and the crew were very apologetic about it, so they’re clearly working on it. 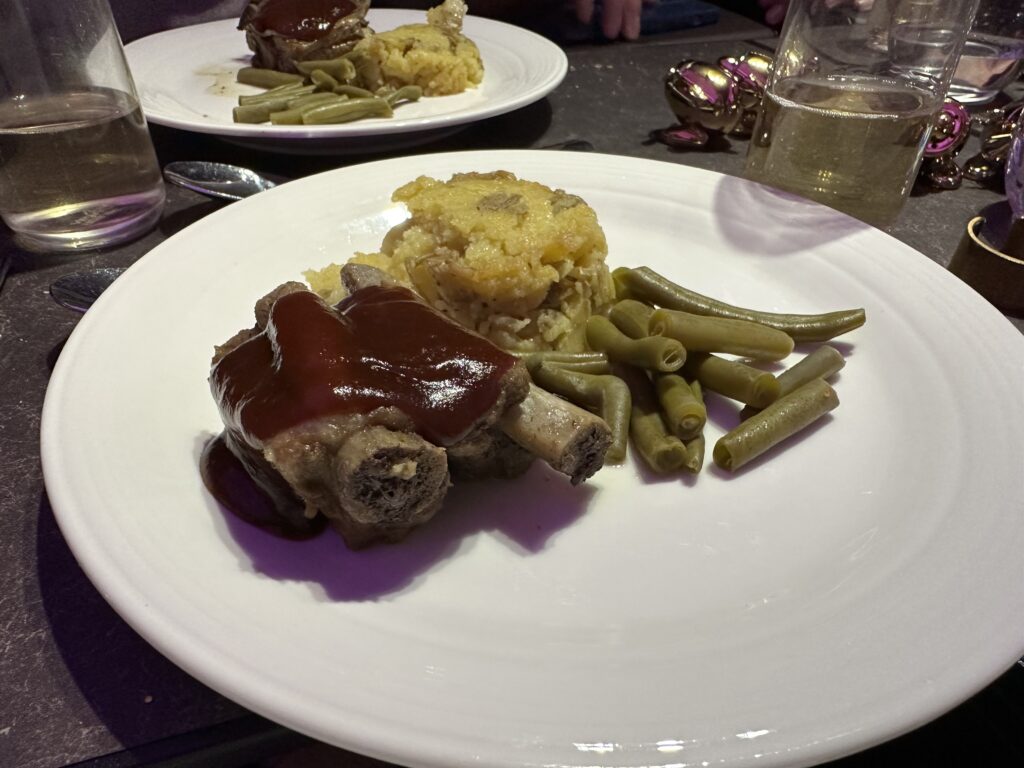 The main course was perhaps the most miserable thing I have ever had the displeasure of eating in business class. Image: John Walton

Overall, and after much discussion, it was fascinating to note that, of your two RGN journalists, the one of us who has flown international first class a dozen or so times found the seat decent but the soft product lacking, while the one whose experience so far has been more on the business side of things found it a thoroughly delightful and special experience. Virgin — and other airlines — will need to consider both kinds of passenger as they continue to develop their business-plus offerings. 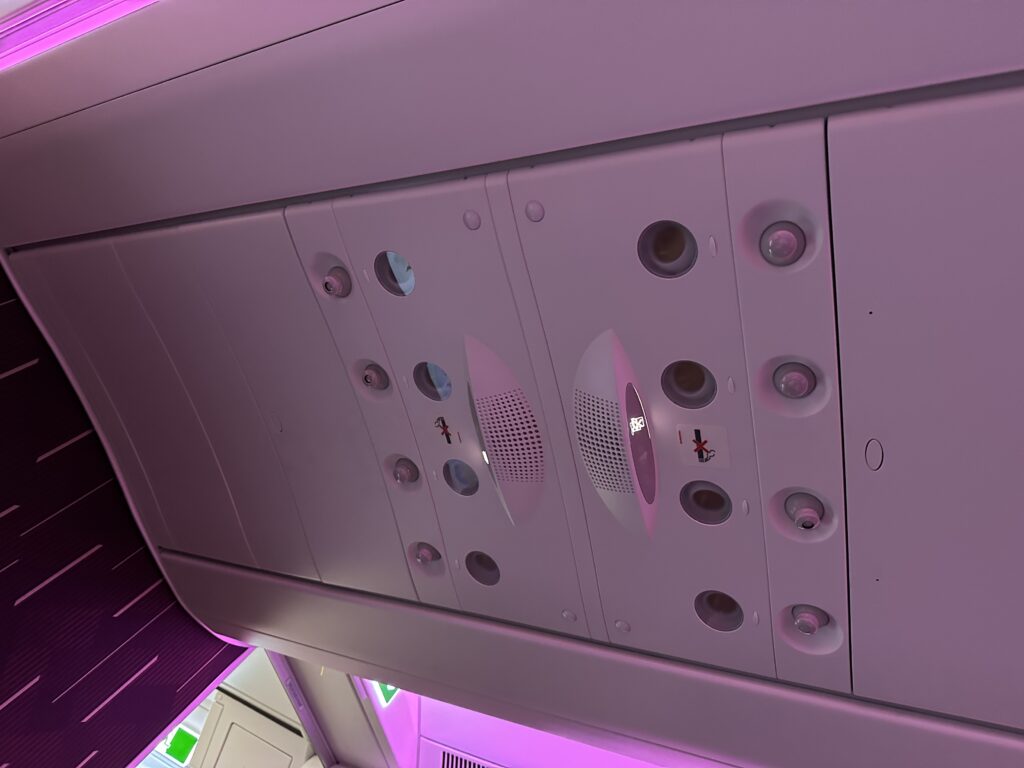 Additional reporting from Fintan Horan-Stear, who with John Walton was a guest of the airline. As ever all views are the authors’ own.

RGN Premium: Continued focus on B2B, and ESAs for Gen 1 and 2