When Virgin Atlantic unveiled its A330neo Upper Class suite this July, your author was somewhat taken aback: an off-the-shelf seat for cabin innovators Virgin Atlantic? In a series of browns? In the thermoplastic flesh, though — as a guest of Virgin Atlantic on its inaugural flight to Tampa — the seat turned out to be an excellent adaptation.

Let’s start with the seat: it’s the Thompson Vantage XL+ seat that Delta débuted in 2016 and later installed on its own A330neos. Laid out between doors 1 and 2 in a singleton staggered layout — no honeymoon double beds here — there are 32 seats in the cabin.

As expected, the doors solve much of the zero sum problem where staggered seats immediately next to the aisle have less privacy and experience brush-past from passengers and crew. 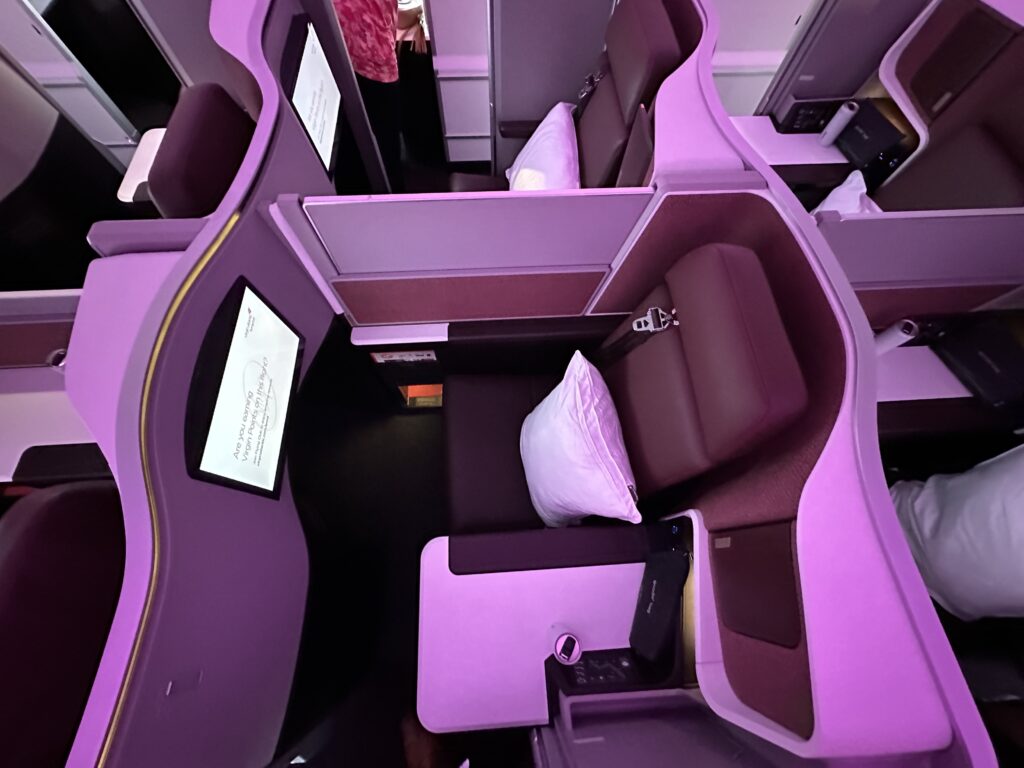 There’s a decent amount of space within the staggered layout. Image: John Walton

The doors themselves are remarkably thin, though in industrial design they do not feel particularly integrated with the seat. Sliding forwards, the door almost reaches the seat in front: there is approximately a 2cm/1” gap, which is probably for the best to avoid thumping the door into the passenger in front.

In look and feel, the seat is firmly Virgin in brand: the chocolate leather and the deep pink-brown fabric echoes the 2019 A350 seat, while the lavender-grey thermoplastic at eye level catches the light delightfully, whether that’s the LED wash of an early morning preflight mood theme or the brighter sunlight peeping in through the windows over the US. The lit cheatline of reflecting gold above the seats as you look forwards, too, is a charming touch. 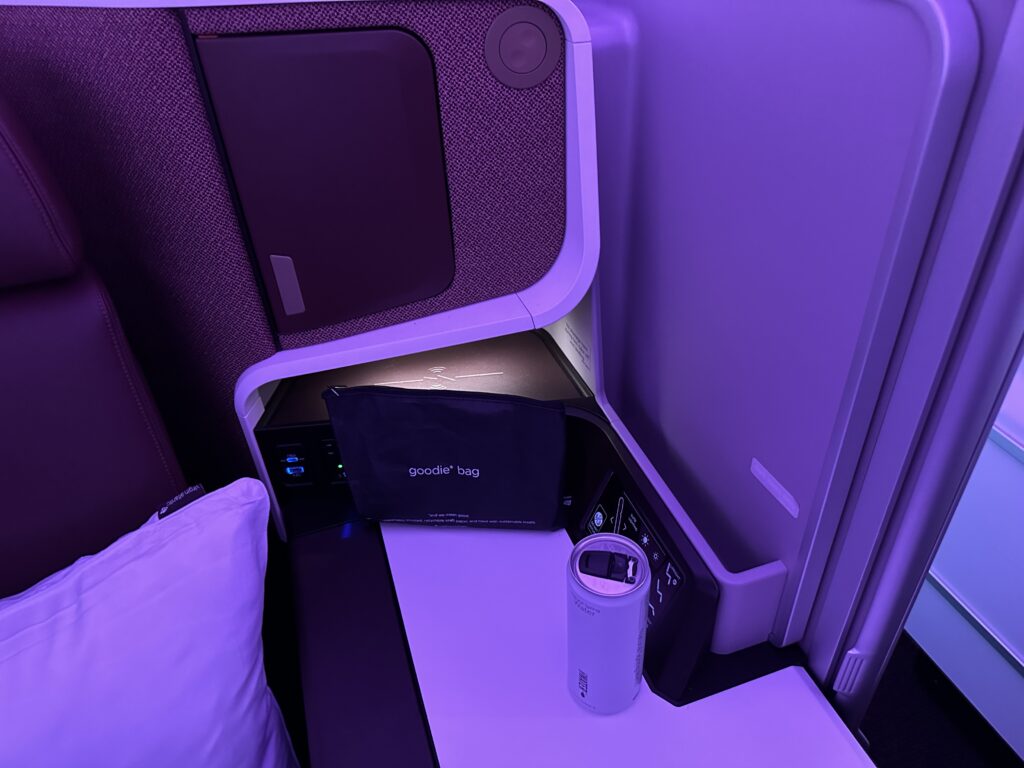 My seat was 6D — private and secluded. Image: John Walton

The seat reclines via a clearly marked panel to the side, although I did note that there are no tactile markings on the panel for blind or visually impaired passengers. There’s a decent legrest that lifts up as the seat descends to go flat, and all three positions — reclining seatback, position of seat base, and legrest — are individually controllable.

Unlike other versions of this seat I’ve experienced, the Virgin seat appeared to lower vertically to meet the footwell cubby. As a result, this space was far more roomy than I had anticipated either before the flight or indeed when first looking at the seat on board. There’s a fitted mattress pad with slot for the overshoulder belt, so you can go straight to sleep after takeoff or until landing, and I was able to catch a very good ninety-minute catnap, even amidst the hubbub of the inaugural flight. I’m very much looking forward to trying the larger, partner-dining options of the front-row business-plus Retreat Suite on my return.

Given the restrictions of the relatively narrow A330neo cabin, praise must go to Virgin, Thompson and particularly to designers Henry Buckley and Factorydesign. 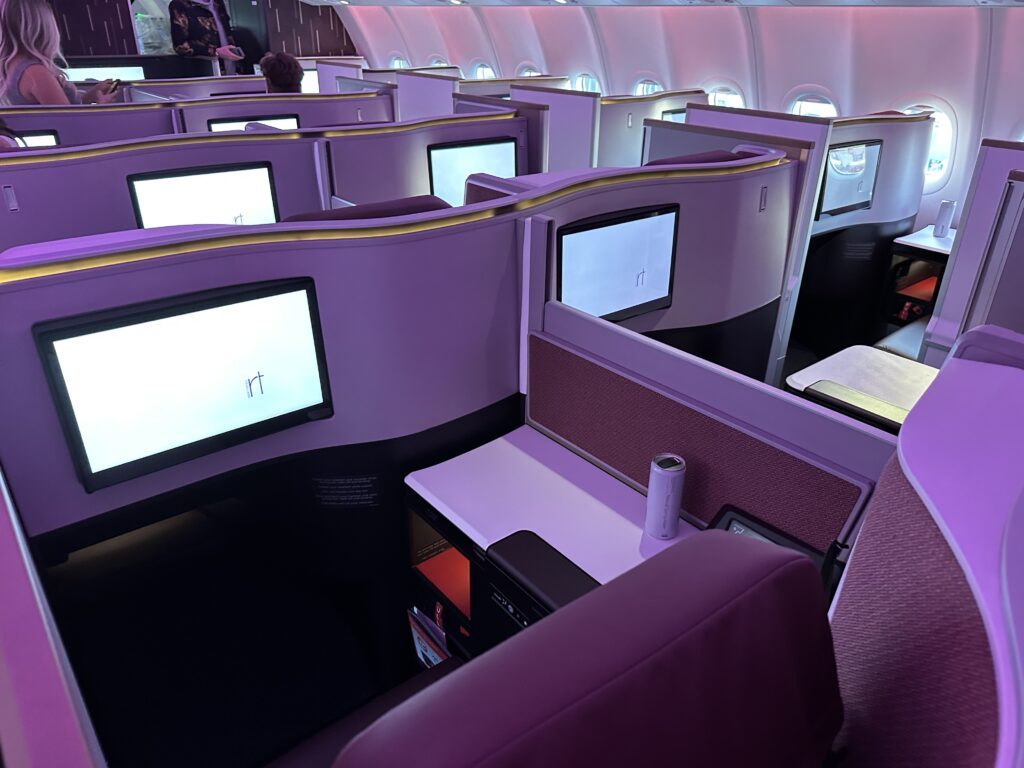 The CMF of the cabin was very impressive under multiple lighting situations. Image: John Walton

Entertainment is via Safran’s RAVE system and is as excellent as we have come to expect from them, although Virgin needs to address the fact that very little of the content was subtitled for Deaf people, the hard of hearing or even just viewers who despair of the quality of audio in modern film and television. Viasat Ka-band Internet was provided free for the flight and absolutely excelled on this London-Tampa route, as you’d expect from Viasat’s own-satellite coverage. 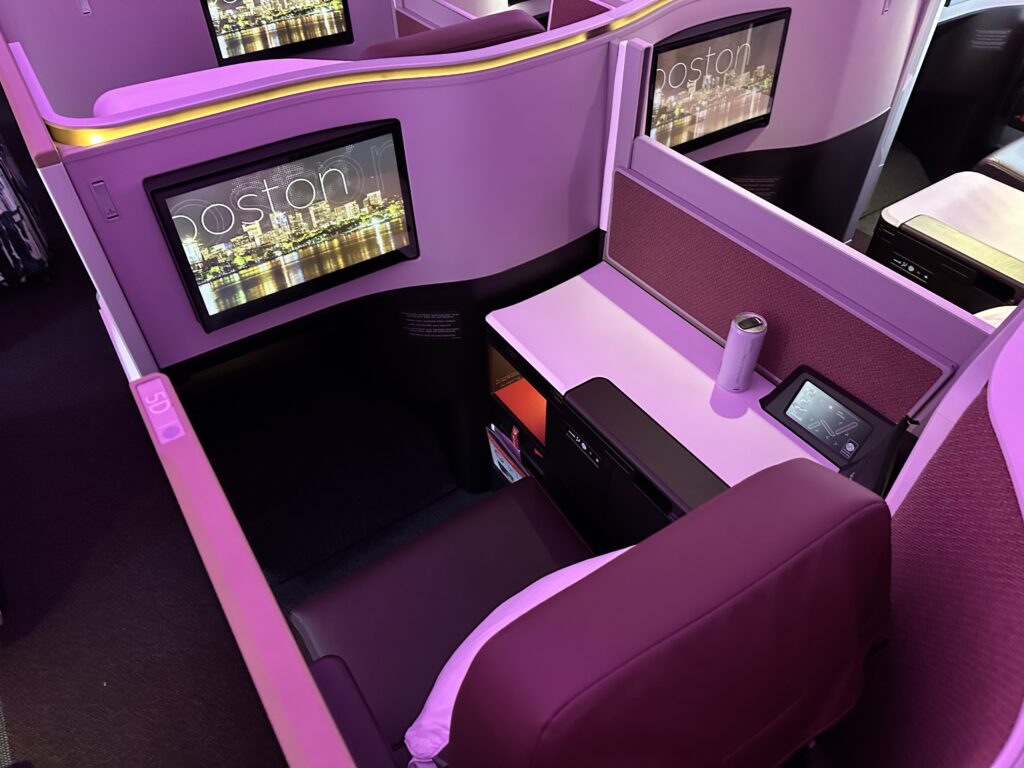 I popped up into 5D and think this might actually be my preferred seat within the layout. Image: John Walton

On boarding via doors 2, you’re greeted by the A330neo version of The Loft, a fun and funky space manufactured by AIM Altitude, featuring four seats in warm reds, washed by pink LED mood lighting. Replacing the classic Virgin bar, it’s a great way to enter the aircraft.

Interestingly enough, the A330neo Loft didn’t present particularly well on the ground at the unveiling earlier this year: its higher seating didn’t encourage you to relax into the space. In the air, though, amid the chatty atmosphere of an inaugural flight, it shone — the seats are separated enough to allow people to walk through, while the height of the seats means that even when seated you’re at eye level with standing passengers and the crew popping by to offer a beverage.

The crew on this inaugural flight were absolutely outstanding — Virgin always does this well — and the food delicious. The beetroot and goat’s cheese starter was exceptionally good, and the chicken and mushroom pie tasty if a little lacking in the glam factor. A mid-afternoon snack of the “gourmet fish goujons hot sandwich”, which is airline speak for the delightfully simple British pleasure of a fish finger butty, went down a treat. 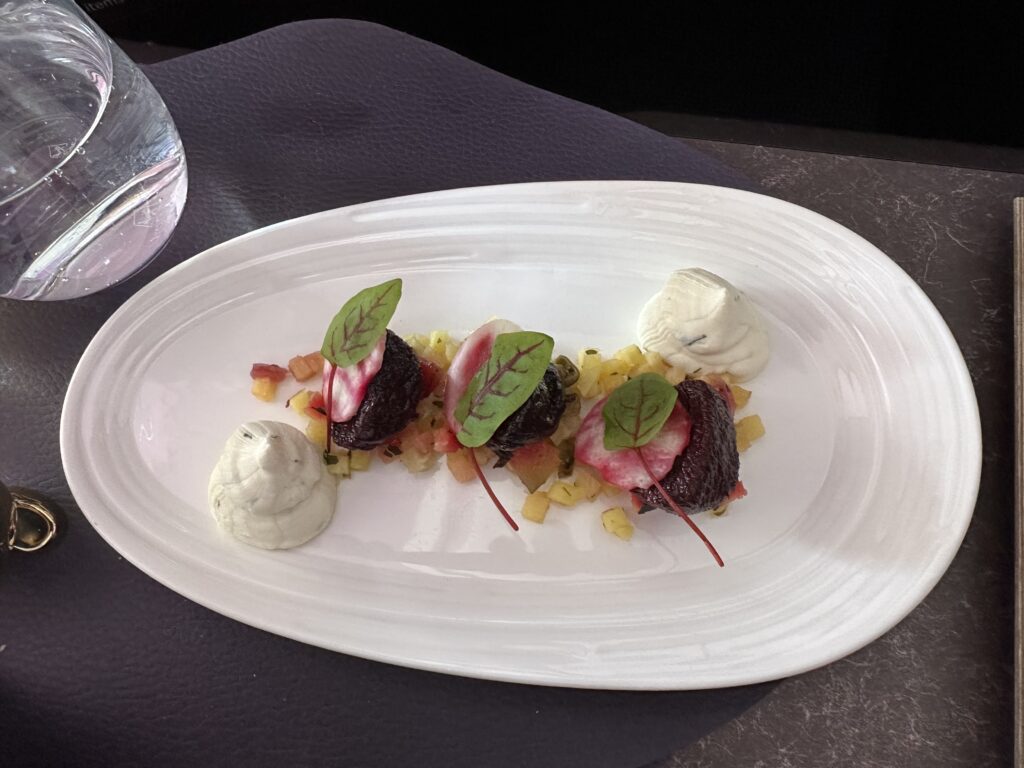 The starter was delicious and really looked the part. Image: John Walton

I must say that I miss the ceremony of the full afternoon tea service that Virgin used to do, although the amazingly scrumptious fudge scone with salted caramel spread went some way to assuaging things. 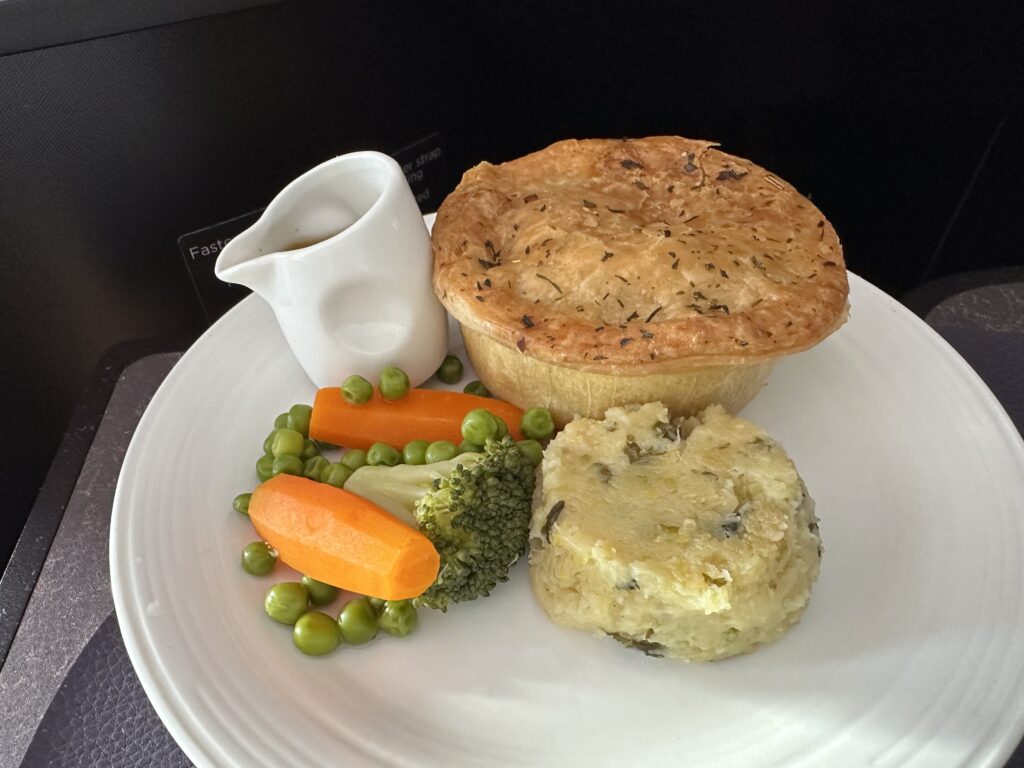 While the pie was tasty, I’d have liked something with a bit more sparkle to go with it. Image: John Walton

All in all: I’ve flown every Virgin Atlantic Upper Class product since 1999, and this one fits well into its stable of excellent seats. It doesn’t move the needle in the way that the 1999-era J2000 or 2003’s Upper Class Suite did, but it’s a top-notch product.

I was delighted to note air vents throughout the cabin — hurrah! Image: John Walton

John Walton was a guest of Virgin Atlantic, but as ever all views are his own.