Most international first class travellers wouldn’t immediately pick American Airlines as their go-to carrier on account of its historical reputation. American’s first is more “upgrade class” than the rarefied elegance of Singapore Airlines, the unapologetic bling of Emirates, the multi-room options of Etihad, or the je ne sais quoi of Air France.

Indeed, when I flew from Hong Kong to Los Angeles on board American’s flagship Boeing 777-300ER, only one seat in the cabin was occupied by a paying passenger. The rest were non-revs or upgrades, myself included: American’s PR team upgraded me to first from a paid business class ticket in order to experience the product. This “upgrade class” is one of the existential issues with international first, and indeed American is the last US carrier not to have either cut (Delta) or be sunsetting (United) this class of service.

The writing’s on the wall at American, too, with only the 777-300ER equipped with first in the current generation of product, and even that not standing up well in terms of privacy in particular. But as carriers remove first in favour of an improved (and often renamed) business class offering, they draw both inspiration and direct soft product from first. To that end, American has a great platform on which to build its next-generation business class. I’d heard about a few improvements to trans-Pacific service in the pointy end, so my expectations were slightly raised coming into the flight — and they were met.

My first class throne tonight on @AmericanAir to LAX — very spacious, but I could wish for a bit more privacy. #PaxEx #thatjohnonAA pic.twitter.com/IJvoNT4mnC

The first sign that American’s service was going to be enjoyable was on boarding, when I was presented with a sizeable slug of a very decent Champagne. It turned out to be the Category 4 Philipponnat Clos des Goisses from 2006, and I was delighted to make its acquaintance in a tumblr alongside a large ramekin of almonds. (Note to the stemware crowd: yes, a more elegant glass might snazz up the feel a little, but like many lovers of good Champagne I am on team larger glass rather than team skinny flute. Indeed, here it opened up the aromatics well.) Refills were generously and proactively offered before we pushed back from the gate.

This is just the dinner menu on #thatjohnonAA HKG-LAX in first tonight. There's a whole other snack + brunch page too! #PaxEx pic.twitter.com/TWazNc2dcx

After takeoff, I continued enjoying the Philipponnat with succulent mixed olives for some salty-sour goodness (the sprig of fresh thyme was a lovely touch) and some very interesting vegetable crisps.

Service for the main meal was most impressive, with the purser serving in the cabin and a senior flight attendant working the galley like it was a short-order kitchen. Each course came out well-paced, well-presented and well-cooked (with the exception of the steak, which was overdone; I later learned that catering had loaded steaks of very varying size, making the cuisson much more complex). Given that all eight seats were filled, I was very impressed.

To amuse, a demitasse of a hearty, surprisingly thick gazpacho matched well with the caviar and sour cream blini, which was a smart way to add luxury without the cost of a full-sized serving per passenger.

The crab salad starter was well-dressed sauced with a light herbed mayonnaise, and the perfectly ripe mango was some of the best I’ve ever eaten.

I thoroughly enjoyed the hot and sour soup, which was of a very pleasing thick texture and quite spicy.

The salad, however, was a little disappointing, with assorted leaves and a few slightly crunchy pieces of apple. Having just enjoyed a tasting of six truly interesting salads at Gate Gourmet’s Hong Kong facility, I know that there are better options available out of HKG.

Rescuing the aforementioned overcooked beef were a creamy béarnaise and tart cherry sauce, which added moisture for a reasonable mouthful.

Alas, the steam oven did for the beef, but it was still tasty thanks to the two sauce options. #thatjohnonAA #PaxEx pic.twitter.com/z68XAE93lM

The signature American ice cream sundae was as delicious as ever, although I couldn’t help wondering if a few more toppings might have added some first class fun to the bowl.

But the pièce de resistance was the cheese board. I have never had a selection of cheese on an aircraft that was as good as this, even if the list could use a bit of geographical help (Savoie is on the Swiss border, for example).

The rest of the wine list, too, was impressive, showcasing both American classics like a Beringer Chardonnay and one of my favourite Sauvignon Blancs from Craggy Range in New Zealand. The white Burgundy was decent enough for those who like a lighter white, though not to my palate. On the red side, the Blackbird Bordeaux blend was very good, while the Saintsbury Pinot Noir was complex and well suited for both the airline environment and the Pinot-loving local market in Hong Kong. The Amarone was beefy on the nose but lacked a little punch in the air, but both the sticky wines were truly excellent. Overall: a better wine list than many airlines offer in first class.

Truly delighted by the sound of this wine list tonight. This Philipponnat is delicious already. #thatjohnonAA #PaxEx pic.twitter.com/e8CigaLIrb

Breakfast was solid but it felt a little odd to see British-style bacon on an American breakfast plate. The mango, again, was utterly divine.

Apart from the food, I liked the Cole Haan amenity kit and the assorted duvet and blanket combination. The seat could have used an actual foam mattress like Air New Zealand and others offer, though, rather than just a slightly quilted sheet topper — which I think is the same as business anyway. There’s scope for a soft product upgrade for the future business class there, in any case.

All in all, though, the experience was well above even my raised expectations. American’s soft product design team and suppliers have done an impressive job taking first class back to a competitive point, and are setting the airline up well for the inevitable evolution of business. 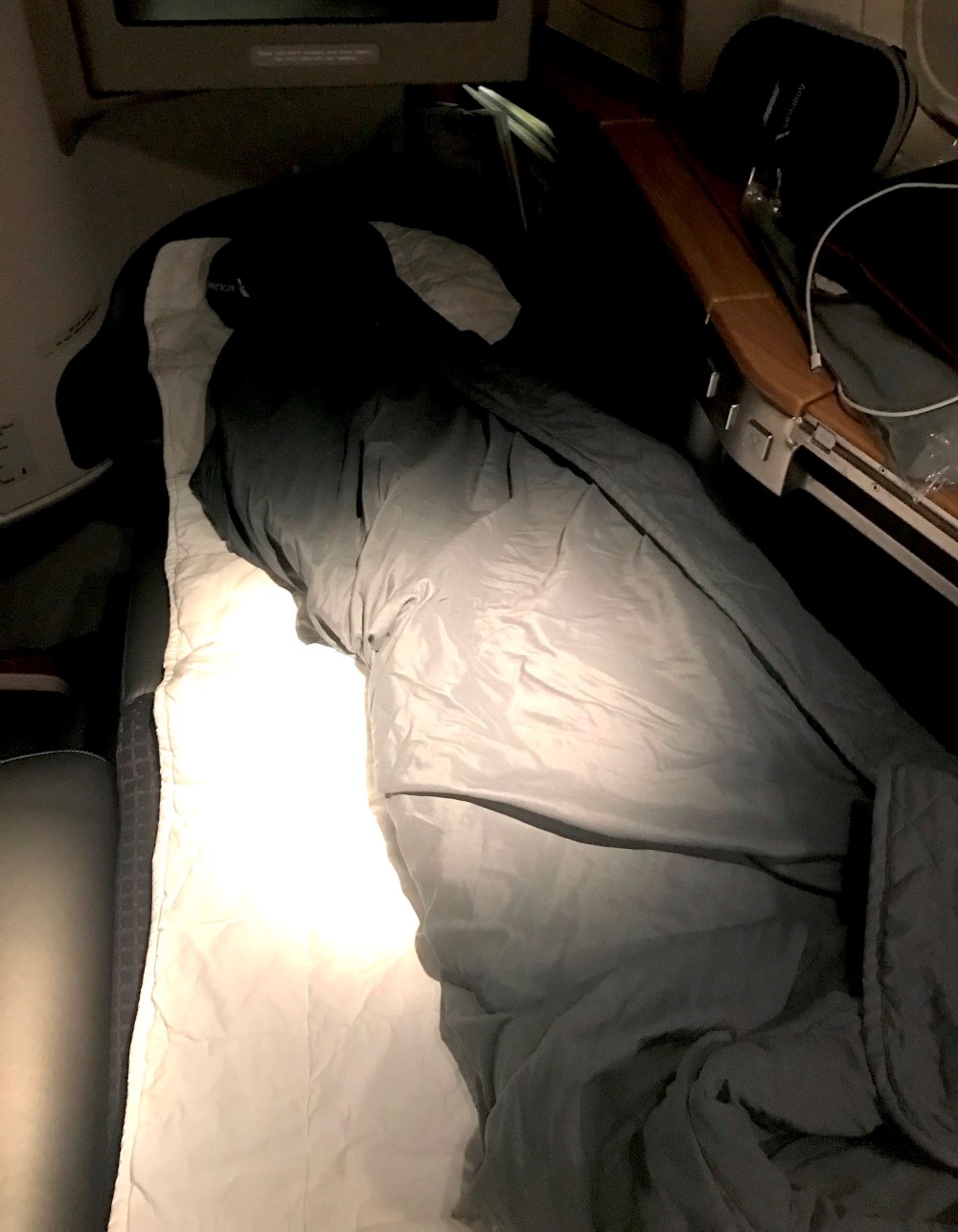 American Airlines upgraded John Walton from a paid business class fare to first class to enable this review, but as ever all opinions are his own. 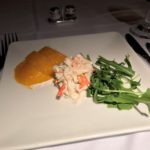 This was the tastiest airlines starter I’ve enjoyed in quite awhile. Image: John Walton 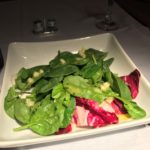 The salad could have used some snazzing up. Image: John Walton 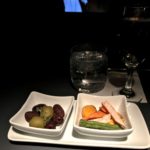 Some of the ports have proved longer lives than others… Image: John Walton 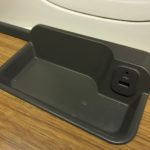 Only a 1A socket but the phone and glasses tray worked well. Image: John Walton 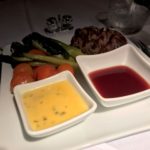 I know beef is traditional but United served me a short rib a few days later that beat this meatpuck by a country mile. Image: John Walton 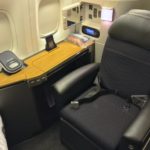 I haven’t quite figured out the reason for the swivel to desk without legroom mode and neither did any of the other passengers on my flight. Image: John Walton 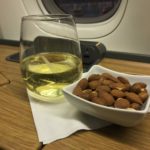 I enjoyed a hearty glass of bubbly before takeoff. Image: John Walton 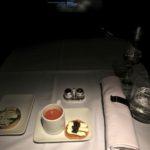 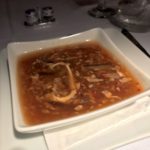 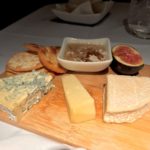 Hands down American had the best cheese plate I’ve ever enjoyed on a plane. Image: John Walton 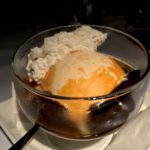 Could some fun sprinkles or a shake of gold leaf add a bit of excitement to this delicious sundae? Image: John Walton 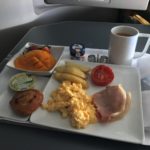 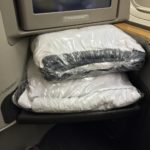 Bedding is great but in first class many other airlines present, unwrap and arrange it for passengers. Image: John Walton 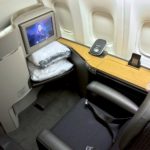 Americans first seat is sizeable but doesn’t use the space as well as others. Image: John Walton 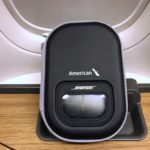 Americans Bose headsets are as welcome in first as they are in business. Image: John Walton 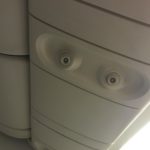