It’s safe to say that Finnair’s new Collins AirLounge business class seat for its Airbus A330s and A350s has provoked a lot of discussion across the industry. This sofa-style seat, which does not recline, but rather sees the adjustable legrest rise upwards to create a flat surface, is an entirely new product, so Runway Girl Network sat down with head of customer experience product design David Kondo and head of inflight customer experience Eerika Enne for a deep dive into the design details.

“This all started when we were thinking ‘what does the new Finnair look like?’”, Kondo explains. “The original impetus was really around the A330s, because we know the A330 product at Finnair was really at the end of its lifecycle.”

Finnair’s A330s offer the Thompson Vantage product, in an alternating 2-2-1, 1-2-1 configuration that gives seven out of every nine passengers direct aisle access, but which are constrained at the footwell area. Its A350s have a very basic Safran Cirrus seat, meanwhile.

Further impetus, Kondo explains, came as “we were approaching 100 years, we want to address customer feedback, and we have this strategy of really putting Finnair on the map and making us quite distinctive and unique.”

The process has been a long one, even taking the delays resulting from the COVID-19 pandemic into account. Back in 2017, Finnair invited this journalist to an evening workshop run by Kondo and involving frequent flyers and selected industry experts assessing the existing products on the market. Clearly, Finnair decided that none of them was the right answer.

The seat now called AirLounge originally broke cover in the mid-2010s with the British Airways name attached to it, for the replacement of Club World, conceived by Priestmangoode. It is now manufactured as the Collins Aerospace AirLounge, and Finnair has worked with design agencies Tangerine and Koko3, which designed the airline’s non-Schengen lounge, to create the impressive CMF and ambience for the aircraft. 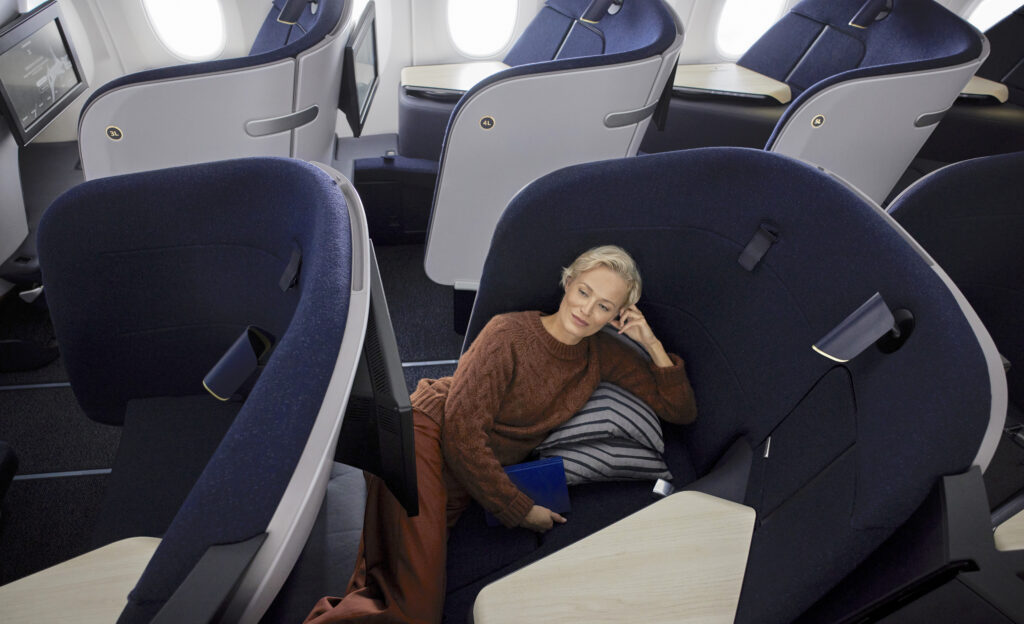 The idea of a non-reclining seat has been a provocative one. Image: Finnair

Notably, the seat’s sleeping space is open to the sidewall of the aircraft, rather than with many products being constrained there by a footwell. 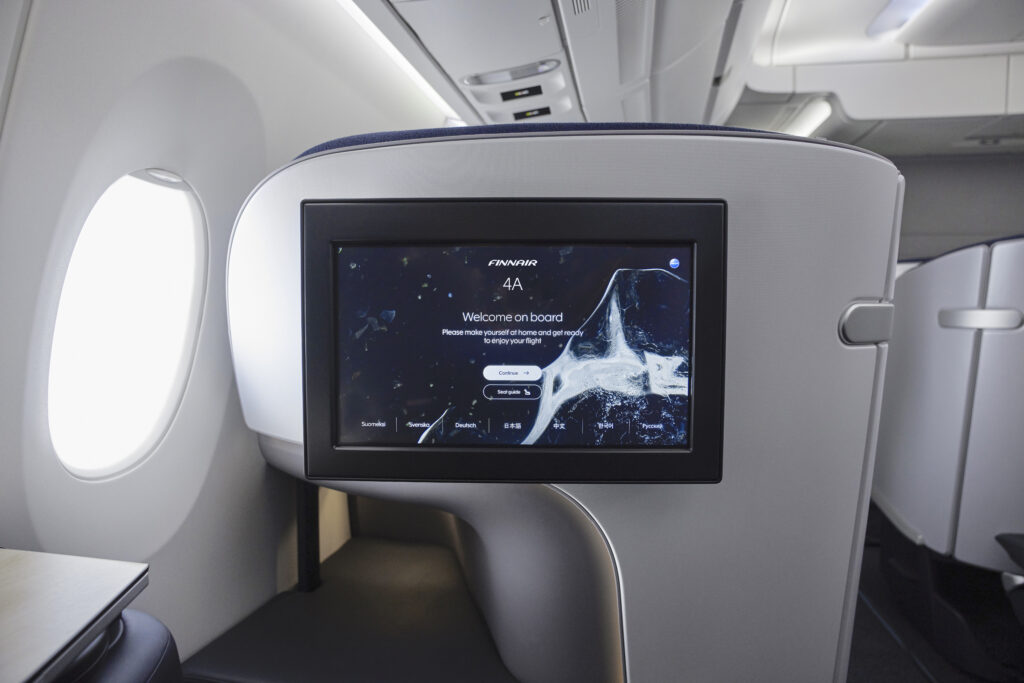 To maximise space, the seat butts right up against the sidewall. Image: Finnair

This, Kondo explains, “is built into the architecture of the seat. That was one big thing I really pushed for in the beginning, because you have this wasted space at the sidewall. We all know the footwell of the seat is often sort of a pain point for a lot of seats.”

Finnair’s new seat, Kondo continues, “is actually fully open to the sidewall, and we did need to do some work with Airbus on that as well, because it is kind of a new thing. There have been seats done with it previously, but it’s not that common.”

The airline’s glossy PR images show its A350 cabin in the implementation, which of course raises the question of how the seat will differ on the A330’s narrower fuselage, which has proven complex for other products.

“The geometry difference is kind of similar to what you’d have in a [Collins] Super Diamond,” Kondo says. “So, the A350 being bit wider, you’ve got the pitch slightly shorter, but a wider seat. But the living space and interactions with the seat are all pretty much consistent.” 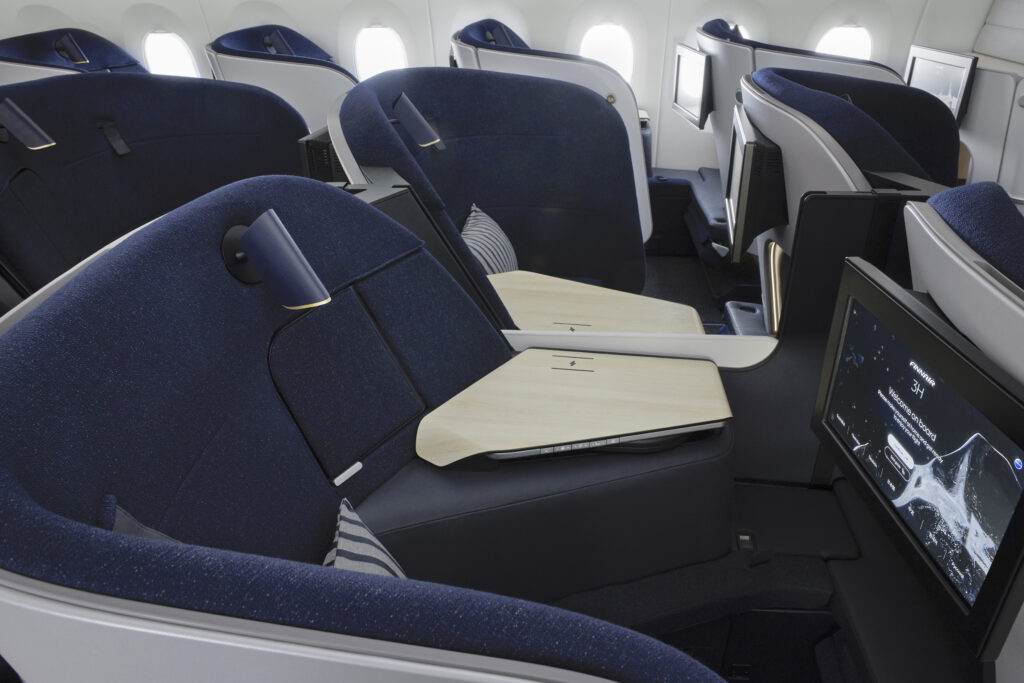 To optimise density, the footwell of the first row in the A330 dovetails into the sidewall of the Diehl lavatory in front of it, while on the A350 the dovetail is with catering cart storage. Finnair has added a new larger lavatory on the A350 in business class, and included an accessible lavatory on the A330, where the certification regulations had not previously required one.

All in all, Finnair is to be praised for both taking a risk to début a new kind of seat, and to have concentrated so impressively on the gestalt of its colours, material and finish. 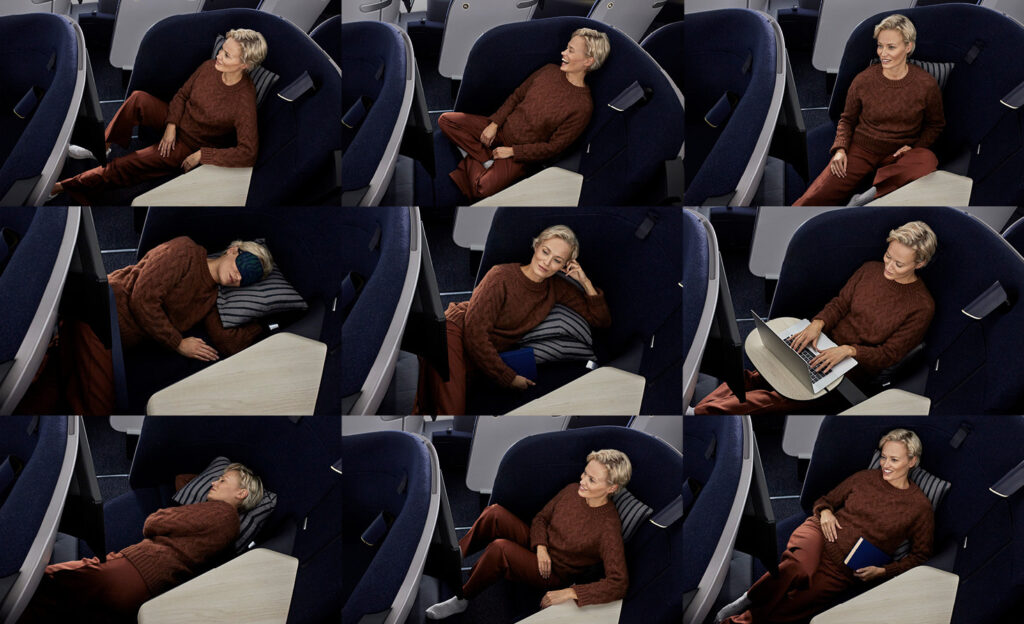 The idea behind AirLounge is that passengers can pick a wide variety of positions. Image: Finnair

Press Release: Female execs at Collins in County Down make their mark