Flying around Europe is rarely a matter of luxury, even in business class, with the European-style “Eurobusiness” still de rigueur across the continent. Your author’s expectations were therefore low on a connecting flight from London to the US over TAP Air Portugal’s Lisbon hub, not least because TAP doesn’t exactly have the highest reputation for operational excellence or passenger experience, but the space onboard and the basic bones of a good product were surprisingly pleasing.

The flight was on an Airbus A321neo soon to be celebrating its second birthday, and one of TAP’s shorthaul market, non-LR versions. This aircraft was an upgrade to the planned and scheduled A320neo.

Seats onboard were a comfortable Recaro slimline, but these didn’t seem to be the very newest SL3710 seats — rather, they seemed to be the previous generation, likely the SL3510. (That would match the January 2020 delivery date of the aircraft, CS-TJQ.) 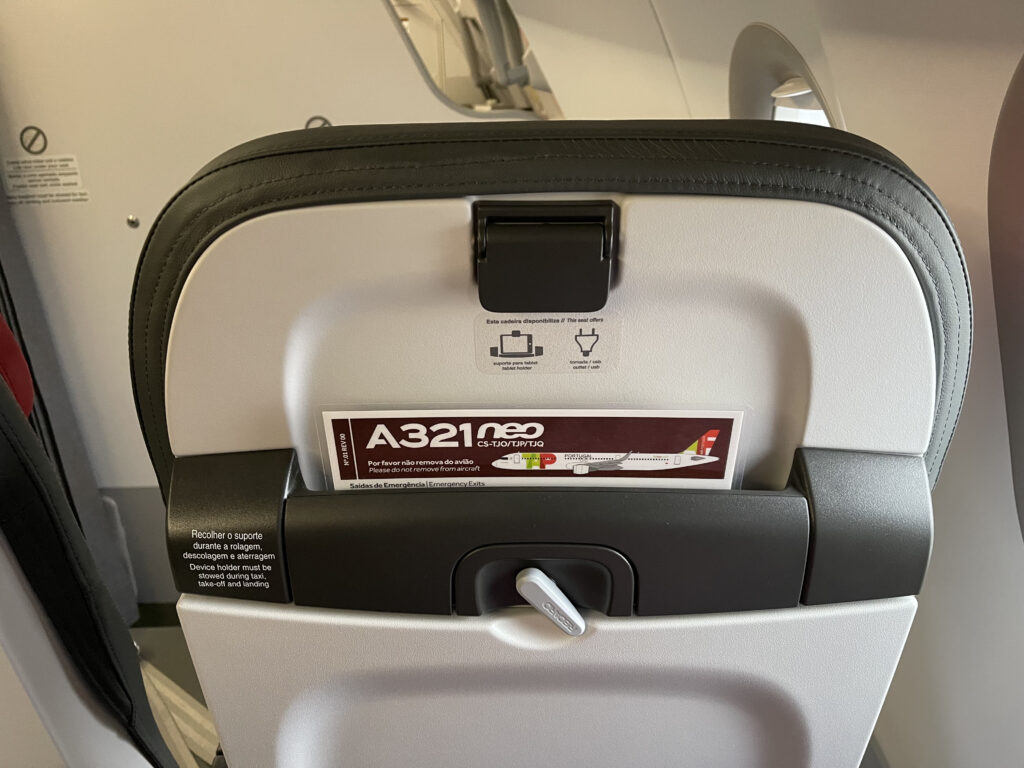 Still, the SL3510 is a comfortable ride for a couple of hours, and at TAP is pitched at what I believe is 33” — quite generous for European business class within the last few years, with key route competitor British Airways coming in at a measly 30”. 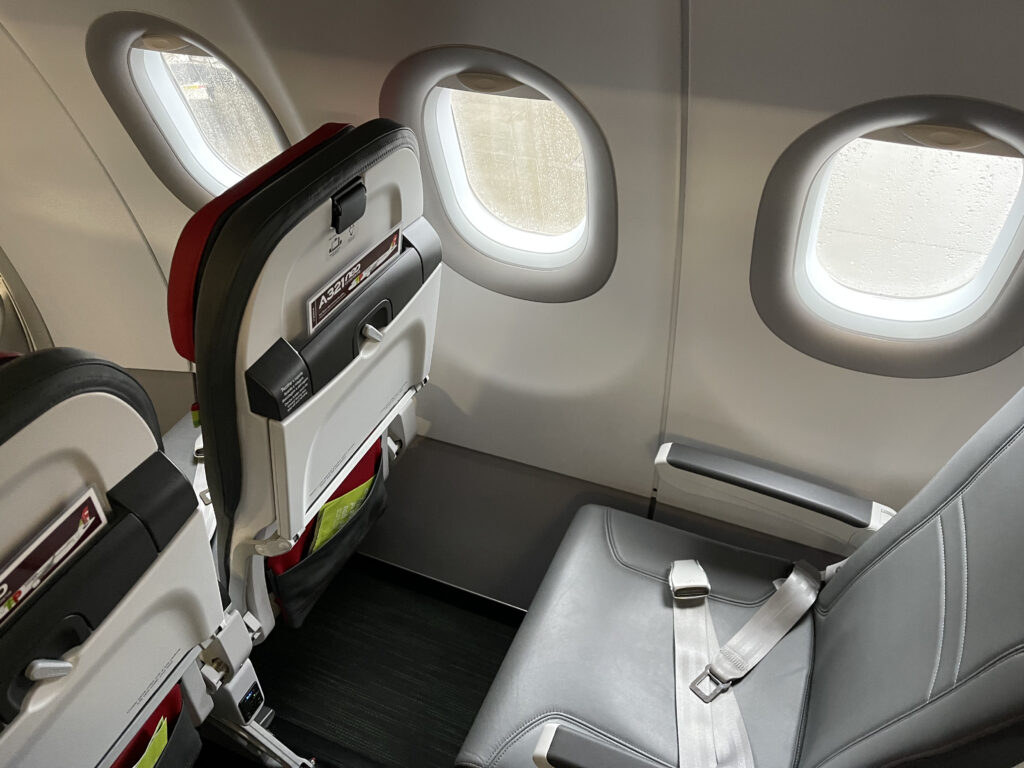 Legroom was entirely ample even for your 6’3” journalist, and the amount of personal space was pleasant at the pointy end. One imagines that, with both the overwing exits and the behind-the-wing door active in the Airbus Cabin Flex configuration, there is not quite as much room down the back. 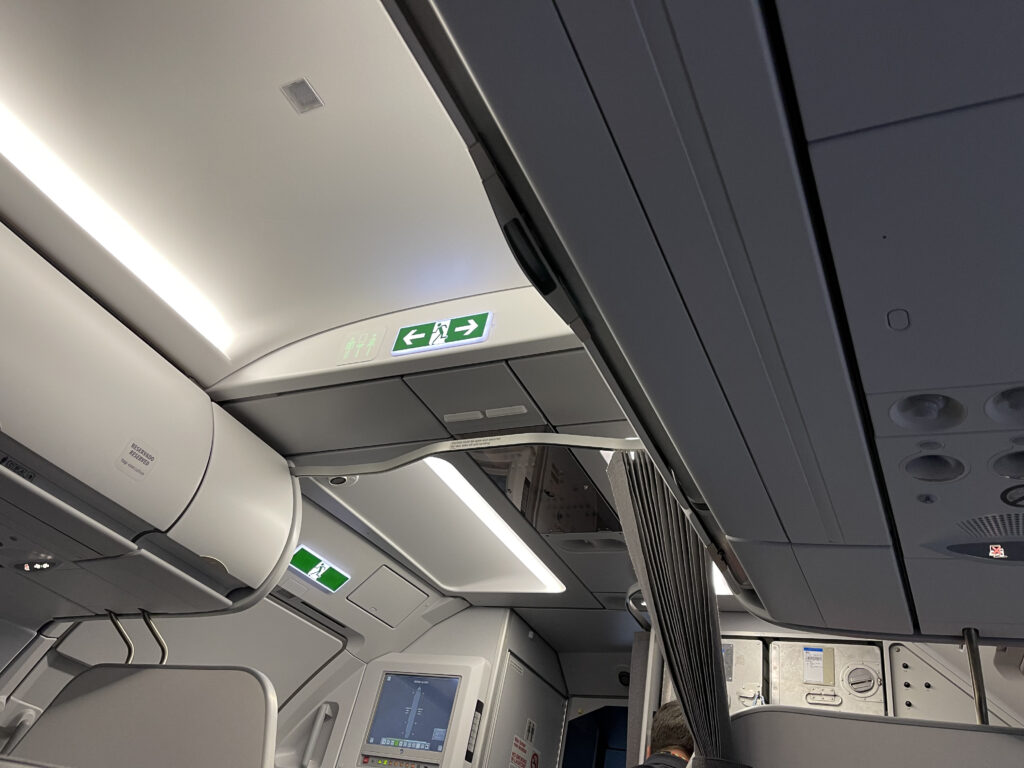 The onboard dining was fine if unexciting, and with pre-ordering an option (through TAP’s frankly terrible website) there were no surprises when the creamy seafood starter and rather stodgy beef pie with faintly inexplicable asparagus on a somewhat dried out bed of mashed aubergine arrived. Still, it was hot, filling and served by an amiable crew. 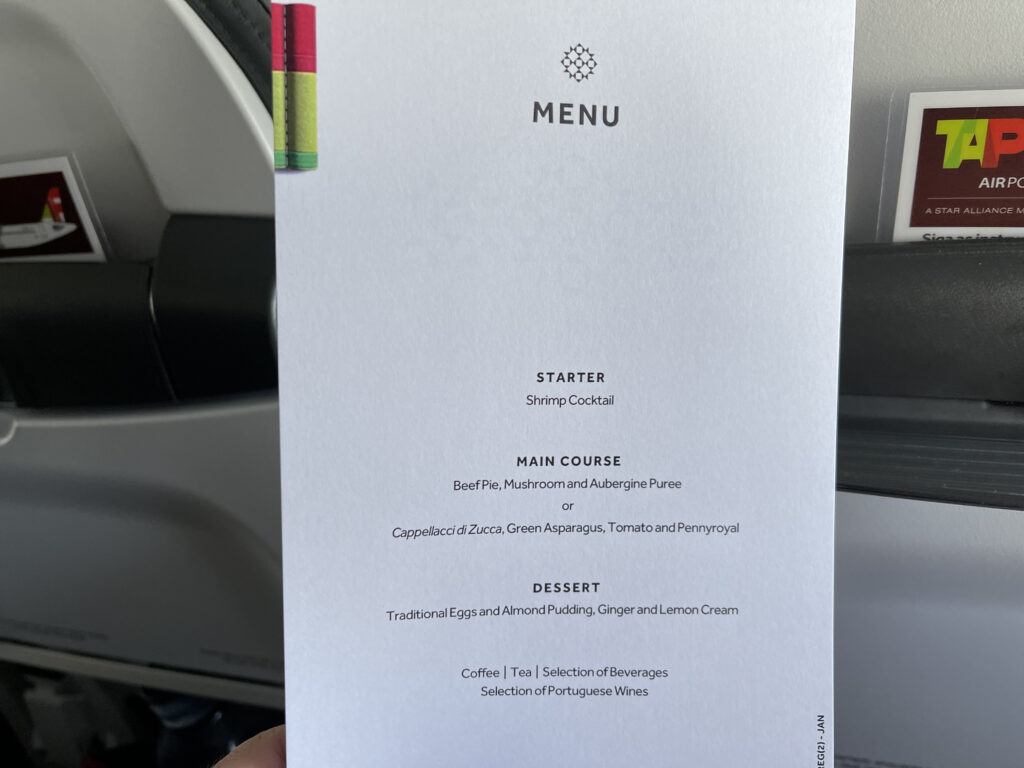 Gourmet dining it was not, but the delicious eggs and almond pudding went down a treat, as did a few glasses of the light, fruity vinho verde that TAP serves alongside other Portuguese wines. No proper Champagne was on offer, but a Portuguese sparkling was flowing freely too — nothing to write home about, with a very forward acidity and little complexity, but it was fine. 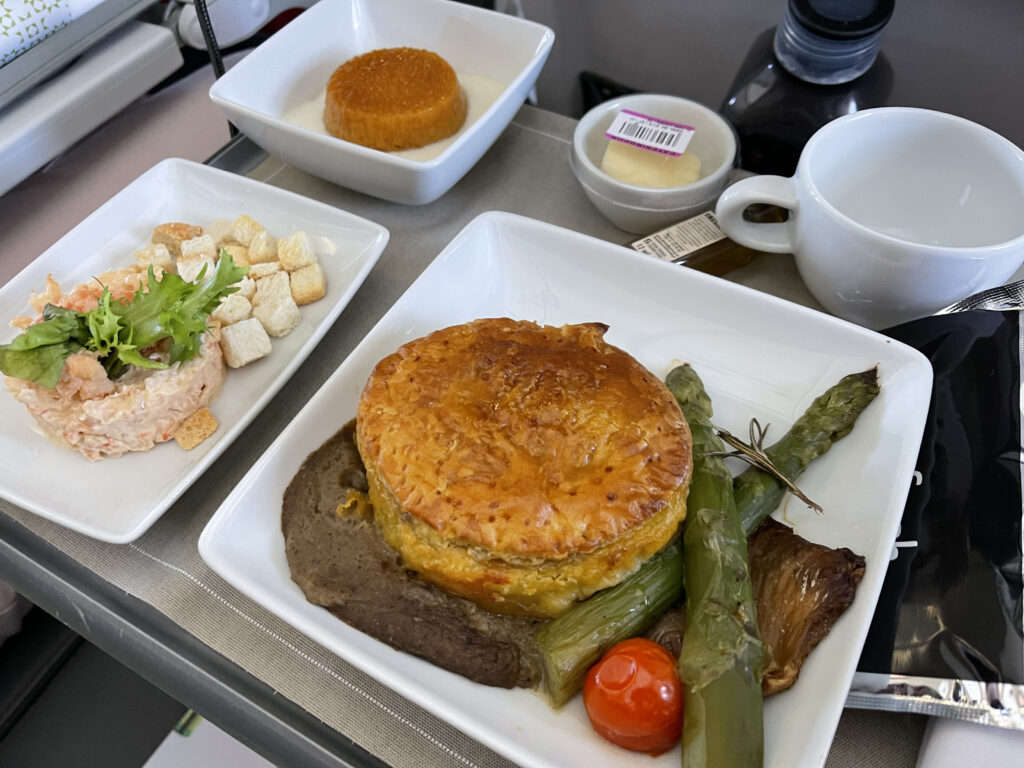 No inflight entertainment or connectivity was offered, but the seat offered both USB and AC mains power, which together with the effective tablet/phone holder in the seatback meant the flight passed quickly. 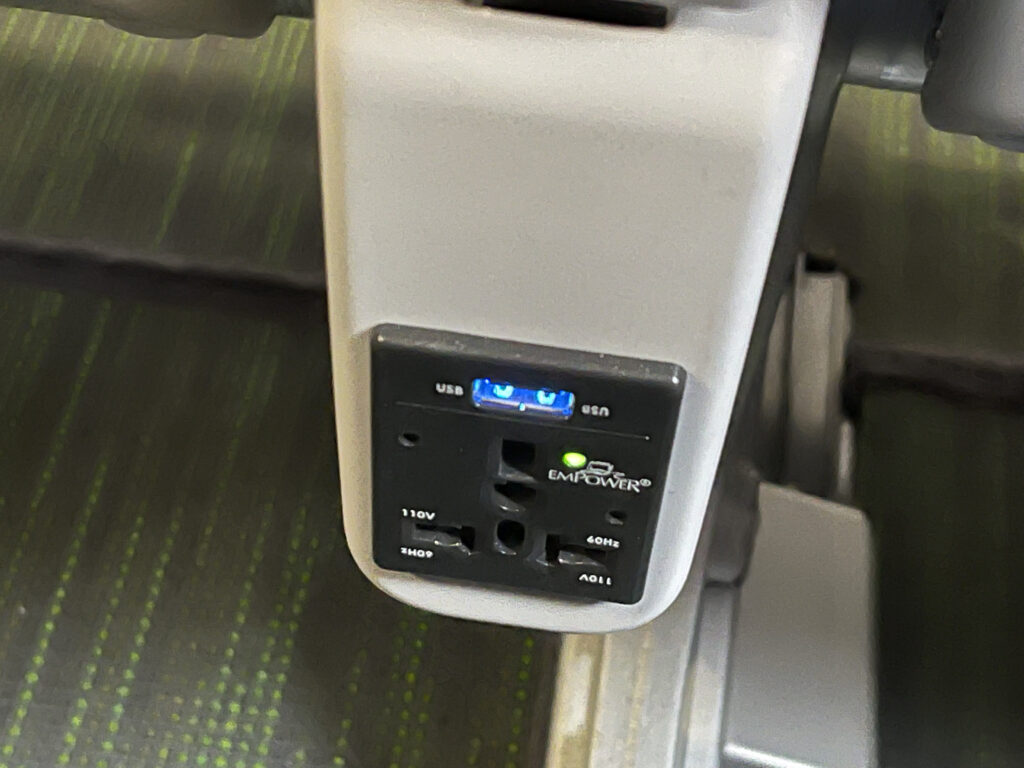 With an onward connection to the US the next day, TAP’s Lisbon baggage reclaim wasn’t put to the test, although all the luggage did make the plane across the Atlantic.

The only real faults — and they’re both pretty big ones — were around the preflight situation.

TAP’s website is, as previously mentioned, challenging, to the extent that the airline would do well to consider binning the entire thing and starting again. Booking was a pain, managing the booking was a pain, there was zero digitalisation of the vaccine certification process, and information was unclear.

The one bright spark here was TAP’s Twitter team, which responded to questions fully, helpfully and promptly, and were able to change connecting flights after a timetable change to one leg.

The second fault was as the airport. As your author travelled, the UK was in the midst of its early January Omicron variant spike, but you’d never have known it from the way that the outsourced ground handlers — Menzies, it seems — lined up passengers cheek by jowl during the boarding process, only to then line them up on the jetway and into the aircraft.

Information was given out by staff shouting, but they didn’t come nearly close enough to where passengers were sitting to be audible.

Overall, with Portugal fairly strict on COVID regulations, this was surprisingly poor, and is something for TAP to look to improve. 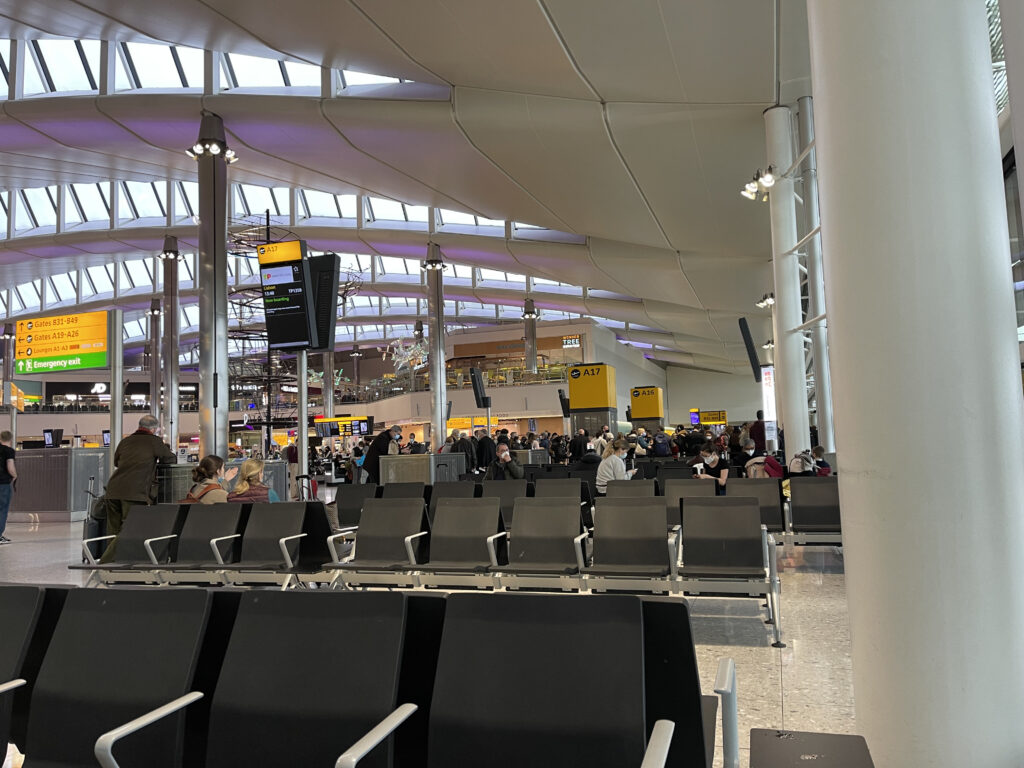 As for the flight, though, high marks to TAP for spacious seating, power and a tablet holder, pleasant crew and very low fares. This could well be a new high standard for Eurobusiness.