The airline confirms to Runway Girl Network that Eclipse is already on board one MAX 8 aircraft flying short-haul, with plans for more — and not just for the MAX. Flydubai intends to obtain a supplementary type certificate for Eclipse, allowing it to retrofit its existing 737-800 aircraft to replace the Geven Comoda recliner it previously used in this category.

The move paints the future picture of the all-737 airline’s fleet and passenger experience, split between the ten Thompson Vantage fully flat beds up front on longer-haul routes, the 12 new Eclipse seats on shorter routes, and a small subfleet of all-economy aircraft. It is an evolution of the airline’s plans — as discussed with RGN in 2017 — to put the Vantage cabins as the standard for the airlines’ MAX aircraft.

“Today flydubai operates a fleet of 55 aircraft, 22 of which have the Geven business class seats. We have nine all-economy aircraft and the remainder are configured with our full-flat business class product. Compared to the full-flat configuration, with HAECO seating we gain two seats in business class and six seats in economy class.”

In addition to the Eclipse seats, flydubai is also upgrading the shorthaul inflight entertainment to Safran’s RAVE Ultra system, with 4K capability alongside the ability for passengers to use their own Bluetooth headphones to the IFE system.

(Earlier this year, flydubai began offering a complimentary inflight entertainment streaming service — instead of seatback IFE from now-defunct Lumexis — in economy class on the 737-800s.)

The airline has spent over three years developing the Eclipse-based premium product for its operation. “We began developing this seat with HAECO Cabin Solutions and JPA Design in 2018,” Kerrison explains, noting that “the rollout for the new seat was delayed due to the pandemic and the changes to the delivery schedule.”

Indeed, RGN reported in February 2019 that HAECO and its undisclosed 737 MAX customer planned to launch Eclipse in the first quarter of 2020.

The flydubai implementation of Eclipse is certainly an attractive one, carrying over the design language from the Vantage implementation, with the calming blues and warm desert accent tones creating a modern, relaxing palette. The overall look and feel is a little bit darker than the Vantage cabin, and to this journalist’s eye at least that’s a pleasing change.

It’s especially super to see that the airline and its design and seatmaker partners have iterated to reduce the amount of off-white thermoplastic that’s visible, with the section below the inflight entertainment monitor being the same sort of anthracite-chocolate that wraps the monitor shroud and features on the inside of the privacy dividers. 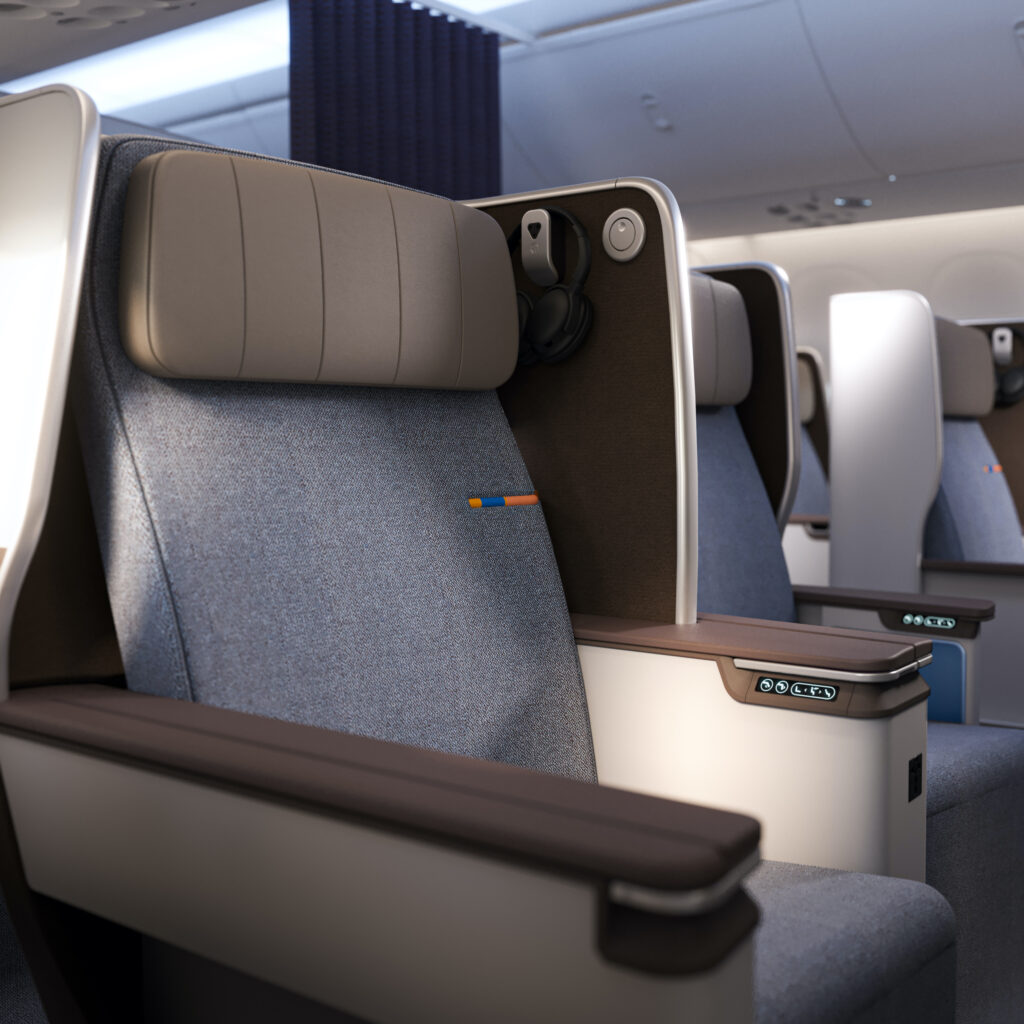 Of particular note is the rather neatly created storage shelf underneath the wide seatback monitor, which also offers a cupholder — ideal for those shorter flights where a cup of coffee or a glass of something more exciting is often particularly welcome. That’s a change to HAECO’s flip-down shelf, and, to your author’s mind at least, it’s a smart one: fewer moving and breakable parts.

Overall, both the product and the styling look excellent. For shorter routes within the flydubai network — the Middle East, northeast Africa, and even into the Indian subcontinent — this is a strong product that stands head and quite literally staggered shoulders ahead of the recliner competition.