Following hard on the heels of the August release of its fully featured economy class seat, Elemento, Italian seatmaker Geven and London-based design partner PriestmanGoode are moving forward with Materia, a new recliner seat that is aimed at the longhaul premium economy market as well as the shorthaul business class segment.

It’s an impressive step in strategic terms for Geven, which will be able to offer a brand new nose-to-tail seat product range for narrowbodies — basic economy Essenza and superEco, fully featured economy Elemento, and now recliner Materia — or, indeed, a wings-to-tail range for widebodies, where fully flat business class is the remaining gap ahead of the wings there.

From the front, Materia is easily recognisable as a member of its recliner class, with a slight emphasis on the shoulders-and-up area compared with the competition. The headrest curves, and an optional set of privacy wings appears on some of the renderings provided by Geven. 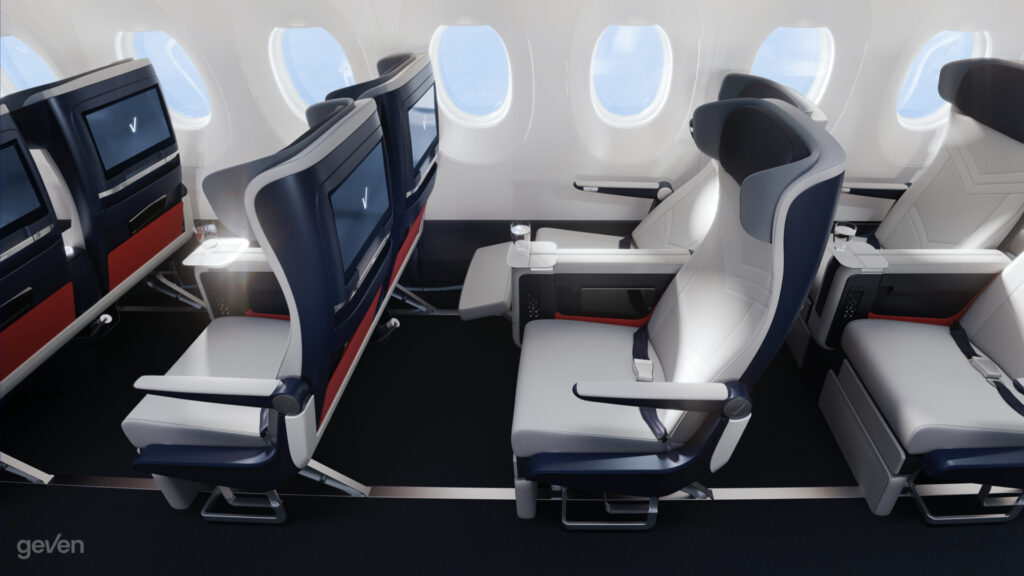 The real magic of Materia, though, looks to be in Geven’s Wave support system, which changes the way that the seat pan kinematic loading works.

“From one side the transition helps to avoid the the shear loads when you go and recline, on the other… when you try to compensate for the shear loads there is always some area of the seat pan that compresses the legs, especially behind the knees,” Geven research and development manager Pasquale Rapullini told RGN in September. “With Wave, we integrated a kinematic system below the seat that relaxes specifically that area and gives much more space for passengers to extend the legs.” 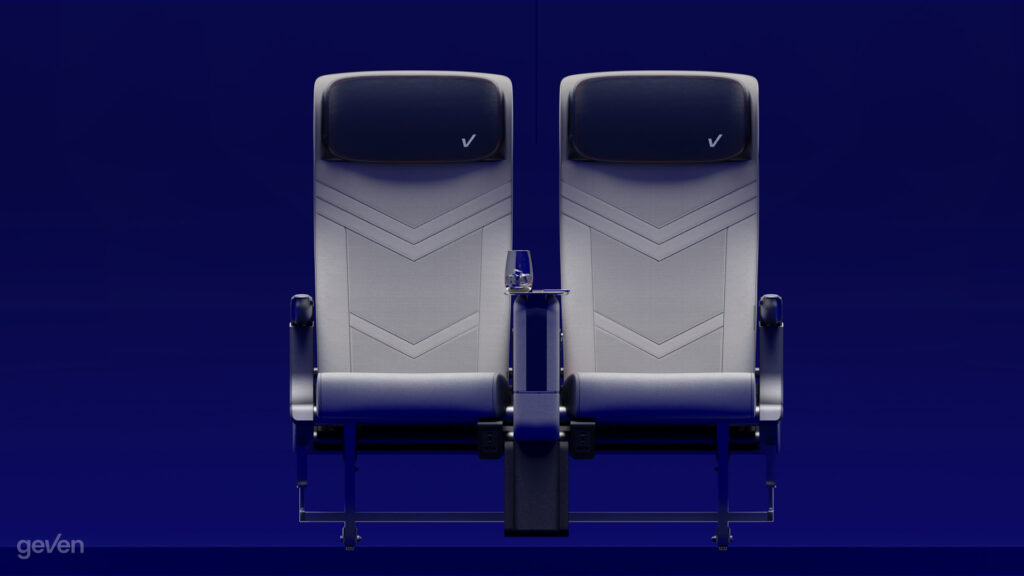 With the extra space in the Materia recliner-sized seat pan compared with the smaller Elemento economy seat, it will be interesting to see — and indeed feel — the difference between the two implementations of the Wave system.

On the other side of the seat, looking at the seatback, the inflight entertainment monitor (which maxes out at 15”) is dominant, but embedded neatly into the seat — and with the option instead of an integrated personal electronic device holder for airlines without seatback IFE. 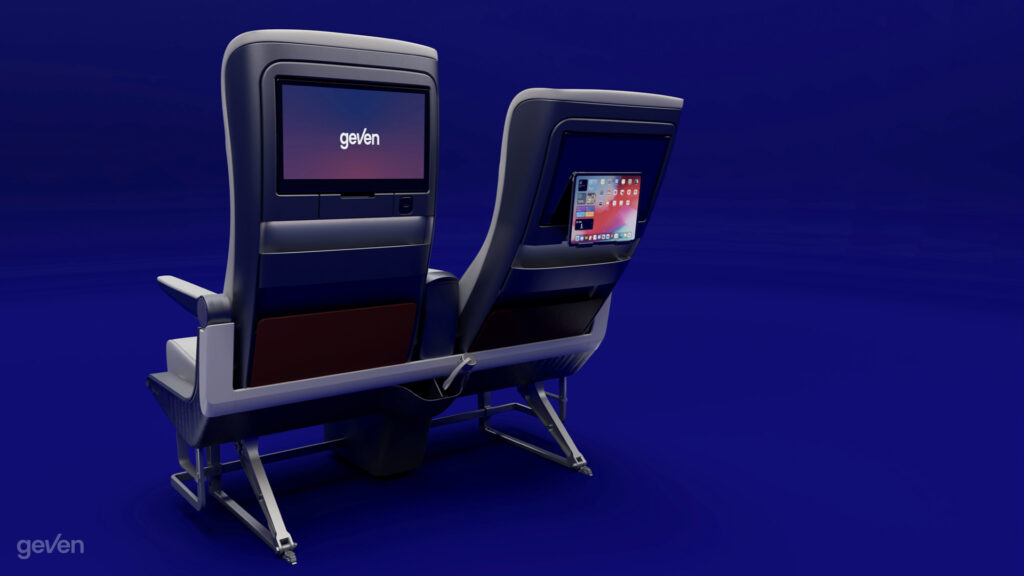 Storage includes a seatback pocket and a side pocket in the centre console, which also features a small cocktail table for the shared use of both passengers.

Armrests are slimline and it would appear that the US DOT disabled traveller accessibility requirements are met by the armrest swivelling upwards and out of the way. Legrests and footrests are available in all seat rows.

Citing composite materials and new cushion technologies, Geven’s Rapullini highlights that “Materia is the second seat model of the next generation platform which embodies our passenger centric philosophy.”

Partner PriestmanGoode’s design director Daniel MacInnes highlights the impressive speed with which Materia — and the rest of the new Geven platform — have been created. “We began working on this next generation of seats in September 2020. What we have achieved in that time is testament to the outstanding capabilities of both teams, and shows that great collaborations can lead to great innovation. The next-generation seats provide Geven with a strong offer to support the aviation industry as we start to move towards recovery.”

Fundamentally, having another seatmaker able to offer nose-to-tail (or wings-to-tail) seating products is a positive move, and if the kinematic ergonomic comfort of Wave lives up to its promises, Materia could even end up being the premium economy product of choice for passengers. 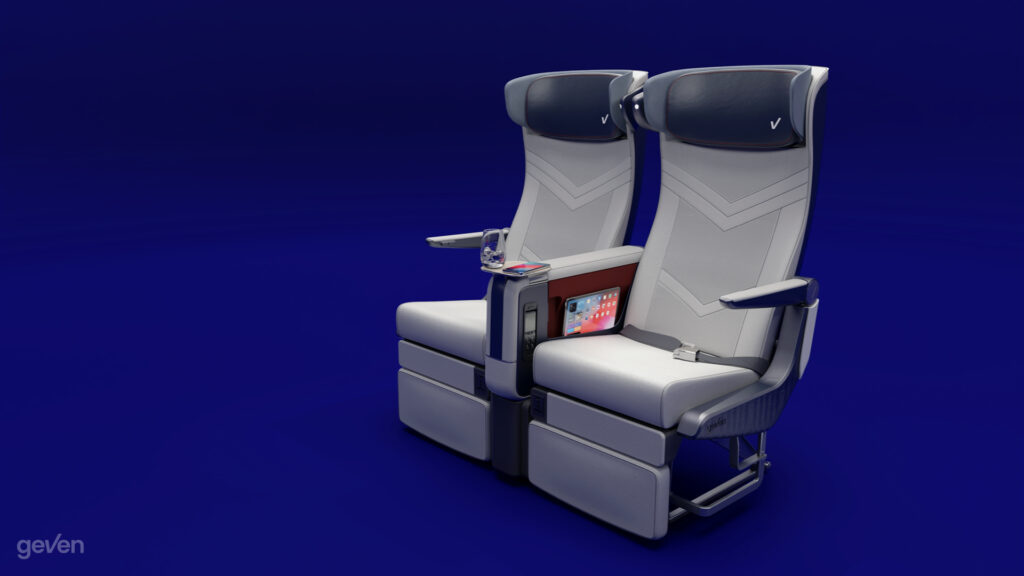