With its newest seat Elemento, Italian seatmaker Geven is marking two firsts: the first of what it calls the “next generation” of its aircraft seating family, and the first seat produced in partnership with London-based design house PriestmanGoode.

Elemento is aimed at the more fully featured end of the market, with Geven citing “a host of features aimed at increasing passenger experience and comfort” alongside a modular design that “allows for easier installation and integration of the most varied latest generation monitors and PED holders as well as ease of integration into both wide- and narrow-body aircraft”.

Those features include the options to integrate today’s larger inflight entertainment system monitors, seatback holders for personal electronic devices, integrated table lighting, an adjustable privacy headrest and a cocktail table, as well as a mesh water bottle holder between the knees attached to the seatback pocket. 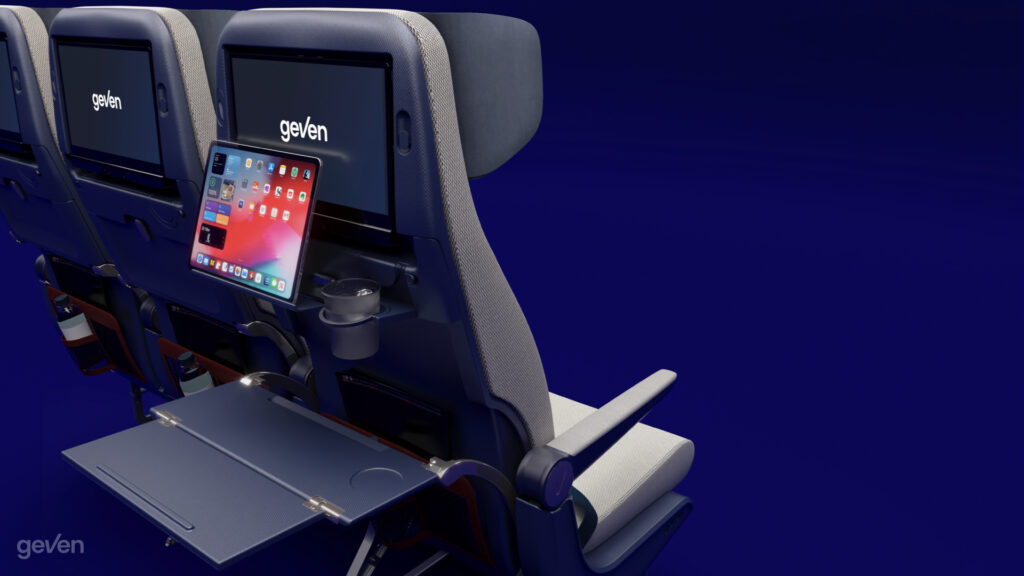 The name is a successor to the existing Elemento seat dating back some five years, and the seat marks an evolution of Geven’s seat family, with its low-cost carrier Essenza seat — seen from European ultra-low-cost carrier Wizz Air to the Lufthansa Group’s standard shorthaul product — perhaps the best known of what is now the previous generation.

Elemento is shown with a variety of options for airlines to choose, including either a single-fold or bifold table, with the bifold option seemingly enabling the choice of the PED holder and cup holder which unfold via a flip-down movement from their location under the IFE monitor and above the table. 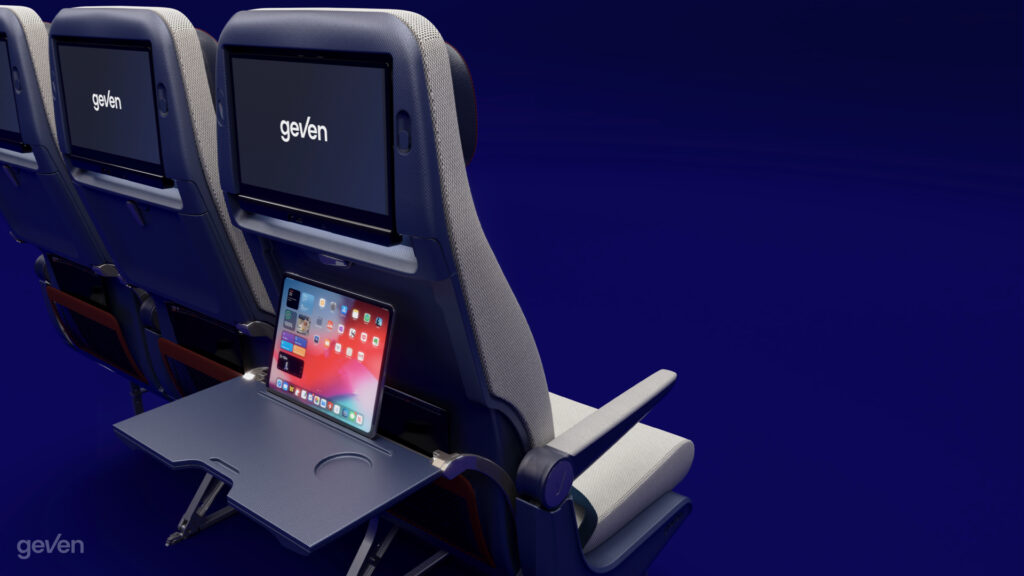 A number of headrest options are available, including a striking large individual wraparound side headrest shroud reminiscent both of those in newer premium economy seats and of the single-side shroud Etihad débuted on its A380 and 787 seats in 2014. This is not only super for longer haul flying — avoiding the situation where a snoozing passenger’s head flops onto their neighbour’s shoulder — but also adds privacy and, dare we say, reduces the cheek-by-jowl feeling that may be surprising to many travellers in the COVID-19 context. 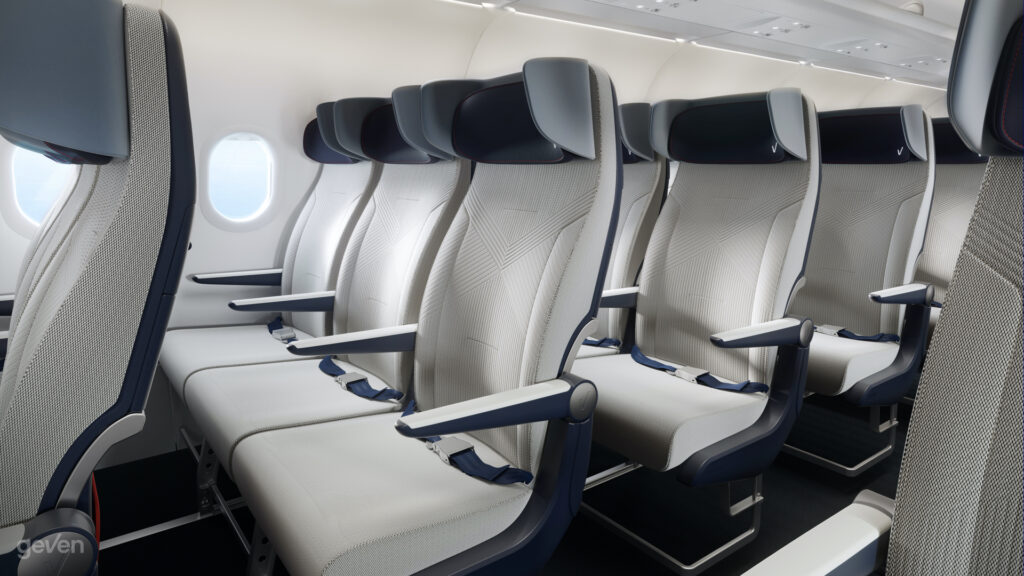 Striking also is the amount of cushioning provided, both at seat pan level and in the lower back and lumbar areas of the seat. Even in the fully featured economy seat segment, this is an unusual amount of padding.

The design language for Geven’s next-generation seat family is also revealed in Elemento, with sculpted, organic curves in the seatback and headrest matched by a firm set of angles in the armrest.

Geven is also boosting the focus on its colour, materials and finish, showcasing premium-feel dress covers and an elegant (if grey-and-blue) palette that was “inspired by the Geven brand colors and the Italian coastline at sunset”.

Geven’s recently introduced v-tick logo element also makes several appearances, whether on the armrest pivot, the headrest or as part of the pattern on the seat fabric mesh.

Airlines, of course, will make their own branding choices from headrest to seat pan, but it’s always interesting to see what signals a seatmaker is making about the market segmentation of its product with CMF. 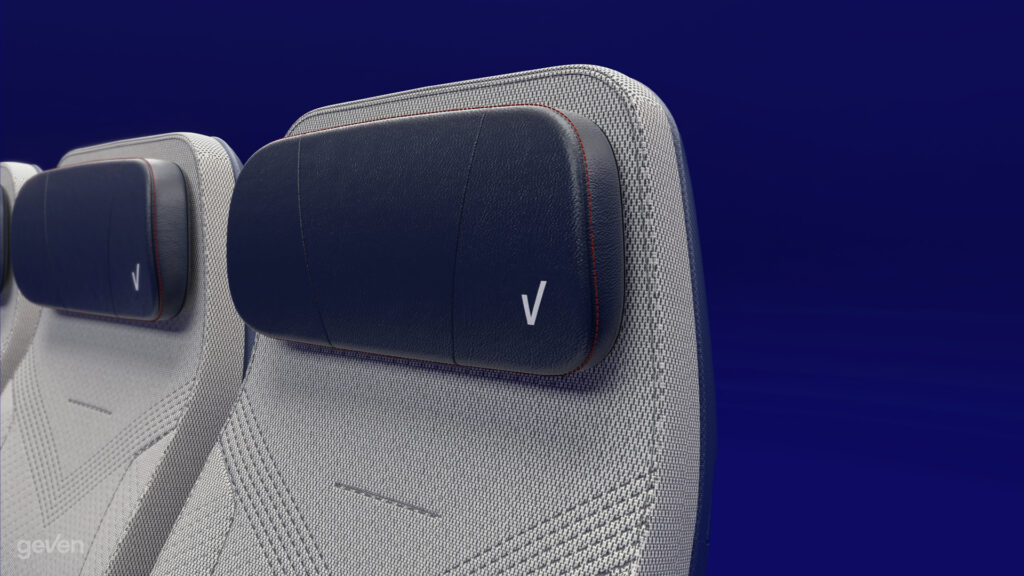 Speaking of those signals, poring through the dozen-plus renders Geven has created for its release, it’s notable that Elemento is presented only in the narrowbody environment, and even then on a pre-Airspace Airbus A320 family cabin, with its tell-tale windows and bins. 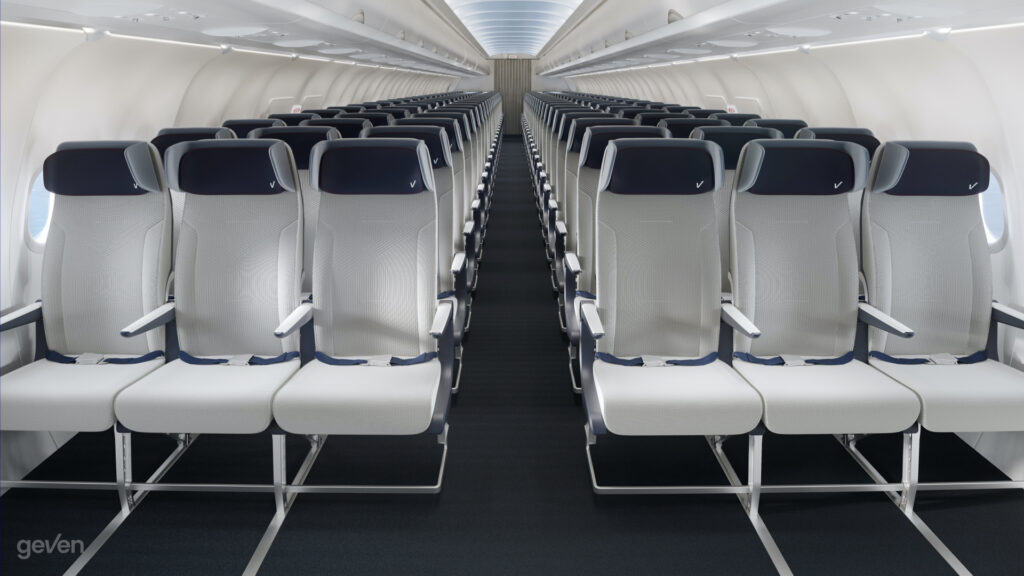 It’s perhaps a sign of our times to see a new seat aimed at the narrowbody market, particularly a fully featured seat, necessary for full-service airlines’ single-aisle longhaul ambitions with aircraft like the A321neo’s A321XLR variant.