British Airways is at a crossroads in passenger experience, with its new Collins Aerospace Super Diamond doored mini-suites arriving on its new Airbus A350 aircraft and being refitted onto older Boeing 777s.

On paper, this is a massive jump in #PaxEx from the previous generation, also produced by Collins, and when the airline offered flights to Toronto (and connections from my home airport of Lyon) to enable me to clamber all over the product on a regular revenue flight, I jumped at the chance to look into the hard product.

The cabin is split into two: eleven rows between doors one and two, and three rows behind. Arriving onto the aircraft via door 2L, the immediate view is of an empty Club Kitchen, which is essentially a pair of mini-fridges and open storage for bottles, but all this is packed away on boarding. Some thought on how to make this space feel a bit more attractive and welcoming for passengers arriving on board could be useful. 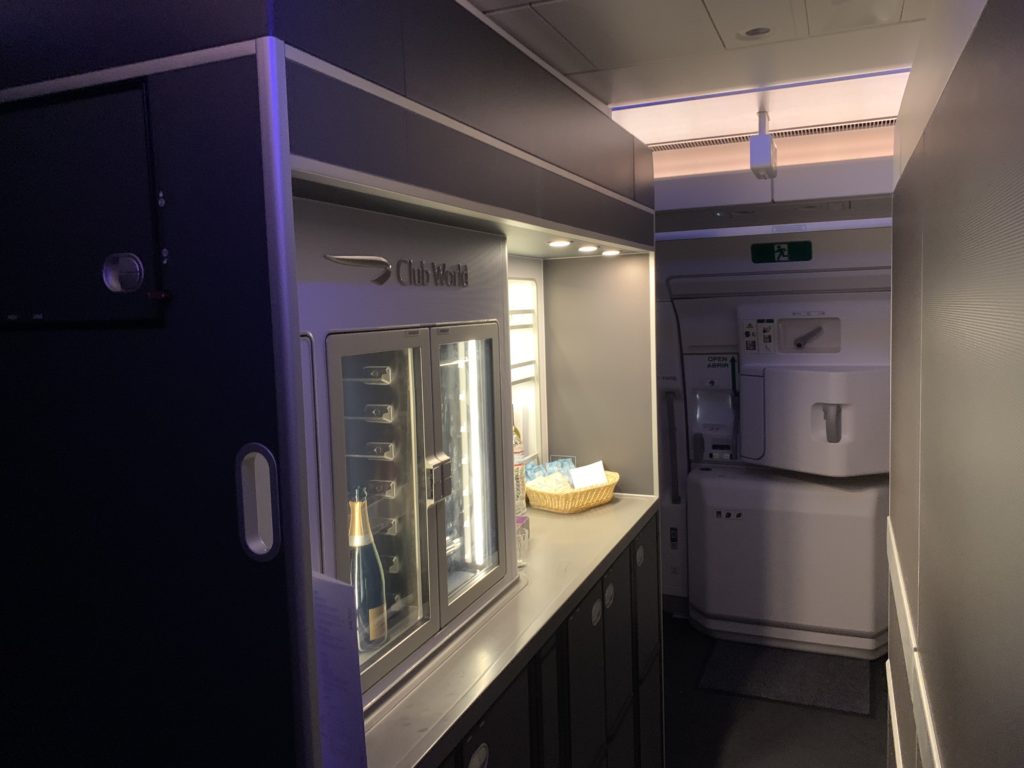 The Club Kitchen takes up all the galley space at doors 2, and is a bit humdrum. Image: John Walton

The extra length of the A350-1000 gives the forward space something of an open dormitory feel, and indeed sitting towards the rear of this cabin it does feel very long, and one feels like a good bit of moodlighting could cut down on the monochrome thermoplastics. 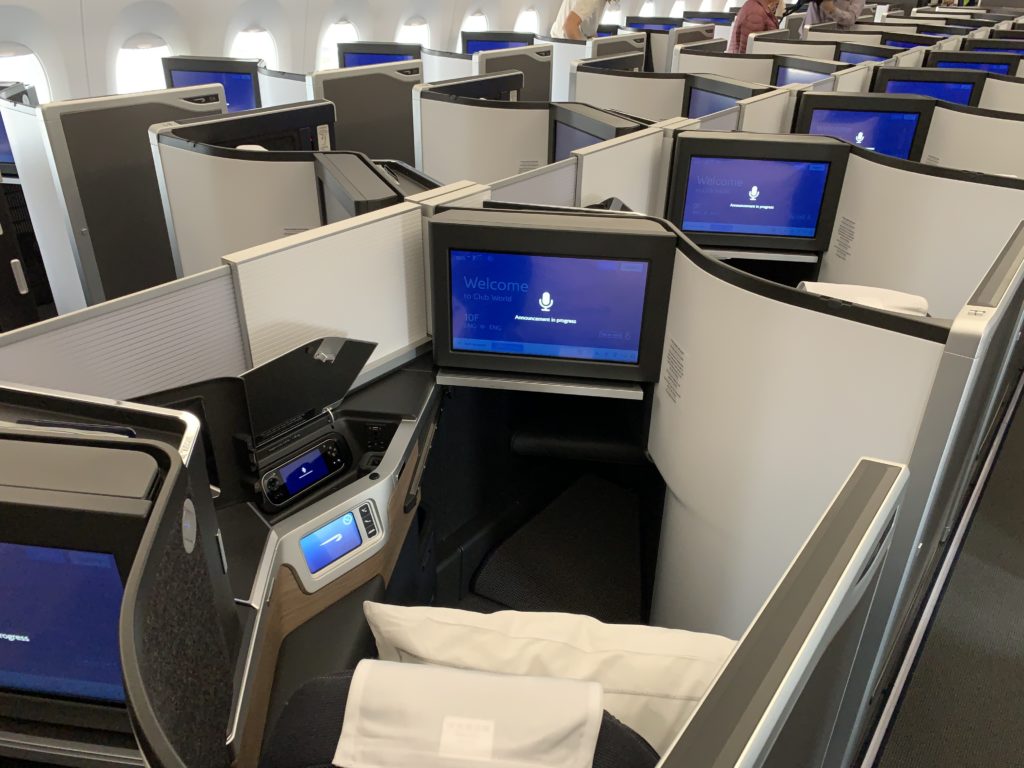 With an absence of thoughtful moodlghting, the effect on boarding is very much white thermoplastic. Image: John Walton

The Club Suite is the decade-old Collins Aerospace (previously Rockwell Collins and before that B/E Aerospace) Super Diamond seat, but with a door. One could say that the door brings “elements of Elements”, the next-gen herringbone from Collins.

It’s a huge upgrade from the forwards-backwards product that was last refreshed in 2006, based on a 2003 redesign of the 2000 yin-yang product that was the world’s first business class flatbed.

The general effect is attractive in a very sedate and undistinctive sort of way. Nothing says “this is British Airways”, which may well be the point: I noted that pretty much everything on this aircraft was bilingual English-Spanish, and indeed if BA changed the color on the screens to red, you could be looking at an Iberia cabin. I’m trying not to say “this is a very boring cabin”, but this is a very boring cabin.

This was as far as BA got with mood lighting. Most airlines try to take away the beige… Image: John Walton

The fit and finish of the seat was mostly very good, which is one of the reasons why an airline would choose a product designed in 2010: the manufacturer knows how to make it.

Pleasingly for passengers who like a view, the shroud and the screen get out of the way of the windows.

The door is also a big part of the seat, and congratulations to BA and to Collins for managing to make this only a semi-Beyoncé door: it does not feel like a stuck-on addition, which is wise given the size of the A350’s cabin.

It slides forwards from a locked position, but given the relatively low height of the suite it doesn’t add a huge amount of privacy, and certainly feels much less private than the Qatar Airways Qsuite, also manufactured by Collins.

These doors are only semi-Beyoncé, and don’t feel stuck-on like others have. Image: John Walton

In the details, some are great, but some less so

The amount of storage at the seat is very decent: three closable compartments and a water-bottle holder at the knee area, although the electronics compartment requires crew to check every one prior to departure to ensure nothing is plugged in, which is something of a faff.

But it’s not an entirely rosy picture. There is a baffling choice of very flimsy and frankly ugly thermal venting material around the footwell area that is not particularly well attached and which moves at the slightest touch. The angled surface on the near edge of the footwell is also a bit wonky, while the foam insert between the side of the seat and the cabin wall is already getting grubby. 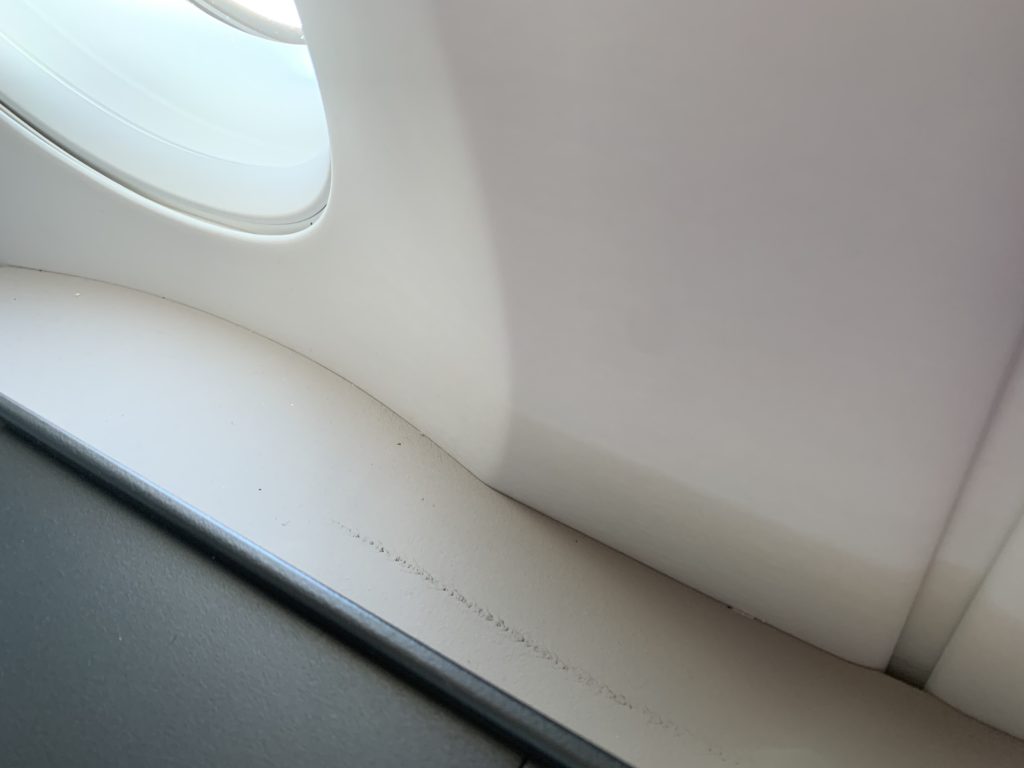 The foam between the seat and the sidewall is already scuffed, grubby and a bit of a detritus magnet. Image: John Walton

British Airways chose not to install overhead air vents in the cabin, which is unfortunate. Nor has it integrated the aircraft cameras with the inflight entertainment system, which was on the whole fine, although the Panasonic screens felt a little clunky when moving between content.

Moreover BA’s headphones are pretty poor and, inexcusably, not noise-cancelling.

The table is the standard Super Diamond forward-sliding bifold, and it was largely effective, with the slight proviso that the halfway mechanism on the table on my return flight was not clicking correctly into place.

On a more subjective note, I did not care for either the look or feel of the shrouding material, which is a sort of scratchy felted fabric that reminds me of low-budget school carpet. Rubbing against it while sleeping felt somewhat unpleasant.

In sleeping mode, though, this seat felt cramped — substantially more so than other Super Diamond implementations, and actually more so than the existing British Airways seat. I think this may be the result of the engineering around the space by the knees.

With previous examples of the seat, including the Qatar Airways version that was the launch version of Super Diamond, this space was given over to a low storage locker. Usefully, when sleeping in a side position, this allowed the knees to be placed on top of this locker, generating a feeling of much more space. 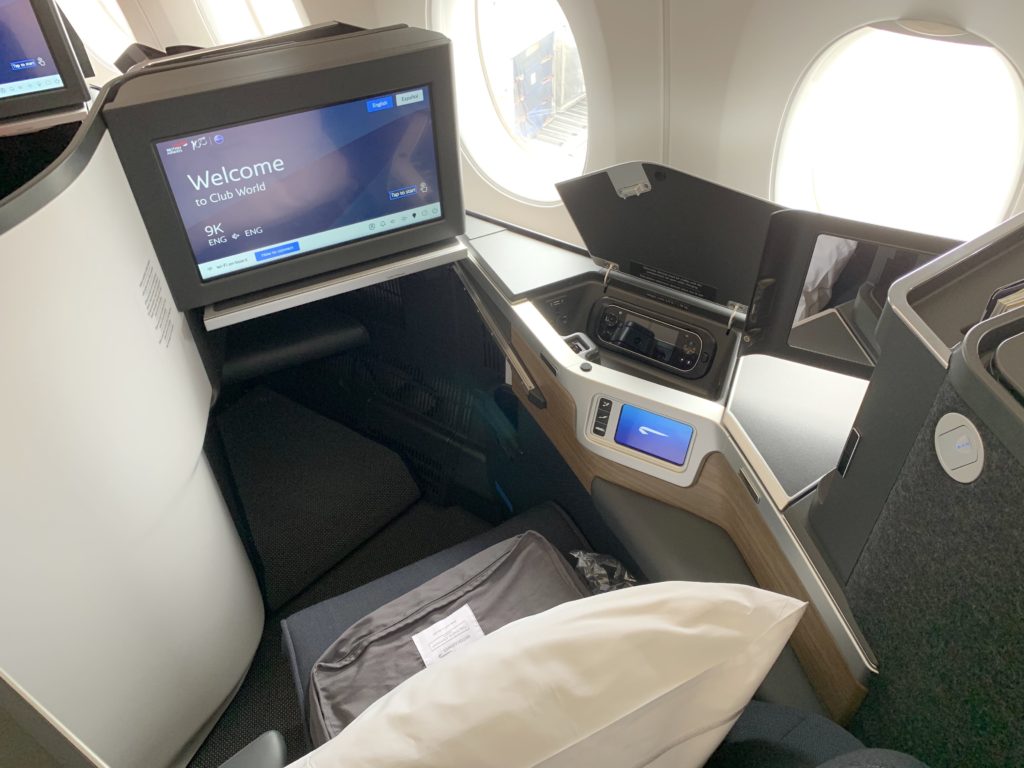 The seat is nonetheless a huge improvement on the prior generation. Image: John Walton

On the other side of the seat, the Qatar Airways version is also more roundly sculpted, allowing for more space to move the knees if sleeping on that side. Both armrests on that version also drop, creating even more space. 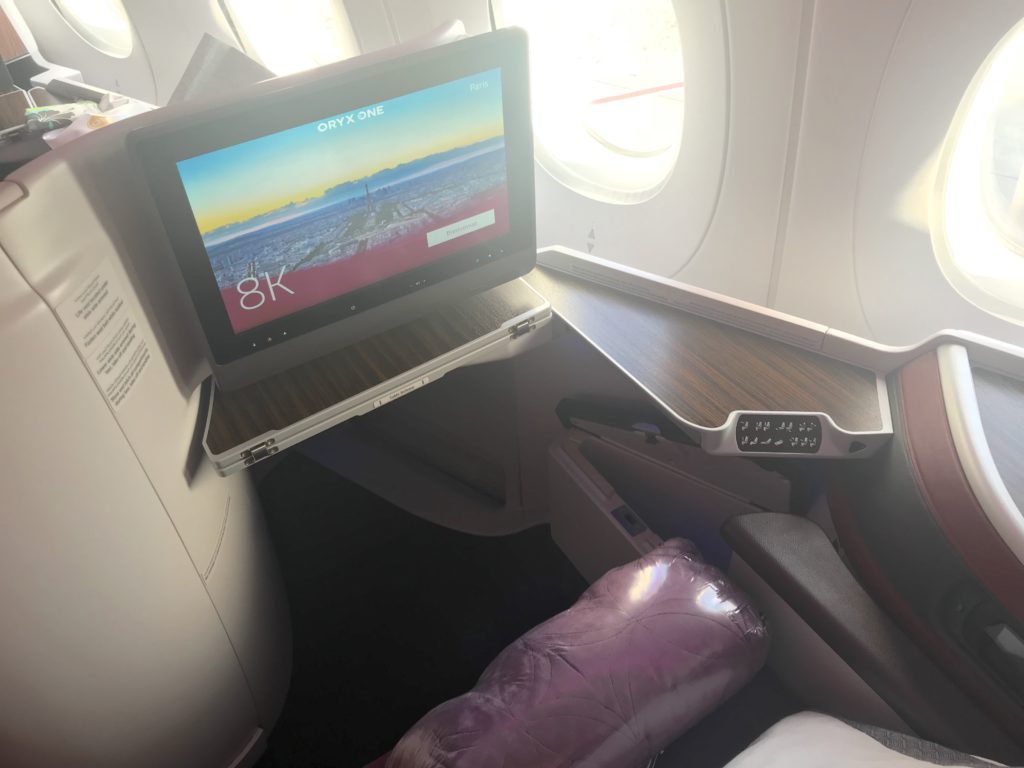 Here on the Qatar Airways version, you can see there is more room at the knee when asleep. Image: John Walton

It’s unfortunate that one of the key contact points was with the table and the knees while sleeping. Perhaps I’m just 6’3” and thus my knees end up further towards the toe end of the seat than most passengers, but my height is not absurd, and it’s frustrating that this is a height issue: could this not have been fixed by a slight reorganization of the monitor assembly?

The cushioning was also very hard, and the sheet pad (I can’t in good faith call it a mattress) looked designed for the previous generation of seat, and even adding the duvet on top and sleeping under the very thin blanket didn’t help. I know Collins has inflatable cushion technology, since I used it recently on Lufthansa’s Diamond seat. Why not here? 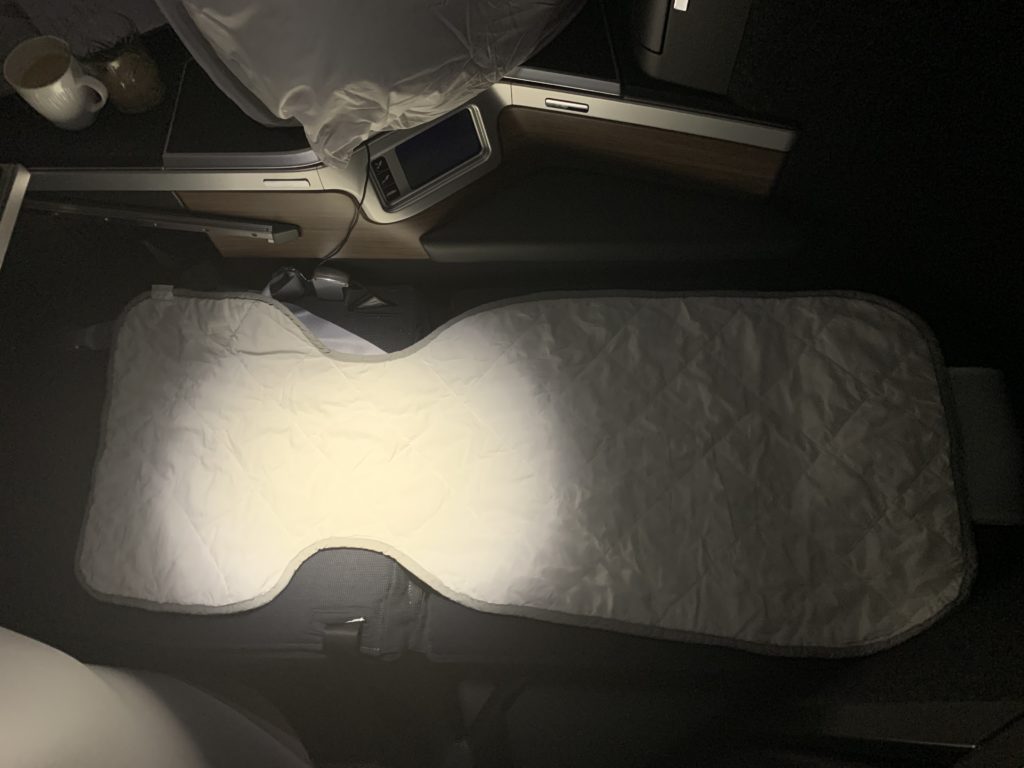 The”mattress pad” is thin and seems made for another seat. Image: John Walton

(I also note that BA needs to read the room on inflight waste: bedding is left on the seat in a zip pouch, but everything is also wrapped in plastic. This feels very needlessly wasteful.)

There are just three lavatories for the 56 Club World passengers, and despite a magnetic stanchion rope between business and premium economy I noted travelers from World Traveller Plus making their way forward (understandable; there are only six lavatories for the entire rest of the aircraft) to use the loo. This made for queues five or six deep around doors 2 ahead of landing at Heathrow, which is not ideal, particularly when the crew are trying to pack up the drinks and catering storage space in the Club Kitchen.

In conclusion, the new seat it’s much better than the old seat, and with a few adjustments it will likely serve BA fairly well, even with the constrained sleeping space.

But it’s not even the best Super Diamond I’ve experienced, and it feels like very many tricks were missed.

British Airways provided flights (and connections from my home airport of Lyon) to enable this review.