In true Virgin style, the reveal of Virgin Atlantic’s new Airbus A350 interiors at its headquarters near Gatwick was slick, design-oriented and mood-lit. Upper Class’ Safran Cirrus NG herringbone, new lounge space replacing the previous bars, premium economy’s Collins MiQ, and Recaro’s CL3710 are all great products that represent an advance on the current state of Virgin’s passenger experience. But, crucially for an airline that comes in for criticism of being branding style over hard product substance, the new business class lacks a door.

A privacy divider extending perhaps 20-30cm (8-12 inches) over the arm space instead of a door is a considered decision on Virgin’s part, and indeed the airline’s executives were all fully on-message in highlighting the airline’s belief that its #PaxEx is inherently social.

“For us, what was really important was having a privacy divider to be able to give you privacy between you and customers who are sitting diagonally from you,” Daniel Kerzner, vice president for customer experience, told Runway Girl Network, highlighting also that the carrier had tested a variety of options with focus groups of passengers. “In a lot of the research that we did we found that the door actually became a barrier between you and the service on board. But it also in most cases is a partial door anyways. When we looked at the possibility, either in the seat that we have or in other seats that are on the market, the door, being a partial door, didn’t give you full privacy.”

Yet the professed logic from the airline around the reasoning behind not selecting doors was not entirely consistent.

“When you’re in the cabin, whether that privacy divider went the full way or not, if crew members or other passengers are walking by, they can still see you in that door,” Kerzner said. “What was really important was that we had the privacy that you need when you’re sitting in the seat but not getting in the way of what the service offering is, with the exception of the airlines that are flying a full cabin where you have a floor-to-ceiling door.”

RGN sought to understand the logic that the door wasn’t useful both because the crew could still see in, and the door cut off contact with the crew. And so, RGN continued to dive into the details with Gareth Salt, A350 programme director, and Mark Croucher, head of customer experience and CRM at Virgin Holidays, newly moved over from the A350 programme.

“In reality,” Salt noted, “we want to promote interaction with our crew. Even with a full door, in reality you don’t have a private space unless it’s floor-to-ceiling. We didn’t feel a value in the full door because we felt it prohibited that exchange.” 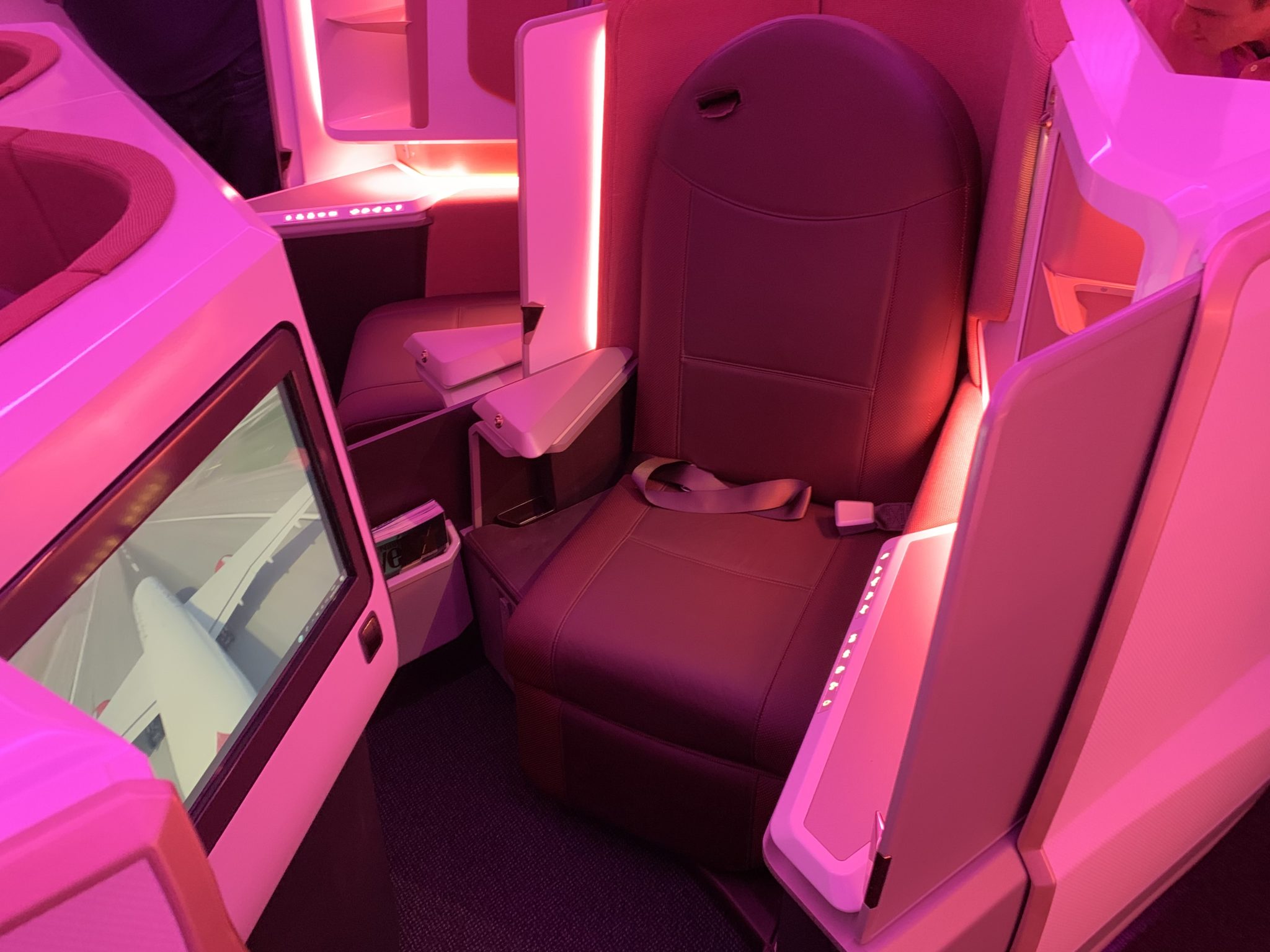 The Cirrus NG’s privacy divider, here at its full extension, is not a door. Image: John Walton

Continued Croucher, “One of the things that we pride ourselves on with our current Upper Class Suite is the openness of the cabin. Of course, over time that’s become something of a challenge for us: privacy is becoming more important. For us, the seat we’ve got now is the perfect place to be for us.”

RGN raised the question of the flexible “flappy door” offered by Safran and shown at the Aircraft Interiors Expo as an option.

Emergency egress questions about business class mini-suites? @SafranSeats’ solution is the flexible door, which I’m calling the #KoolAidModel: you just burst through the wall. This is smart #PaxEx design and updated from what we saw last year. #AIX19 #avgeek pic.twitter.com/eRCHeStdKy

“It’s a fair point,” Croucher said. “I’m not sure the flappy door really is the most sophisticated solution. The door is a conversation point for many people. It’s very on trend. It’s a standard offering. But the flappy door for me just wasn’t — or isn’t — sophisticated enough. When you look at the cabin design we’ve put in, all of the trim and finish you can see the level of detail and attention that we go down to. There’s no way of making that door work in that scenario, keeping that social angle and the trim and finish that we’ve got, and keeping the cabin as open.” 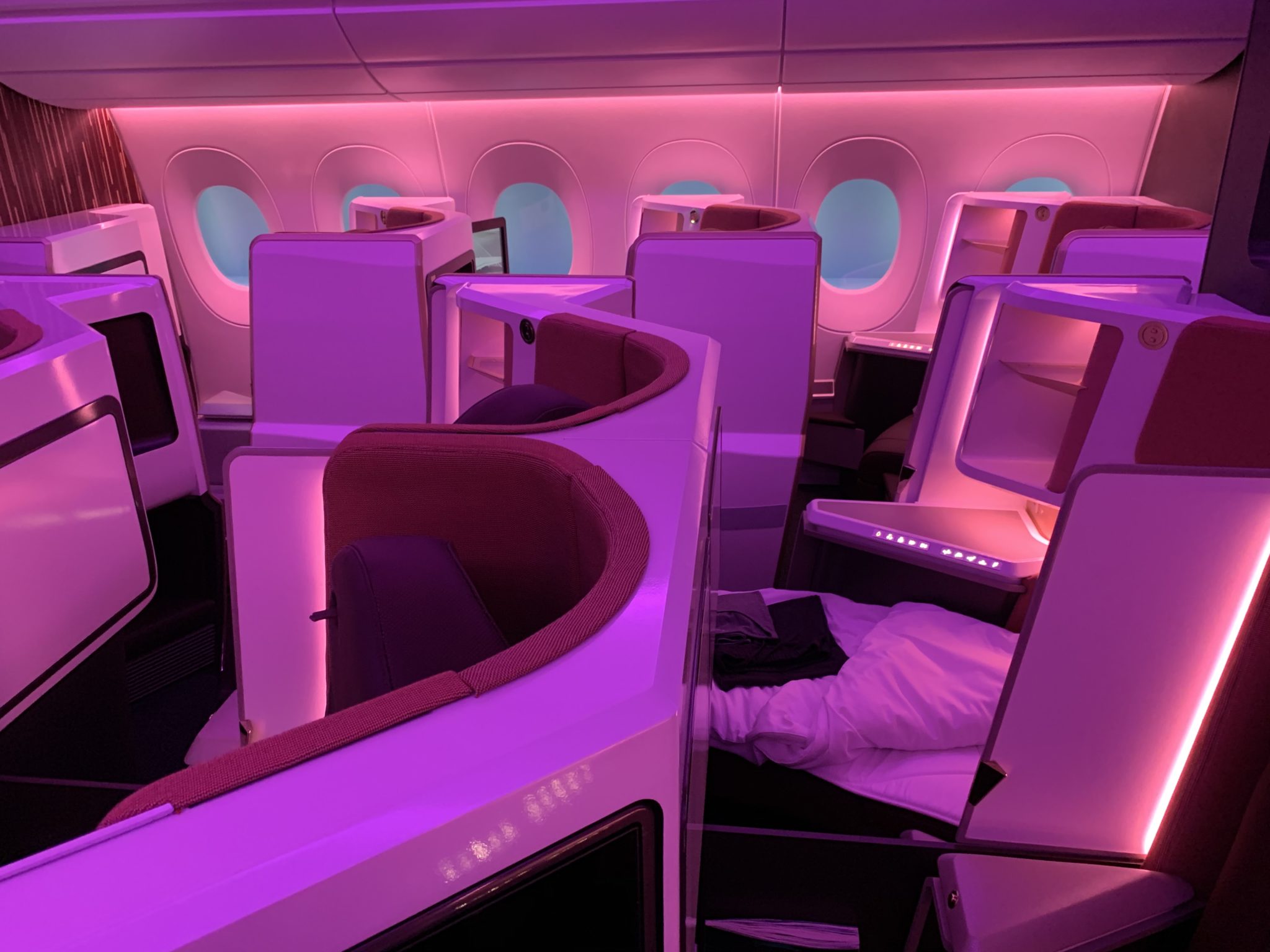 The V-shaped centre section is similar to what Virgin offers on its 747 today. Image: John Walton

Openness, Virgin execs said, was also the reason behind the airline choosing what is for now a unique configuration, with the seats in a mixed herringbone layout featuring the centre section pointing towards the aisle and the windows.

“There were two big factors” towards this decision, Kerzner explained. “One, people wanted to have the light, the experience of facing outwards, whether it was a window or facing towards the window. The other big factor in this was the centre seats actually give you the possibility to be closer together to the person beside you, because your legs are facing out towards the aisle and out towards the window, so your bodies are actually closer together if you wanted to be able to have a dialogue, to be able to share a meal together, and you still have the privacy with the privacy divider. What we found is the experience of people who are traveling together is better, and the experience of people who are not traveling together is not negatively impacted by that configuration.” 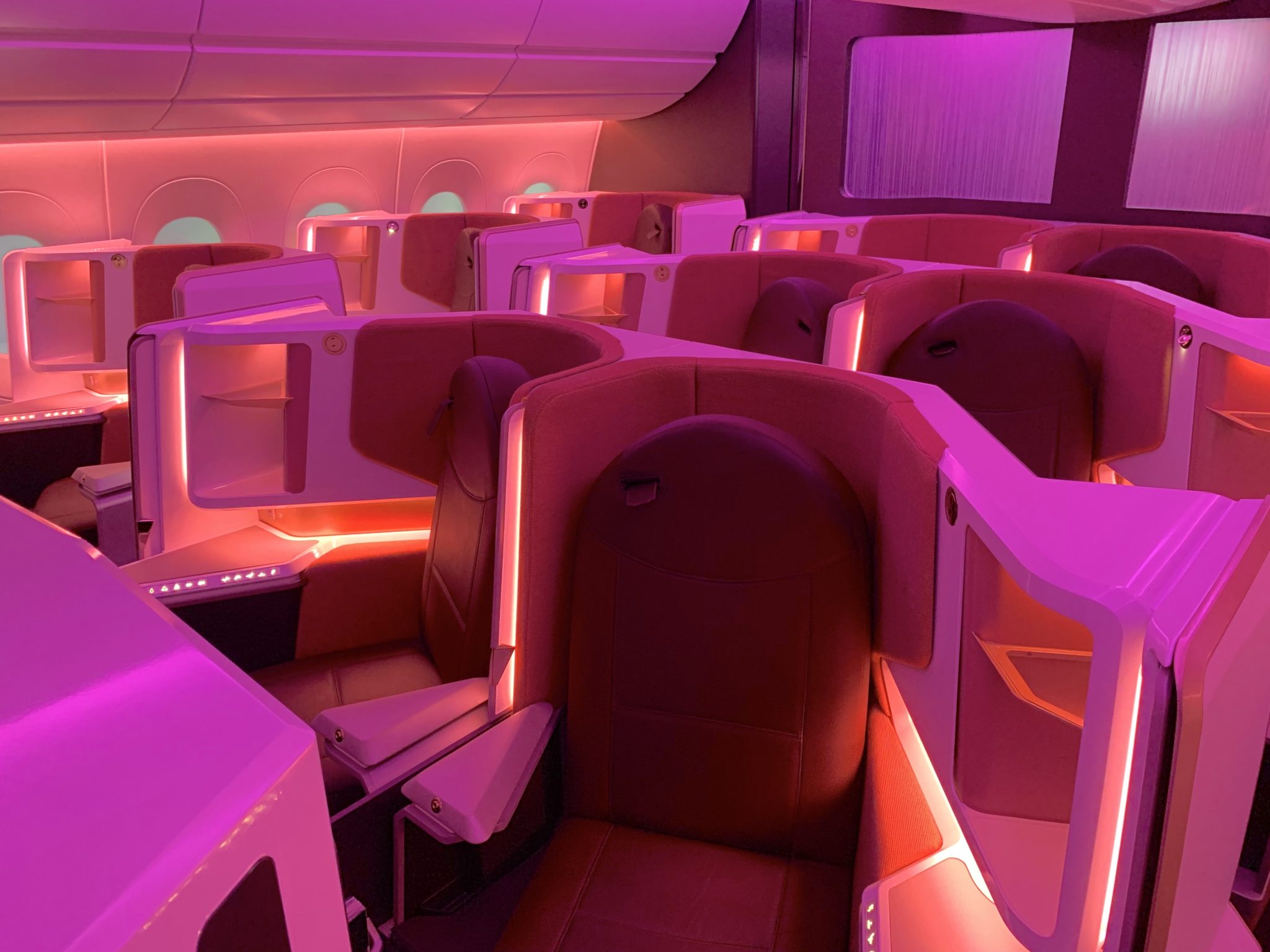 Virgin is the first airline to have all seats in the cabin pointing towards the windows and away from the centreline. Image: John Walton

Virgin Atlantic’s in-house design team has apparently spent three years with Safran (and indeed Zodiac prior to the takeover and rebranding) working to “create a product that is different than others have”, Kerzner noted. Yet none of the Virgin Atlantic executives had a ready answer for why they put trust in Safran to develop what is at this point a relatively highly customized seat on time, to a decent quality and to an acceptable reliability.

Given Safran’s history of leaving United 777s stuck on the tarmac at Boeing awaiting Optima seats, and Cathay Pacific’s ongoing problems with its Cirrus III A350-900 seats, the true first test of the product will be in achieving deliveries on time and to quality for the expected first flight in August — which has already slipped from “early 2019” at the time of ordering at the Farnborough Air Show three years ago. 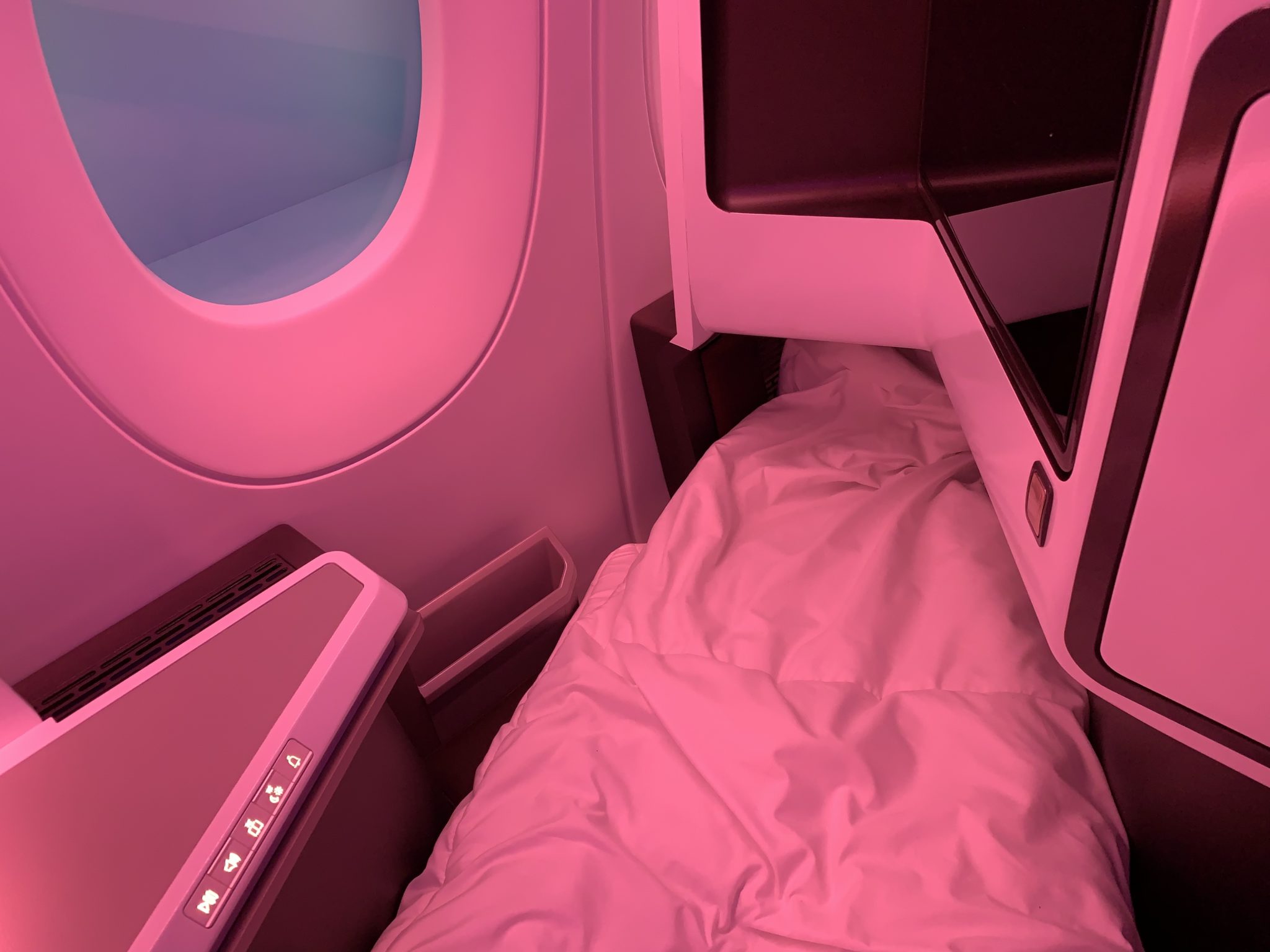