The Crystal Cabin Awards, presented by the Hamburg Aviation Cluster at the Aircraft Interiors Expo each April, showcase the passenger experience innovations that can make a real difference to the future of commercial aviation.

Sometimes the core improvement of a year is a little thing — one of those innovations that makes every flight just that little bit better, like Mohawk Air’s stain-resistant carpet, which improves the lifespan of the most trafficked material on the plane, or the Schneller AirFilm flex, a lightweight decorative laminate created to cover complex curves, or easy-refit LED lighting systems like STG Aerospace’s liTeMood or Cobalt’s Spectrum.

F/LIST’s wood effect flooring is another impressive technical innovation that one would entirely expect to find in a first or business class cabin over the next few years. 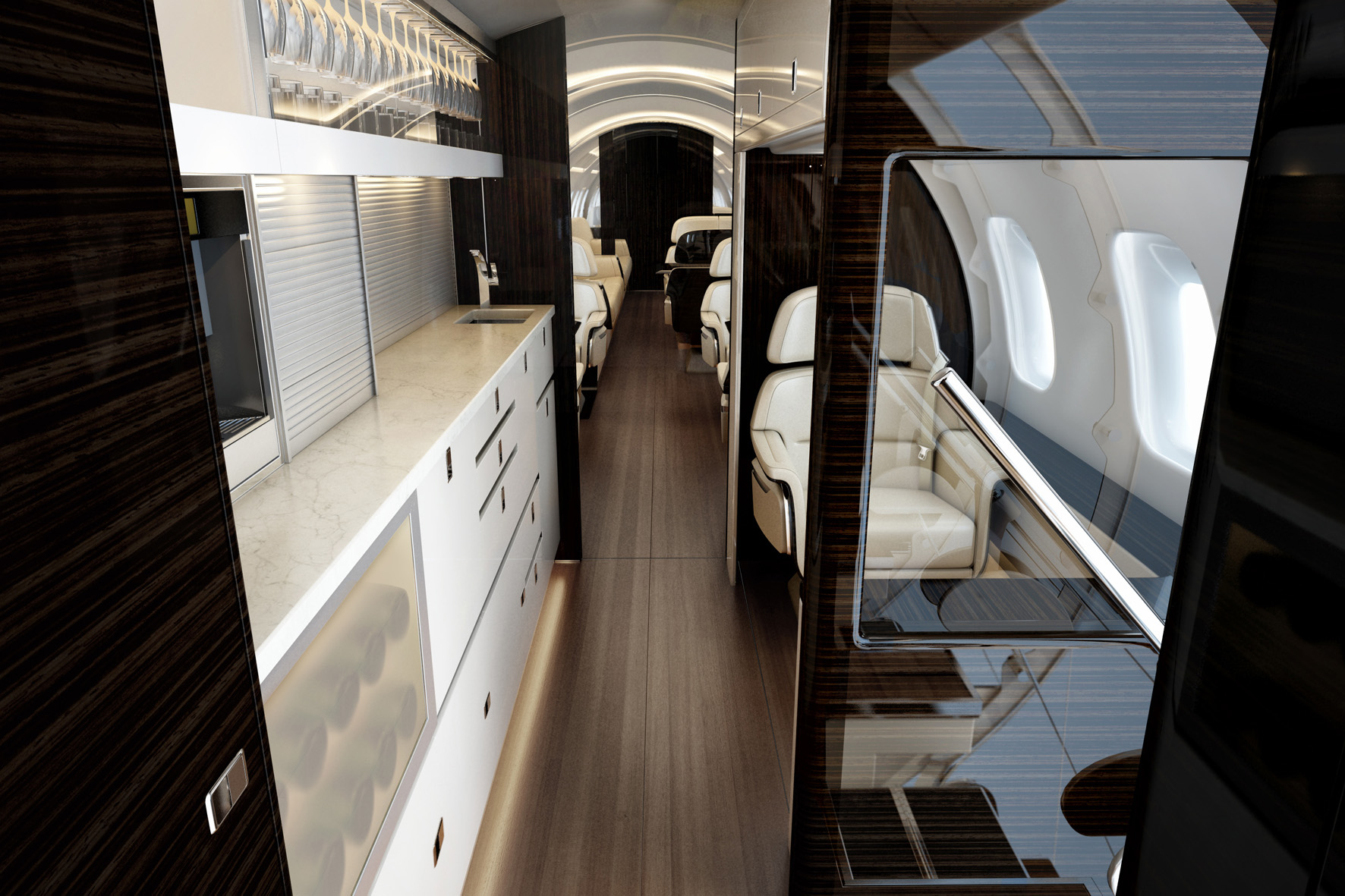 Sometimes it’s a massive screen for inflight entertainment, like the 22” or 26” portrait-orientation Digital Sky touchscreen from Thales (with B/E and Tangerine), or a tiny one, like Skylights’ SkyTheaters immersive goggles, which work for both 2D and 3D entertainment. Sometimes it’s the technology that governs how we interact with the hard product, like Reaktor Aero’s Nordic Sky IFE UX design for Finnair’s A350, Scholz & Volkmer’s implementation for Lufthansa, or Global Eagle Entertainment’s Airtime software solution to stream to passengers’ devices.

These are, unfortunately, difficult to assess without being able to see or interact with the systems concerned. 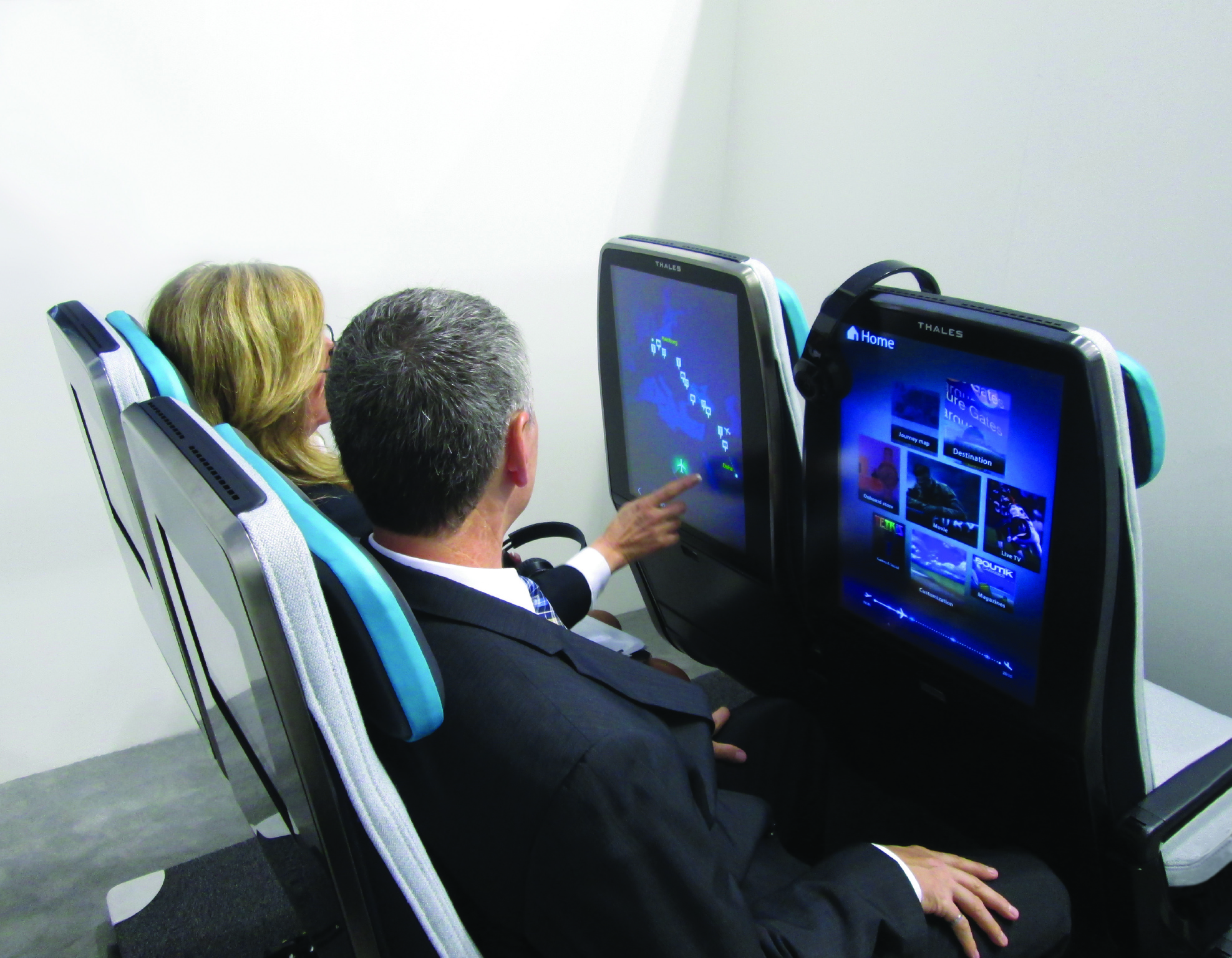 Or it’s a content innovation, like Turkish Airlines’ Invest Onboard system, a way to show IFE content that we haven’t seen before. Perhaps an airline will combine that idea with something like El Al’s startup incubator, which won an APEX Award last September. 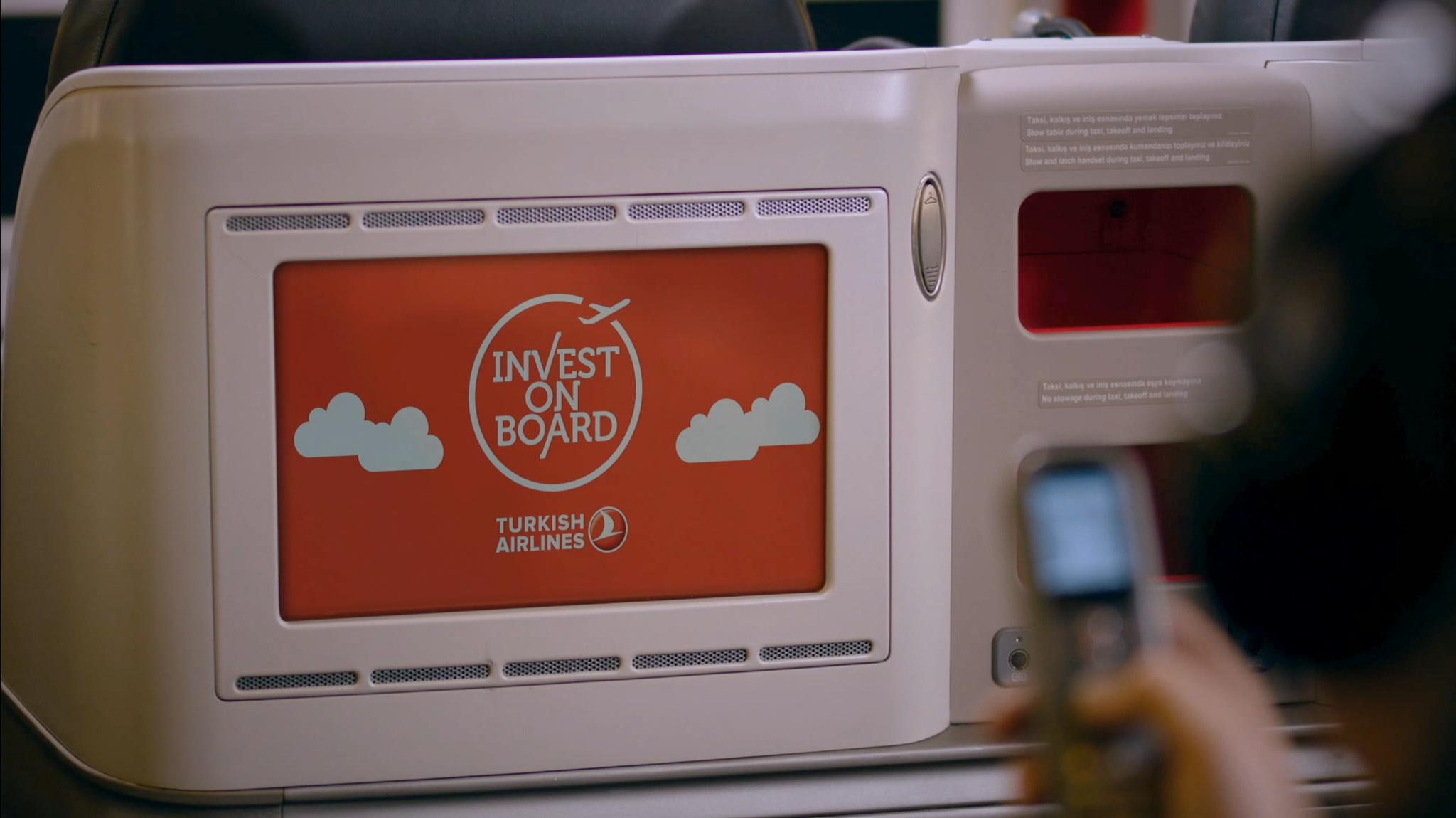 Sometimes it’s entirely new cabin concepts, like Formation Design Group’s interesting Lie-Flat Cabin Concept, a tricky one to get your head around, but interesting — think the “throne” formed by JetBlue’s Mint and similar seats, but in groups of five seats. It’s a smart way to solve a lot of the outstanding issues with staggered seats like Thompson Vantage.

Less new is the elegant PriestmanGoode-designed new Swiss first class, since there is nothing particularly revolutionary about this quite elegant evolution of Swiss’ design language and cabins.

Tangerine’s design of the Virgin Australia B/E Super Diamond outward-facing herringbone seat is also in the competition, despite the significant delays to production by B/E Aerospace as the result of head impact lethality safety concerns from regulators.

Many of these cabin concepts may never come to pass, however, like the 2-2-2 layout and three-door access of the Newface widebody, a concept boxwinged aircraft from a group of Portuguese designers that includes Embraer Composites Portugal. Embraer won an award last year for the cabin it later had to redesign extensively for practicality and head impact safety reasons, as RGN exclusively revealed at the Paris Air Show.

Seymourpowell’s concept of double-bed first class cabins (think the seat in the Etihad Residence, but reclining into a bed) is attractive, but loses four seats from a twelve-seat cabin to create nothing more than a hallway. It’s also unlikely that most airlines would want to bet on half of their first class passengers travelling as a couple. 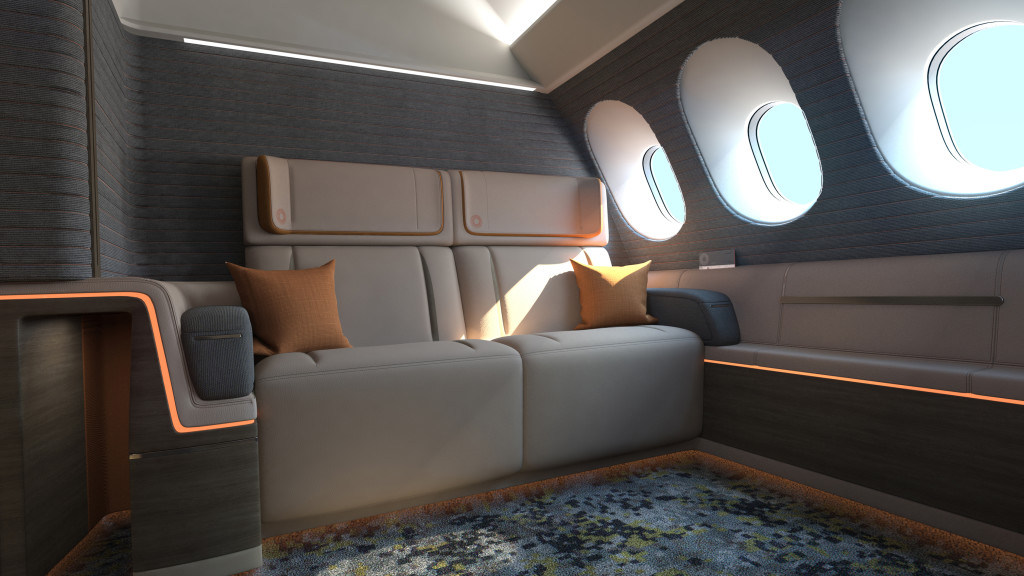 Teague, B/E Aerospace and Panasonic’s Waterfront, a business class seat that is essentially customized Super Diamond with cellphone-based personalisation options that many of today’s mobiles don’t yet support, and Yasava’s Aiana Wave, which the company calls Executive First Class for corporate jets, but which doesn’t even recline, could also arguably be viewed as vaporware in the near term (a prototype of Waterfront was showcased at International CES, but the seat isn’t available until 2019). However, we may well see some of the technologies conceived for these ideas filter into the real world. 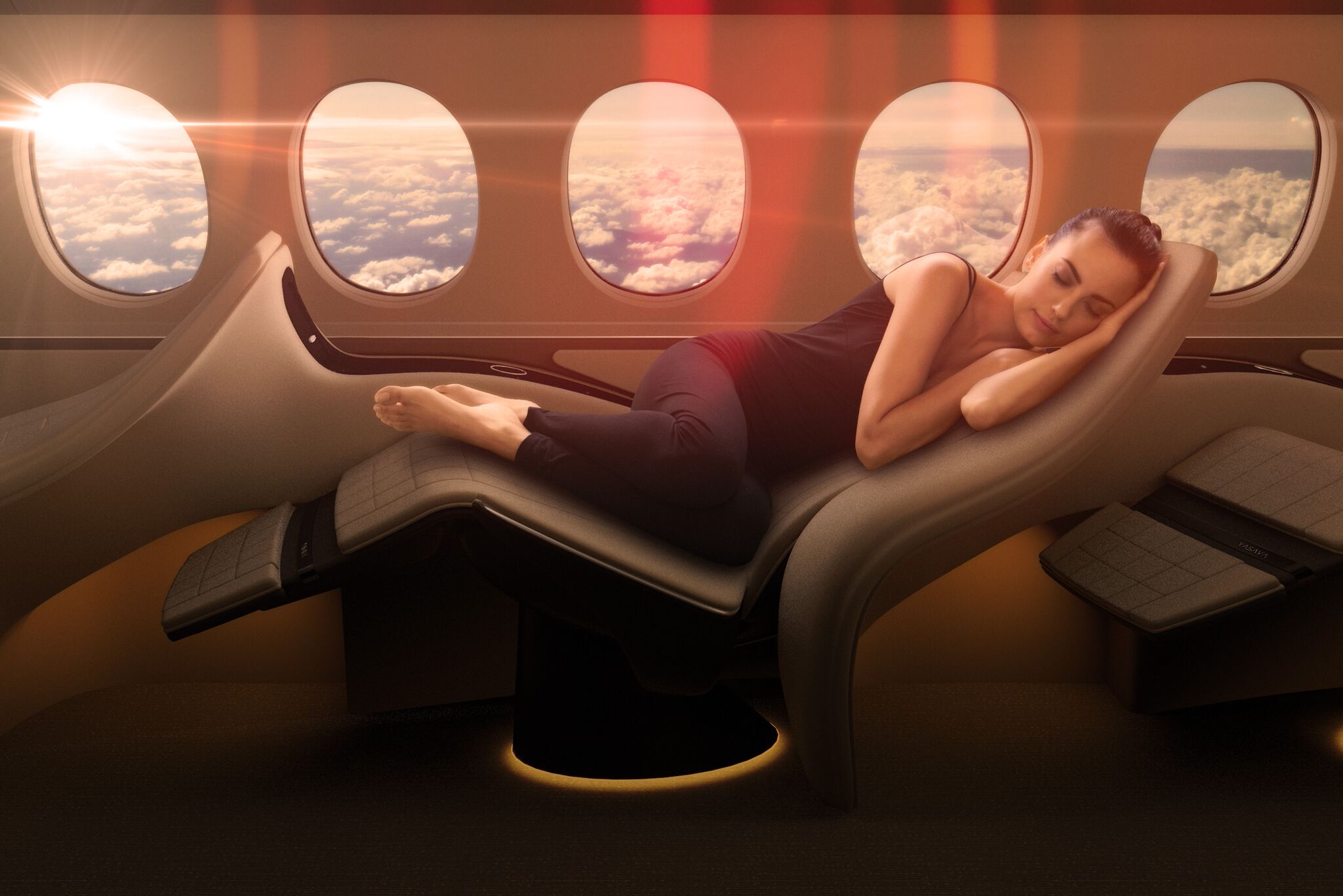 Yasava Wave in side sleep position

Also more pie-in-the-sky versus today’s real world: Zodiac’s Lifestyle cabin concept, which tries “to think out of the box and develop a visionary cabin architecture that revolves around a new and more natural passenger experience” to walk around and have leisure space but doesn’t acknowledge that practically none of that is monetisable and many airlines aren’t big fans of passengers congregating in one place anyway. (Unless they’re in business or first class and at a bar, of course.) 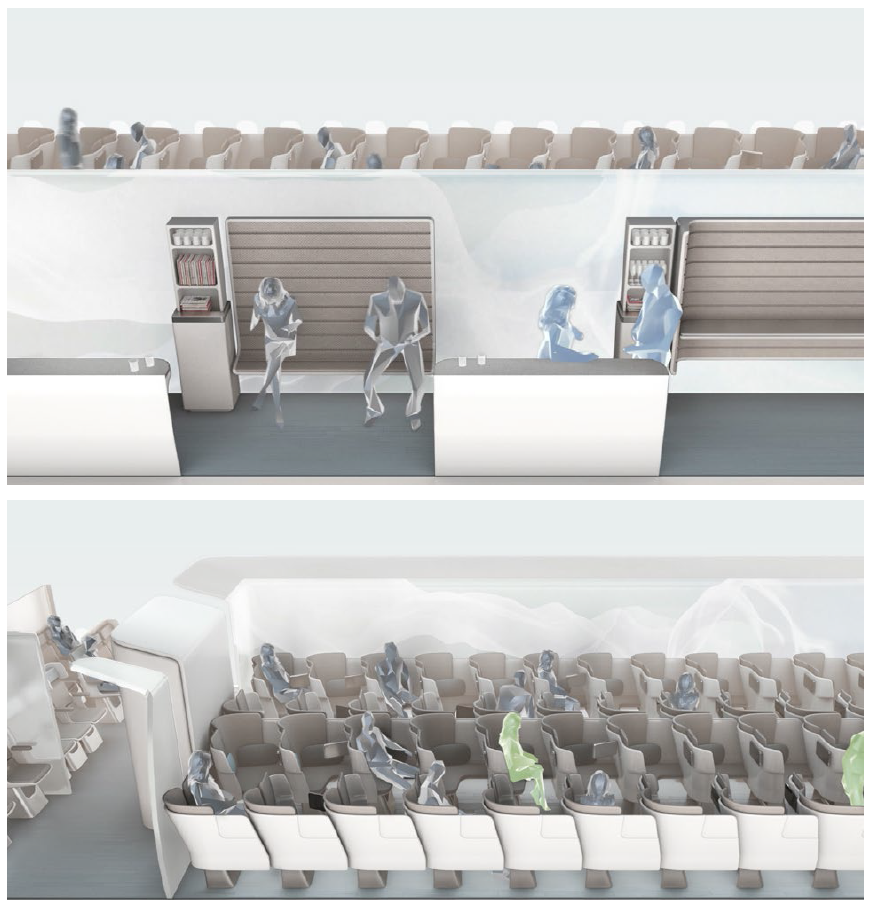 SII Deutschland suggests a centre section of four 17-18” seats be cut down to three 20” seats plus a storage compartment, notionally for senior citizens. It is unlikely that this is ever going to happen in an environment where more seats are being squeezed into aircraft, not less.

Turkish Airlines also has an interesting concept (submitted by its cabin interior chief engineer, Ayşegül Durak) for a flip-down pivoting U-shaped headrest cushion that skates along the line of whether an innovation adds too many moving parts or too much additional complexity to a seat. 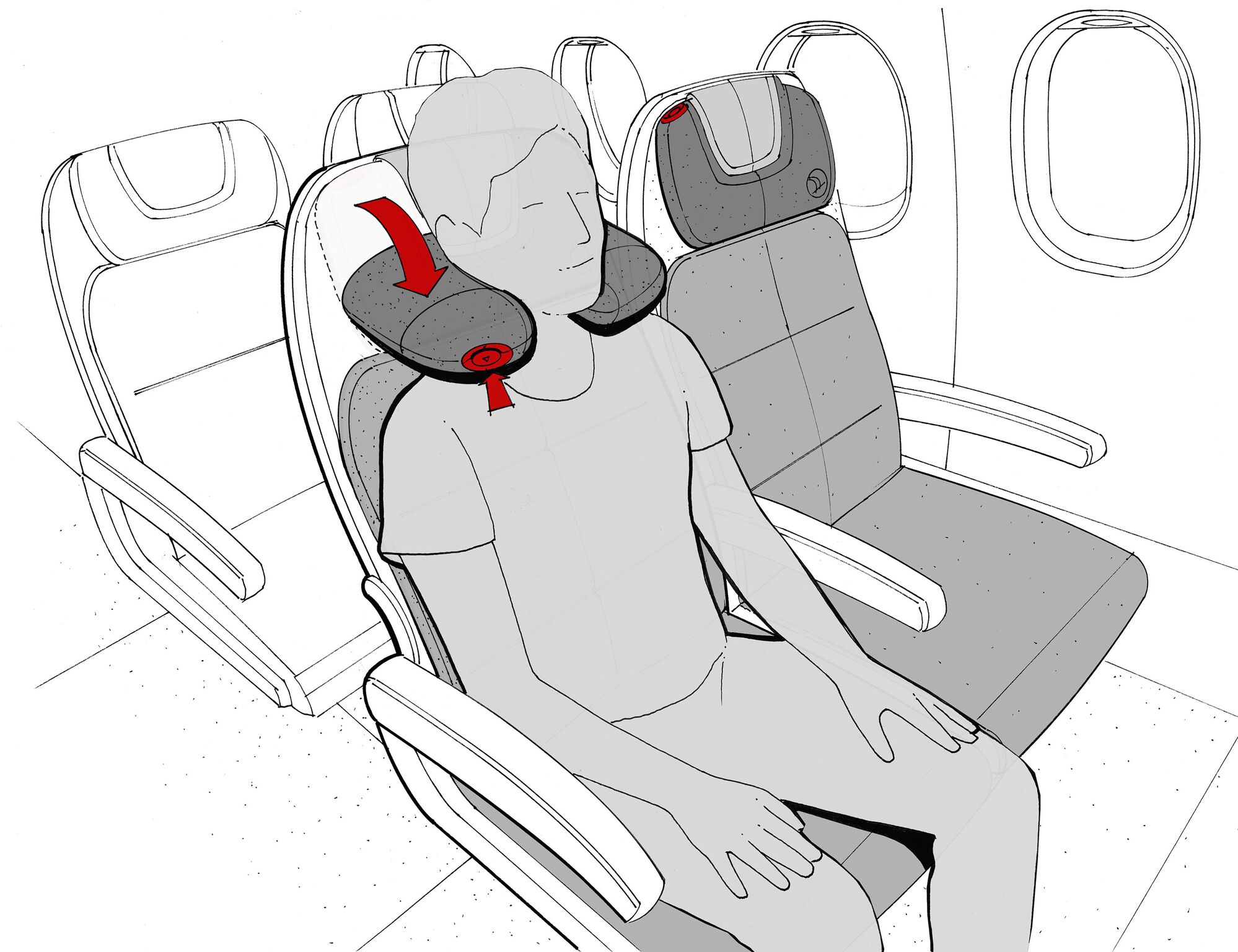 Armrests that we may never actually see on aircraft are the latest battleground, with the the ComFly MARE armrest, which extends and retracts to allow for a longer armrest or easier access to the aisle, but which is adding a movable part where none is required, and the Soarigami divider, which will either disappear or become the next KneeDefender. 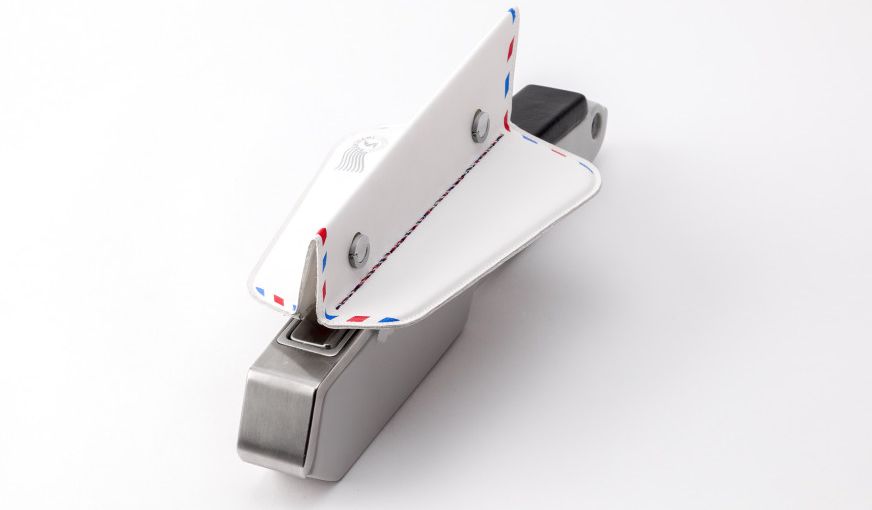 The Wishbone armrest. Solving that problem of “whoa, this economy seat is just too damn wide”. #paxex pic.twitter.com/7qoIM2cvmF

Much more likely: the Reliant-Lite Thermoplastic Carbon Composite Armrest Assembly, which is basically an armrest made of plastic that doesn’t require aluminium internals, saving weight.

Of the university entries, as usual, the focus was on relatively blue sky thinking that doesn’t match with aviation reality. This is not quite so frustrating as when it comes from existing design houses and component makers, as it’s a great opportunity for the Hamburg Aviation Cluster to encourage young designers to look at the cabin. It would be good to see greater industry involvement in the future to create more realistic proposals.

A notable exception, however, is the fascinating MultiSEP sliding bar concept from the Hamburg University of Applied Sciences, where the structure of the bar retracts during boarding, critical flight and leaving the aircraft to enable extra space, but slides out a metre to create surfaces into what is often unused space during cruise. Convertible common areas were a theme among the students this year, with TU Delft also presenting a (less impressive) entryway concept. 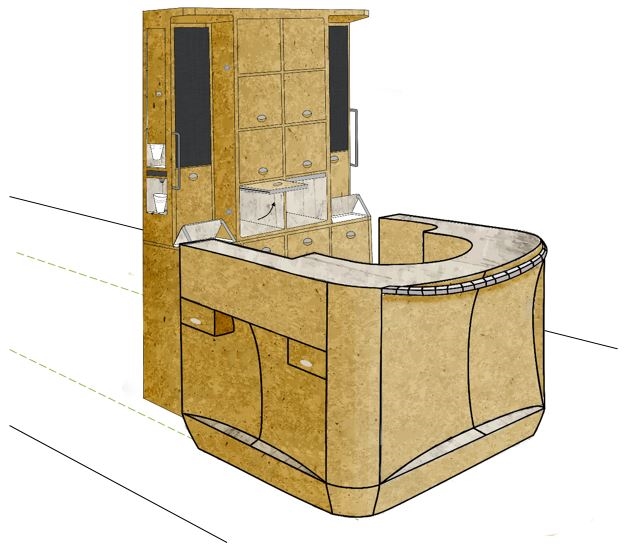 Safety innovations feature in the shortlist

New superstrong glass from AviationGlass is “based on a flexible polymeric sheet sandwiched between two ultra-thin glass sheets that undergo a special treatment during the various stages of the production process. The molecular structure of the glass is thus changed to make it stronger which results in clear or mirrored glass of a thickness of 1,7 mm. The glass is flexible, it is shock-absorbing and and the surfaces will never show any scratches.”

The Innovint PED Containment Bag is also a smart idea for a storage-minimal solution to contain a burning PED. The bags come in three sizes, but it’s hard to understand the logic of trying to slide a smoking (and potentially burning) iPad into the iPad-sized bag — surely it’s better to save those precious seconds of fiddling with corners and just use the big one? 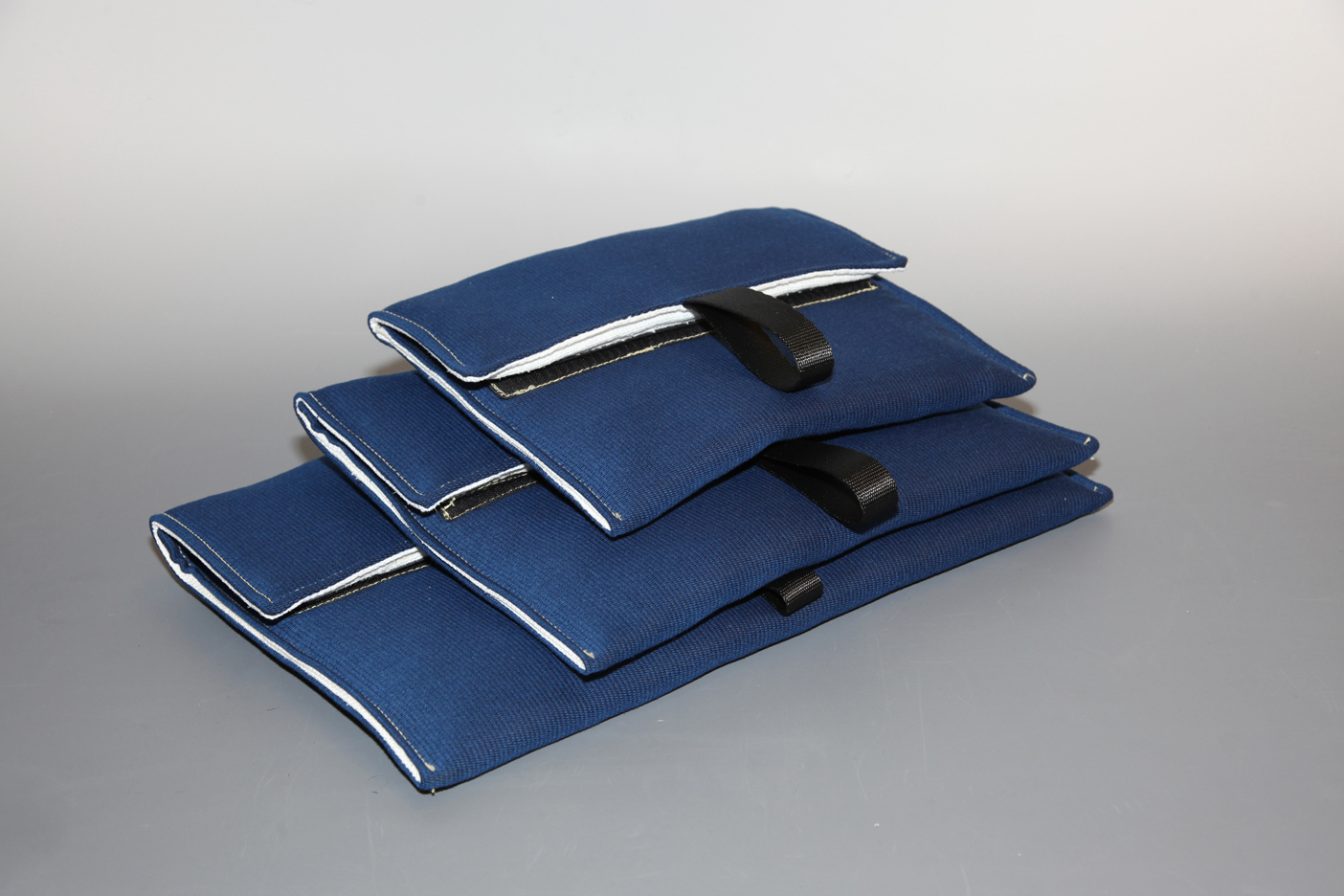 It seems logical to give top marks to the Lufthansa Technik Inductive Cooking platform, which leverages the reduced-heat (and reduced flammability) home cooking technology for an airline galley application with an integrated fume hood that also enables safe direct-heat cooking. This is smart innovation. 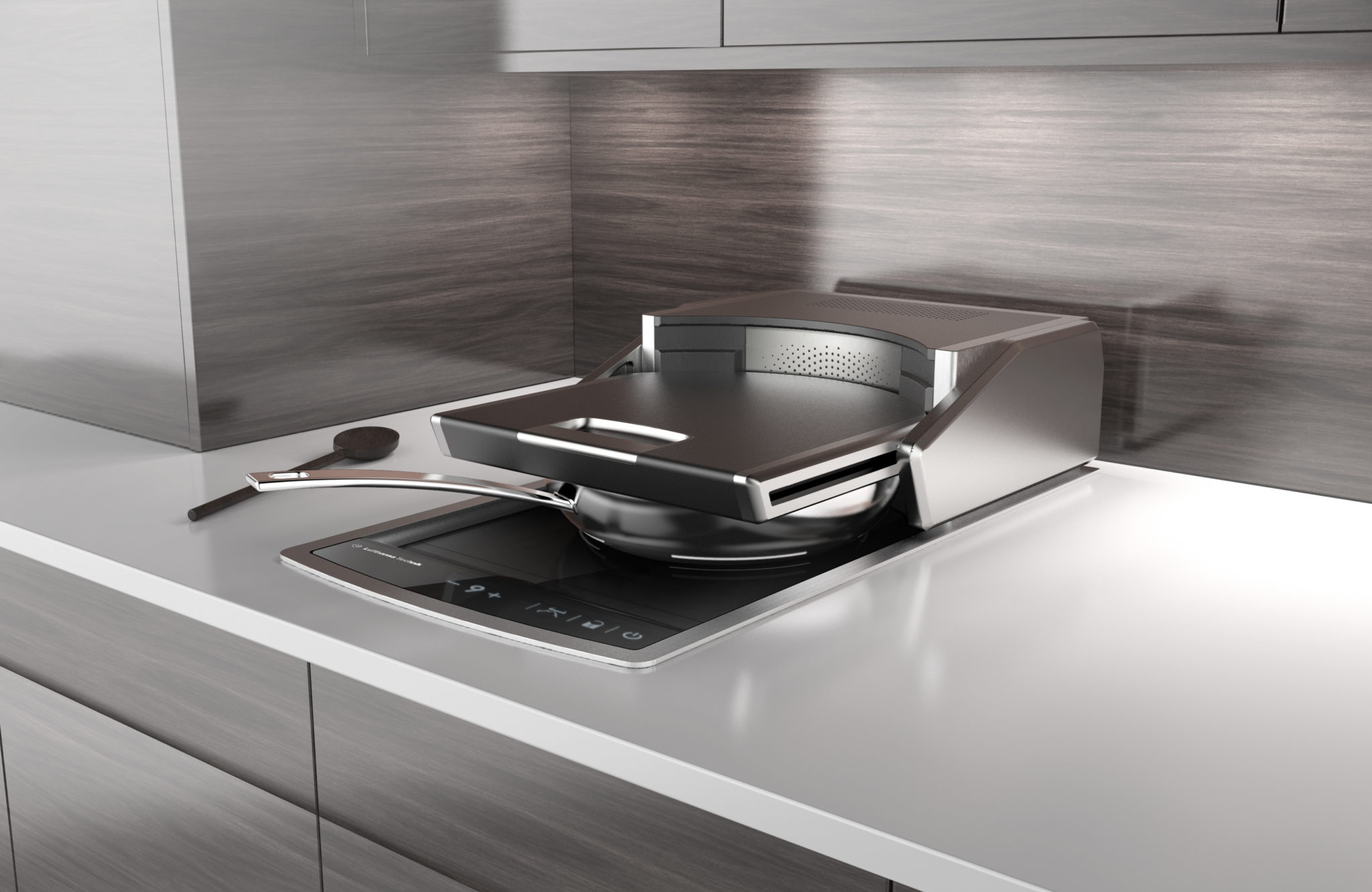 And in wider safety and health innovation, Boeing is presenting its Fresh Lavatory concept, which uses resistant surfaces and UV sanitisation to clean those increasingly smaller lavatories.

Among the entries we’ve seen before are Gogo’s 2Ku and Astronics’ AeroSat low-drag, lightweight Ku-band radome, as well as the Sekisui Infused Imaging technology for cabin surfaces. 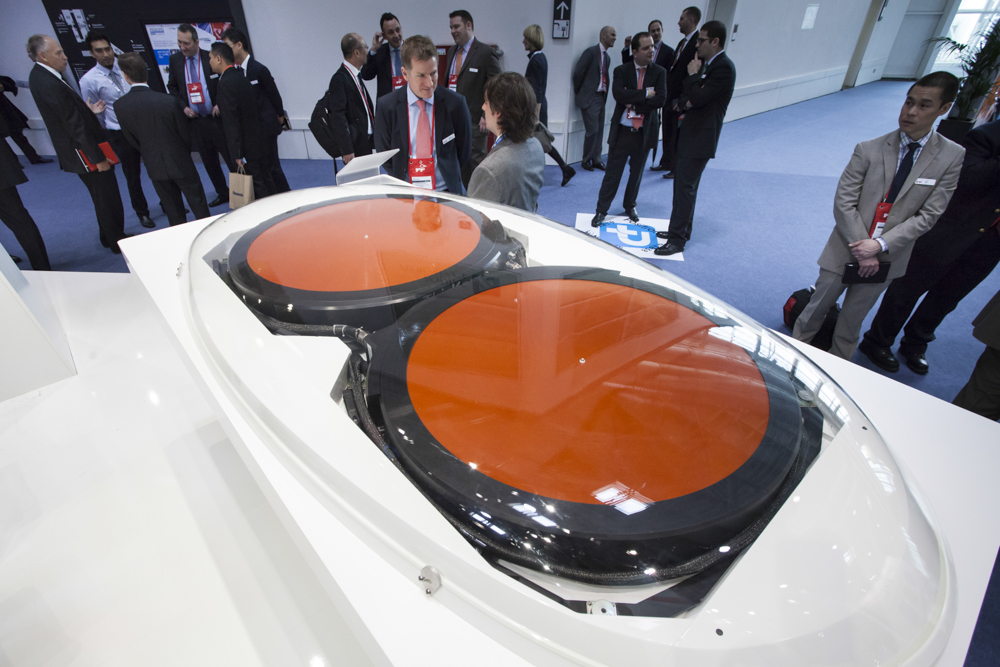 Lufthansa Technik’s Qantas iPad solution — which RGN revealed last summer — is among the entrants, while on the other end of the high-tech-low-tech spectrum, the Kanar PED Pouch is also making an appearance. 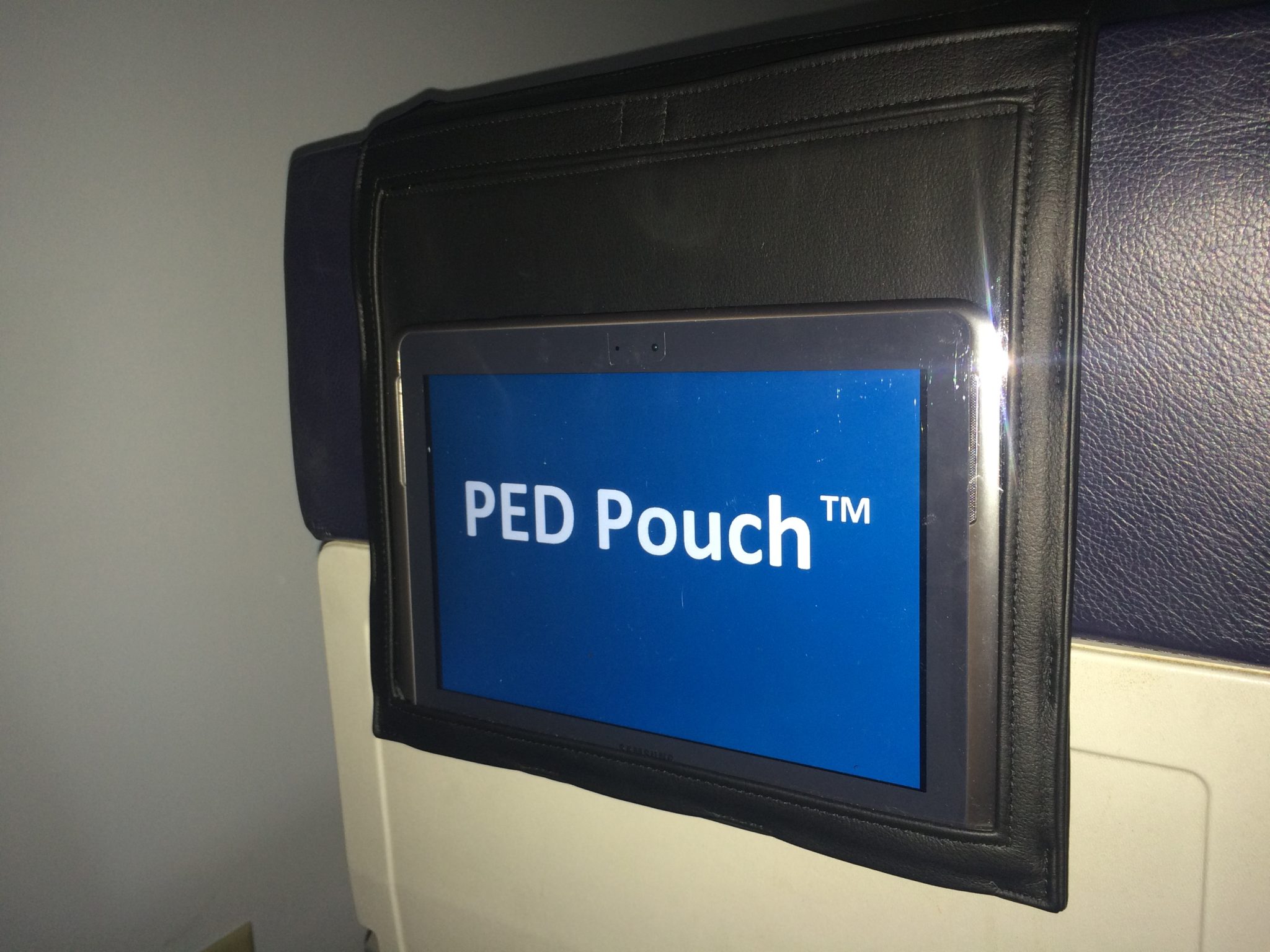 The Etihad tapered 787 first class seat (which debuted in September 2014, so it’s not entirely clear why it’s being entered for the 2016 awards) is also on the list. 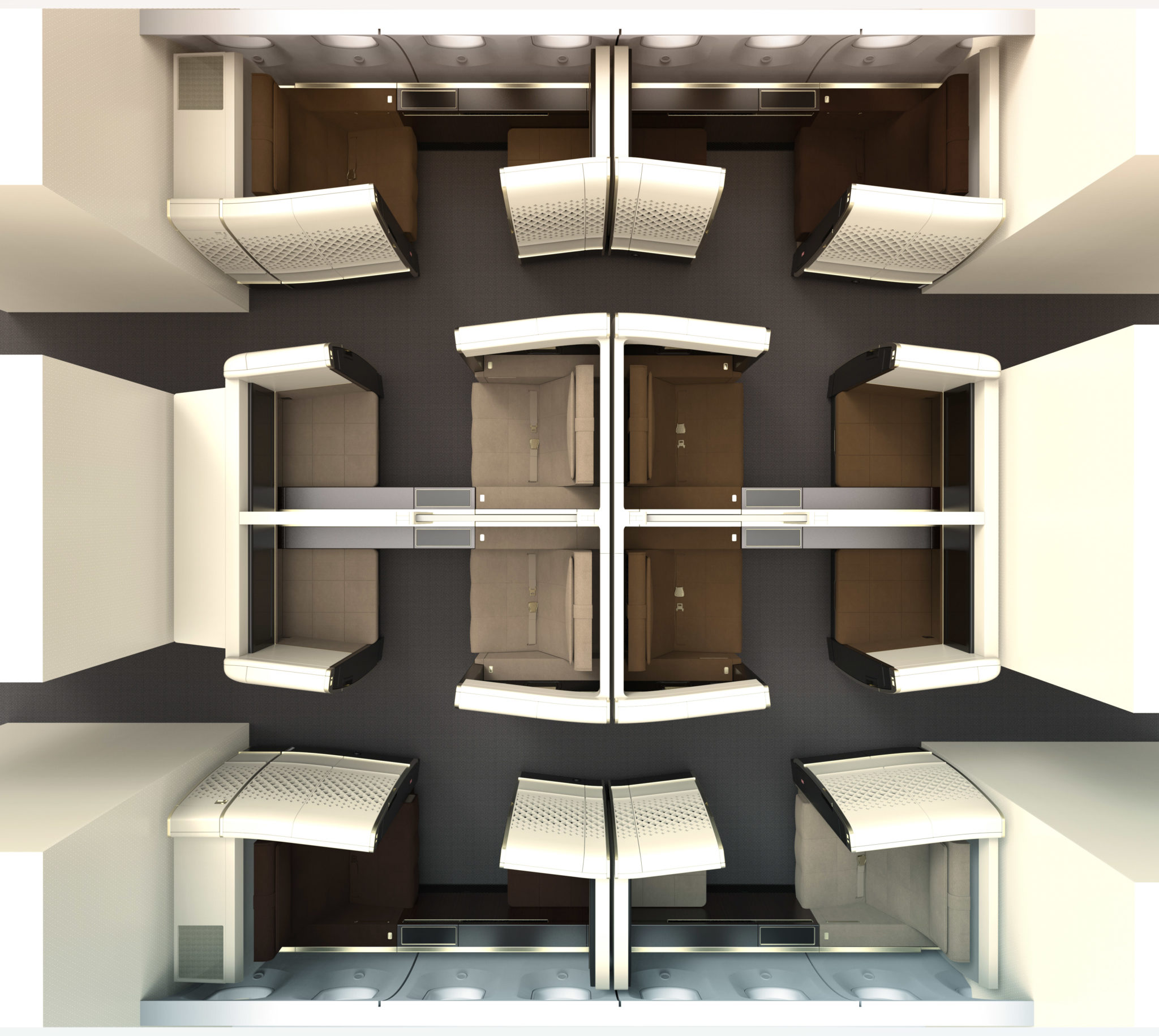 Teague, meanwhile doesn’t seem to have answered any of the obvious “why is this not just terrible for passengers” questions about its Poppi concept airline of the future since debuting it last year at APEX.

Zodiac Inflight Innovations (the Rave entertainment side of the business) has a non-retracting, low-profile wireless screen for overhead use, which it notes can be used for second or even third screen functionality.

Lufthansa Systems’ shrunk-down BoardConnect Portable streaming system is also of note, particularly given its 1kg weight and set-it-and-forget-it content updates over a mobile data link as well as USB. 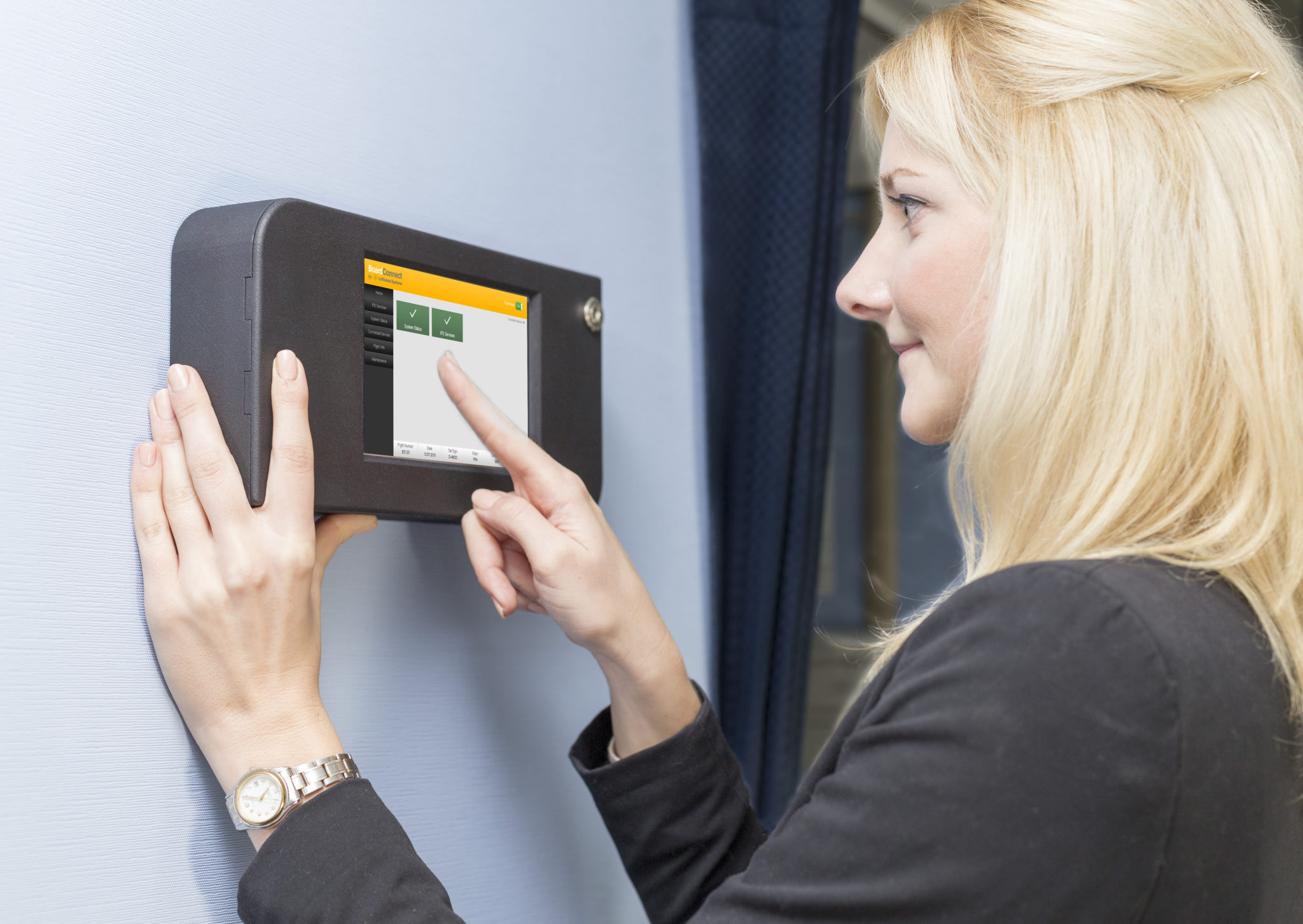 Elsewhere in the cabin, you’ll find a new lightweight baby bassinet from Aircraft Cabin Products, 1.5kg lighter than previous models, and the Flightweight trolley, knocking 5kg or 33 percent off the weight of previous models with a structure combining recycled materials and basalt.

The inch-thick Bionic Partition from Autodesk’s The Living design studio and Airbus’ AP Works knocks 45 percent (15kg) off the weight of the rear door partition wall on an Airbus A320. 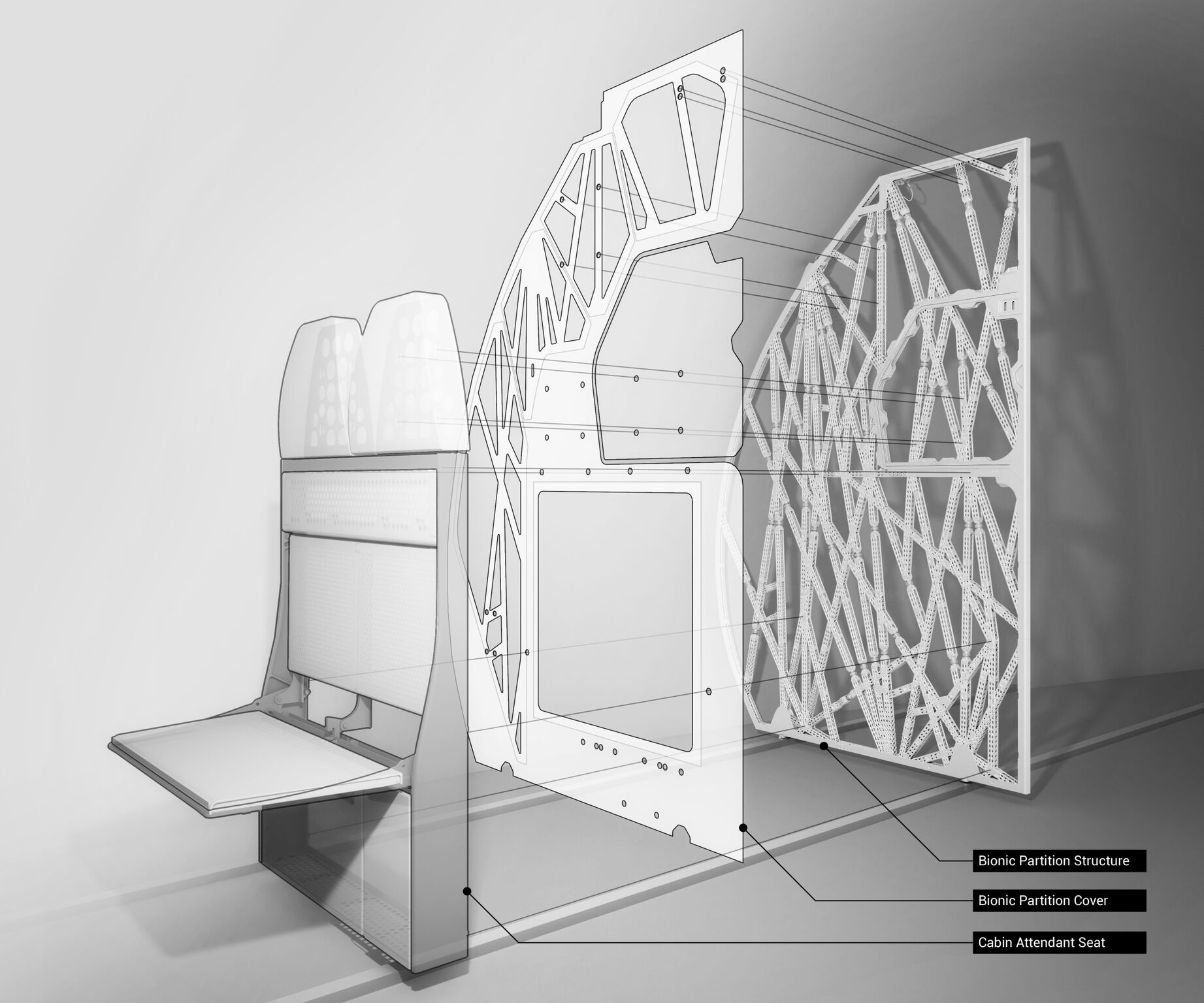 And the Zodiac DMS Bifold door cuts 25 percent weight and 75 percent of the number of parts from the traditional lavatory door, as well as providing a rather more obvious place to push and pull — something that I still notice passengers not immediately getting right today.

Diehl Aerosystems is also showing its DIANA concept cabin, which is very attractive — except one can’t help but note that the geometrical shapes are very reminiscent of the design language used by Etihad’s Facets of Abu Dhabi branding.

I like the Diehl DIANA concept cabin, but nobody but Etihad wants their cabin to look like Etihad. #PaxEx pic.twitter.com/sCmepcn8Da

Diehl’s Dandelion projection and lighting system, however, is a great implementation of a really fascinating concept that has a wide variety of use cases, from speeding up boarding to ancillary advertising to cabin wayfinding during the night. B/E Aerospace’s Viu lighting system is also impressive. 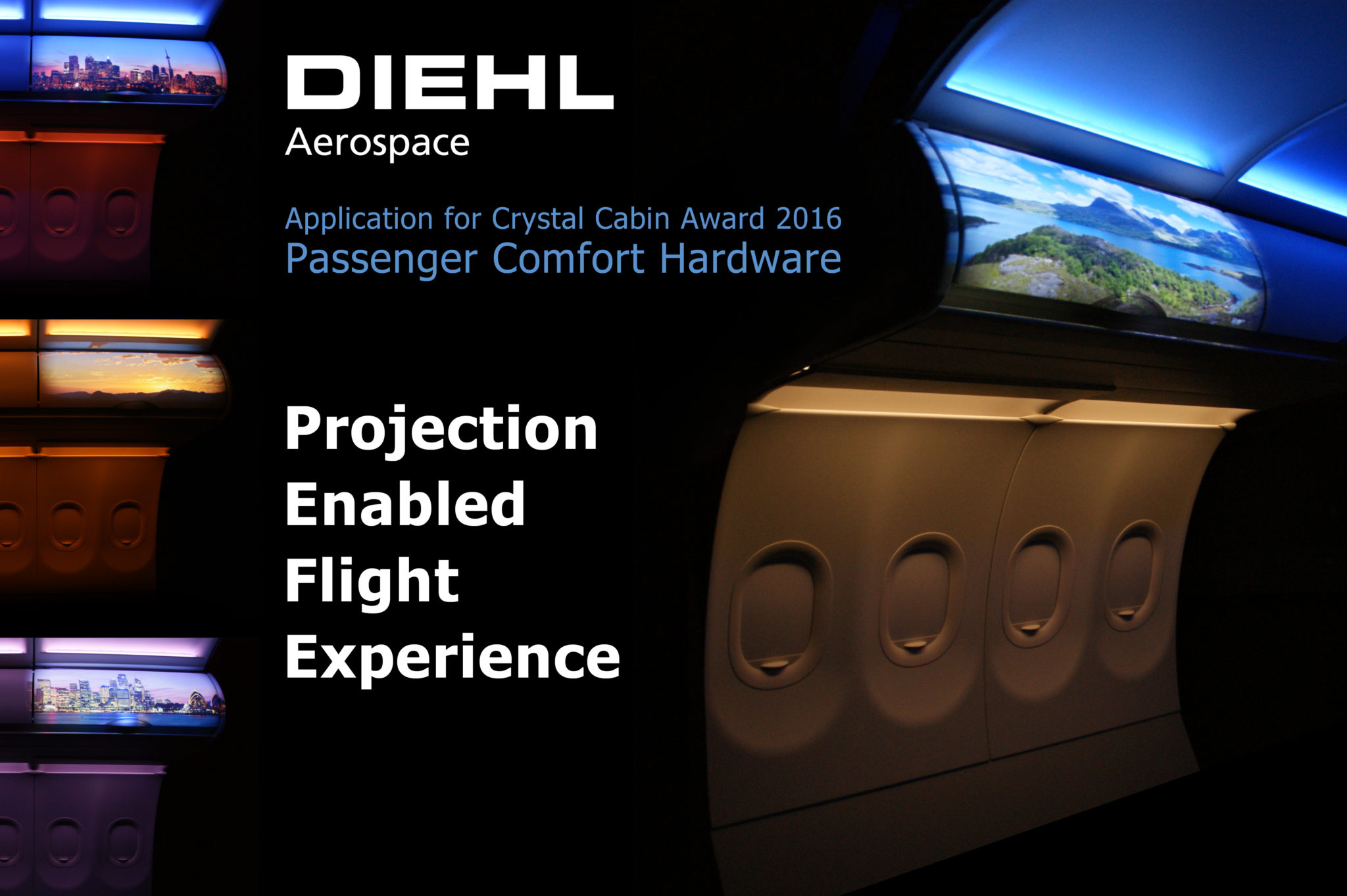 From the small details to the big picture, it will be fascinating to see whether the Crystal Cabin Awards panel focuses on real innovations that we will actually see or are already experiencing — or whether they will be sucked in by never-going-to-happen vaporware.