Lufthansa and Frankfurt Airport are aiming to improve the operations, sustainability and other aspects of the passenger experience at the German airline’s primary hub with a new partnership, FraAlliance. The 50/50 joint venture, which sounds promisingly like the one Lufthansa operates with the airport operator at its substantially superior Munich Airport hub, is focussing strongly on passenger experience.

“The two companies intend to use FraAlliance to strengthen their existing cooperation on strategic and operational matters at Frankfurt Airport and thus, plan to deepen their long-standing partnership in relation to enhancing services at Frankfurt Airport’s Terminal 1,” they note.

“The aim is to improve the quality of products and services at Frankfurt Airport,” continue the pair, and certainly not before time.

An early win cited by the joint venture is displaying security checkpoint wait times in the Lufthansa app. They also say that they have “analysed and optimised” passenger flows, which they promise “will significantly reduce transfer times for around a million passengers per year by removing unnecessary, duplicate security checks”.

Passenger experience improvements will be very welcome to travellers. Frankfurt — and, concomitantly, Lufthansa’s primary hub operation — is perennially at or near the bottom of most passengers’ European connection preference lists. Given that Star Alliance passengers have several excellent hub options, including Munich, Zurich and Vienna, it is indeed time that Frankfurt upped its game.

Fundamentally, the problem is that the layout of Lufthansa’s terminal (then called Mitte, or middle, now numbered 1) dates back fifty years to 1972, with various extensions added on in the decades since without also adding on the infrastructure to move efficiently between them.

Today, the principal passenger experience problems with Frankfurt are operational, with a smaller aesthetic problem contributing as well. 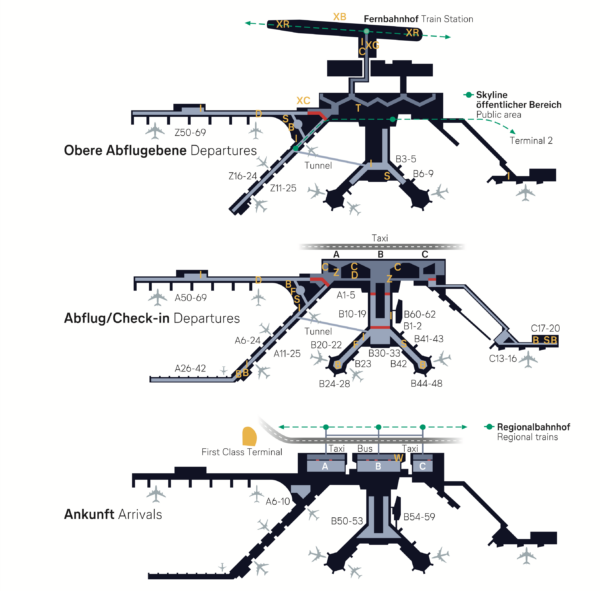 The layout of the Lufthansa precinct at FRA is complicated and unhelpful to passengers. Image: Lufthansa

Operationally, the layout of the terminal space Lufthansa uses is antiquated and sub-optimal, split into four spoked areas under the same roof but with little to no effective transportation between them. From west to east, these are:

For most transfers, getting back from one spoke to the main terminal and then on to the connecting one can be a substantial hike, a matter of multiple kilometres. It is underprovisioned with moving walkway travelators, let alone any sort of tram or underground shuttle. The Sky Line peoplemover is impractical for Lufthansa/Star Alliance connections in most instances, and in any case for these areas of the airport only connects two points at roughly A17 to an area in the B section far from the gates.

The sole underground tunnel, a dark affair with poor accessibility, links only the A and B sections from approximately A15 to B19. Passenger movement between the sections of the terminal will no doubt be a priority for the new joint venture.

Given that the partnership cites intermodality, we would expect substantial improvements to Lufthansa’s increasingly important Express Rail connections to the long-distance high-speed rail network at the airport’s station. This still feels rather an afterthought, tucked into the small connecting corridor to the station and its The Squaire retail and hotel complex, so an improved experience, perhaps with airport terminal colocation, or even as a separate terminal in The Squaire, would be welcome.

Improvements to the reliability of baggage transfer through the airport, too, will be necessary. So will boosts to lounge capacity, which is tight throughout the facility but particularly in the B-gates piers.

Lastly, aesthetics. Frankfurt’s airport is tired and monochrome, with far too much hard grey surfaces and harsh cold lighting. Making changes here is not operationally required — it won’t speed up travelling the kilometres between gates — but given the amount of time it takes, making it more pleasant would be a big win for #PaxEx.