Within the next three years, a fleet of nearly three dozen Austrian Railways (ÖBB) Nightjet sleeper trains will be whizzing their way through the European night at up to 230 km/h. The new trains from Siemens are truly next-generation, both in approach and in passenger experience.

Let’s start at the couchette end of the experience, the cheapest kind of bed you can get. Here, the next-gen Nightjet is skipping the cheapest option, the six-bed couchette (a staple of European budget rail for decades), and starting only at the four-bed couchette. 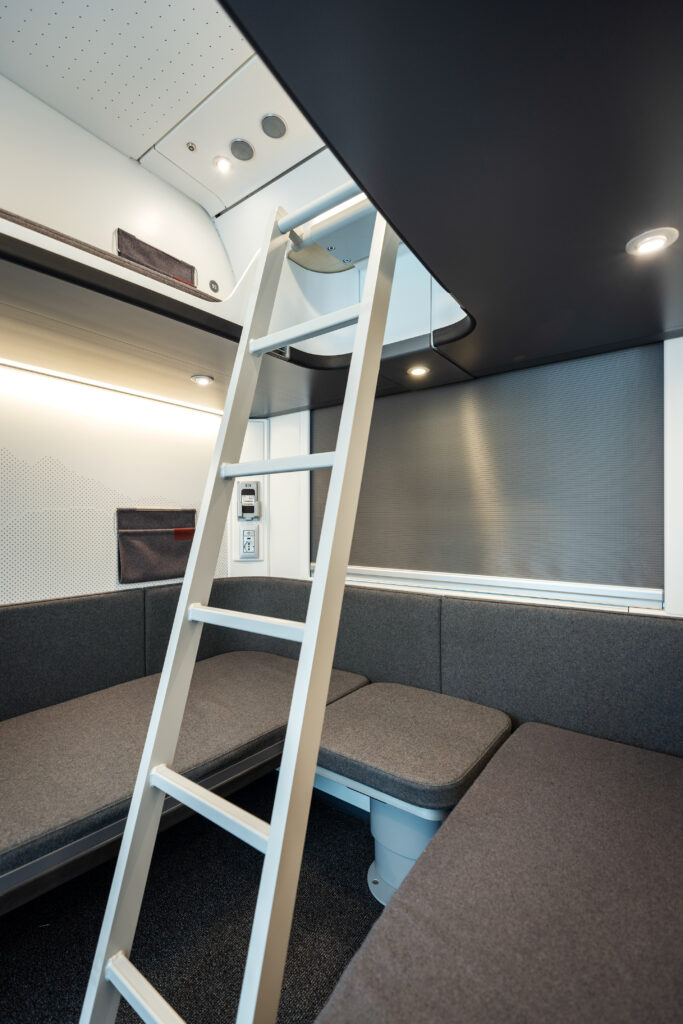 All the beds are four berth on the new trains. Image: Siemens OBB

This looks to be a substantial improvement over the existing product, which can feel very tired. Each compartment contains a clean modern set of two upper and two lower bunks are outfitted in a white and grey palette, with pillow, duvet, AC outlet, USB port and wireless charging. The bunks are arranged perpendicular to the train, and the upper bunks accessed via a ladder. 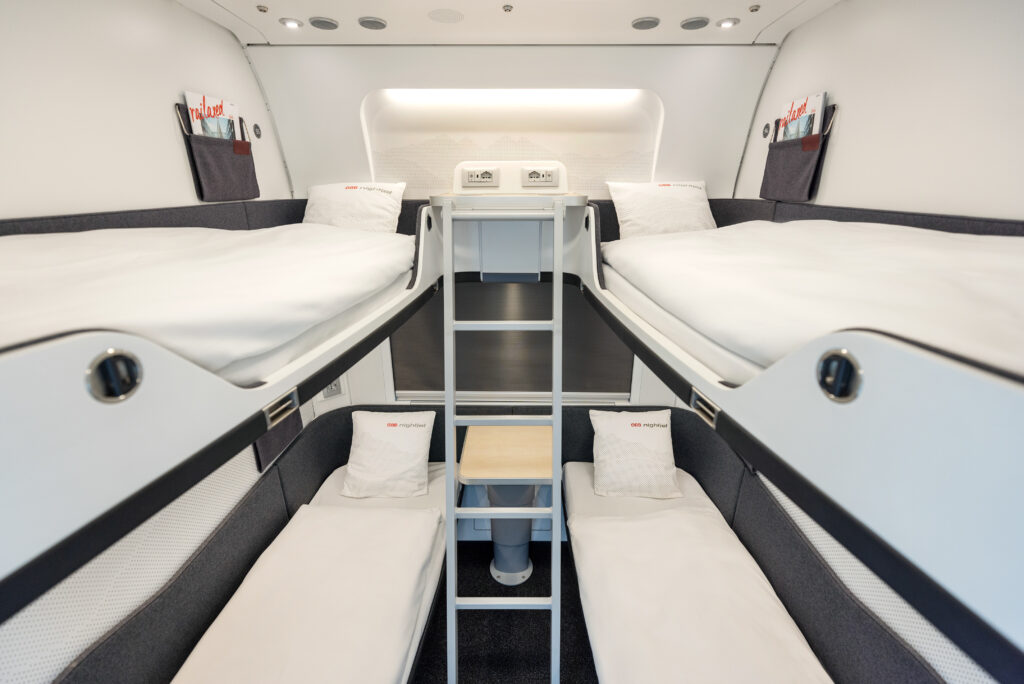 The couchettes are an upgrade both in look and space. Image: Siemens OBB

Next are the entirely new individual bunk pods, which are in essence a Japanese-style capsule hotel bunk laid out in the same style as a couchette, with the bunks again perpendicular to the train. These are a remarkable new addition to the passenger experience landscape.

And now for the greatest innovation on these new sleeper trains: The minisuites, individual privacy at couchette prices. pic.twitter.com/aMmGq1PUmo

Each pod is closed via a sliding door at foot level, and each has the opportunity to open up a door at head level to chat with one’s neighbour (if both passengers unlock their doors). Every pod has its own mini-window too. 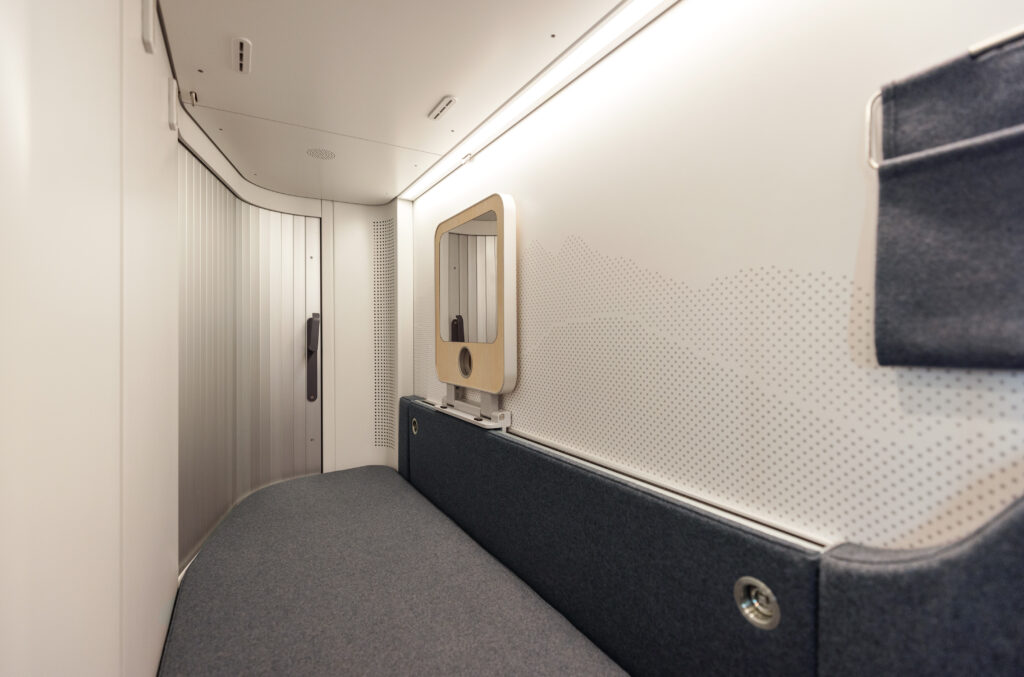 The pods have a very capsule hotel feel to them. Image: Siemens OBB

At the top of the range are the sleeping compartments, which are 1 and 2 bed sleepers, with one deluxe sleeper with more space. No longer do the beds fold down to hide the seating in these compartments: instead, the beds are fixed and a separate seat is provided. 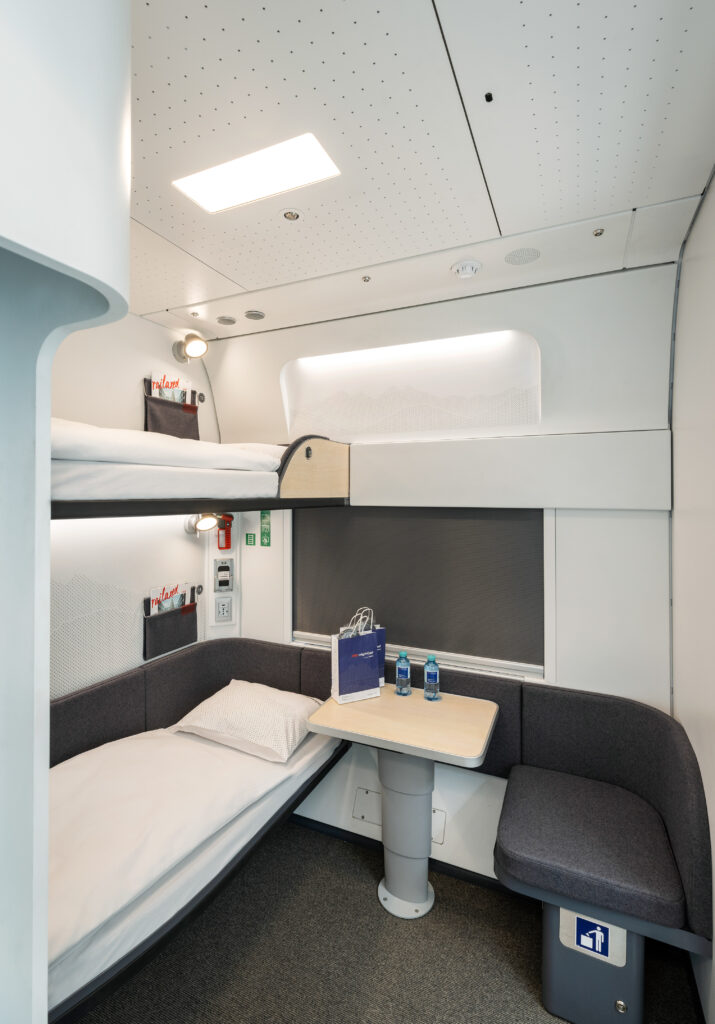 In the deluxe sleeper the beds are perpendicular to the train. Image: Siemens OBB

The beds are, unusually for a European sleeper, arranged parallel to the train, and overlap at about waist level with a bathroom unit. The compact bathroom is a tiny wetroom with a shower wand over the WC, and is functional if sterile.

Of note, all the sleepers come with their own bathroom and shower, so the old offering of economy sleepers with just a washbasin is no more.

The deluxe sleeper offers extra space, its bathroom is larger, and it features a separate small shower unit. 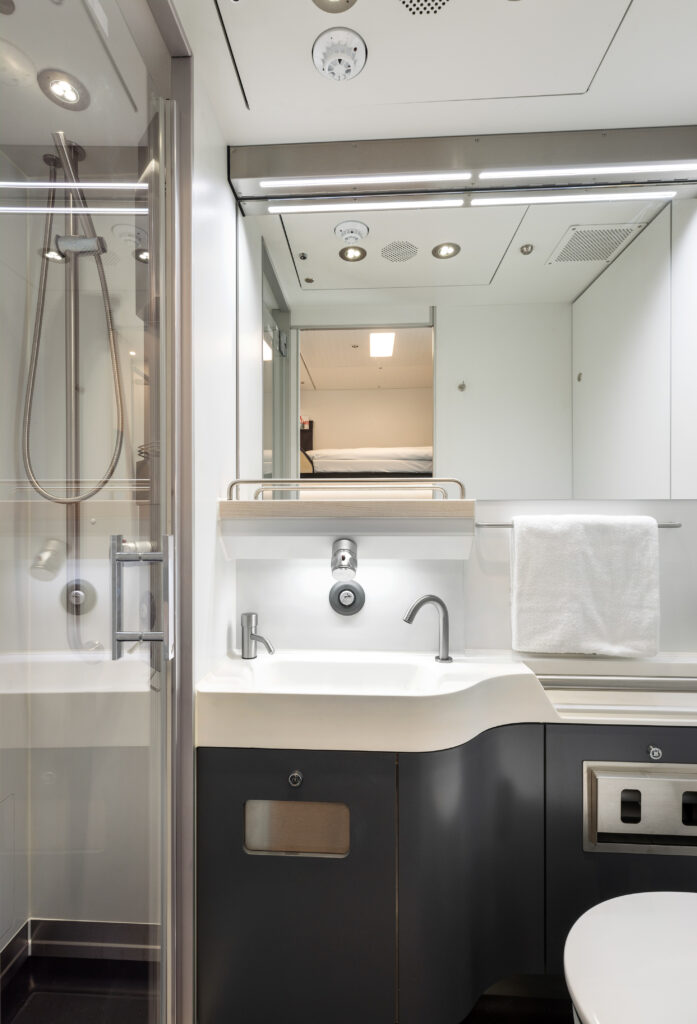 Opposite the bathroom is a single seat and a table that, with the addition of a lowering mechanism and cushion, becomes a second seat if the compartment is occupied by two.

Overall, the couchettes are an aesthetic improvement. The new pods are an entirely new concept that will hopefully attract more people onto night trains — particularly those for whom a budget couchette with three to five strangers does not appeal. The new sleeper cars are very functional and the new layout looks attractive and efficient.

But the older, cheaper sleeper options including the six-bunk couchette and economy sleeping compartment without ensuite bathroom are gone, which feels like a loss when considering the current cost of living crisis across the continent.

Nor does the train provide a full range of options for people whom a bunkbed-style sleeping arrangement does not suit, perhaps because climbing up to a top-level bunk is not an option. With an aging population, whose needs may be different to a young backpacker, this feels like a missed opportunity that some other recent sleepers, like the Caledonian Sleeper to and from Scotland with its double beds, have managed to seize.

“For barrier-free travel, each new Nightjet will have a modern accessible couchette compartment as well as a bathroom that can be accessed via low-floor entry,” says the ÖBB, but no details or images are provided.

The seven-car trains will carry 254 people — slightly more than a single high-density Airbus A321neo — and will consist of three couchette cars, two sleeping cars and two seating cars that are also the control and multifunction cars. They’re less dense than their predecessor, with the ÖBB saying that this means greater privacy for passengers.

The ÖBB has ordered a total of 33 of the next-gen Nightjets, which will arrive by 2025 after the first goes into service “by the end of summer 2023 on the popular routes from Austria and Germany to Italy”.