Analysing the passenger experience of a start-up airline — particularly one launched as quickly as ITA Airways, the successor to Italian national carrier Alitalia — is always interesting, so when the airline’s latest A350 turned up outside the Airbus chalet at the Farnborough International Airshow, Runway Girl Network leapt at the chance to get on board.

Up front ahead of doors two is a full cabin of the Collins Aerospace Super Diamond seats which were introduced to the A350 by Qatar Airways in the middle of the last decade. They’re still a solid product on the airframe: by no means a high-density seat, but lacking some of the bells, whistles, and suite doors seen in other products.

Your author understands that this aircraft was one of the numerous widebodies that was supposed to go to one of the HNA Group airlines, and that ITA didn’t have the opportunity to change anything beyond the very lightest set of seat dressings in terms of colour, materials and finish (CMF). 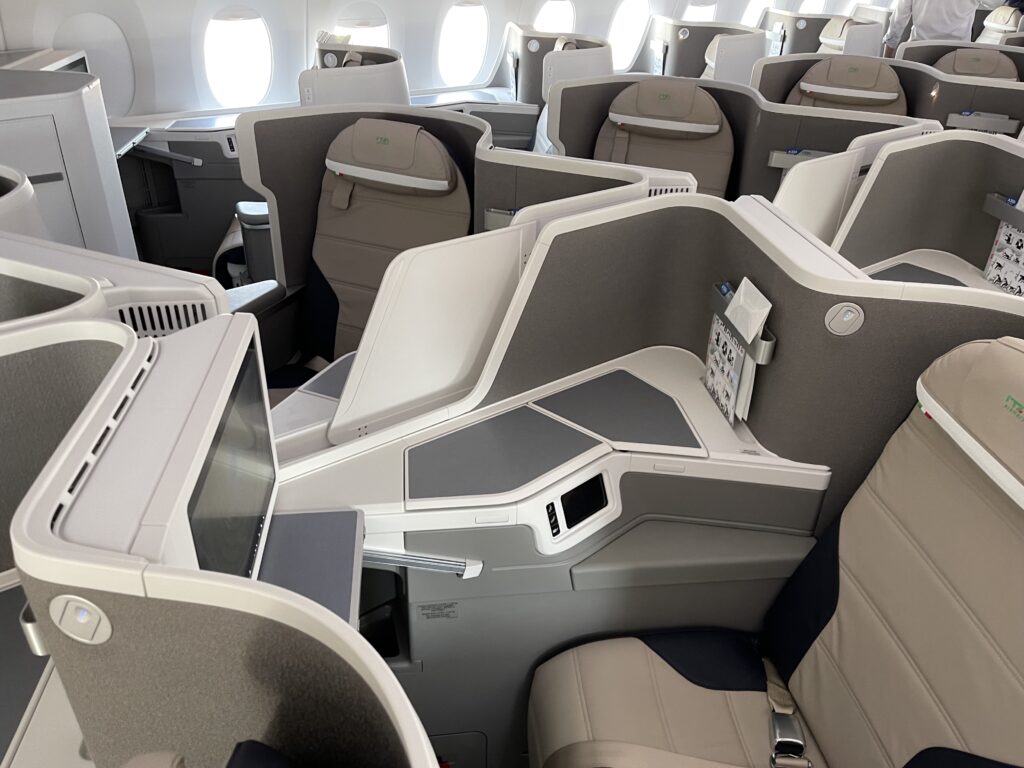 From the front, the view is a lot of greys and tans. Image: John Walton

At this point in the evolution of longhaul business class, Super Diamond is the kind of decent product that will serve many airlines well — a commoditised seat that can easily and effectively be swapped between carriers without much fuss. 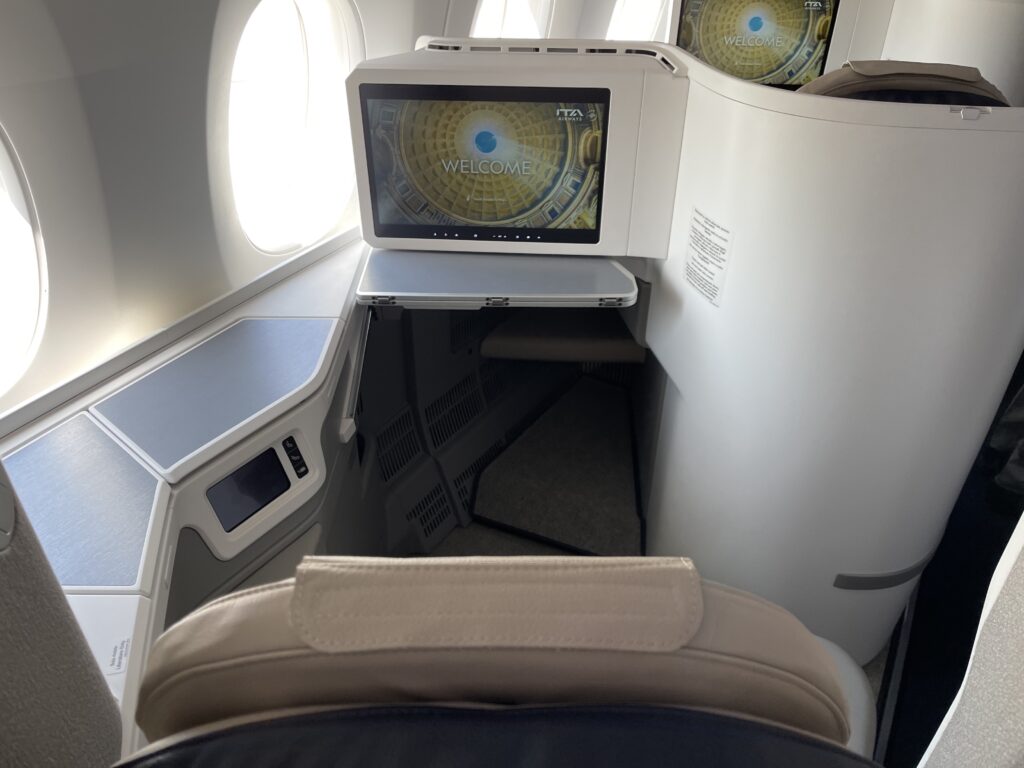 The product is a decent stock implementation of Super Diamond. Image: John Walton

It has the two irregular pentagonal side bins with power, an effective if somewhat inelegant sliding tray, a decently sized inflight entertainment monitor, and deals with the head injury criterion of certification via an over-shoulder belt. 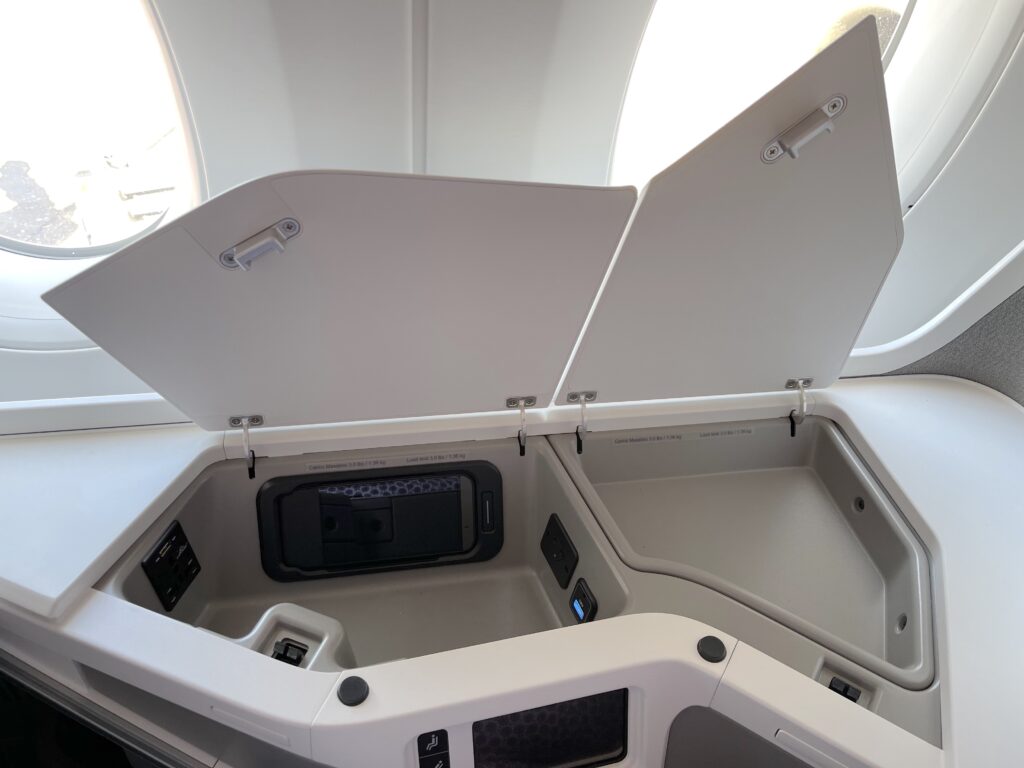 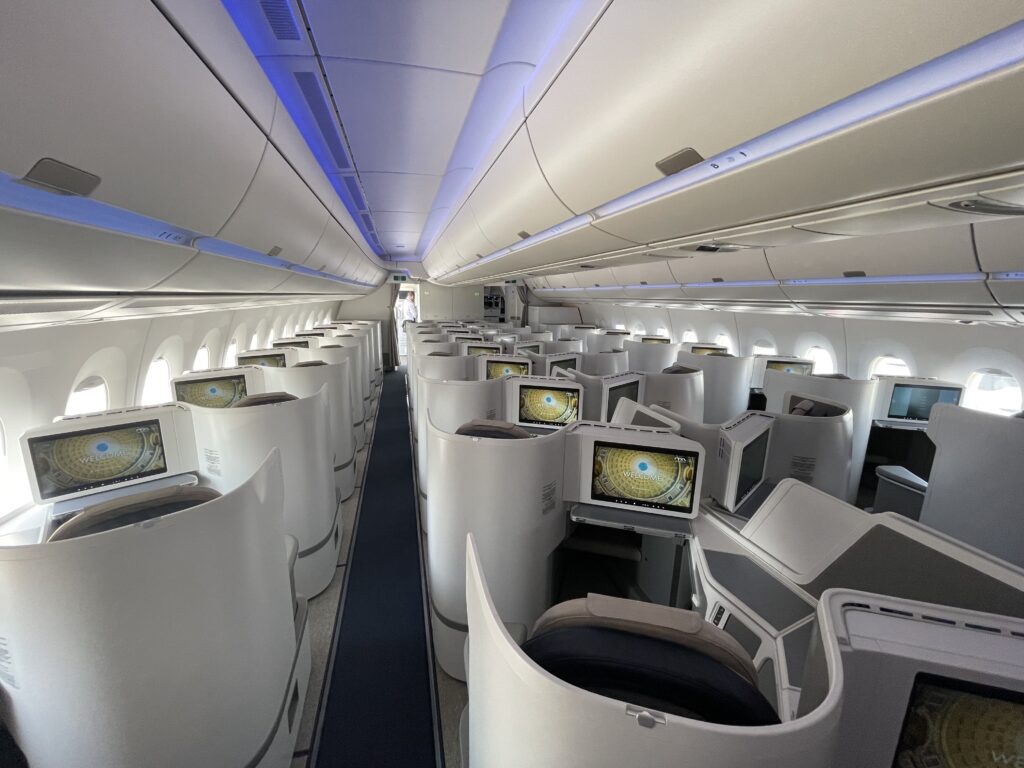 There is a lot of off-white thermoplastic in this cabin. Image: John Walton

When seated, the only thing you can see that isn’t off-white thermoplastic is the off-grey thermoplastic of the table and side bins.

Even the soft product was white-on-white, and with a very fussy, elderly sort of aesthetic that could almost come out the other side of cottagecore, if it weren’t just… well, white. 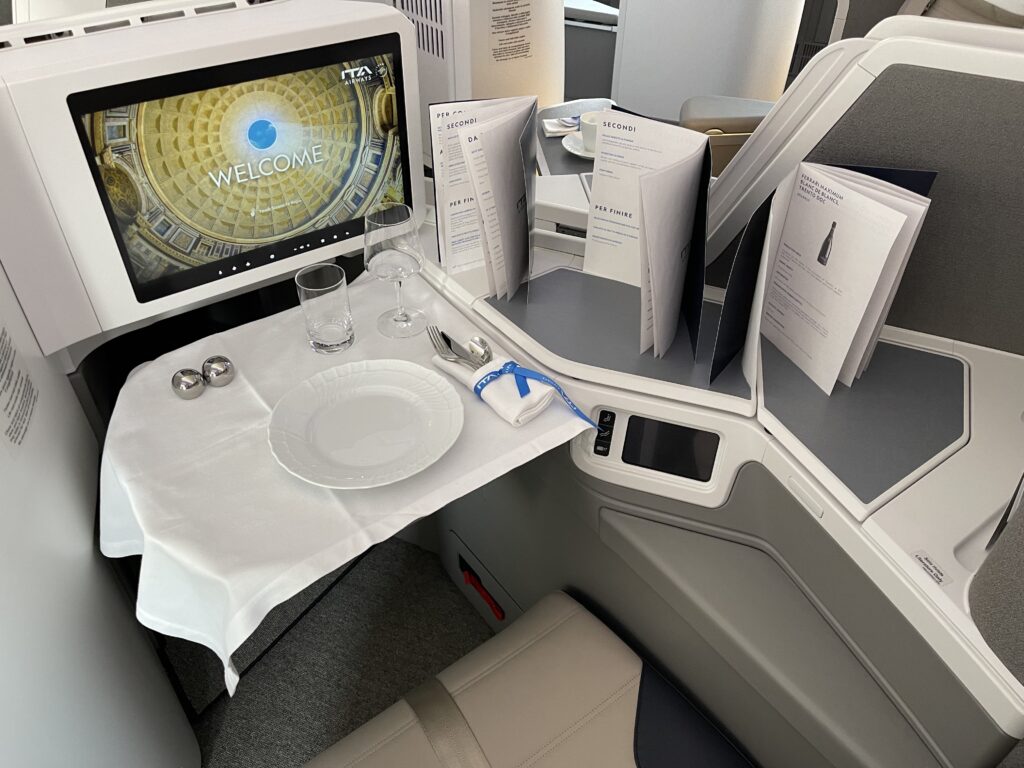 There was literally nothing in view, whether hard product or soft — with the faintly sad exception of a little bit of ribbon that tied the cutlery to the napkin — that had anything to do with the airline’s brand.

It’s an odd juxtaposition from the livery, the inspiration for which seems to be the Italian national team football shirt taken rather too literally, in that sort of “the plane flew through nonna’s washing line and got caught up in the shirt” way.

(That’s not the only way the livery is odd, by the way. The strange Louis Vuitton handbag-esque symbols on the rear of the aircraft are, an ITA representative at the airshow told your author, directly inspired by Italian designers. When asked which ones, or what the symbols represent, the representative could not say.) 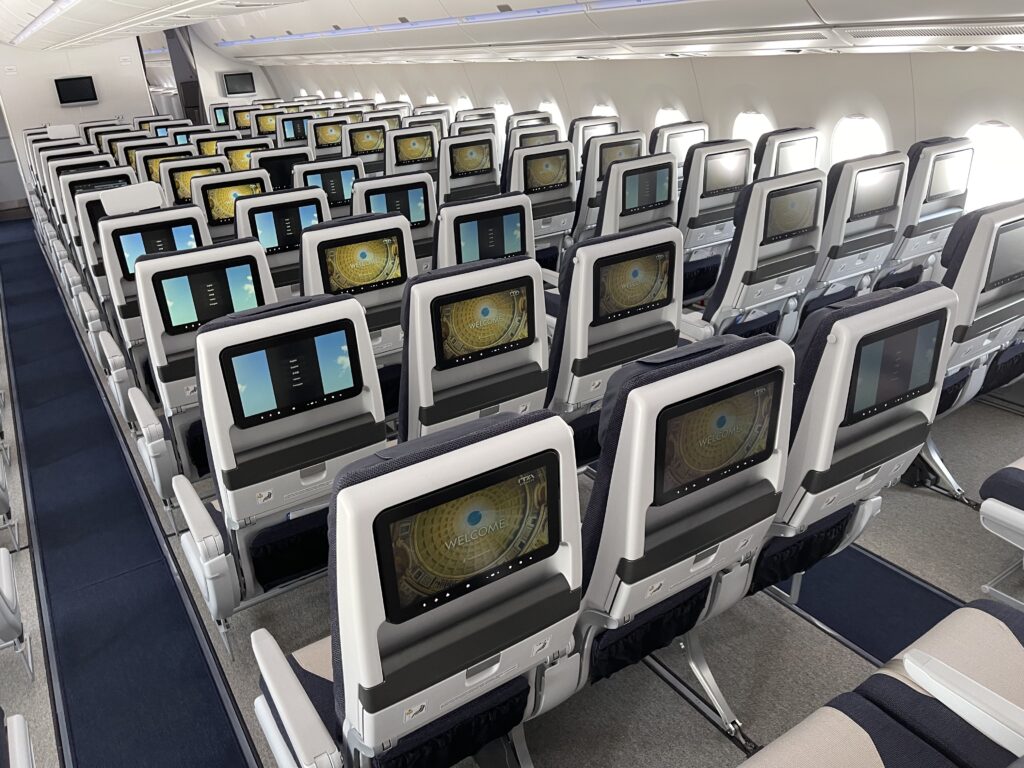 A positive note came from the rearmost cabin, where the slightly lighter greige reacted pleasingly with the blue and gold Airbus moodlighting in an interesting way, but the airline can’t rely on this in branding terms. 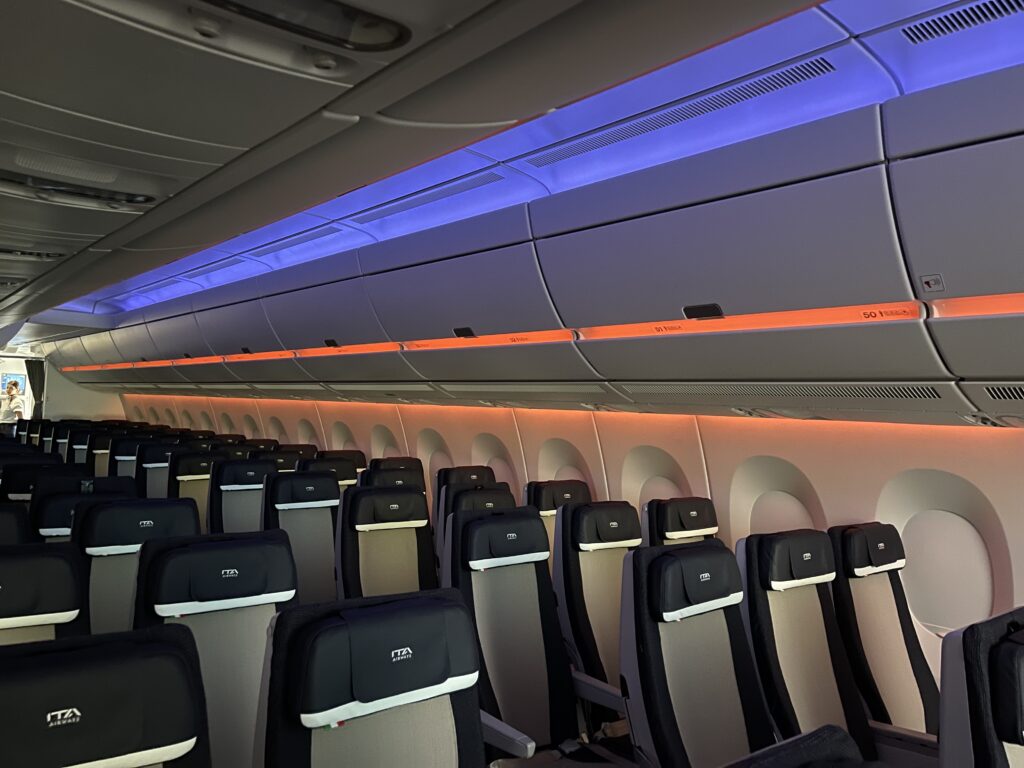 Oddly, the economy class was lit to look a bit more modern and elegant than the business class. Image: John Walton

The whole experience was rather odd, and reinforced the idea that ITA seemingly doesn’t know what it wants to be, apart from Not Alitalia.

A forty-five minute media briefing from the airline’s leadership at the airshow didn’t exactly clarify matters. ITA is the subject of a bidding war from competing parent groups: one from Lufthansa and MSC, one from Delta and Air France-KLM. With new direction, a new owner will hopefully be able to put much more of a stamp on the passenger experience than has, as yet, been managed. 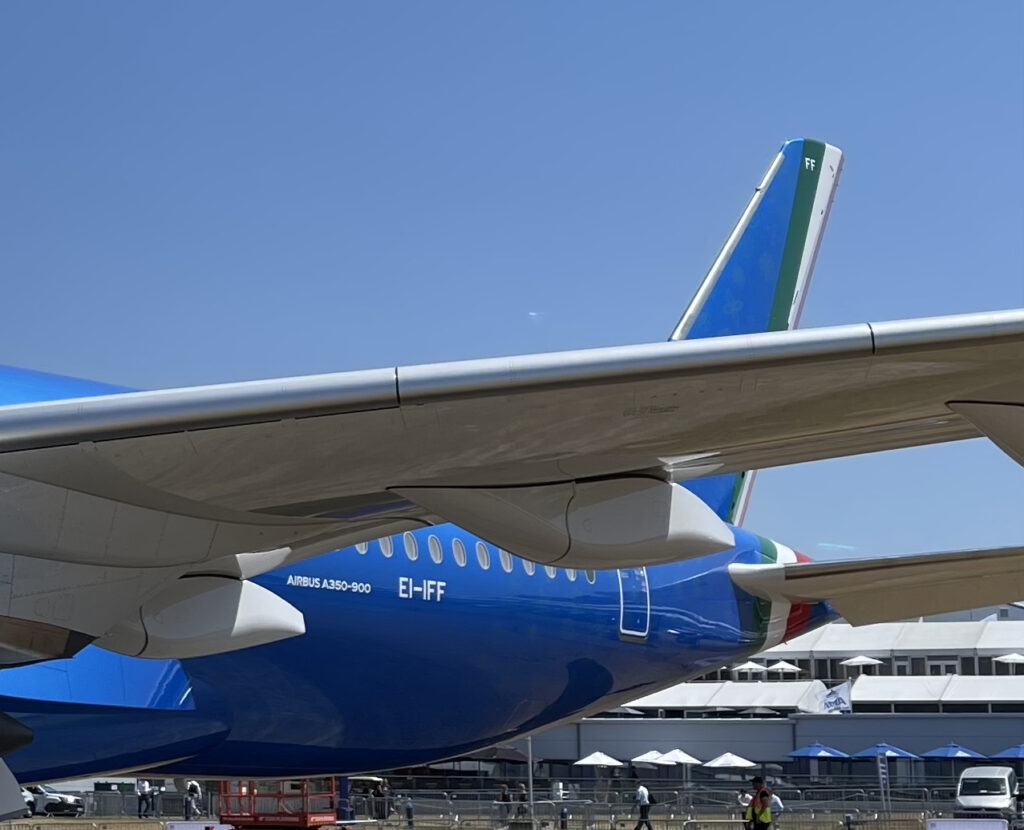 Apparently, those designs on the tail don’t mean anything at all. Image: John Walton