It’s no surprise that Qantas chose the Airbus A350-1000 for Project Sunrise. What is interesting is that it will have a large extra fuel tank, despite the airframer insisting on-record in 2019 that it wouldn’t need one. But beyond the technical achievements of the nonstop flight, quite a bit of the passenger experience onboard is surprising, and much of it in a good way.

At the front of the aircraft comes what is perhaps the biggest surprise: a new halo product of six first class suites, arranged in a 1-1-1 configuration. These are very much a departure for Qantas, which hasn’t installed first class on a new aircraft since its first Airbus A380 in 2008. Its A330s and 787s max out at the Vantage XL business class, which Qantas also débuted.

The basic concept is a forward-facing seat-plus bed, with the recliner seat closer to the aisle and the bed set up full-time rather than being presented as some sort of bunk affair. Interestingly, the rendering video (and to a lesser extent the more sketch-like images) show the bed at a slight angle, presumably to take into account the aircraft’s angle of attack.

In day mode, image renderings show an armrest for the chair, with the bunk arrangement being presented like a day bed. The real test of this product will be in the details during the twenty-hour flights. Will passengers sit more in the chair, or in the bed? Even the sleepiest passenger is unlikely to be fully horizontal for more than twelve hours. How will the day bed concept work? Will Qantas regret having given so much space over to an immovable bed rather than, for example, selecting a fold-down product that would mean the suites could be slightly narrower, enabling a 1-2-1 layout and thus an extra pair of seats in the cabin? 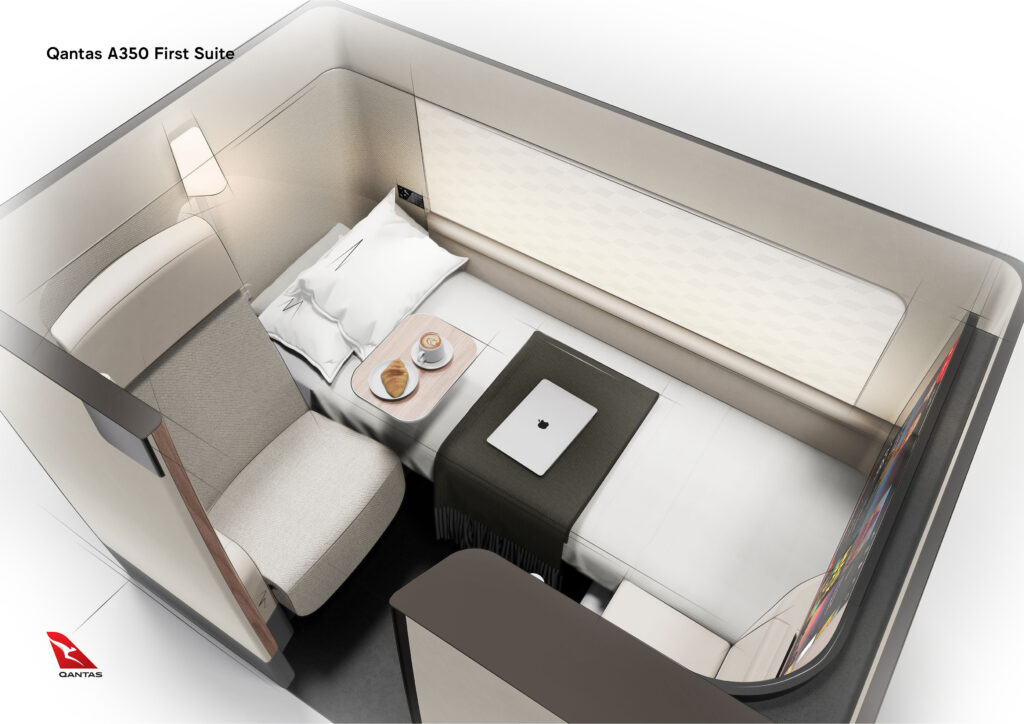 Behind first class in the cutaway comes a business class that appears markedly different to Qantas’ existing Vantage XL product, which it calls its Business Suite [PDF].

The current product (see the 787 seat map [PDF] is arranged in alternating seats with the seats in the central section in the pattern known as “divorce-divorce”, without a central pair of seats.

This new product is in the “honeymoon-divorce” pattern, where alternating rows have centre pairs, which will obviously be a boon for couples in the premium leisure travel market.

All that said, we would caution against reading too much into this rendering for two reasons. The first is very practical: US DOT regulations on accessibility require a minimum of 50% of seats in any cabin of service to have movable armrests that enable passengers using wheelchairs to transfer with dignity. This rendering, however, has 14 seats that are separated from the aisle by a console side table, and just 12 seats directly next to the aisle. It would seem possible to adjust this by changing only the forward outboard layout.

(Indeed, for such a long flight it would behove Qantas to make sure that the process for assisting disabled passengers, wheelchair users and people with reduced mobility out of the seat mid-flight to use the lavatory or avail themselves of the aircraft’s other features is as simple as possible.)

The second reason is the structure of the window seats, which seem to have a suite-height wall that would block the windows and prevent people from seeing any actual sunrises on Project Sunrise, and would also add substantial weight to the aircraft.

Continuing back in the aircraft, between the two business class cabins in the doors 2 space sits a massive double-complex that is a little handwavingly illustrated at this point, but which could be anything from a bar-lounge to a more humdrum set of galleys. 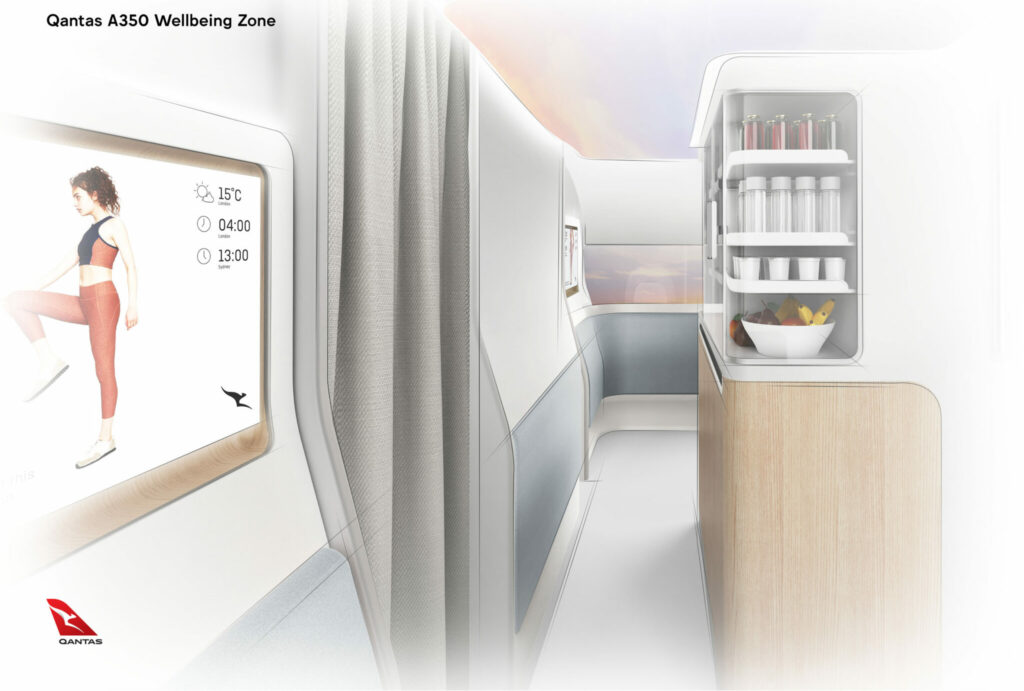 Behind business class is the 2-4-2 premium economy cabin, and behind that economy in 3-3-3. Together, these are a little under-detailed, and look to cover less than half the aircraft, and the big news here is a Wellbeing Zone, which in renders seems to offer a bit of a slightly cushioned perching area more than anything else. 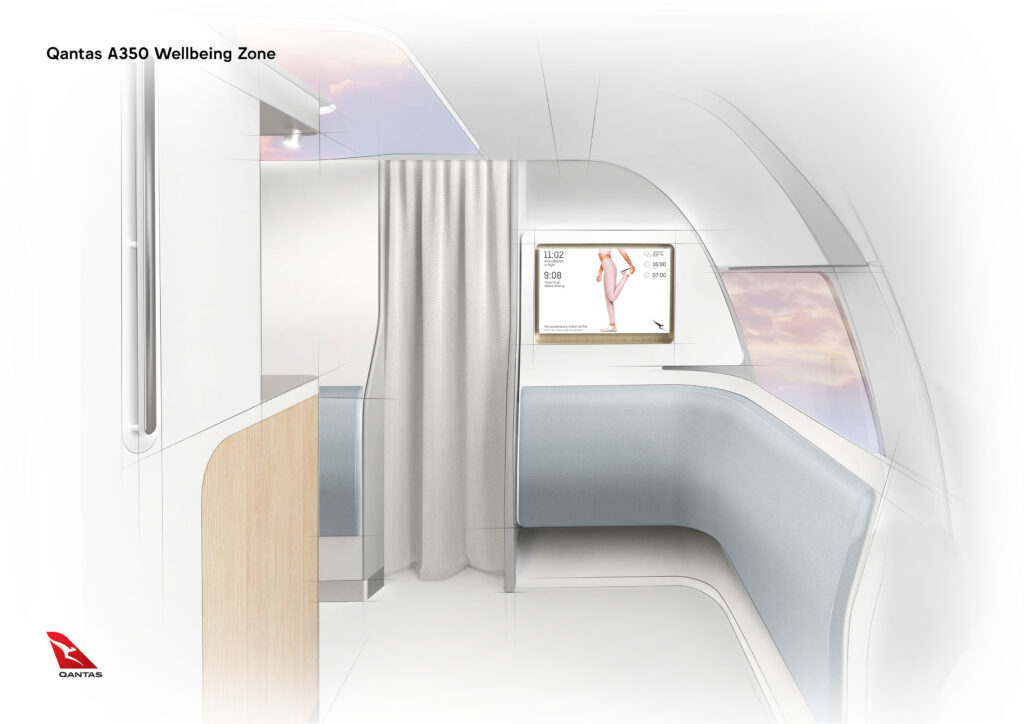 Airbus will take 12 of the A350-1000s for delivery “by the end of calendar 2025 from Sydney”. Presuming a two-aircraft requirement for the roughly 19-hour flights to London destination — one on the outbound, one on the return — that would suggest six city-pairs would be possible with these aircraft. Qantas could look to return to Frankfurt or Paris, add other US cities like Chicago, or operate to and from Brisbane or Melbourne, or some combination thereof.

All images credited to Qantas