Airbus has never officially confirmed that its entrant for the Qantas Project Sunrise competition, for nonstop flights from Sydney to New York and London, is the A350-1000 — until today. Speaking to Runway Girl Network from Toulouse, A350 head of product marketing Marisa Lucas-Ugena confirmed that Airbus is submitting the A350-1000 for configuration, and not in an extra-fuel-tank ultra-long-range ULR subtype either.

“We are responding to the challenge with the A350-1000, which is already an extremely capable airplane. In 2022 it will be capable of flying 380 passengers, almost, for 8700nm,” Lucas-Ugena told RGN. “In 2022 the developments that we are working on on the airplane on the slightly higher maximum takeoff weight than what we have in service will bring it to that range.”

Airbus was cagey about revealing the exact improvements it is making to the A350-1000 in order to certify additional MTOW, but this sort of incremental addition would be a normal part of aircraft in-service development as conservative planning assumptions and early manufacturing processes are tested and revised in-service.

“There are some slight changes on the airplane,” Lucas-Ugena said. “It’s a typical evolution of our product… at the beginning of its life. We are bringing to the surface the potential this airplane has. The original range capability of the airplane was around 8000nm: that was the headline figure that we had pre-flight. That was the target we had for this airplane. We have a phenomenal potential, and what we’re getting in 2022 is the more than 700 nautical miles more range than we had marketed initially.”

This 375 passengers for 8700nm range number will just about meet the Sydney-New York leg of Project Sunrise, but will not, however, cover Sydney-London. On a Great Circle routing, Sydney-London is 9177nm, rather more than JFK-Sydney at 8646nm, according to gcmap.com. Of course, westbound headwinds and the usual requirement for reserves, especially over the Pacific, will require additional fuel and thus reduced payloads.

That reduced payload is not necessarily a dealbreaker for Project Sunrise, however. If Airbus is giving a 375-passenger A350-1000 an 8700nm range, that is a substantially heavier payload than any A350-1000 operator apart from ultra-dense Air Caraïbes.

It is very hard to imagine Qantas putting more seats on their A350-1000 than the three class (business, premium economy, economy) configurations on British Airways (331 seats), Cathay Pacific (334 seats) or Virgin Atlantic (335 seats). Even the two-class Qatar Airways Qsuite business/economy configuration has only 327 seats.

(Cathay Pacific already operates the A350-1000 on Washington Dulles-Hong Kong, a 7085nm journey.) 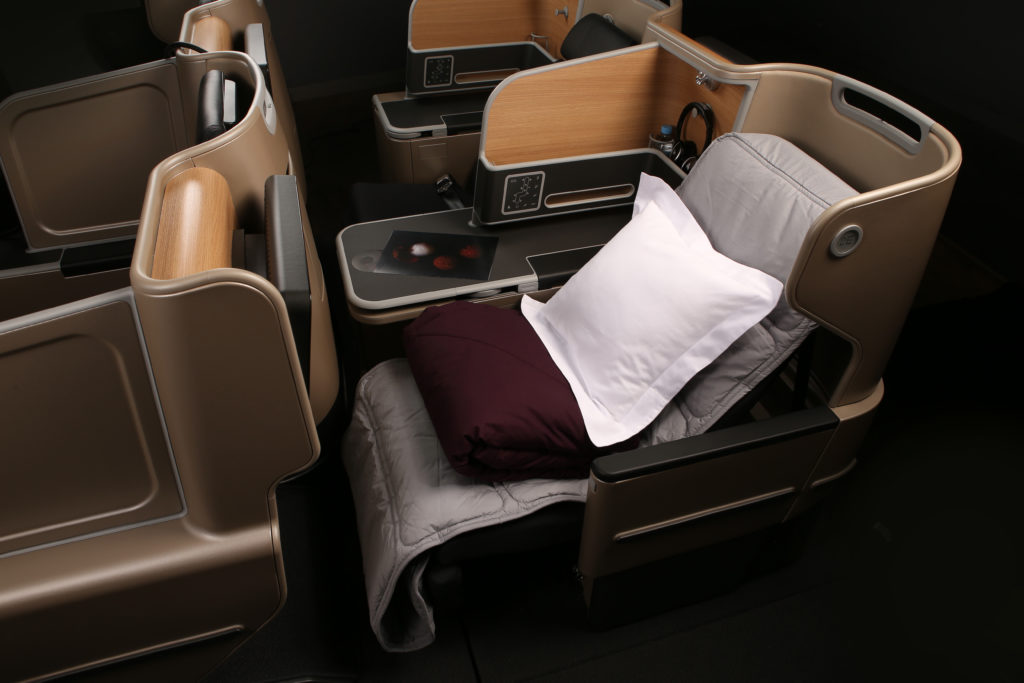 Airbus did not provide details such as LOPA (layout of passenger accommodations) seat maps to show how it would get to 375 passengers while maintaining business class between doors 1 and 2, although Lucas-Ugena suggested that was the planning assumption, combined with four rows of premium economy. She also confirmed that the 375 number does not require ten-abreast economy class seating on the A350.

As some form of comparison, Qantas offers 236 seats on its three-class Boeing 787-9 aircraft already flying Perth-London and soon Brisbane-Chicago. Virgin Atlantic’s 787-9, which is also three-class, offers 258.

Given the high premium cabin expectations for Project Sunrise, therefore, one could imagine an A350-1000 seating around 300-320 passengers, depending on whether business class extends behind doors two, as it does on British Airways.

Clearly, Airbus thinks that will be sufficient for Project Sunrise. Will Qantas?