For those considering flying down the back of Qantas’ ultra-ultra-longhaul Project Sunrise flights between Sydney and New York or London, details are few on what to expect. The only product reveal so far has been the first class product, with some light detail on business class in the cutaway diagram, carefully marked “Artist impression only, subject to change” by Qantas.

Of premium economy we know the number of seats and the pitch in inches: both are 40. Qantas is, it seems, also including premium economy in its “over 40% of seats in premium cabins” line: adding up the total of first, business and premium gives 41% of the total seats on board.

The cutaway shows standard-looking premium economy seats in the 2-4-2 premium economy layout that has won out over the 2-3-2 option (chosen by a few airlines early in the A350’s delivery schedule) to become essentially the standard for the A350. These five rows of eight neatly sum up to the forty seats on offer, and nothing in the cutaway or the marketing materials seems particularly revolutionary in terms of cabin layout.

There are a couple of visual cues to note on the (we emphasise again) subject-to-change cutaway. 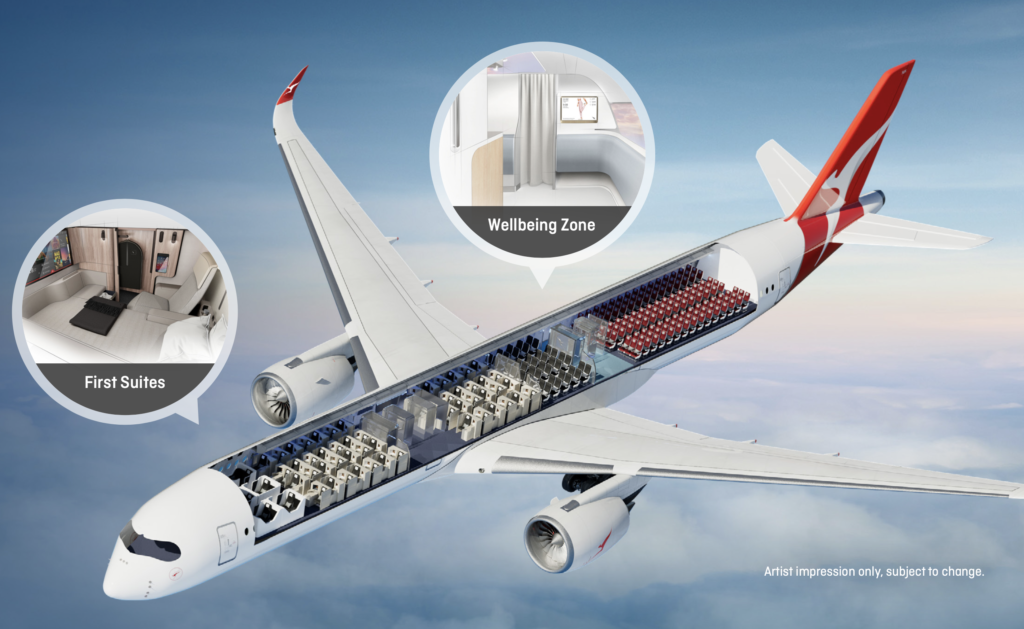 The first is that in the central block of four seats, it appears that the two middle seats are spaced slightly further away than the rest, which could well mean that Qantas is aiming towards one of the products that offers the double-armrest between the two middle seats, like the ZIMprivacy seat selected by Lufthansa and Swiss.

The second visual cue is in the seatbacks, which seem to be illustrated as if they are of the shell kind that slide forward instead of reclining backwards. This would be an interesting choice for Qantas, and a departure — its current premium economy seat has a very deep recline, to the extent that window seat passengers find it hard to pop out if the aisle seat in front is reclined.

Economy and premium economy are separated by the doors 3 zone, which is a bit handwavey on the cutaway. This appears to be the location of the Wellbeing Zone, with its cushioned perches and stretching areas.

Down the back, Qantas promises a 33” pitch for economy, which is a good inch or two ahead of where most premium airlines are pitching their economy these days.

In the cutout, what appear to be standard economy seats stretch between doors 3 and 4 on the A350-1000, across 15 rows of seats, all laid out in the standard 3-3-3 configuration.

While we again emphasise the subject-to-change disclaimer for this cutaway, one does not need to have gone to school for math to realise that fifteen rows of seats in a nine-abreast layout does not multiply to 140 seats, but rather 135.

It’s not immediately clear how the remaining five seats could be found within this layout — the cabin math doesn’t work to add either a central section row (3 seats) or a mirrored pair of outboard sections (4 seats).

One option is a central section row of 3 plus an asymmetrical outboard pair of 2, perhaps to accommodate an extra lavatory on one side only, but this would be quite unusual in the widebody context. Some airlines’ A350s have two-seat rows immediately after doors 3, but these are indeed usually symmetrical. Cathay Pacific, for example, has 17 full rows, plus a row of 3 in the centre section at the rear, and a row of 7 at the front as a 2-3-2 row.

Far be it for this journalist to speculate, but could Qantas actually be planning to install the ultra-narrow 3-4-3 configuration, in what would presumably be the forthcoming sidewall-shaved A350 cabin version? 14 rows of 10 seats rather neatly adds up to 140 seats.

Qantas responded to questions from RGN on the topic only with background information that did not answer the questions. Airbus responded to separate questions on the sidewall-shaved A350 only by directing us to its previous response from six months ago. We will continue to press for answers.

A spoiler to all the cabin mathematics might be the oddity that the cutaway shows three windows at the rear of the cabin behind a fully blank bulkhead wall. Presumably this is a bit more artist’s handwaving, not least because the rear exit needs to be accessed, as does the rear galley and lavatory complex.

As an interesting coda to the whole question comes an unusually public open proposal to Qantas from seatmaker Molon Labe, which took the surprising step of issuing an offer via a press release to supply the airline with its S2 staggered seat, which industry longtimers may remember from its Panasonic-BMW DesignWorks collaboration back at AIX 2017. 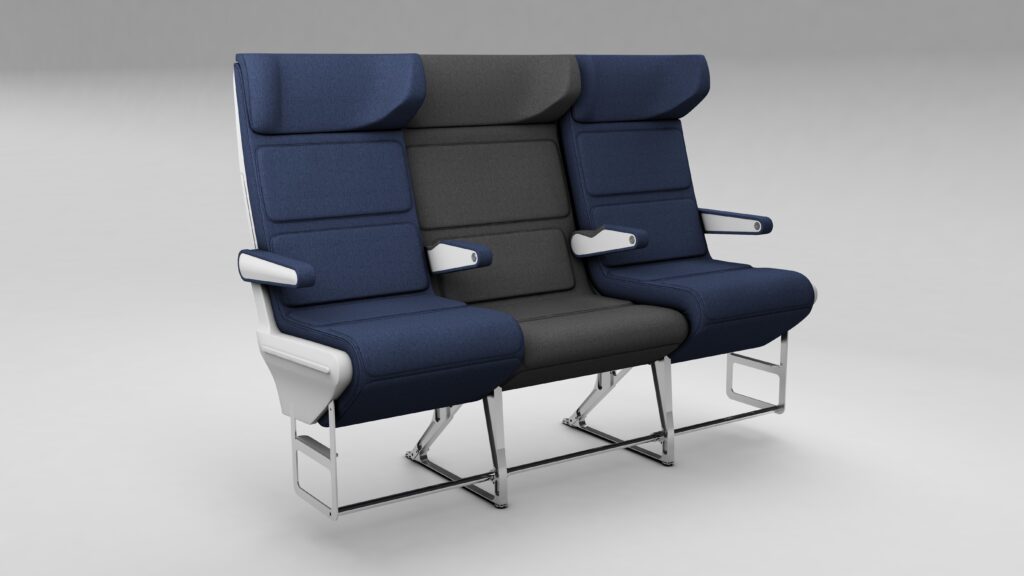