Swiss is rolling out its newly unveiled premium economy cabin at speed, with all of its Boeing 777 routes to offer the new ZIM seats by the end of May. The base product is ZIMprivacy, a slide-forward premium economy seat also ordered for Lufthansa, which on Swiss reclines 31 degrees forwards rather than reclining backwards into the space of the passenger behind. This is unusual for premium economy, and it will be interesting to see the passenger reaction.

Relatively large 15.6-inch inflight entertainment screens would be in the head pivot path, and it may have been easier to add a third restraint point rather than delethalise these screens. That said, the third point will increase the amount of force at the top of the seat, which will have required structural reinforcement, adding weight at the top of the seatback.

Also adding weight in the seatback is the bifold table, which folds down rather than being raised out of an armrest. This is largely positive for passenger experience, given that the space at seat pan level previously used for the table can now be given over to the passenger. 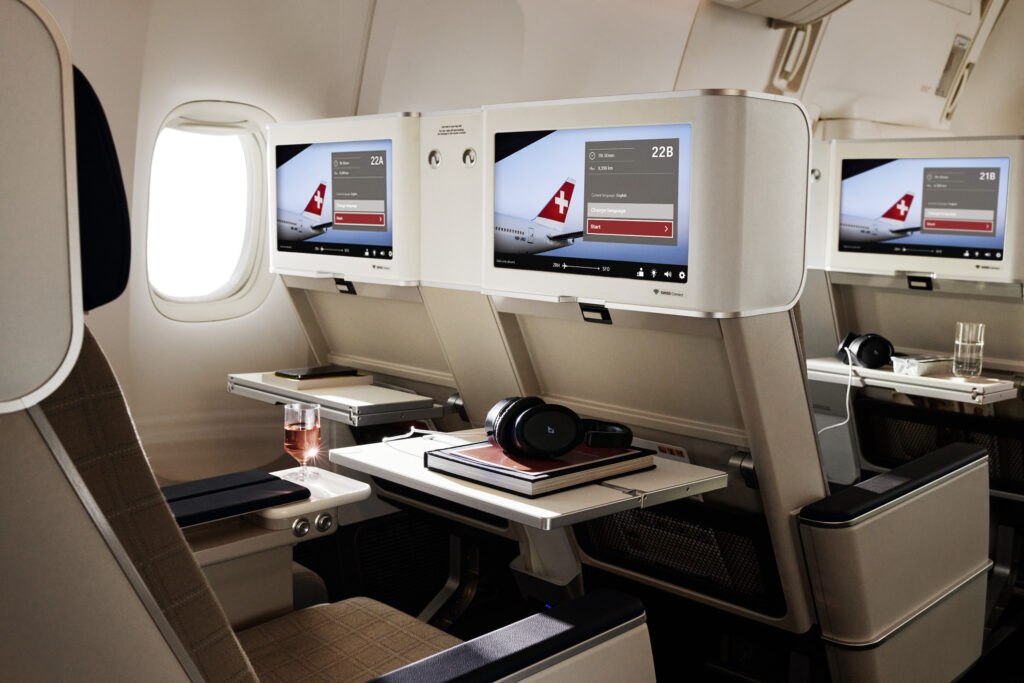 The large table unfolds from the seat in front. Image: Swiss

ZIM’s information for the seat says that the product offers a “last row airbag system for integration of one additional seat row in the aircraft”, which would presumably protect the economy passengers behind.

It also looks like the 2-4-2 configuration is made up of pairs of seats, with the centre four appearing as if they are two separate pairs, although it would be likely that they are connected together for structural integrity reasons. In any case, it would seem that this choice would substantially reduce the part count, stock requirements and maintenance overheads for the seat, but is likely to again add weight. Legrests are shown in multiple rows, and not just for the front row of the three. 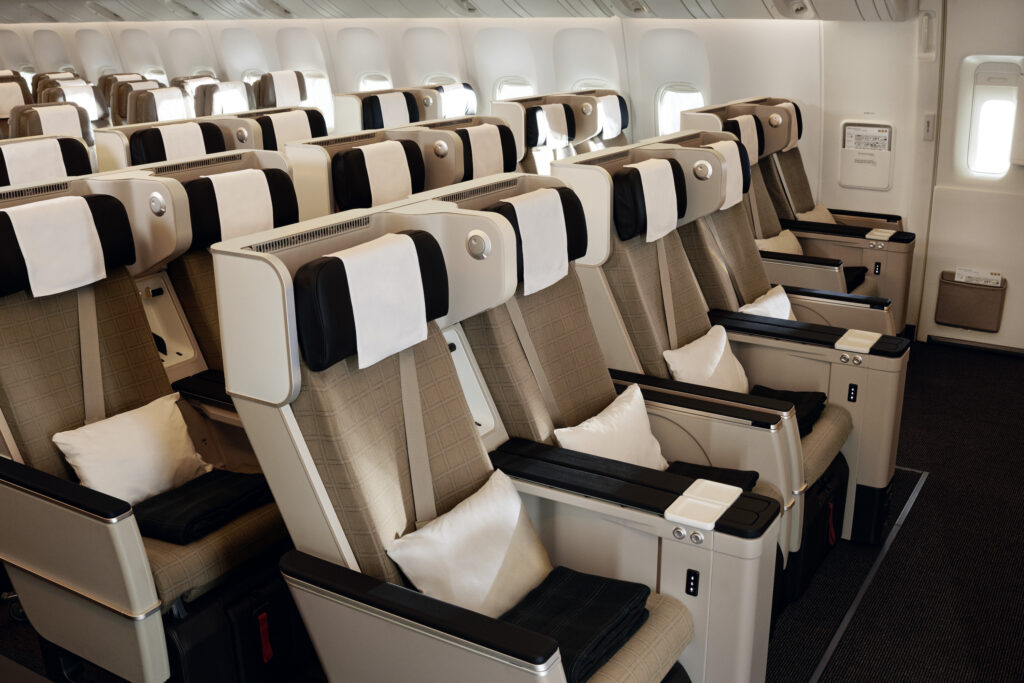 The ZIMprivacy seats look as if the centre seats come in two pairs. Image: Swiss

The three-row cabin will be installed directly ahead of regular economy, it appears from the PR photos, with no visible screen or other cabin differentiation, and with a large stagger to the aisle in the middle of the cabin, which must surely be factored into evacuation considerations.

There could also be #PaxEx challenges for the people seated in the front side aisle seats of economy and the rear centre seat in economy. 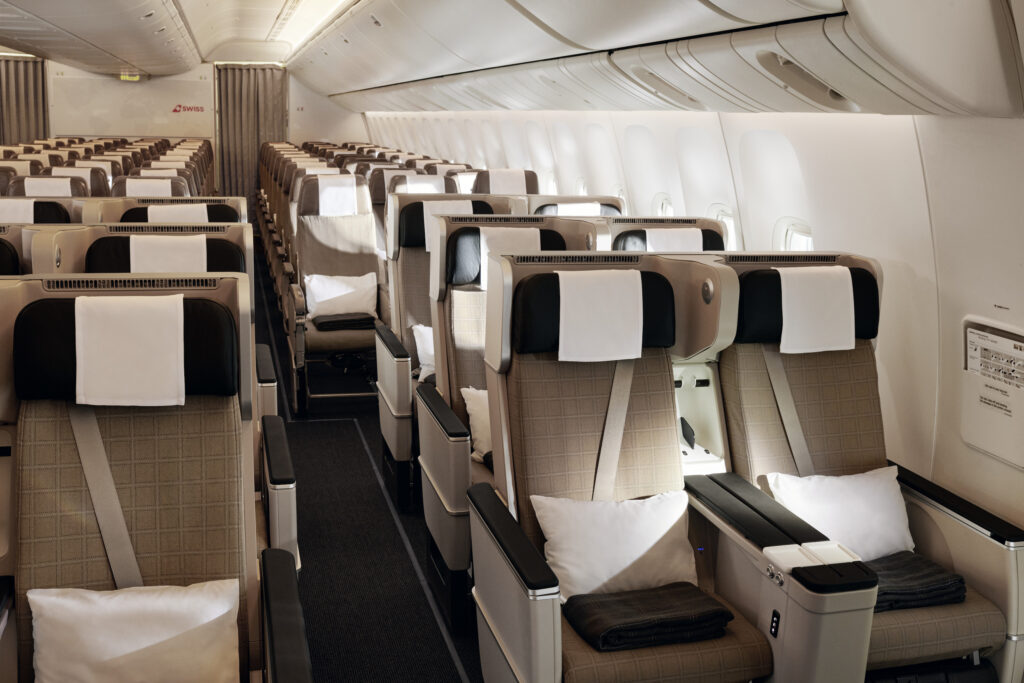 Passengers will be able to visibly swan it up in more spacious seats in full view of the least comfortable seats on the aircraft. Swiss is planning a welcome drink service for premium economy it may all feel a bit awkward. Image: Swiss

Three main dish options are planned for the inflight dining, which looks like it will be a tray-based service with real silverware and glassware. If Swiss follows Lufthansa’s lead, this will essentially be a spruced-up version of the economy meal — again, served in full view of economy. 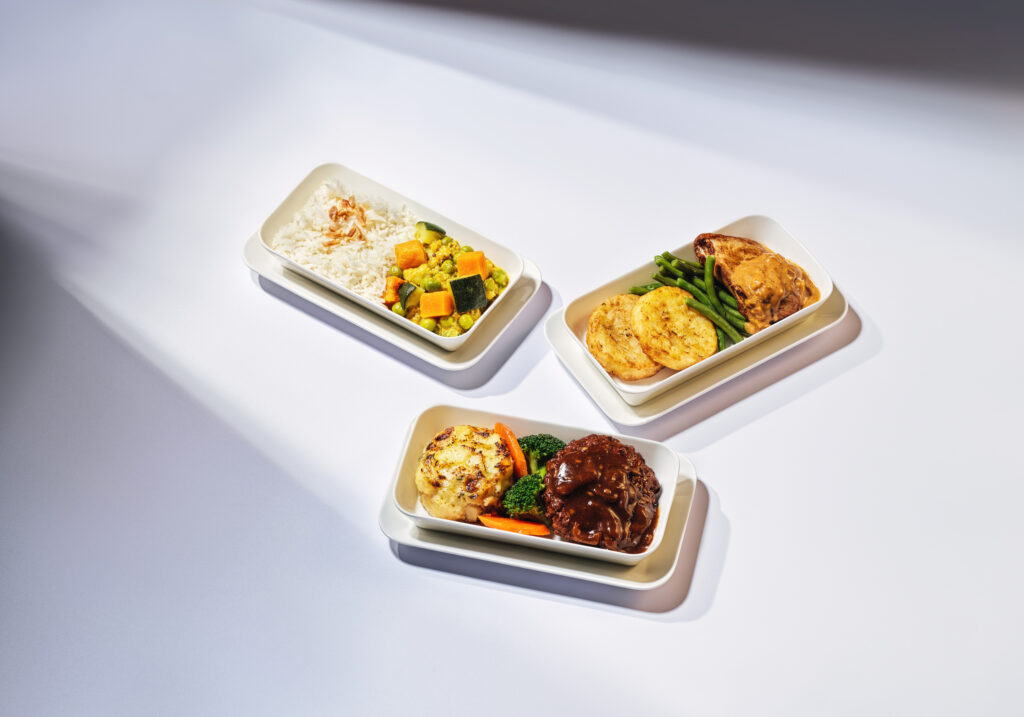 Three meal choices will be on offer in premium economy. Image” Swiss

Broadly, the fit and finish looks very 1970s Swissair: dark tans, beiges and browns with the checked square pattern that has been a hallmark of the Swiss national carrier’s premium cabins for some decades now.

“In an initial step, SWISS’s new Premium Economy Class will be successively installed in all 12 of its Boeing 777-300ERs,” says the airline.

Starting in March, the carrier’s Miami flights will feature the new interior. San Francisco and São Paulo will begin in April, and all flights will see the new product from end of May.

During what Swiss calls the “introductory phase”, upgrades will be on sale to economy passengers during checkin and at the gate.

Separately, nine of Lufthansa’s Boeing 747-8 flagship aircraft are also slated to be fitted with this ZIM seat, customised with trim & finish variants for the German operator.

Press Release: SpaceX Falcon 9 to launch Inmarsat’s next I-6 satellite