Watching Russia’s aggressive war on Ukraine unfold in real time online is an inexplicable experience from within the aviation industry. Even as we see the horror of the ground-targeting missiles we walk past at airshows like Farnborough and Paris rain down on Ukrainian cities and civilian targets, we see the ground-to-air weaponry also present at these events in action as well.

The horrors of war, and the all-too-visible evidence of war crimes, are interspersed with sports and culture in our social media. Russia’s war, and the consequences of it — most visibly the destruction of the Antonov An-225 Mriya, or “Dream”, the world’s largest operating aircraft — resonate throughout aviation, including the commercial flight world.

Exact comparison between SkyNews footage (19:45 UTC) and Google Earth imagery of 🇺🇦Kyiv Gostomel Airport confirms that the hangar on fire is indeed the one used for housing Antonov An-225 reg. 🇺🇦UR-82060: pic.twitter.com/w4kRMJ1uPm

Overflights are here, and lessor repossessions are coming

The overflight bans for Russian airlines that descended across the western borders of Russia and its cobelligerent Belarus are already having consequences. Their implementation, and the existing and reciprocal prohibitions by Russia, will have substantial effects, which is of course the point.

After early moves by the United Kingdom, Poland and Slovakia, more bans were imposed, including the by the EU late on Sunday 27 February, announced by European Commission President Ursula von der Leyen.

“We are proposing a prohibition on all Russian-owned, Russian registered or Russian-controlled aircraft,” von der Leyen said. “These aircraft will no more be able to land in, take off or overfly the territory of the EU.”

Flights between Europe and much of Asia usually overfly Russia, with Finnair one of the most exposed. CEO Topi Manner said today that “bypassing the Russian airspace lengthens flight times to Asia considerably and, thus, the operation of most our passenger and cargo flights to Asia is not economically sustainable or competitive”. The airline is in discussions with its government, with minister Tytti Tuppurainen stating that, “for the State of Finland, Finnair is a company of strategic interest. The company has stated it is considering different solutions. We have an active dialogue with the company.”

“This will apply to any plane owned, chartered or otherwise controlled by a Russian legal or natural person,” von der Leyen emphasised. “So let me be very clear. Our airspace will be closed to every Russian plane – and that includes the private jets of oligarchs.”

This “owned, chartered or otherwise controlled” aspect is crucial for the commercial aviation world, given the preponderance of Russian civilian aircraft registered in other countries, largely flags of convenience such as the Cayman Islands or Barbados.

Indeed, the Airfleets database shows much of Aeroflot’s fleet, including Airbus A350s, A330s and Boeing 777s, are registered with codes [PDF] belonging to Bermuda (VP-Bxx, VQ-Bxx) rather than Russia (RA-xxxxx).

In the case of leased aircraft, western lessors based in the many countries that are imposing sanctions on Russia, which often include the provision of aircraft and/or aircraft parts, will now need essentially to repossess their aircraft.

In practical terms, during a time of war and with dramatically curtailed air service to Russia, this is likely to be even more difficult than what was already a complicated task previously.

Returning to the airspace closures, an incident occurred on the night of Sunday 27 February with Aeroflot flight SU111 from Miami to Moscow Sheremetyevo overflying the airspace of Canada and later Greenland. Both countries had NOTAM prohibitions in place banning Russian-operated aircraft from overflight.

Crucially, overflight bans can only apply to the land and territorial waters of a state, which usually extend to the twelve nautical mile limit laid out by UNCLOS, the United Nations Convention on the Law of the Sea, and the 1944 Chicago Convention that established ICAO, the International Civil Aviation Organisation.

This is an exceedingly complex area of specialised international law, but the practicalities are that, in this case, that Canada is able to prohibit overflight of its land and twelve-nautical-mile sea territory, but not (for example) the Gander Oceanic Flight Information Region to its east, for which its air navigation service, NAV CANADA, provides oceanic control under ICAO delegation.

That legal situation is why Canada’s announcement of the overflight bans prohibited specifically “the operation of Russian-owned, chartered or operated aircraft in Canadian airspace, including in the airspace above Canada’s territorial waters”.

Aeroflot flight SU111 from Miami, however, crossed the Canadian border in rural New Brunswick after the prohibition was put in place.

“We are aware that Aeroflot flight 111 violated the prohibition put in place earlier today on Russian flights using Canadian airspace,” Transport Canada said in a statement late in the night of Sunday 27 February. “We are launching a review of the conduct of Aeroflot and the independent air navigation service provider, NAVCAN, leading up to this violation. We will not hesitate to take appropriate enforcement action and other measures to prevent future violations.” 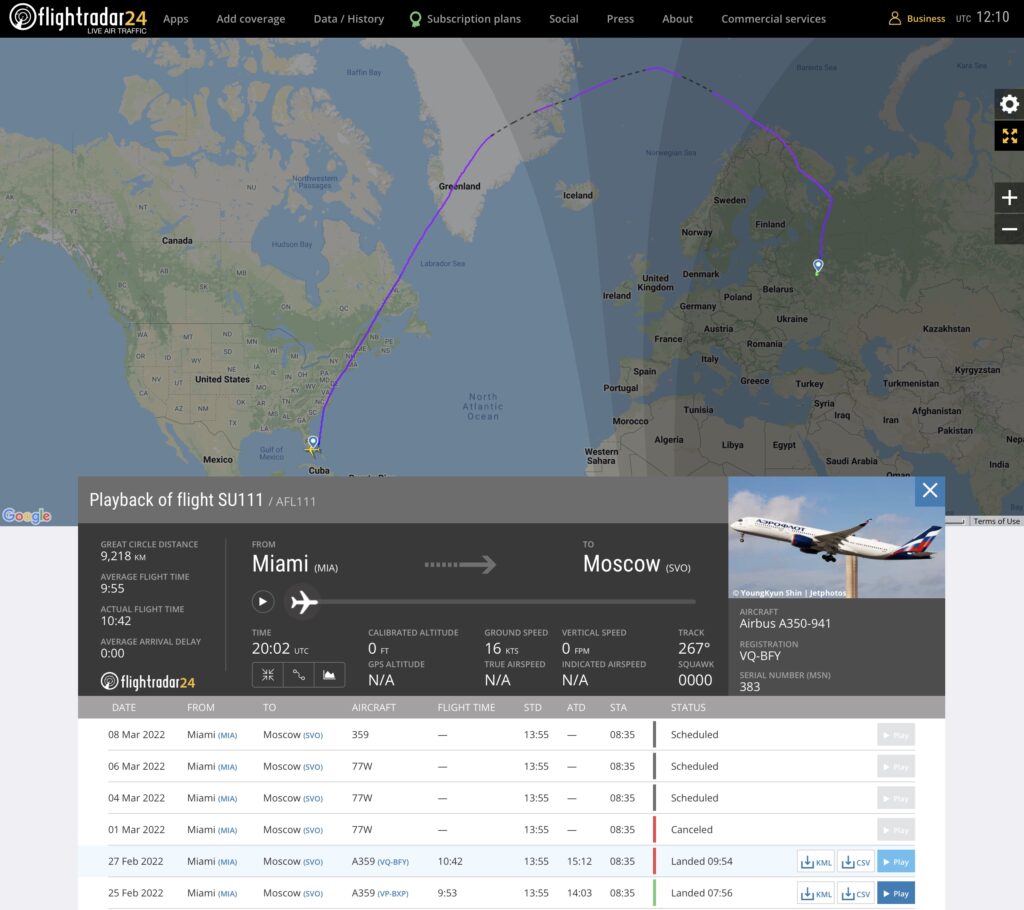 It is as yet unclear why this aircraft was permitted to overfly a thousand or so kilometres of Canadian territorial airspace, but it should be noted that Aeroflot flight SU157 from Punta Cana to Moscow later that evening skirted around this airspace. 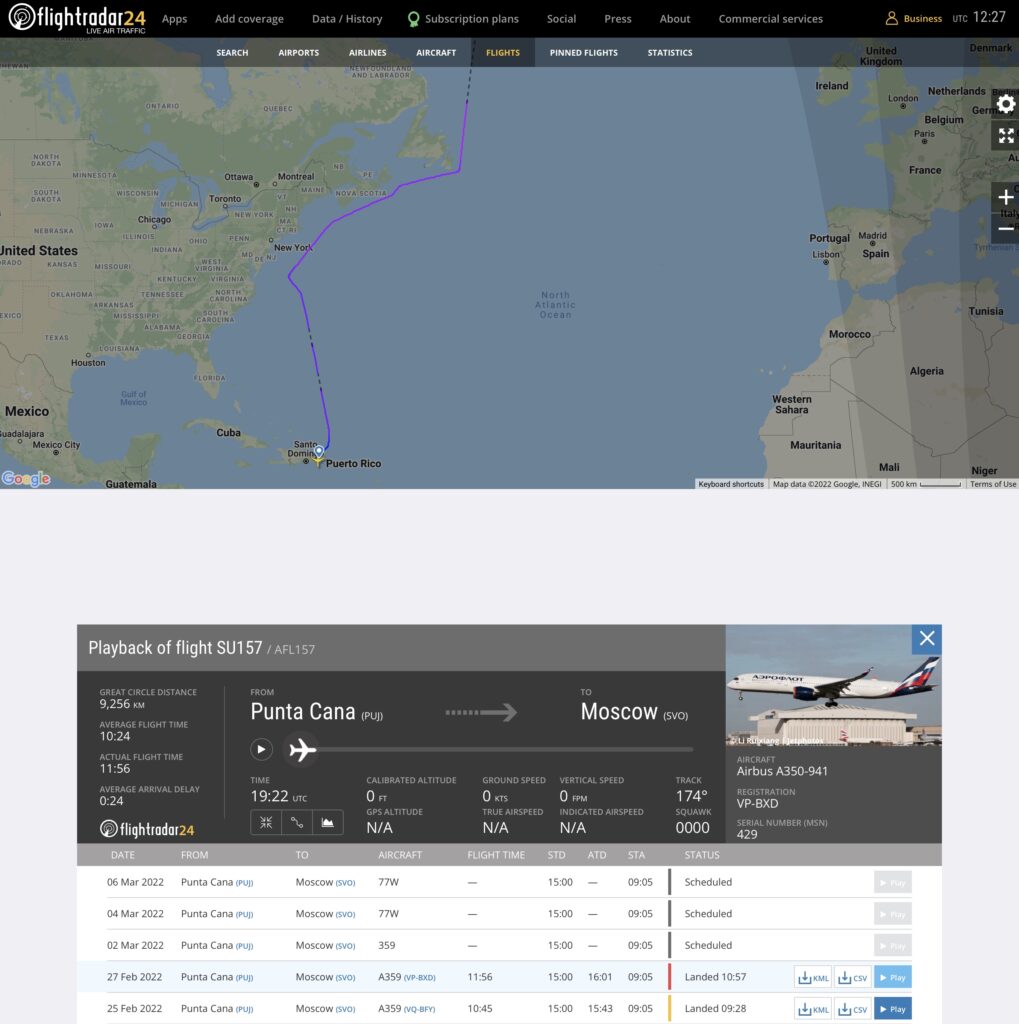 Writing of SU111, the Wall Street Journal’s Aly Sider reported at the time that “in another twist, NAV Canada says that this flight’s operator declared it a humanitarian flight as it entered Canadian airspace, requiring special handling.”

While the Transport Canada investigation into the SU111 situation will be enlightening, there are plausible scenarios as to why it was permitted.

It would be plausible if this were a situation where a regularly scheduled flight that operates multiple times a week over this airspace was granted in administrative error.

It would also be plausible if, after the aircraft were already in the air from Miami several hours to the south, diverting around Canadian airspace might have had fuel load implications, and a decision made to allow it to continue rather than to have to land and refuel at a Canadian airport with the inherent complexities of refuelling, recrewing and accommodating its passengers.

And, of course, it would be plausible if in fact the aircraft were quietly permitted to return with its passengers to its base, in order to avoid a situation of having a Russian aircraft stuck outside Russia at a time where international tensions are already high, rather than to either divert it or escort it to international airspace with military aircraft.

Given the geopolitical situation, is likely that this Canadian overflight will be just one of many issues around Russia’s war on Ukraine that has an impact on commercial aviation.

Runway Girl Network stands in solidarity with the people of Ukraine and all those suffering from the unjustified assault on this democratic sovereign state. Mary Kirby, editor and publisher

Inside the unusual aspects of Swiss’ new ZIM premium economy