Renewing its investment in the short-to-medium-haul, midrange slimline economy class seat market, Recaro is unveiling its BL3710, the company’s successor to the widely ordered BL3520 and BL3530. Designed with a modular seatback to enable airline passenger experience options and to meet the increasingly complex neck injury criterion, the seat has already been certified, selected by two airlines, and will fly later this year.

Speaking to Runway Girl Network at the Aircraft Interiors Expo, Recaro senior product manager Hans Jürgen Reuber explained that “the main focus we’ve been having is to optimise the total cost of ownership for airline customers. It’s not only about weight — you can make the seat a lot lighter if you want to — but in that case, reliability or comfort for passengers would suffer.”

“We’ve tried to find the right balance between weight, comfort, reliability and every key buying factor that is important for the airline customers,” Reuber said,  “and also for the airline passengers. The result is BL3710, and it’s also very flexible.”

RGN journalists measuring 6’1” and 6’3” sat in the wider A320 family version of the seat pitched at both 30” and 29”. Compared with previous generations, the BL3710 carved out a remarkable amount of space, especially at knee level. 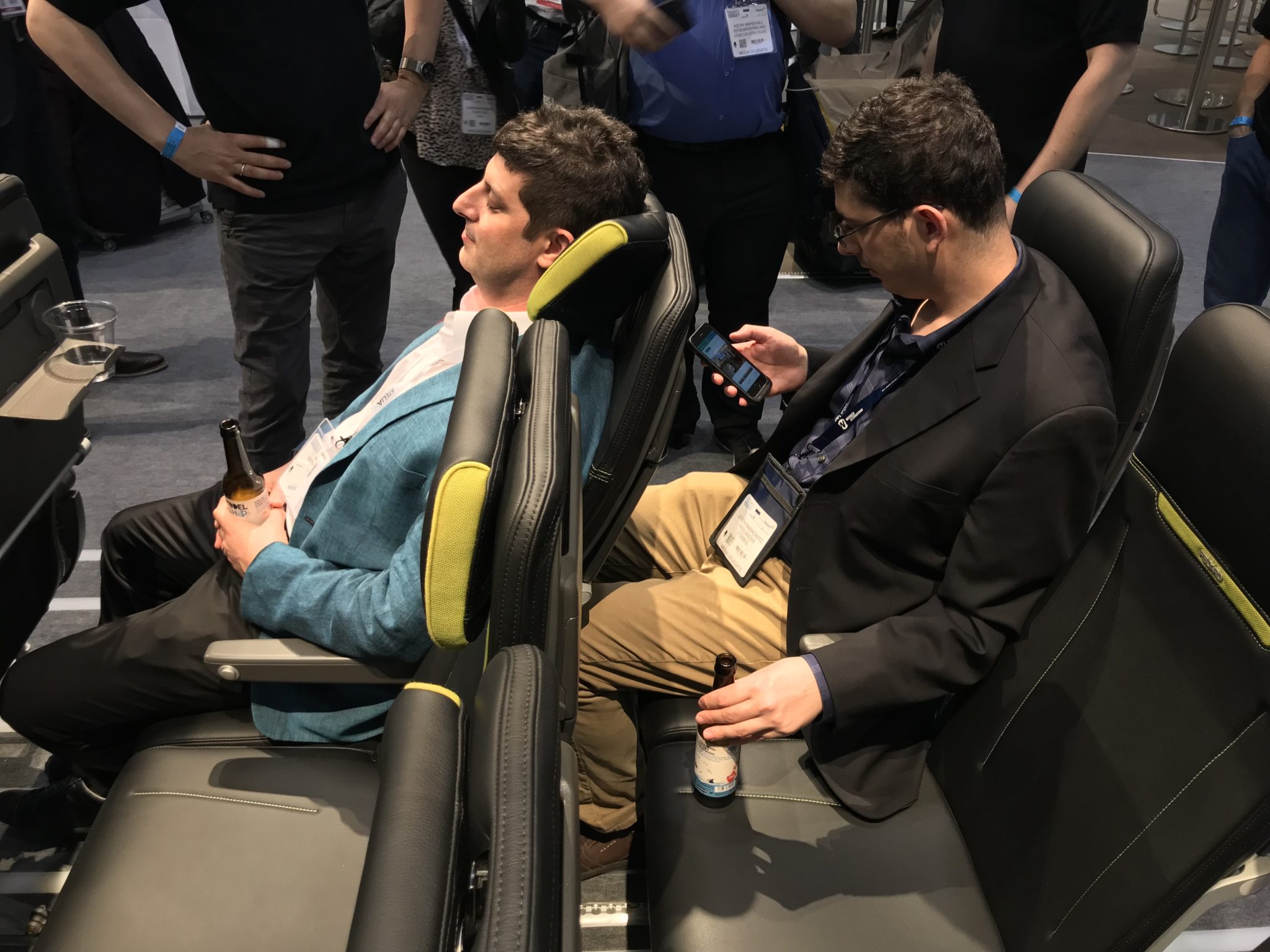 With the 30″ pitch row reclined but the 29″ row upright, Recaro has managed to eke out an impressive amount of space. Image: John Walton

A traveler noted on social media that working on a laptop would be a ‘no-go’. However, in this regard, the BL3710 is certainly not alone.

So getting some work done on a laptop is a no-go, clearly.

Compared with the BL3520 (the seat Lufthansa launched as the NEK some eight years ago), “we are having around 1kg per pax less weight in the seat,” Reuber said, and the official Recaro line is that the seat is “below 10kg” per passenger.

“The structure basically is not so much different” to the BL3520, Reuber said. “It’s really optimised. We took a lot of effort to take weight out of the structure, and this was the main contributing factor for the weight reduction, optimising the seat structure and at the same time fulfilling all the severe certification requirements. We also changed the backrest architecture to find a solution so we do not have any issues with the neck injury criterion.”

This criterion, also known as Nij, is designed to avoid neck injuries from passengers striking the seat in front of them with their nose or chin and thus placing force on their neck.

Recaro will continue producing the previous generation seats, BL3520 (the Lufthansa NEK slimline) and BL3530 (the seat that is provided as supplier-furnished equipment as the 3530Swift) alongside the BL3710. Reuber cited the wide certification base of a variety of customisation options for the previous generations as an advantage, which helps to create a the short notice window that is particularly attractive to leasing companies.

Meanwhile, Recaro’s sales pitch for the BL3710 to airlines, Reuber said, is that “this is the latest and greatest, weight optimised, perfect total cost of ownership — not only the selling price, the cost for maintenance, fuel burn. There’s a lot of features that we can show, so the seat that you are sitting in is equipped with a headrest, the same headrest on the CL3710. You can also equip it as a lightweight optimised basic seat for low-cost carriers.” 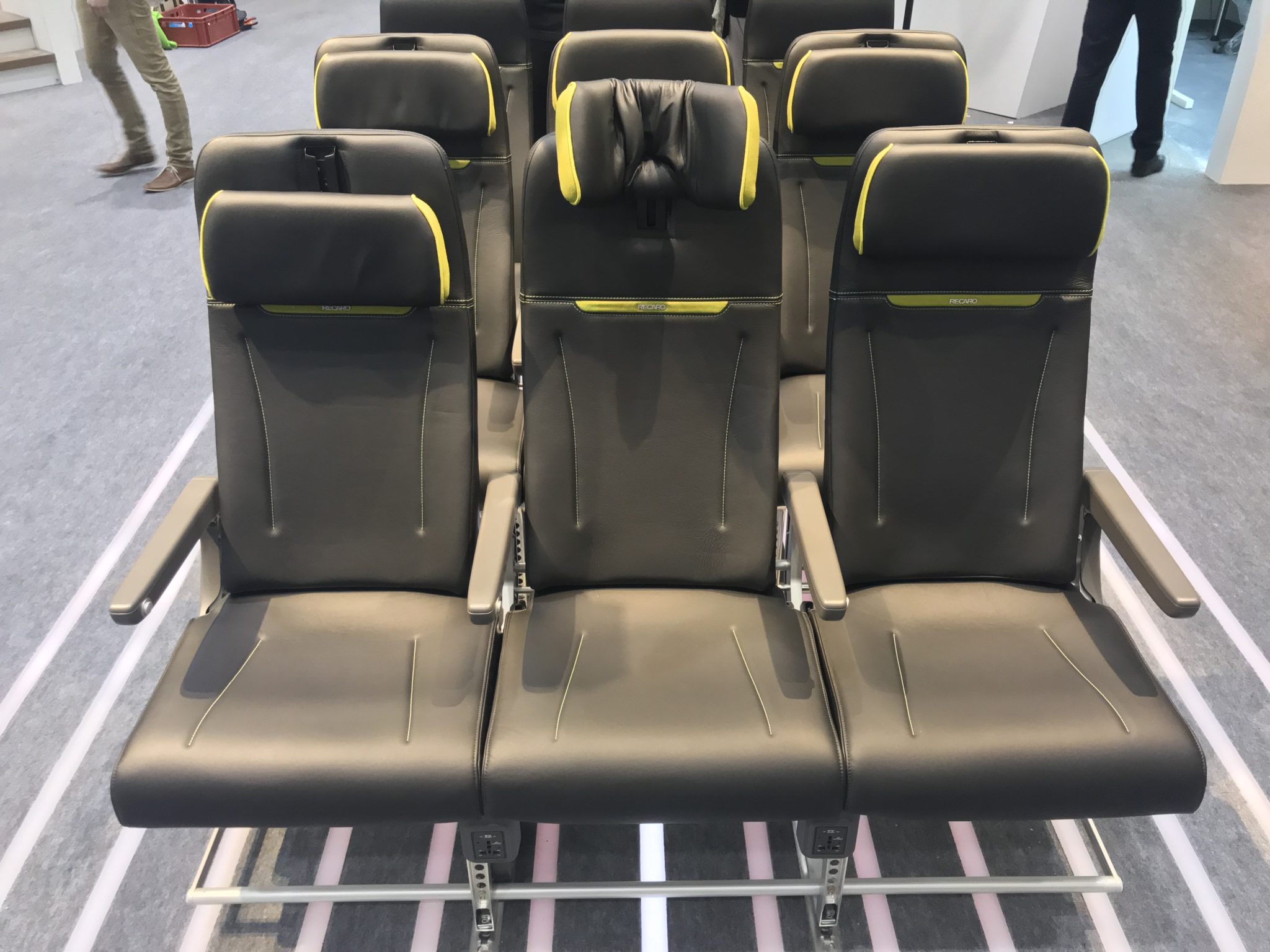 Those features include a six-way adjustable headrest, a high literature pocket, a tablet holder that includes a cupholder, an additional mesh pocket for a phone/tablet, integrated USB power supplies, and a separate cupholder. 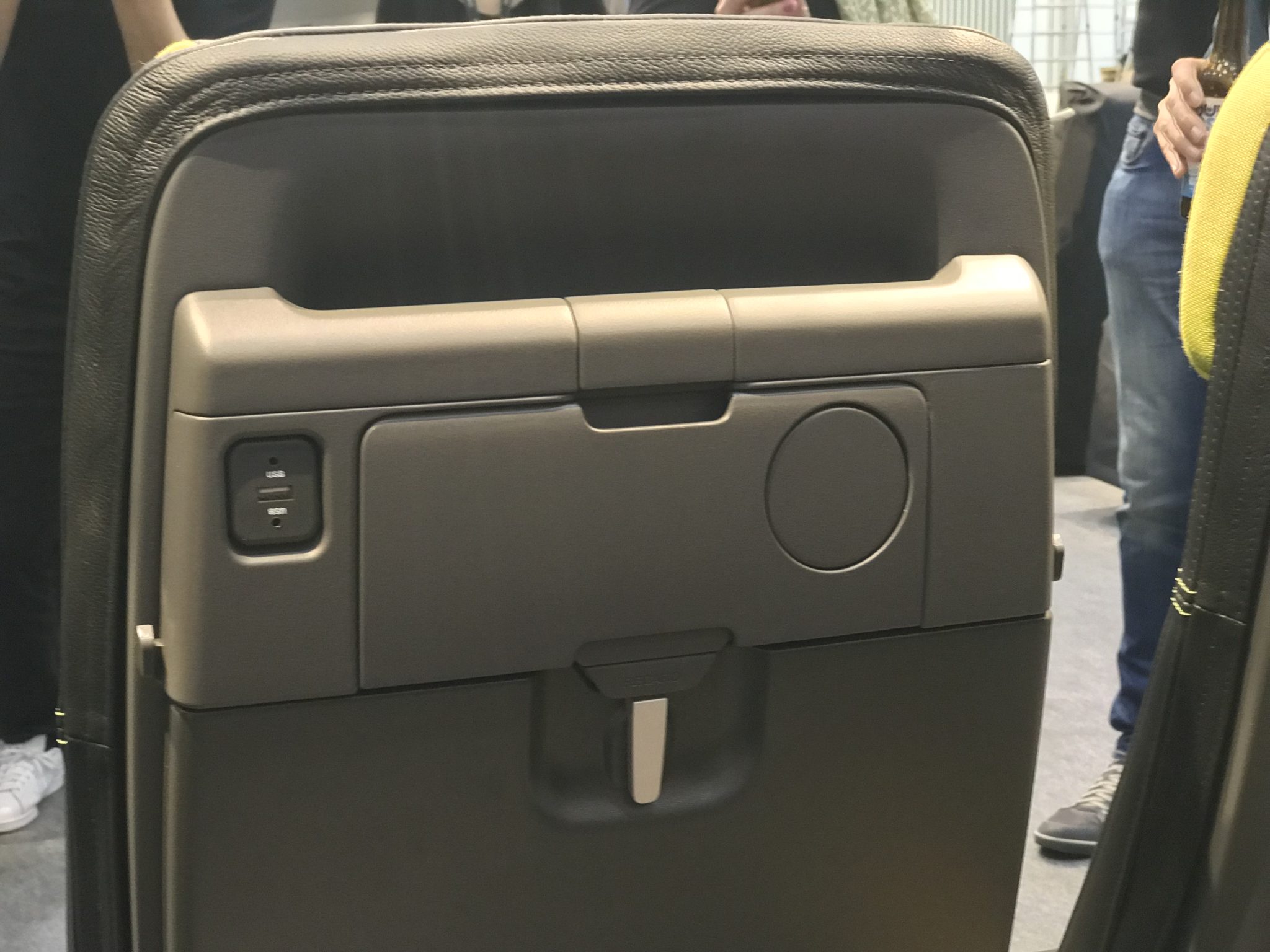 The back of the BL3710 is customisable, including with power and a tablet holder-cup holder combo. Image: John Walton