After flying within Europe no fewer than nineteen times in 2017 and three times already this year, I’ve been reflecting on how premium travel within the continent is evolving, especially as the middle-seat-free Eurobusiness product continues to shrink in seat pitch, removing one of the key reasons that passengers select the upgraded product.

To me, the success or otherwise of an airline’s Eurobusiness revolves around three things: the airport experience, the seat, and the food. Since only two of my flights were on widebodies — London to Paris on an Air France 787, and Helsinki to London on an A350, both of which routes also see A320 family aircraft operating — the narrowbody seat experience was what mattered.

Most of the narrowbody flights were on Airbus A320 family aircraft, with one Swiss “jumbolino” Avro RJ (now retired) and two Embraer E-190s. Notably, the Avro’s 2-3 configuration and the Embraers’ 2-2 were, overall, a better experience than the 3-3 Airbuses, although that wasn’t necessarily the case with Finnair’s Norra-operated Embraer, where adjacent seats weren’t blocked off.

Tonight's #thatjohnonLX seat to Zürich. #bulkheadboy tonight, and only one row of business class on this Avro! #PaxEx pic.twitter.com/sbcbILvPrZ

Two of the flights were on low-cost carriers, in Eurowings’ Best and Vueling’s Excellence seats, which approximate the Eurobusiness experience. I found that the LCCs were great value for money, exceeded my expectations, and even beat the passenger experience on some of the legacy airlines.

My flights reinforced my personal opinion that a proper pre-reclined slimline seat at an inch less pitch is better overall than a previous-generation seat pitched too closely for comfort. Lufthansa’s and Eurowings’ Recaro slimlines were the most spacious, although they were also pitched more generously up front.

Today, #thatjohnonEW is in the Best seats on Eurowings. Recaro NEK, but bags of pitch and great shin clearance! #PaxEx pic.twitter.com/HOkthon4Q7

At numerous points during my travels I would have given my kingdom for a real slimline over what the various airlines were offering, especially when BA’s 30” Pinnacle seats were jammed backwards into my knees by an oblivious passenger in front.

I cannot say enough how much better a 32" Lufthansa NEK is than a 30" BA Pinnacle. #thatjohnonLH #PaxEx pic.twitter.com/K4i8FYfyvb

With so few carriers offering either inflight connectivity or at-seat power, these increasingly crucial aspects of the passenger experience have yet to meaningfully make their mark in Europe. But as early rollouts continue, cabin refits take place, more A320neos and 737 MAXes arrive, and new connectivity systems are installed this year, passengers will grow to expect them, and airlines will need to figure out how they explain to passengers where and when they are available.

But back to the present, where a growing problem with the Eurobusiness experience is at the airport. Airlines are, on the whole, not managing their outsourced third party ground handling partners adequately. Non-hub airlines rely on these companies to deliver their passenger experience at two ends of the journey, while hub-based airlines rely on them for an increasing number of flights.

From the business class traveller perspective — and, let’s remember, a significant number of people flying internally in Europe in business class are lucrative connecting passengers, who generally have a wide choice of airlines including PaxEx-positive Asian airlines and the increasingly aspirational US carriers — the experience is markedly worse when these third party handlers are involved. 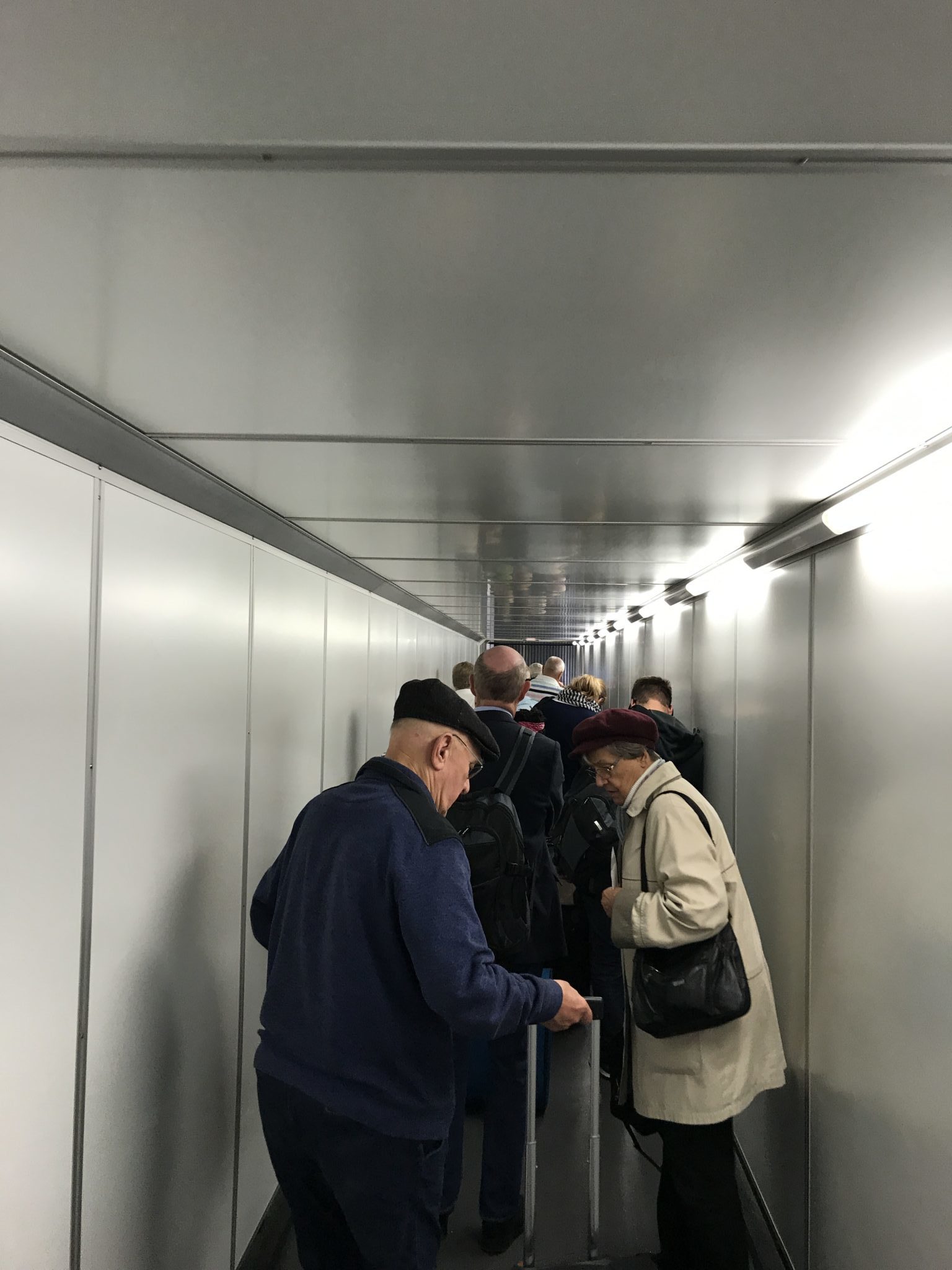 There were very few examples of when I considered third party ground handling contractors to have done even an adequate job delivering the airline’s promises.

Lufthansa and British Airways particularly disappointed, and no amount of feedback from previous flights seemed to result in changes.

Running through the gaps in the experience: the airlines both fail to provide information about when checkin opens, and have not negotiated a long enough window, so passengers inevitably end up starting to queue before desks are open. Often, cut-off times are not published or not adhered to. Priority checkin lines are not provided, or are not marked before the desks open, leading to an unpleasant scrum as passengers are made to shift lines. Staff are reliably indifferent or outright surly, since they are at a degree of separation from the airline they are serving. Fast track either doesn’t exist, isn’t operating or hasn’t been negotiated. Lounges are sub-par, and sometimes nonexistent. Airline apps are not linked with ground handler systems to provide updates to boarding gates and times. Priority boarding does not occur. Priority baggage does not come out first on arrival. It’s all just not good enough.

Across Europe, seat pitch in Eurobusiness has continued to shrink, with per-airline numbers difficult to average owing to variances among subfleets. Lufthansa (and subsidiary Eurowings) offered the most spacious seats during my travels, with 32” of pitch, the wider A320 seats, and the space-saving Recaro product that Lufthansa launched. 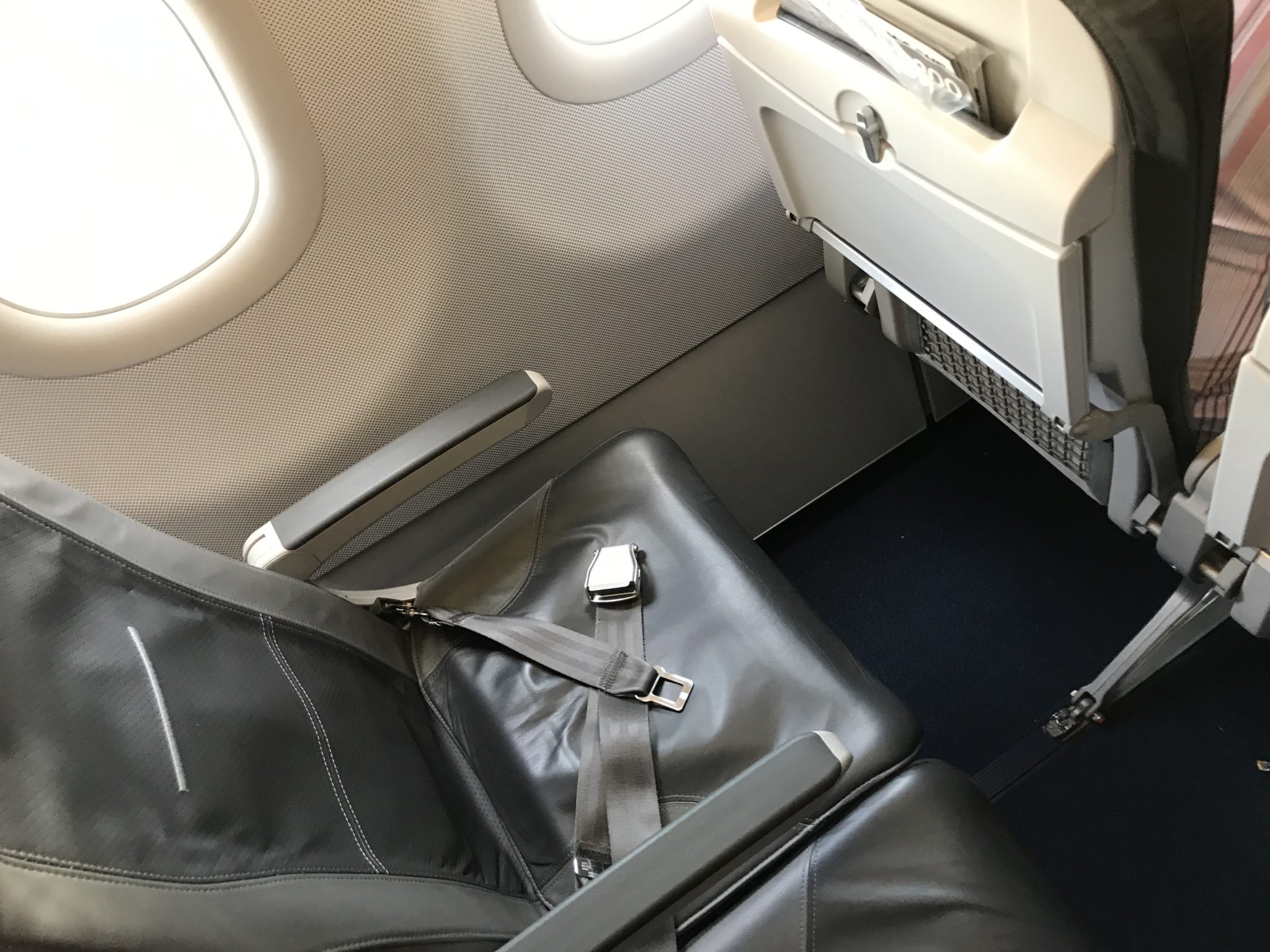 I remain a fan of the Lufthansa-launched Recaro slimline, at least on the A320 cross-section. Image: John Walton

Both British Airways and Air France remained uncomfortably tight at the knee, but regional airlines operating for Swiss and Finnair provided a reasonable amount of pitch.

Food varies widely in Eurobusiness, which is an increasing source of frustration for passengers. Several times I have observed fellow travellers reacting with surprise not to be served a fuller meal, particularly those connecting to or from a longhaul flight, with seatmates often muttering that they’d have brought something with them if they’d have known.

On the LCC side, the “first and free choice from the buy-on-board menu” works exceedingly well, and in many cases better than the airlines offering a separate Eurobusiness menu.

Given the range of food allergies, intolerances, preferences and lifestyles of our modern times, I’m coming to the conclusion that improving buy-on-board quality and nixing the business menu is an optimal strategy for Eurobusiness.

That’s especially true as an increasing number of airlines cheap out on the catering they continue to brand as luxury but which would embarrass a 1980s train station café. British Airways’ is an ongoing disgrace to a once-proud airline, with one bright spark at the end of the year not outweighing a half-dozen dismal or mediocre experiences. I’m happy to hear that there’s a rethink under way, and would welcome the answer being a free choice from the buy-on-board menu. 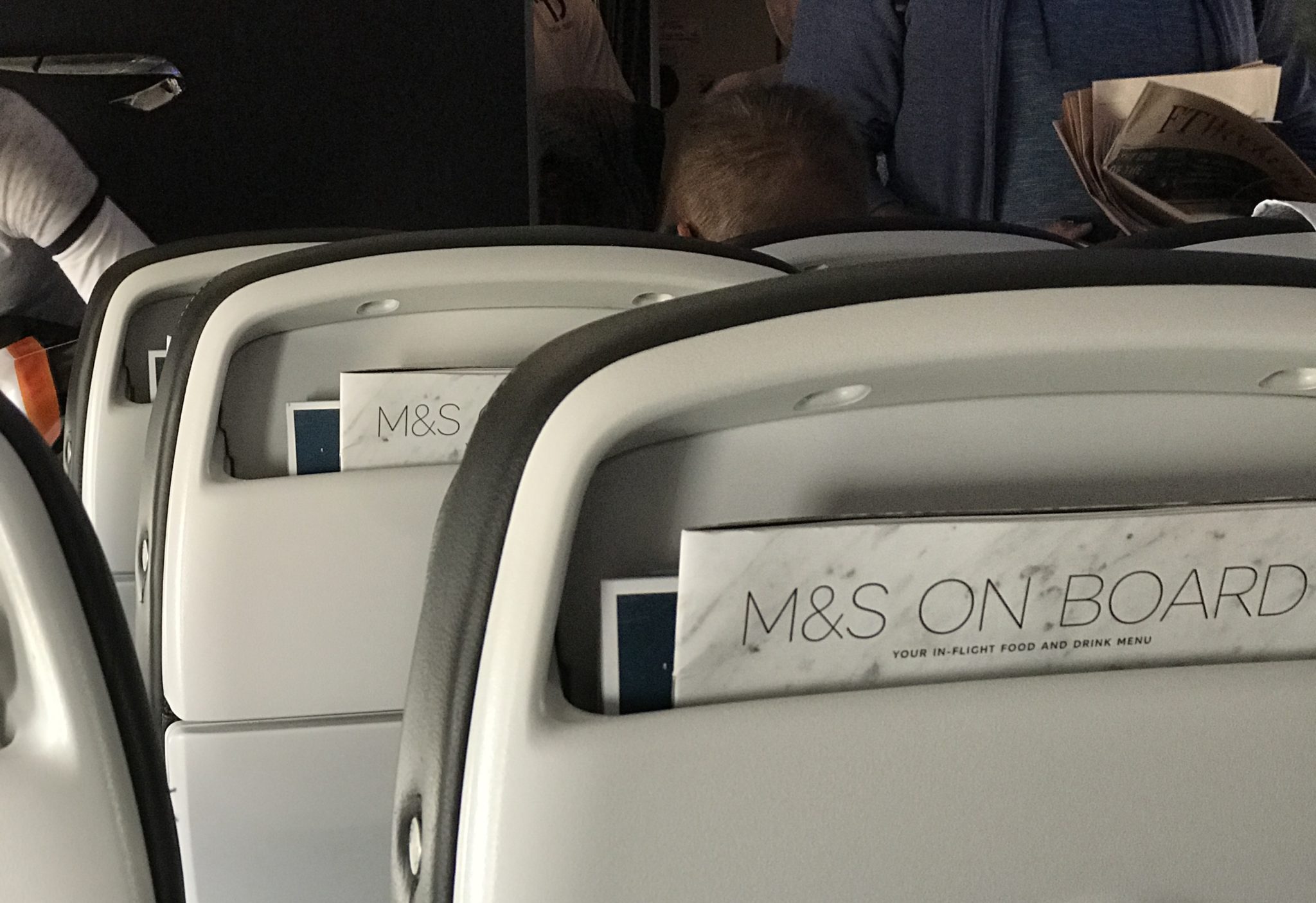 The frustrating thing about BA’s shorthaul catering is that the two buy-on-board M&S sandwiches I’ve been forced to buy when Club Europe ran out of edible food were very tasty. Image: John Walton

On the ultra-short hop between Paris and London, Air France’s chilled plate mixing savoury and sweet options worked well, while Lufthansa’s catering Birmingham-Frankfurt was also decent in a pre-Oktoberfest and very German kind of way. 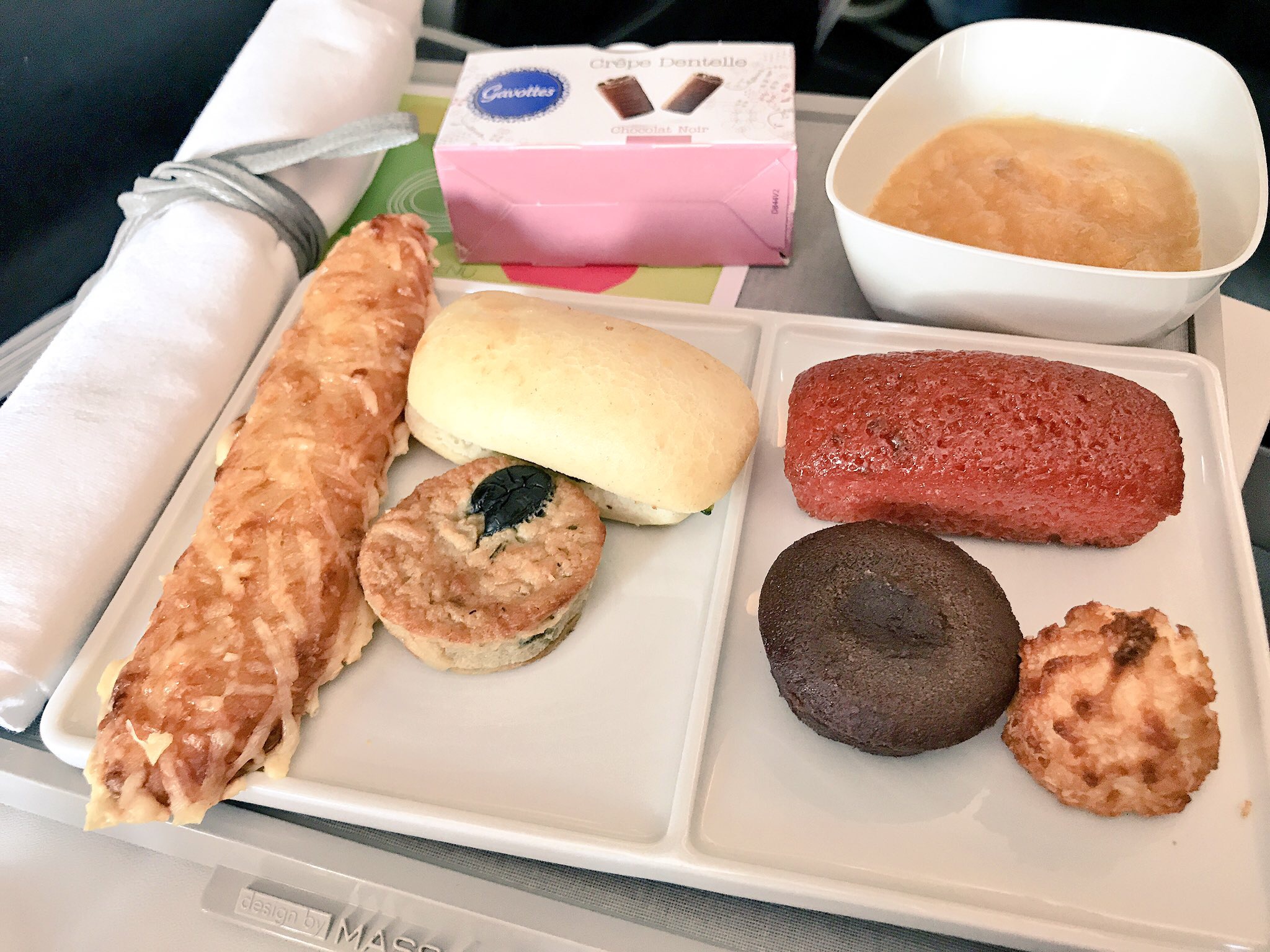 The “throw lots of carbs at them” solution works fine for Air France on the short London-Paris leg. Image: John Walton

Both Finnair and Swiss provided above-average catering on the regional carriers operating my flights, and are worthy of praise for a dash of national flair, from the chocolates to the starters and main dishes. Extra points for the local chocolate: Fazer from Finnair and Frey from Swiss.

Would you like some cheese with your cheese? 💯🇨🇭 for amateurs de fromage. #thatjohnonLX #PaxEx pic.twitter.com/gocT6gdSni

Special mention to Finnair for continuing to use the beautiful Ultima Thule glasses designed for the airline by Iittala glassmaker Tapio Wirkkala in the 1960s even in Eurobusiness, which is an elegant signature touch.

But in a change to last year that should probably concern legacy carriers that want to sell paid tickets for Eurobusiness, as I plan my 2018 travels I find myself consistently choosing low-cost carriers’ best option over the legacies where I can.

The price is often half of legacy business and competitive with legacy economy, and although some ground-handling frills aren’t offered by LCCs the legacies aren’t excelling at the ground aspect of the experience either. It feels like we’re at a pivotal time for premium travel within Europe. The legacy carriers need to seize the #PaxEx with both hands. 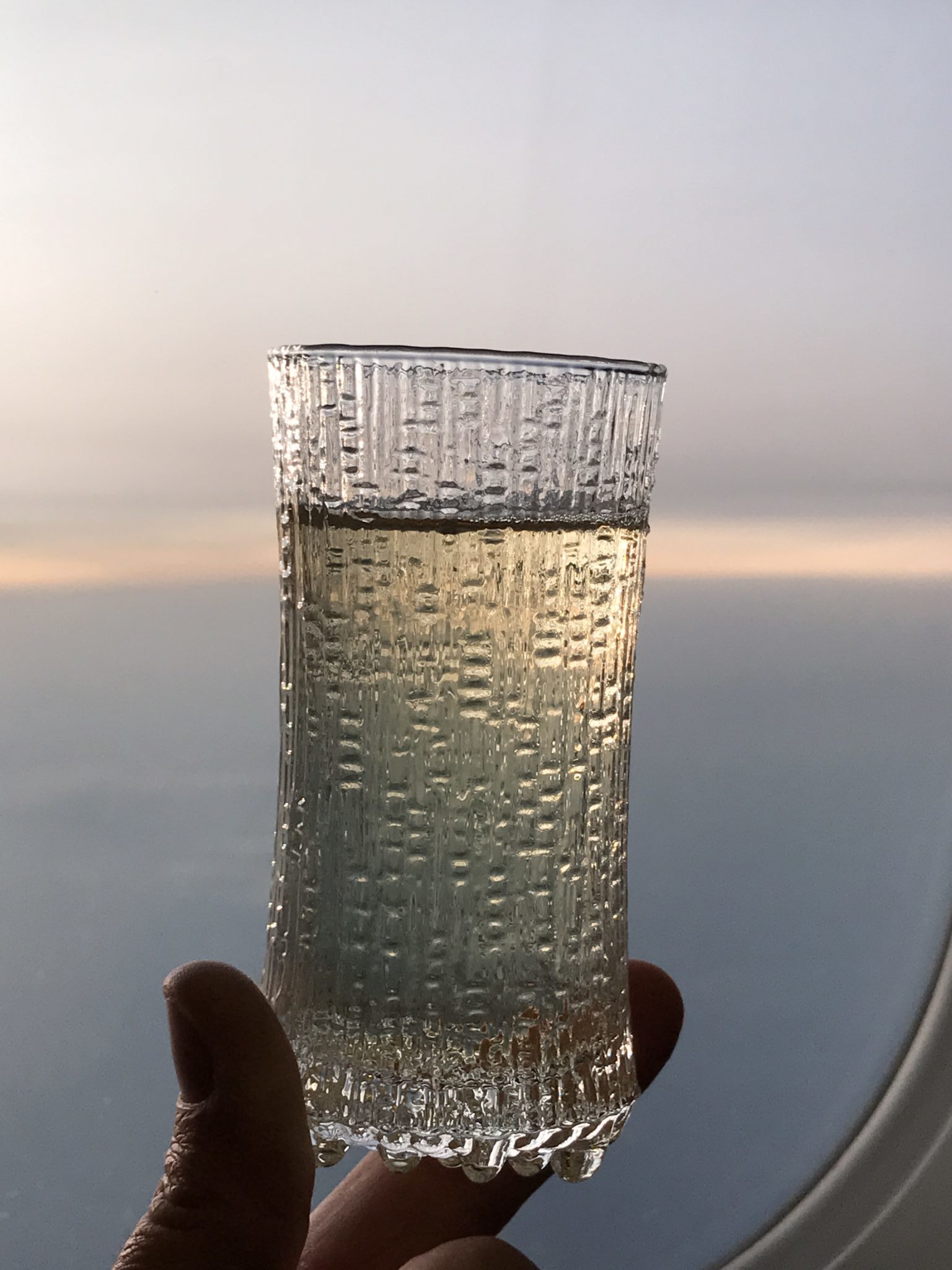 John Walton was a guest of Finnair, and paid for all other flights with money or miles.