The past several years have not seen universal success for seatmakers cutting the bleeding edge where design, materials engineering, passenger experience, safety, production and over-commitment meet.

Zodiac Aerospace’s production issues, which are evident across various projects — including Cathay Pacific’s A350 Cirrus seats, the United Airlines Polaris seat based on the Optima platform, and American Airlines’ ill-fated Concept D — is perhaps the clearest demonstration of the complexity involved.

But B/E Aerospace, now Rockwell Collins Interior Systems, has shown it as well, notably with its Super Diamond delays to Virgin Australia’s The Business product. And quiet discussions continue to circulate about overcommitment and underperformance by other seatmakers in the industry.

Even after certification, to paraphrase the Prussian field marshal von Moltke, no #PaxEx plan survives contact with the passenger. Yes, it helps if designers, seatmakers and airlines work together iteratively to stress-test and focus-group a seat, but the real world often throws up surprises.

That’s why many airlines prefer to be a second, third or subsequent customer of a seating product rather than debuting it. Think back to Cathay Pacific’s 2010 unveiling of its JPA-designed Cirrus, a tour de force of post-introduction improvements on the 2008 US Airways version of the same product.

On a recent flight in that separate mini-cabin, on A330-300 HL-8025, an aircraft delivered in 2015 with the previous generation of seats and refitted since, a truly shocking amount of wear and tear was clearly evident on the first class seats.

This is particularly surprising given that Apex is not a new seat, and lessons should have been learned about its robustness, particularly around high-contact points. Indeed, this journalist toured the Tokyo Bay workshop where Japan Airlines had its seating mockups for the Boeing 777-300ER debut of the seat all the way back in 2012, so the seatmaker at least has had five years to learn the lessons. Japan Airlines’ version is certainly not showing wear to this extent.

While changes will of course have to have been made to the size of the seat to fit into the narrower Airbus A330 cabin, the extent to which those changes affect the passenger-facing aspects of these largely centre spaces is remarkable.

It is particularly befuddling that Korean Air and the seatmaker did not manage to engineer these high-wear, high-impact points for better survivability in contact with the passenger given the age of the Apex platform.

Diving into the specifics, a major wear area was around the tray table mechanism, which lifts up via a diagonally sliding panel from the dividing wall between seats, with the flat cover surface on top rotating inwards towards the divider. 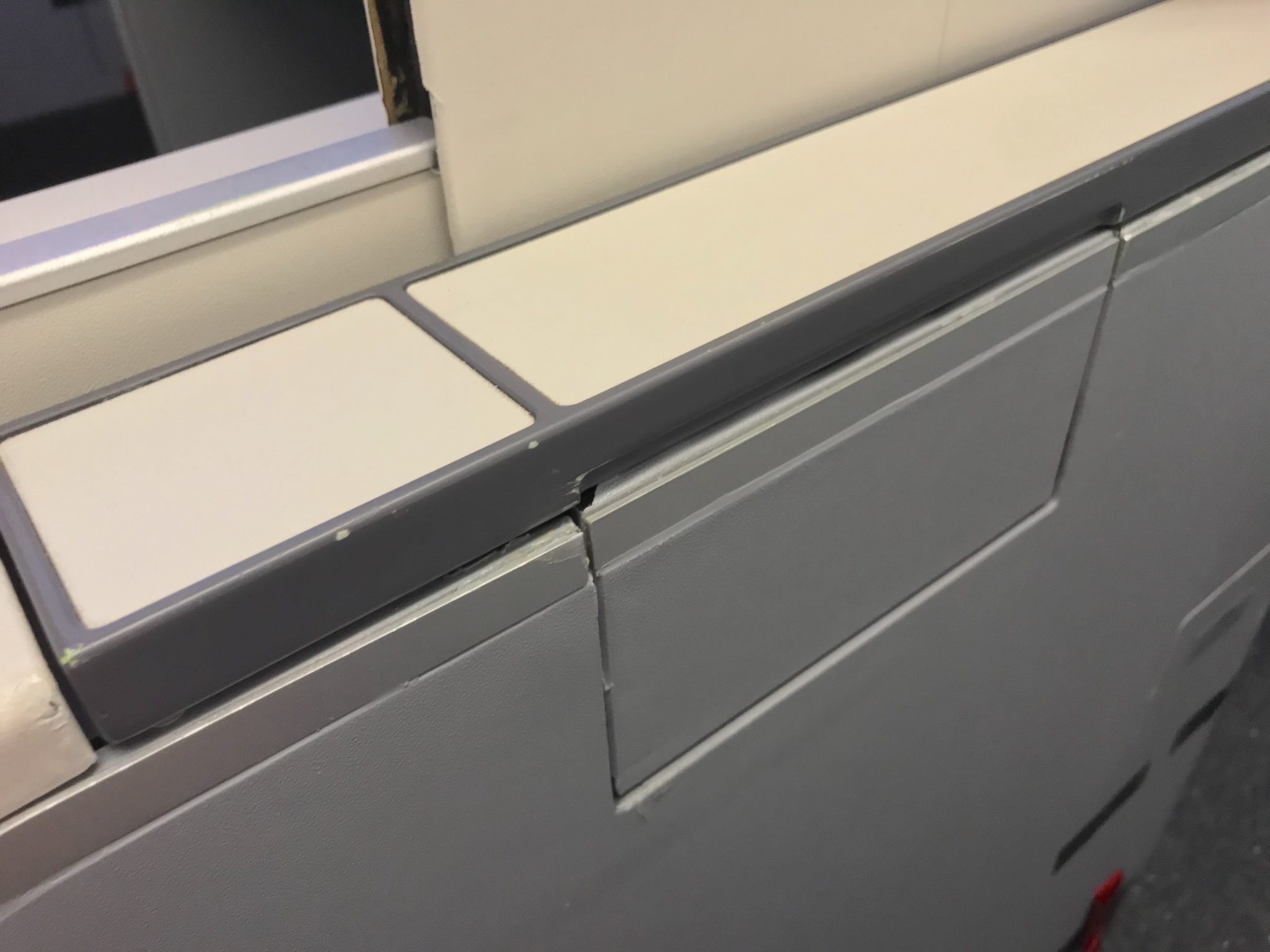 The damage to the table surround appears to have been caused by the mechanism itself. Image: John Walton

In several places, the surface material was visibly chipped and worn, revealing the light green surface below. It is curious that the material used for this high-contact area has not worn better, and that given the amount of visible deterioration it has suffered, that this easily replaceable section has not been swapped out.

The tray table mechanism itself, which took effort and a substantial amount of jiggling to make work, also appears to have damaged the metallic strip and the grey laminate on the outward-facing surface underneath it. 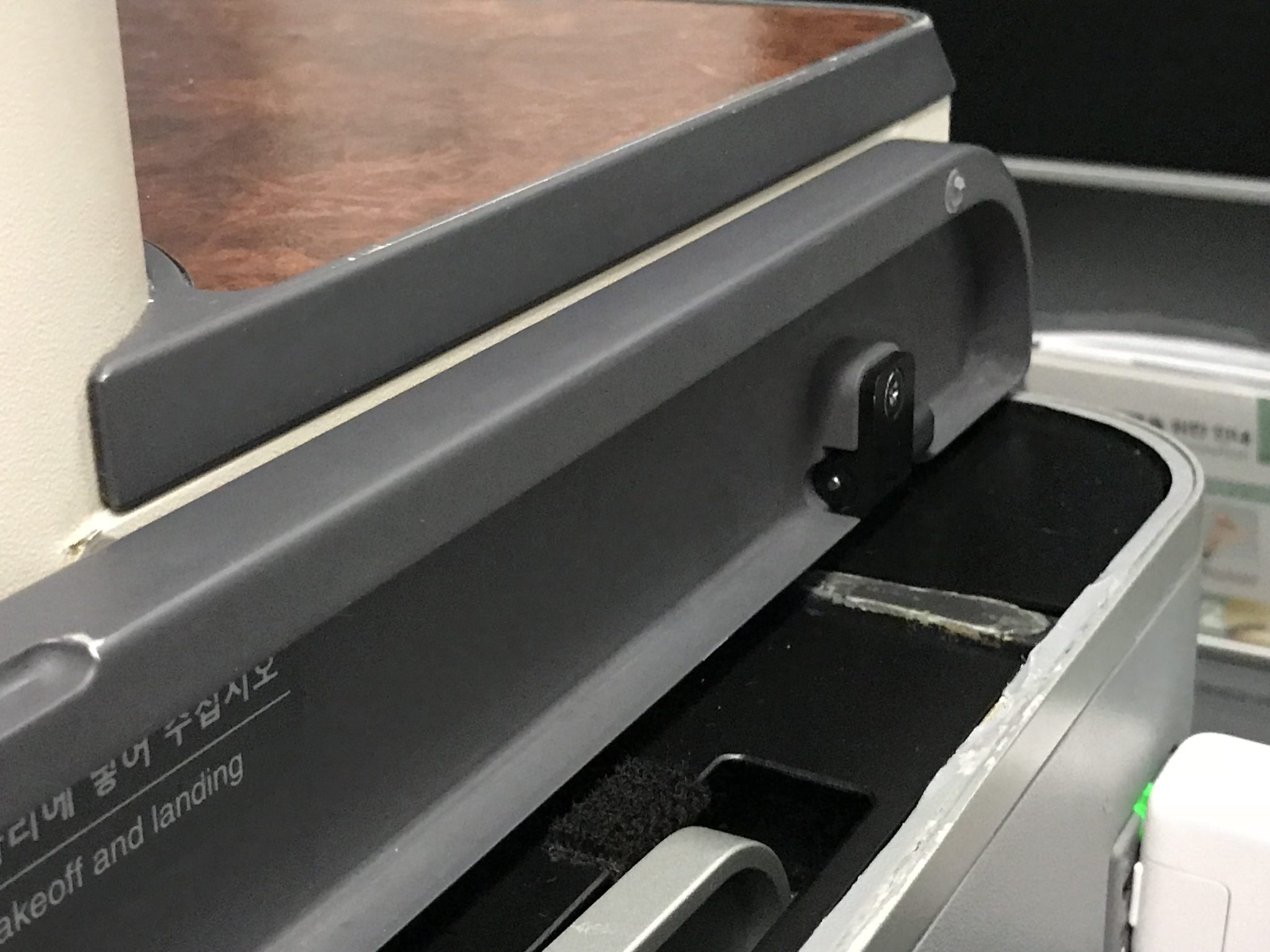 The tray table support itself was notably flimsy, with a lack of support on the other side of the table meaning that a single finger’s pressure was sufficient to make it oscillate vertically by approximately six inches (fifteen cm).

When a laptop was placed on the table, the additional weight magnified the effect, to the extent that typing was actively problematic.

Underneath the flat cover surface when flipped up, it was clear that the metal band at the top of the lower grey surface was delaminating from the recess in which it was installed. Damage to the vertical surface was substantial: on the metal band, on the surface it was seemingly installed to protect, and on a perpendicular cross-brace.

At various points, a caulking-like substance was present, though intermittently: it had either worn away from a substantial part of the areas where it was applied, or it had been added incompletely as part of attempted repairs. 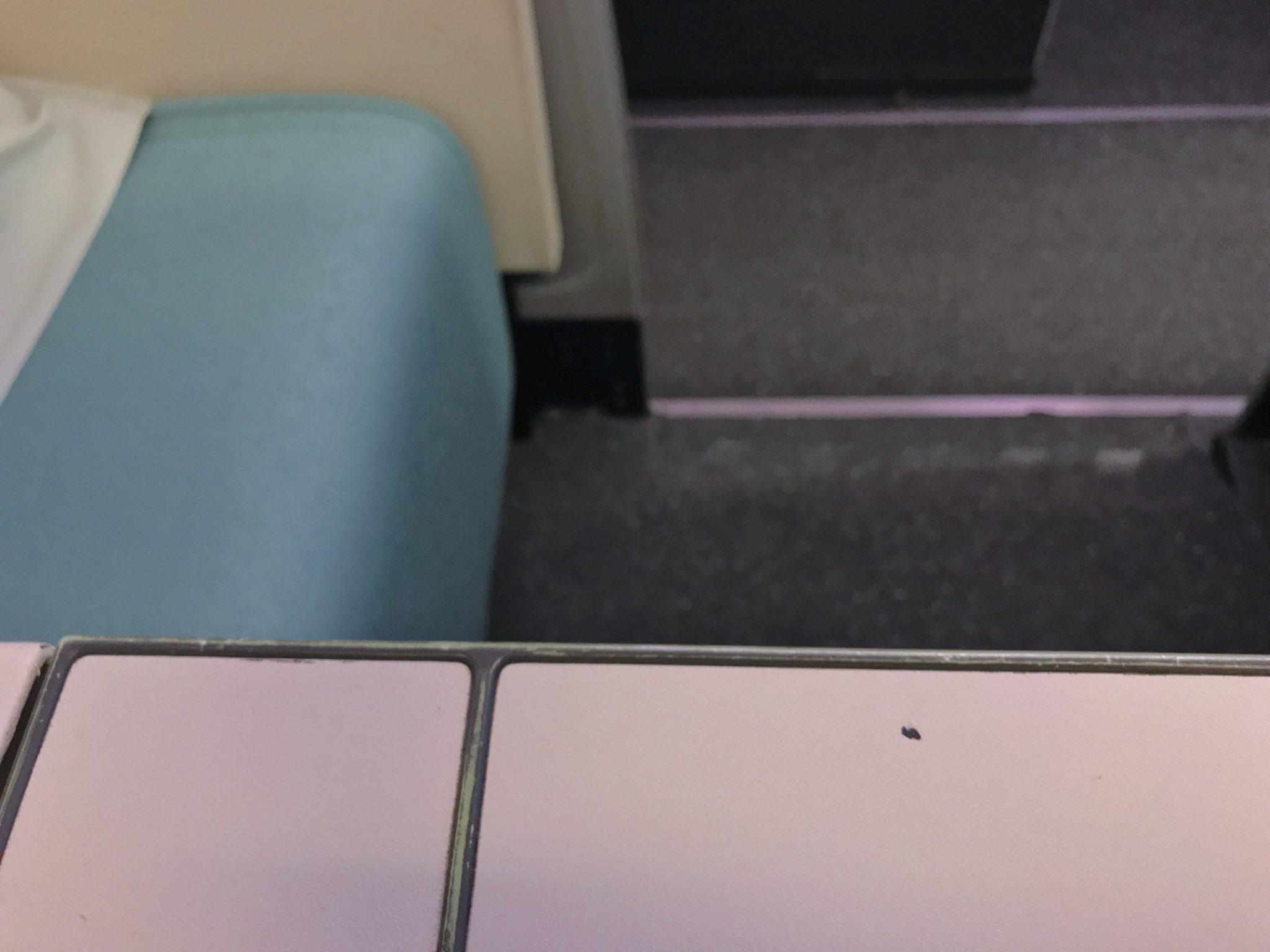 Passenger-facing surfaces on the neighbouring seat were in similar, if not worse, condition. Image: John Walton

Numerous other points of the seat showed wear, especially high-contact areas like the recess for the seat controls and the wood effect cocktail console. 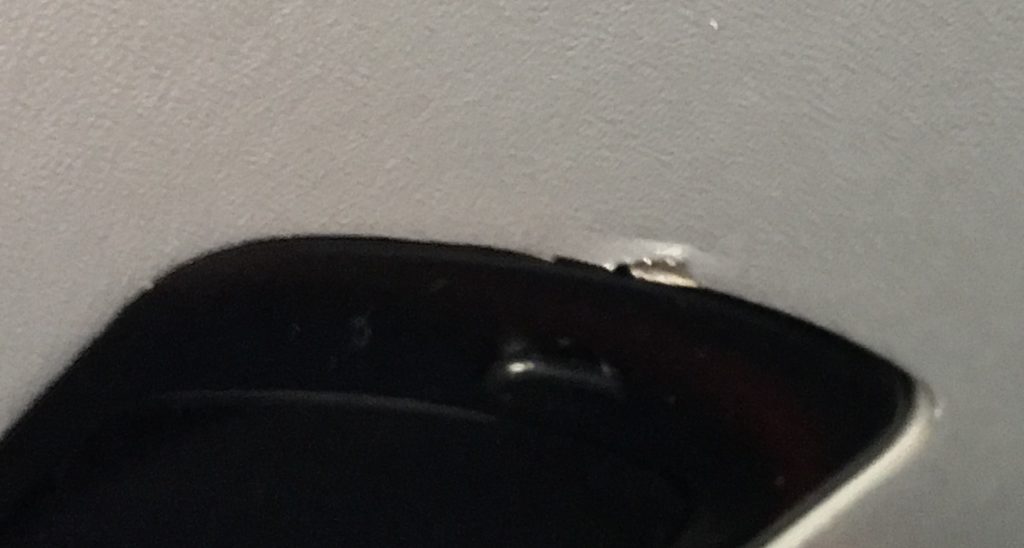 One hopes that the evident damage to the life vest compartment inside the divider unit is the result of being pried off for regular checks to verify that the life vest itself is still present, rather than as the result of tampering. The wear does not give passengers a huge amount of confidence in any case. But even if the wear is the result of the former rather than the latter, it is disquieting that this regulator-mandated part of the seat was not constructed with a latch, handle, break-point or some other opening method that does not cause damage to this extent. 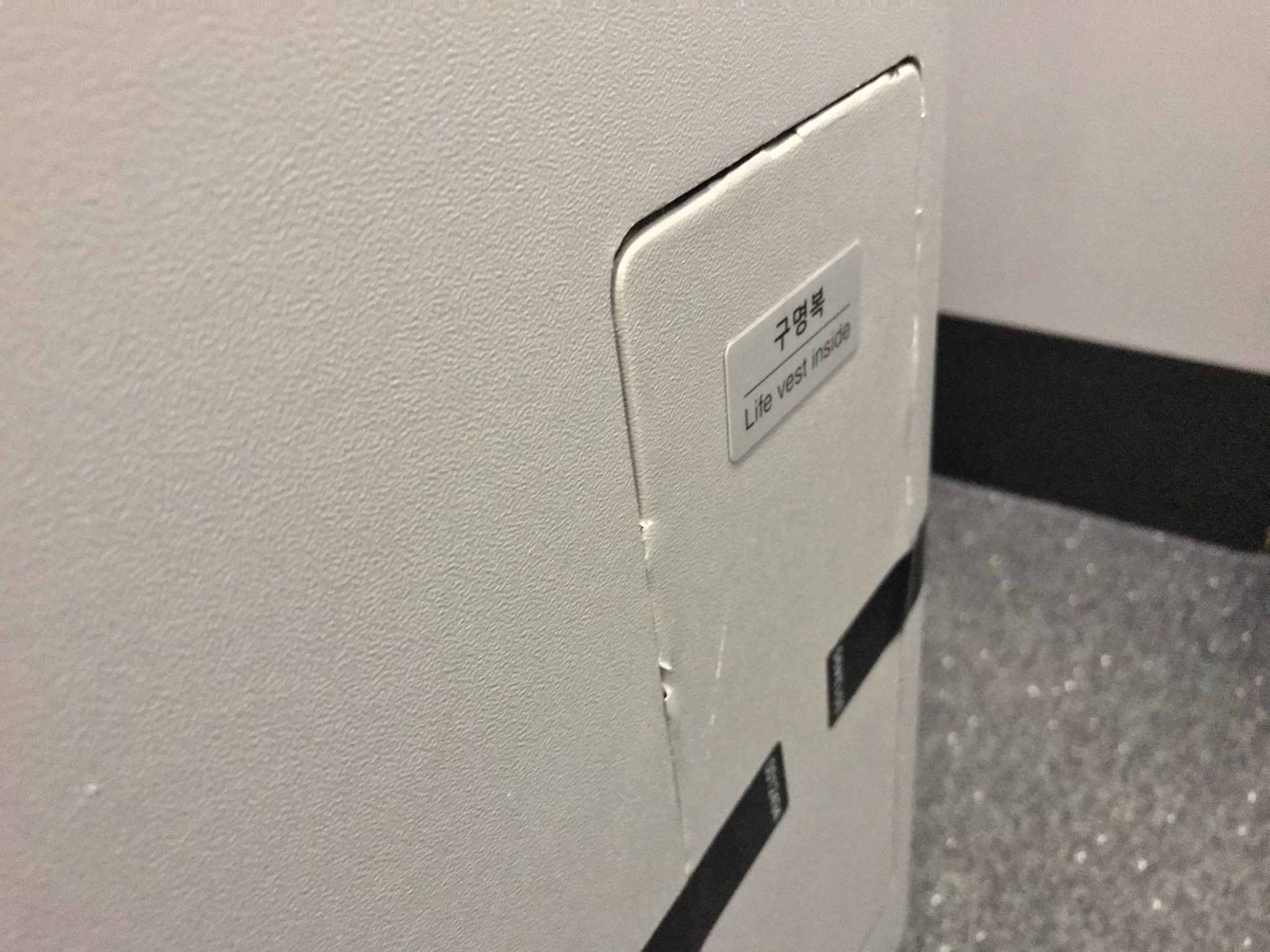 The amount of damage to the life vest compartment was quite shocking. Image: John Walton

It seems almost unthinkable that this level of damage could be allowed by the airline and its maintenance processes, or indeed that a newly installed first class seat from a seatmaker with Rockwell Collins’ pedigree could so quickly reach this state under the pressure of real-world use.

RGN asked several questions of both Korean Air and Rockwell Collins about the design, installation, fitout, level of wear, suppliers, maintenance, and improvement plans for the seats.

Korean Air did not respond to multiple requests for comment from Runway Girl Network. Rockwell Collins stated only: “We won’t be going into details about how our seats are produced and installed. However, we work closely with our customers to address any issues that may arise as a result of passenger use.”

Scare up a slice of horror with Annabelle: Creation