Ten years after first class suites appeared on Singapore Airlines’ Airbus A380 aircraft, the airline seems set to wow the passenger experience world with a new full-room suite for its first class passengers. The suite features a bed arranged perpendicular to the centreline of the aircraft, with the head by the window, and a separate armchair for seated travel, if mockup images published on two separate messageboards are accurate.

Singapore Airlines is to unveil the new products on 2 November in Singapore, and five separate images on both the FlyerTalk and SQTalk boards show an Etihad Apartments-style configuration, although it is unclear at this point whether the bed converts to a sofa, as in the Etihad example, or whether it is a full-time sleep zone (click through to see the images).

If the bed does not indeed fold up into a couch, then one of the selling points of first class — the option of a convivial moment or two — will be lost. Image: Singapore Airlines

The armchair part of the suite, meanwhile, is shown in a variety of swivelling positions and must surely lock into place for takeoff and landing. Looking in from the door of the suites, the chair is positioned in front of a pair of storage areas that flank what appears to be a tablet that is likely used to control the various functions of the space. Between the chair and the door, meanwhile, sits an oblong table that looks like it likely contains the meal and work table. 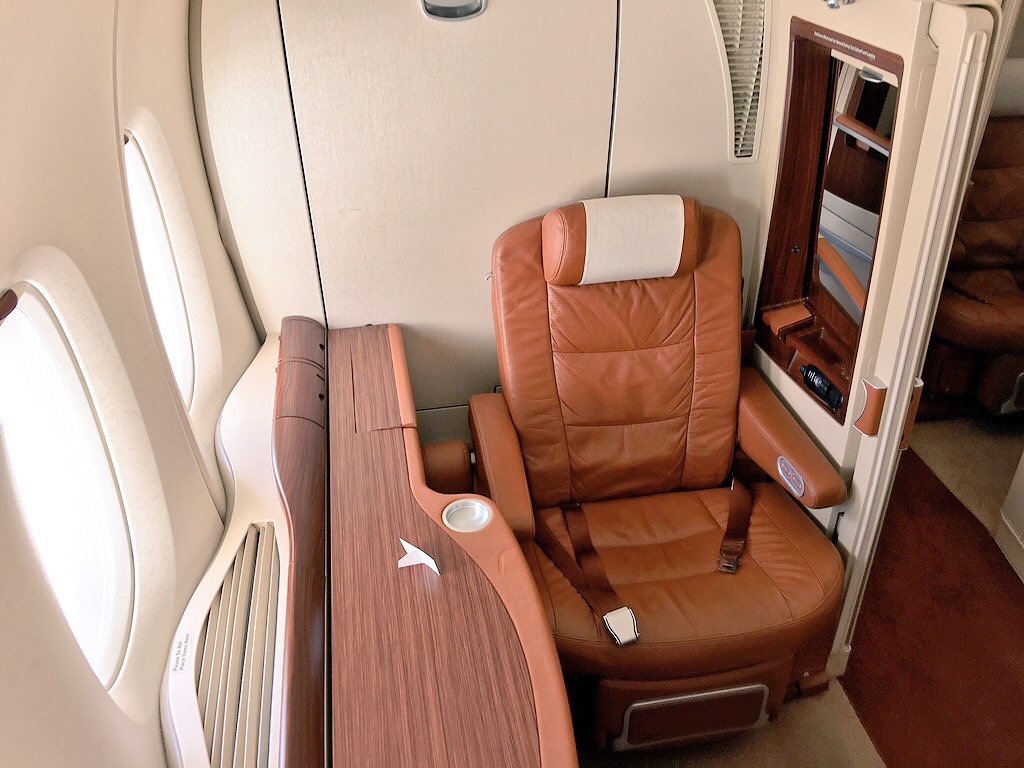 There’ll be more space in the new suites, but will it be better used? Image: John Walton

And, in keeping with Singapore Airlines’ double bed option on the existing A380 Suites product, one of the sidewalls can be removed (dropped, seemingly) to create a double bed. 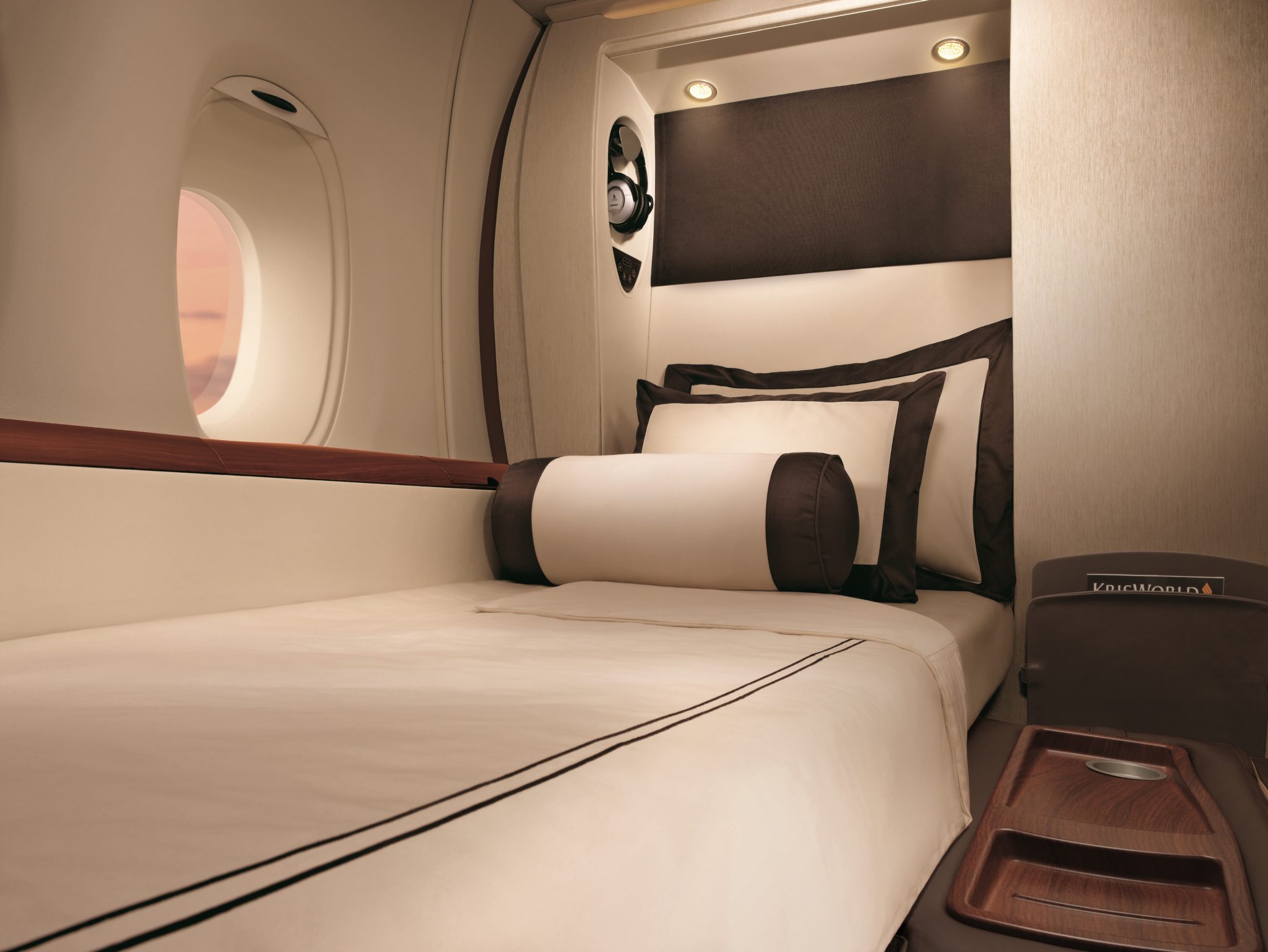 The first-generation suite folds down from the wall like a Murphy bed, and has been criticised for a lack of width. Image: Singapore Airlines

Two inflight entertainment monitors appear to be present, a smaller one on the perpendicular wall, and a larger one at the foot of the bed. A wardrobe seems to fit between the foot of the bed and the aisle, which is useful since the overhead bins appear to have been removed in one of the images, although it isn’t clear whether this is a render or a real-world mockup shot — the proportions are a little askew and the sidewall of the suite is a different shape.

In design terms, the space is very neutral, with the exception of a carpet that feels very much in keeping with the wacky-yet-sedate carpetry in Singapore Changi airport, and a lightly applied floral motif on the suite sidewall. Obviously, it’s hard to make a call on the basis of a few mockups that don’t have all the lighting options of a cabin, but it feels staid and a little pedestrian. Here’s hoping for some innovative light-catching thermoplastics that really make that airline mood lighting pop, because the only current colour is a rectangle of orange from a cushion on the armchair — although finally, some link between the orange in the premium economy seat and the rest of the airline’s product line.

The bed, too, looks a little narrow, which has been one of the repeated criticisms of the Etihad perpendicular suites product in the first class Apartments and, indeed, in the first generation Singapore Suites product itself. If the mockups are correct, this feels like a missed opportunity by the airline. Many will be asking “how is this product different from Etihad”, as well as “how is this better than the original Suites”, and a great answer would have been “the bed is significantly larger”.

Also striking is the fact that for mealtimes, the placement of what looks to be the only meal table is away from the pair of windows. While this is, I suppose, only natural to enable flight attendants to actually serve the meal, one of the highlights of flying first class for many passengers is the chance of a leisurely meal while watching the world go by. It certainly was the last time I flew in Suites. 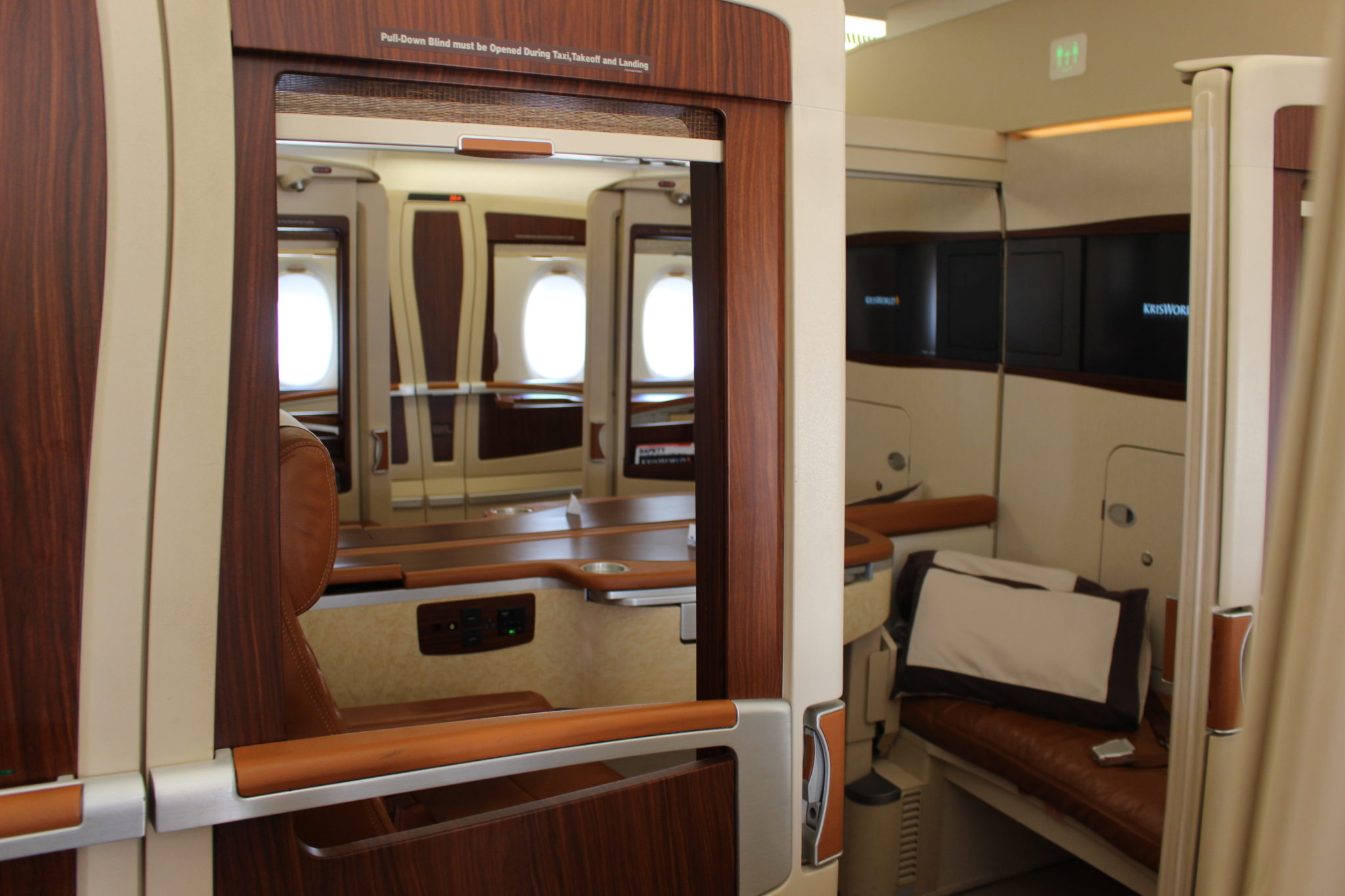