Twenty-eight inch seat pitch is not only manageable, it’s relatively comfortable at knee level even for six-footers: these are words that this journalist never expected to write. And yet, the Geven Essenza barebones slimline seat has somehow managed to do just that. Indeed, at the Aircraft Interiors Expo Americas in Long Beach, Runway Girl Network broke out the measuring tapes to check that what felt like a relatively spacious 31-32” was indeed pitched at under 29”. It was, and even sliding the seats closer together to an ultra-low-cost carrier 28” pitch didn’t make editor Mary Kirby’s knees touch the seat in front.

Essenza is one of the latest generation of robust, ultra-lighteweight slimline seats that seatmakers have been showing (publicly and behind the often non-proverbial curtain) at industry events, and Geven’s Americas sales chief Massimiliano rrrrero tells RGN that the seat will soon be announced as the next-generation narrowbody product for “a major European carrier”. Geven would not, however, be drawn on pitch, although even notional full-service European airlines are already cramming customers in at 28” with last-generation seats.

Essenza already flies on the ATR family of turboprops, and was the product that the airframer and seatmaker used to demonstrate what an 18”-wide ATR seat would look like at the main Aircraft Interiors Expo in Hamburg earlier this year.

The product on show at the Americas expo is currently “a single-aisle seat for the Airbus A320 family. It’s super-lightweight, very low maintenance, with no seat pan,” Guerriero explains, noting that the design that enables Geven to skip the often heavy and bulky seat pan “is one of the best features that we can think of.”

Instead of the seat pan, what is a surprisingly ample seat cushion is sealed to a lightweight structure that attaches to the seat frame via velcro, and can be removed with a single pull.

The entire structure can be lifted by a single finger — remarkably impressive. 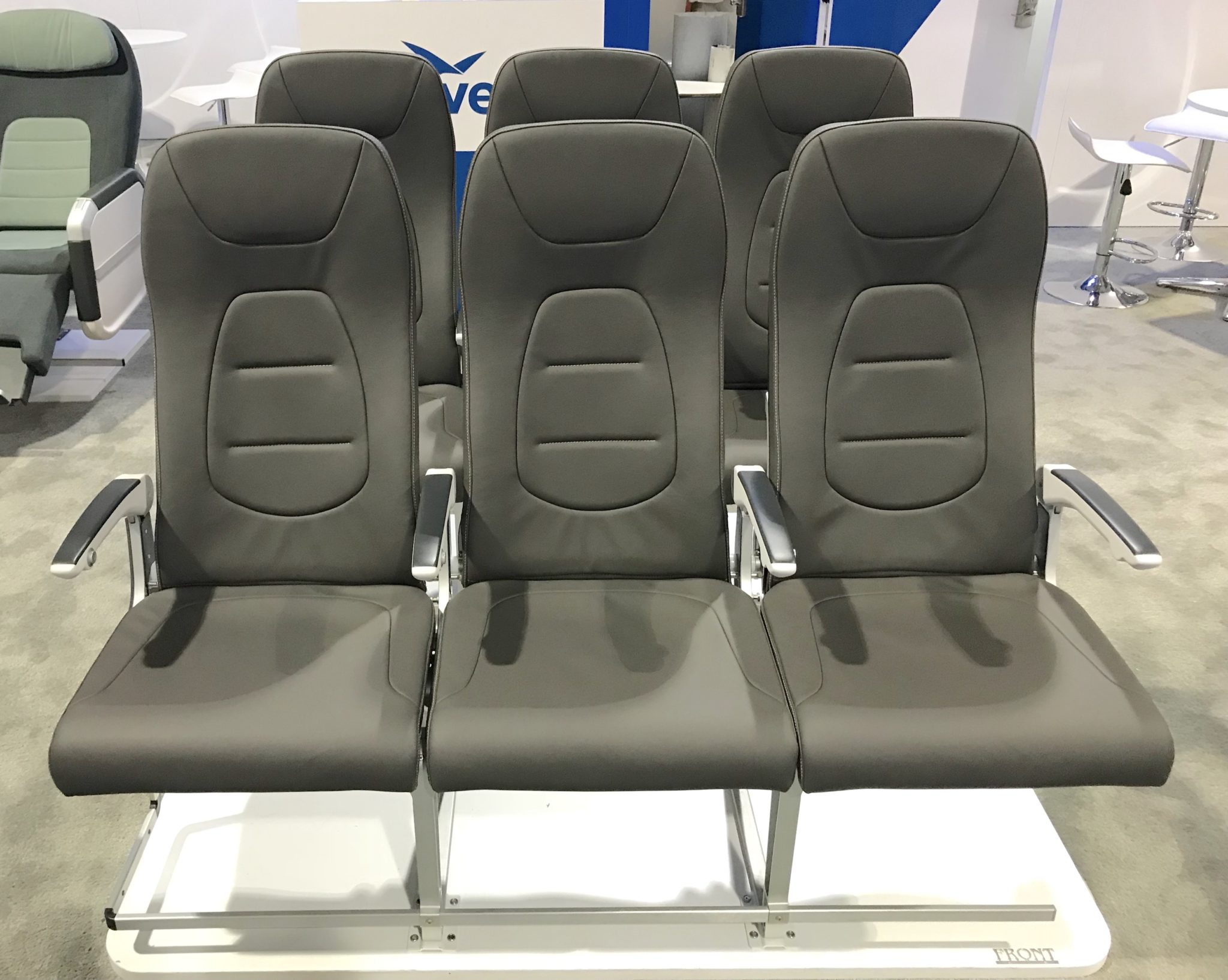 Compared with the competition, Geven’s generous seat cushioning will be a PaxEx plus. Image: John Walton

At knee level, smart design has carved out every possible millimetre for the knees. A gentle curve gives around an inch of extra knee space at the widest part of the seatback, a position which can charitably be described as a semi-manspread, although the side structures will help to restrict the full spread-eagle position. The height of the seat structure also increases shin clearance substantially, which is a major pain point for several of the previous generation of slimline seats. And there’s no pretense of netting below the tray table either: the literature pocket is, like most products without seatback inflight entertainment monitors, installed high on the seat. 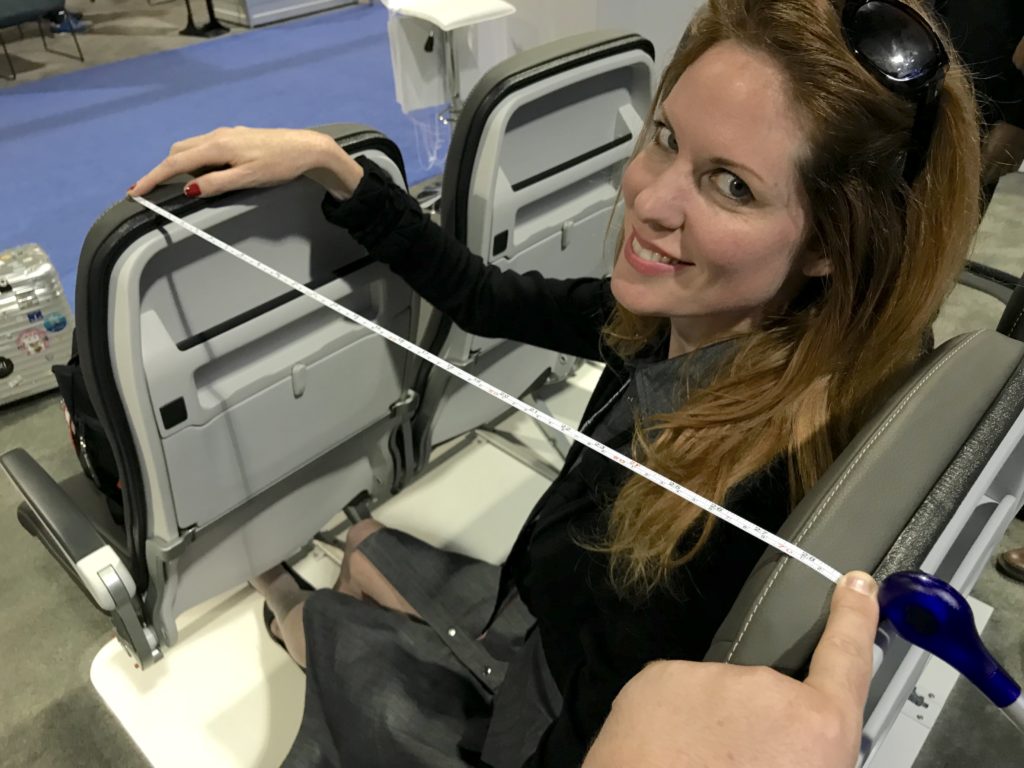 Cracking out the measuring tape, it was astounding how much space Geven has provided at 28″. Image: John Walton

Geven was showing off two seatback options at AIX Americas: one with the standard ATR seat, and one that it highlighted as the model that its “major European carrier” will take, which has a slightly more sculpted and less barebones feel to it. It should also allow for a little bit of homebrew DIY phone or tablet dangling in order to enable passengers to watch their own devices. Interestingly, a tell-tale small black rectangle to the left of the seat just below eye level that suggests that its European customer will be installing USB power on its fleet (see photo at top for an example of a fuller featured version of the seat). 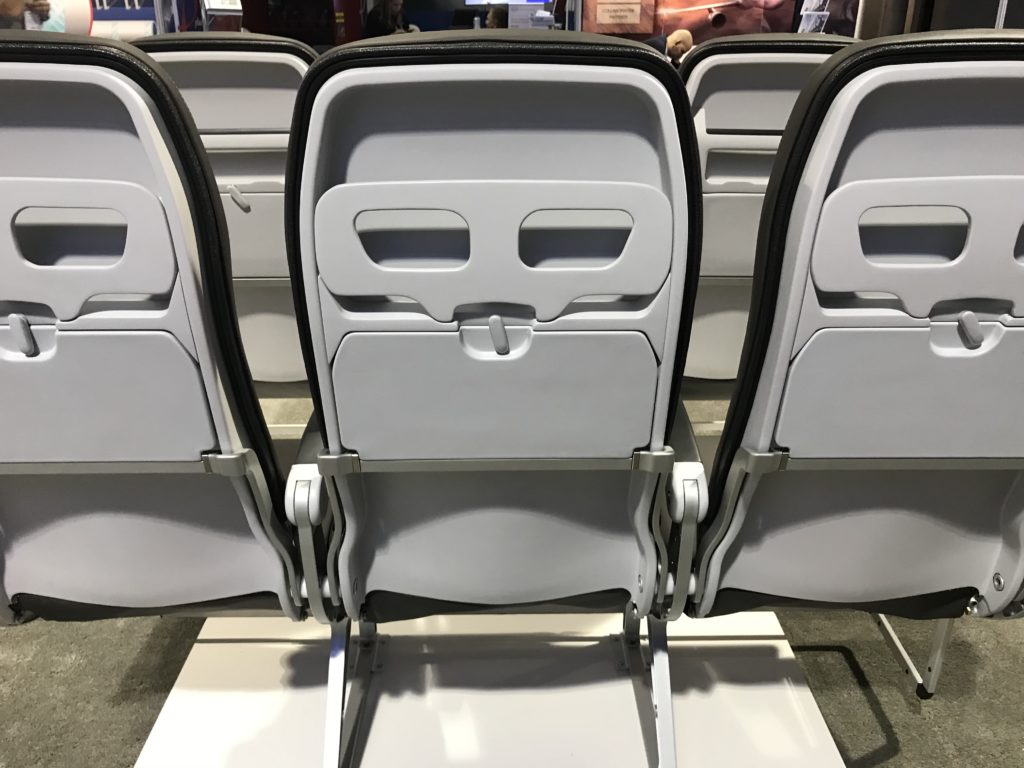 The #PaxEx problem, though, as seatmakers continue to enable airlines to cut pitch without cutting knee clearance, is the eyeball-to-seatback distance. Every inch makes a massive difference to passengers’ perception (and indeed the reality) of space within the cabin, particularly on the increasingly long sectors that previously shorthaul aircraft in the Boeing 737 and Airbus A320 family are operating. And neither Geven nor any other seatmaker has managed to create a product that truly solves that problem — yet.