Hong Kong Airlines, the Chek Lap Kok-based member of the Hainan Airlines family, launched longhaul flights to Auckland in early November, and four weeks later I tried out their cheap business class to see how it was bedding in.

Booking five months out, I paid just over US$950 for the business class ticket from Osaka to Auckland via Hong Kong, which would have cost me $632 in Air New Zealand’s very cramped Dreamliner in Economy, or $1045 in premium economy, nonstop. I figured the chance to spend a couple of days in Hong Kong and the more spacious seating were worth the slight inconvenience.

Checkin at Osaka was efficient and pleasant, with Swissport as the contracted ground handler, although I raised an eyebrow at the large amount of badly spelled English in the ‘what not to pack’ laminated safety cards at checkin. It all felt very low-budget and slapped together.

I sped through the security fast track and headed to the Asuka lounge, which also serves Delta, Lufthansa, MAS, United, Finnair and Cathay Pacific. It was pleasant enough for a short stay, but a lack of amenities and serried ranks of identical chairs felt like an early 2000s United Club rather than a serious international business class lounge. 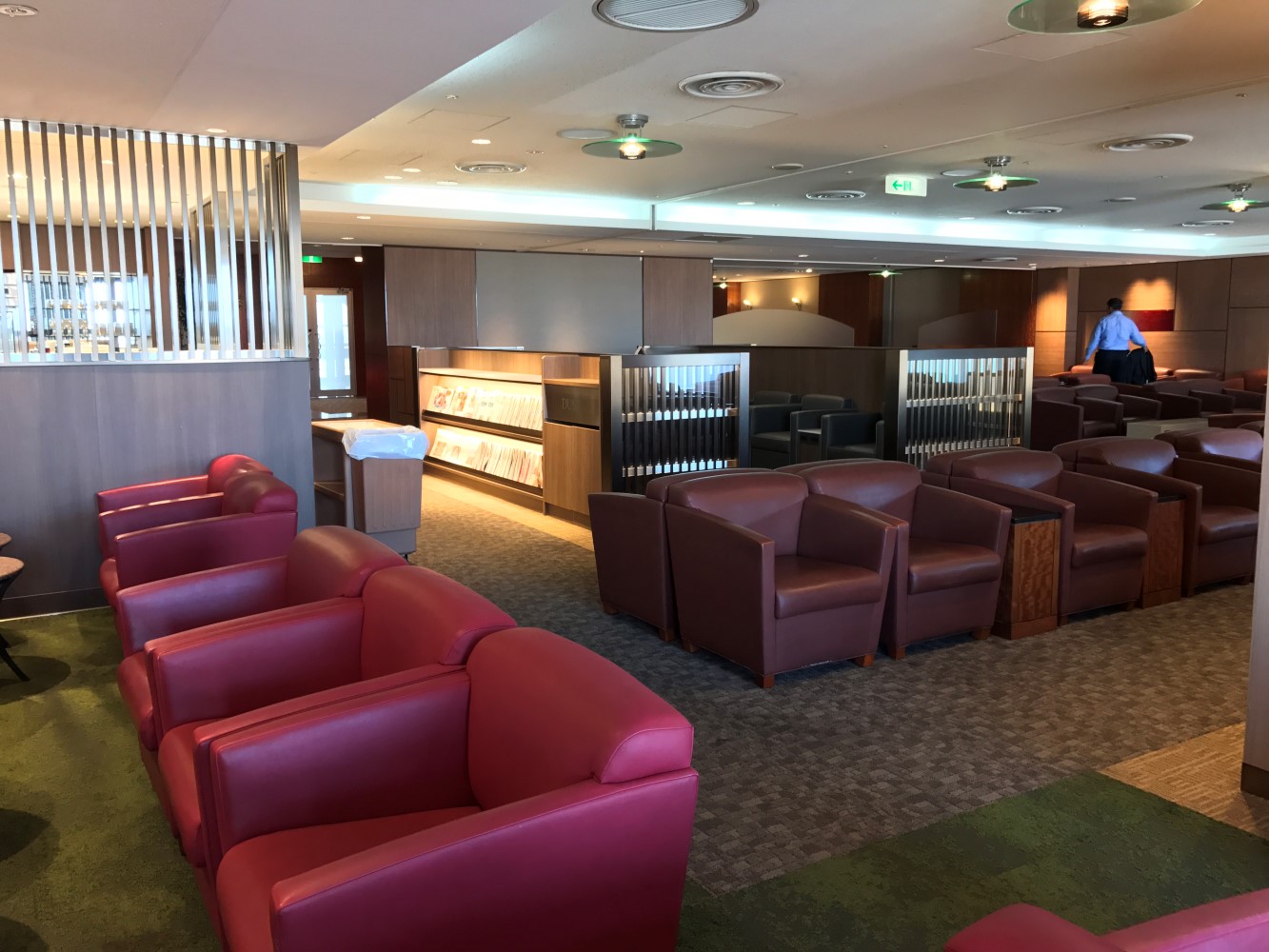 The Asuka lounge in KIX is fine, until it starts getting busy. Image: John Walton

Boarding was an experience. The flight was delayed by over an hour with no notification, and when I left the lounge on time the lounge staffer asked me for my airline but didn’t tell me about the delay. I got to the gate area to find a 100-metre queue in the economy line despite the aircraft not even having arrived yet, and the contract staffers were very vague about any expected departure time. They weren’t making announcements to suggest that the passengers already standing up should probably sit down either. 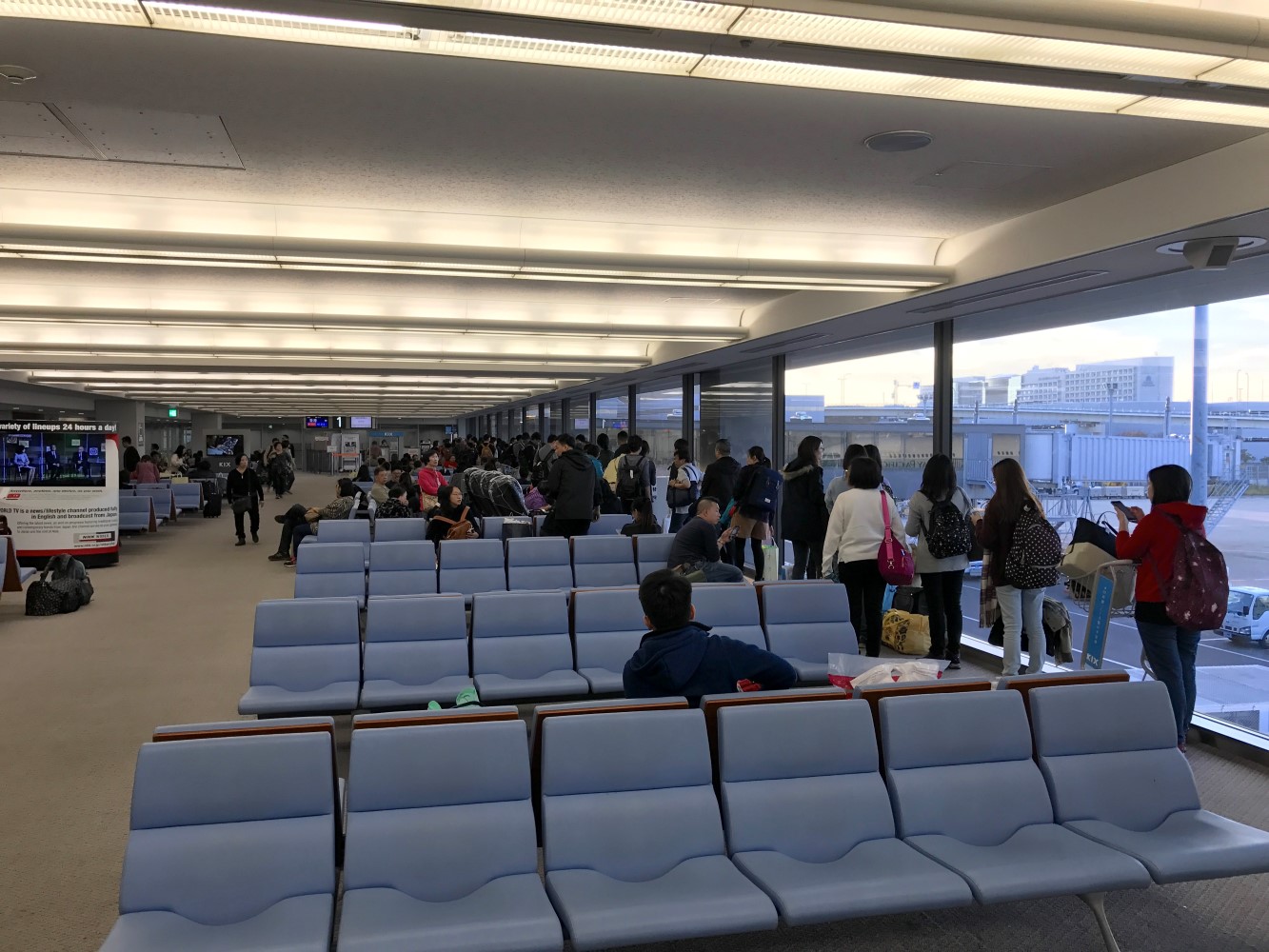 The Swissport staff weren’t managing the huge queue of passengers lining up even before the plane arrived. Image: John Walton

With little confidence that the lounge staff would keep on top of things, I parked myself next to a coffee stand in the main terminal area next to the gate and waited it out.

Finally boarding, I was impressed by the warm welcome from the purple-clad crew, and was directed to my seat, 12K, the first window-window on the starboard side of the aircraft, where I also found big squashy pillows and an upmarket duvet-style blanket.

The seats on this A330-300 for a three-hour flight to Hong Kong were Sogerma (now Stelia) Solstys, one of the earlier and more spacious staggered fully flat beds with direct aisle access. Nothing new, but a strong hard product in a market where Cathay Pacific often operates its 2-3-2 recliner seats and the Japanese competition is usually a recliner. I really liked the bold red patterned bulkhead effect too.

Leafing through the menu and wine list, I was offered a pre-departure beverages — water or juice only, no bubbles and although the Champagne was a tasty and rather unusual category two marque and well chilled by the crew, the airline only loaded two bottles for a cabin of 32 passengers, so it ran out less than an hour into the flight (and, no, I was not the only one drinking it). The other two wines, of a brand and supposed wine region that is so off-label to be ungooglable, were truly terrible, well below the standard of other airlines’ economy wines, let alone premium economy. At least Hong Kong Airlines couldn’t do anything too bad to a bourbon and soda water. 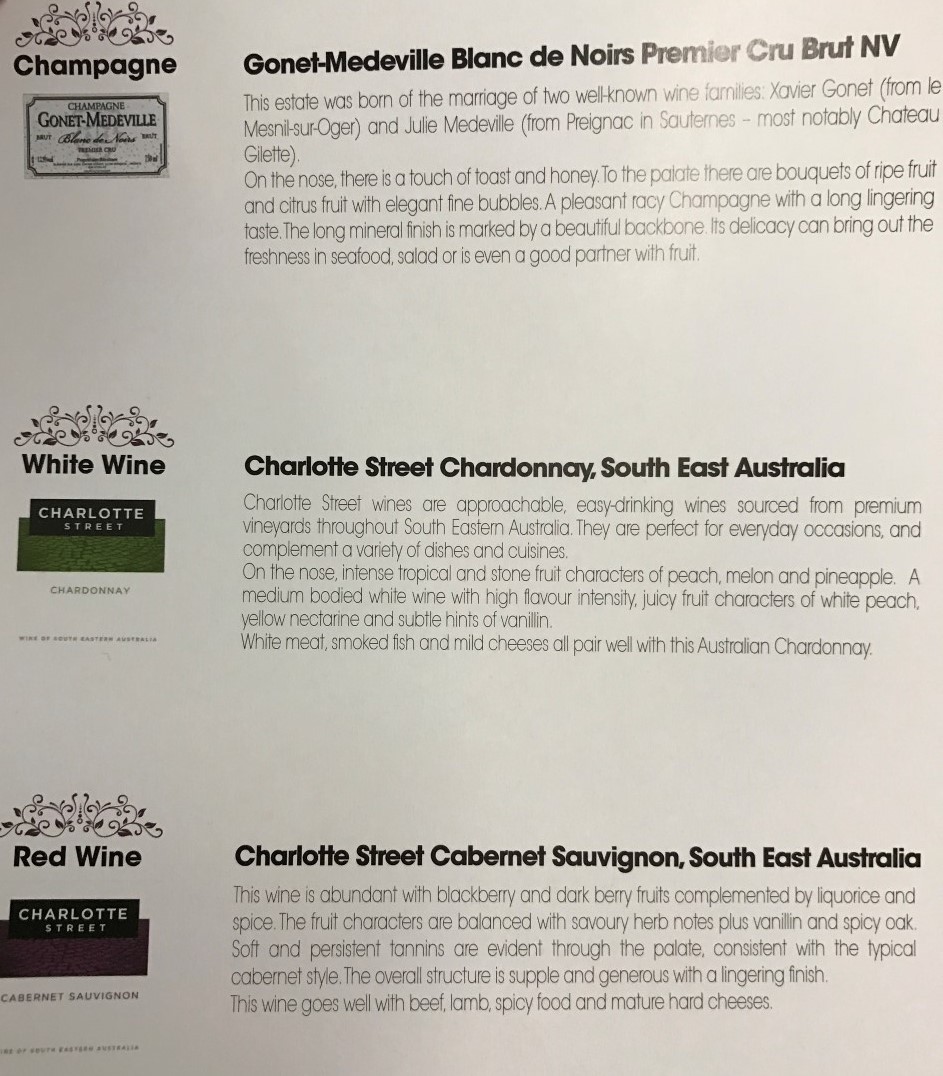 The food, too, left a lot to be desired. I didn’t eat the rotten avocado and prawns that smelled wrong, and the soba noodles were crunchy. (Soba noodles are not supposed to be crunchy.) The beef, too, was pretty bad, and the pile of boiled potatoes didn’t help. If I were comparing this with premium economy meals, it was well below par.

Hong Kong Airlines business meal. The only choice was for the leather. I mean beef. #thatjohnonhx #PaxEx pic.twitter.com/3NbifMhI1Y

On-demand inflight entertainment promised great things but didn’t deliver. The low-resolution screen was matched by the low-resolution movies with hardcoded Chinese subtitles that would have shamed a Sanlitun illegal DVD hawker in quality. The selection itself was mediocre: a handful of early window movies, a reasonable dozen or so “classics”, but a very small set of TV shows. 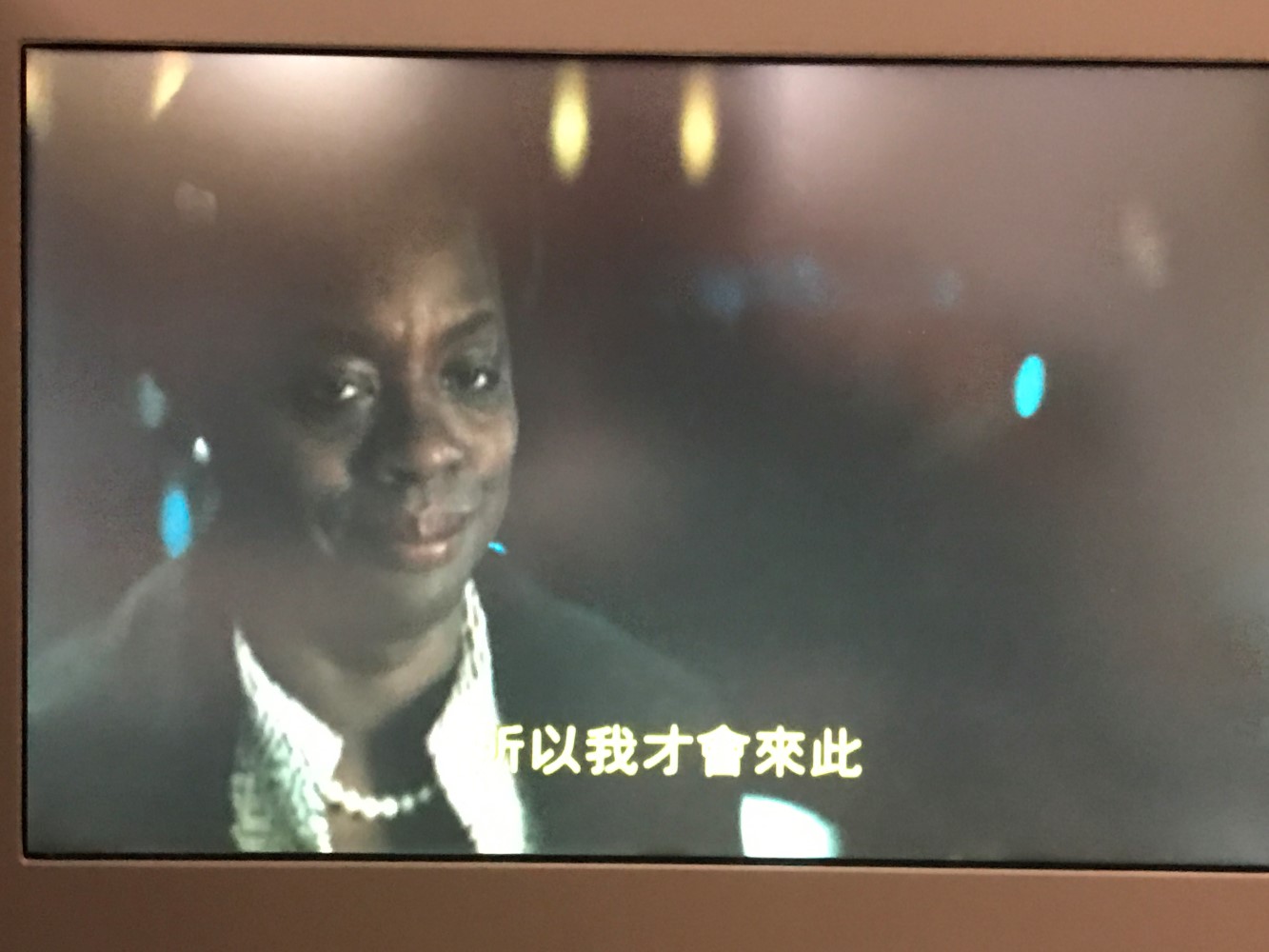 The service on this three-hour flight was friendly enough, but lacked either the service training of Cathay Pacific, the omotenashi hospitality culture of the JAL or ANA, or the cheery commission-driven enthusiasm of the low-cost carriers also serving this route. With a personal welcome and thank you from the purser, it struck me that Hong Kong Airlines is doing some things right, but could do with more processes and checklists to raise its game.

After overnighting in Hong Kong and catching up with some friends, I checked in at the Hong Kong Airlines premium desk, which was decent enough except that the staffer couldn’t figure out that the printout I was handing her was my proof of onward travel from New Zealand, and that was why the system wasn’t happy about me checking in without it. I know this is a new route, but it felt like a bit more training might have helped.

With these chibis I feel like I'm back in Japan! #thatjohnonhx #PaxEx pic.twitter.com/wSv6iOcoVB

Unfortunately, and unusually, Hong Kong doesn’t have a priority queue, but I used my old HKG trick of picking the queue closest to the usually-empty crew/diplo line, looking very ready to pull out my stuff from my bag, and catching the eye of that line’s staffer with a smile.

Hong Kong Airlines’ Bauhinia Club is used by a wide range of airlines, including oneworld carriers American and S7, who I assume are too cheap to direct their unwitting passengers to Qantas’ or Cathay Pacific’s much larger, nicer, and presumably more expensive lounges.

The Bauhinia Club is a small space, with a couple of rows of close-in chairs facing a wall of windows, and a few more chairs in clusters around the lounge. There’s no real business section apart from a few bar stools around a pillar featuring a shelf with old, un-updated iMacs. Food was generally sparse and disappeared as soon as it was brought out to the full lounge, and the to-order noodle soup stand was a nice touch but didn’t match up to Cathay’s. A new lounge is expected to open early next year in the midfield satellite terminal, from which I boarded. The lounge staff were very keen I leave 30 minutes for the 7-minute trip on the little shuttle train. Apart from being something of a scrum to get through to the business class queue, boarding was smooth and on time, with a separate jetway for business class.

The seats on this new twelve-hour flight to Auckland were much less pleasant: rather clunky angled lie-flat seats with particularly droopy shin extenders, in a 2-2-2 configuration. Fortunately, I lucked out and didn’t have a seatmate, which meant I at least had a bit of storage and an extra power socket, but the early afternoon departure meant that I wasn’t tired enough to sleep on the uncomfortable angled surface until nearly breakfast-time.

Dinner departing Hong Kong wasn’t much better than out of Osaka. I like the Chinese dish they were aiming for with the barbecued spare ribs, but these meat slabs were dried out and the wrong texture. The overcooked and rubbery pork loin and gloopy potatoes didn’t rescue the day, although the small cheese plate was surprisingly good.

No mid-flight snack rounds were made, nor was anything on offer in the galley when I popped in to stretch my legs. Eventually, after a bit of cajoling, the crew rustled up a cheese plate from dinner.

The same Gonet-Medeveille Champagne was loaded in greater quantities and didn’t run out, and the two buck chuck Aussie wines were joined by some two buck chuck Chilean wines. None were particularly good, and the crew only knew about “white wine” or “red wine”.

After dinner, I had to suggest to the crew that they might want to turn off the cabin lights and dim the one in the galley streaming over the ill-fitting curtain across the first two rows. The lights snapped all the way on again with a lot of galley clatter about four hours before landing for an enforced breakfast, which took way too long, way too early in the flight. I went for the frittata, which was surprisingly pleasant. After breakfast was cleared, the lights snapped off again until about forty minutes prior to landing. 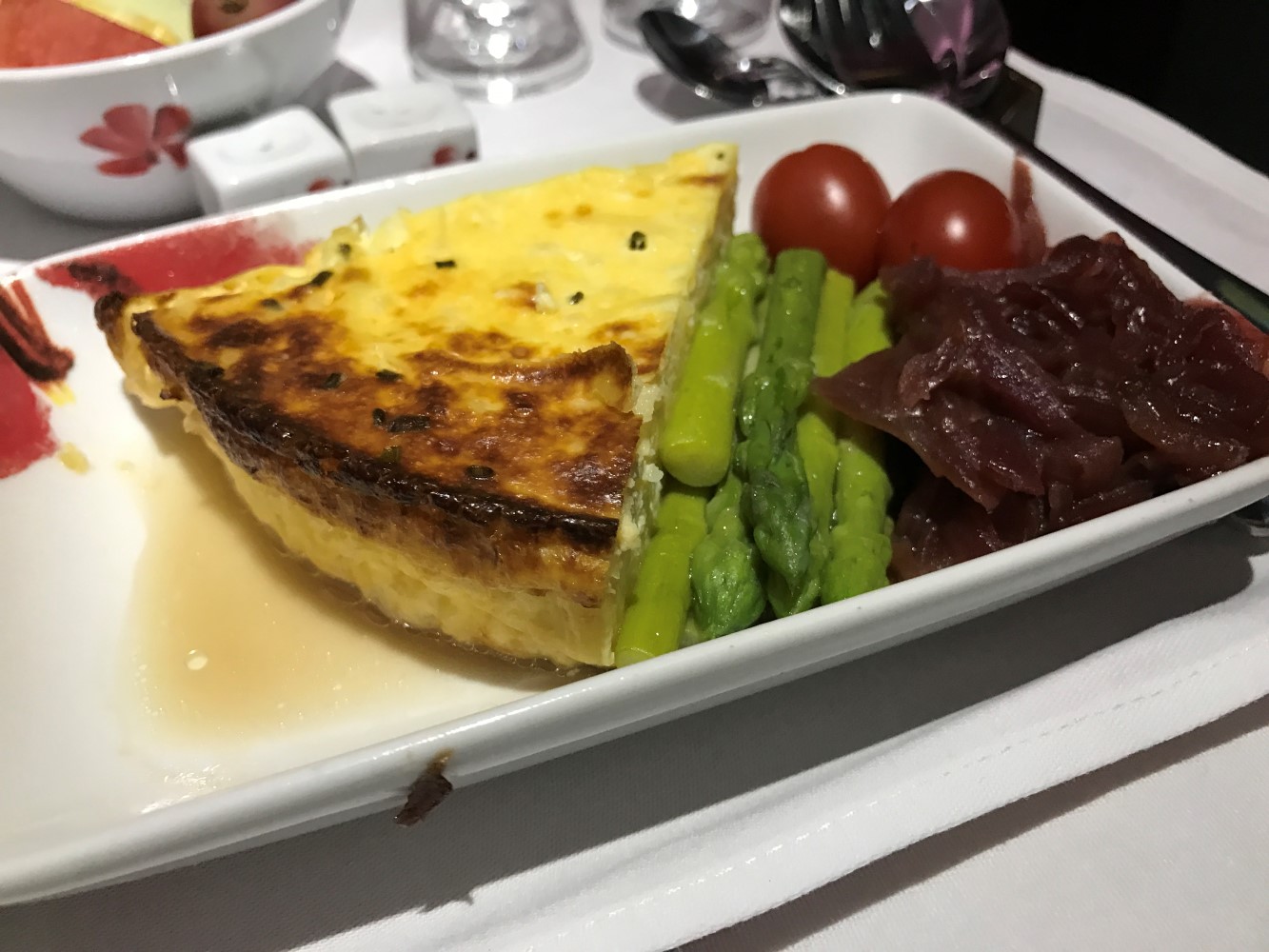 Apart from being very wet, the frittata was the best thing on the plane after the cheese. Image: John Walton

Overall, for the price I paid, I had low expectations, and I would have been happy with premium economy meals and service in a slightly better than premium economy seat. I got the second half of that bargain. Hong Kong Airlines needs to do some serious work on its inflight customer service with its friendly but disorganised crew, and could do with reviewing the quality and provisioning of its food and beverage options too. And if it ever wants to charge anything more than premium economy prices, those angled lie-flat seats have got to go. 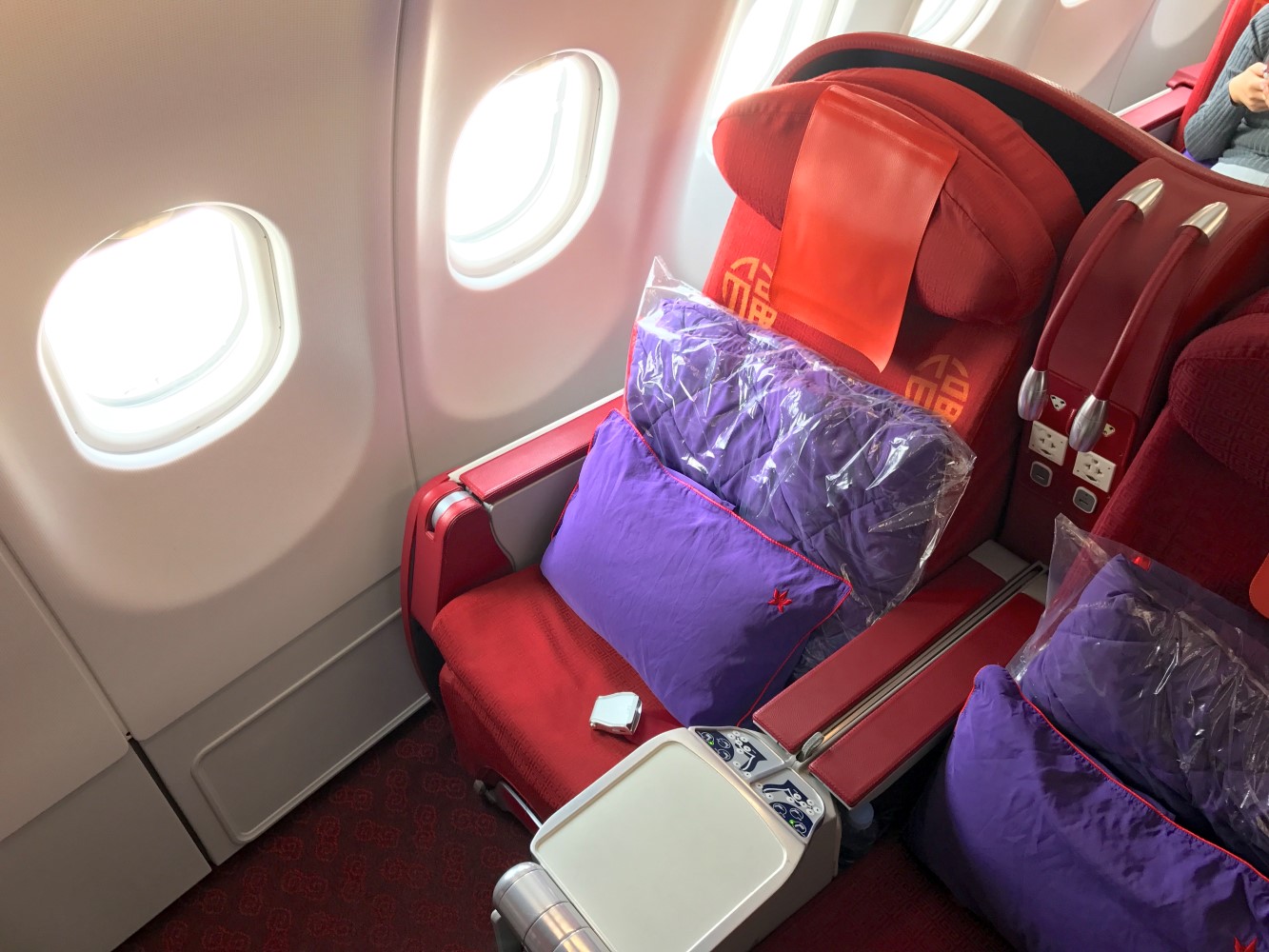 I wasn’t impressed by the old and clunky seat for half a day to Auckland. Image: John Walton 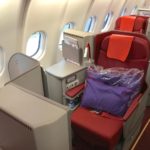 The Solstys seat on the short hop KIX-HKG was comfortable and spacious. Image: John Walton 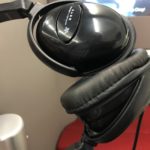 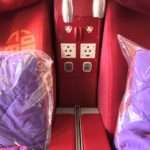 The AC port worked fine, but the USB wouldn’t even trickle-charge my iPhone. Image: John Walton 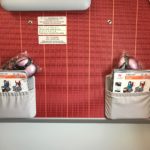 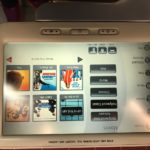 Even my favourite terrible movie, View from the Top, couldn’t improve this selection. Image: John Walton 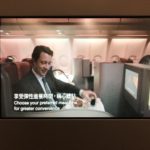