With 2022 drawing to a close, I was craving one last adventure. Luckily for me, I had built up some vacation time and quickly set my sights on Europe, where a few specific experiences had been calling my name since before the Covid era. Once my ducks were in a row, I set about to build the trip.

Originally the plan was to fly to Paris via LAX in order to try Air Tahiti Nui or French Bee. But then I got lucky.

Irish flag carrier Aer Lingus partners with Alaska Airlines for award redemptions, though it is not currently part of oneworld. Unlike most Alaska awards to Europe, premium cabin redemptions are easy to find on the Shamrock airline and taxes/fees are low. But the redemption rates are typically high, regularly clocking in at 4.5x that of the next closest partner.

That is until a very lucky search from a friend turned up a result for only 60K miles from my home base of Seattle to Paris via Dublin in early December. I booked it instantly, paying $20.70 in taxes and fees. The cash cost of the business class seat at the time of booking was $3,300.

While a booking code and confirmation appeared quickly, neither the Alaska app nor the Aer Lingus website would let me select a seat. A quick call to a very friendly Aer Lingus customer service agent addressed the issue, and I wound up in 6A.

Several weeks later I was stepping off the curb and into SeaTac Airport on a pleasant December evening. Checkin and bag drop took 25 minutes. It was long, but far better than the incredibly slow-moving line for economy class. Aer Lingus does not use TSA PreCheck, but thankfully the premium cabin lines at the security checkpoint were relatively short.

The carrier utilizes the British Airways Terraces Lounge at SeaTac. But it was badly overcrowded, so I grabbed a few quick bites and a water and left to walk around the terminal instead.

Boarding calls in the lounge were made on time, though nothing was happening at the gate. An update came 20 minutes later announcing a 20-minute delay. But only five minutes later, Aer Lingus began boarding anyways. 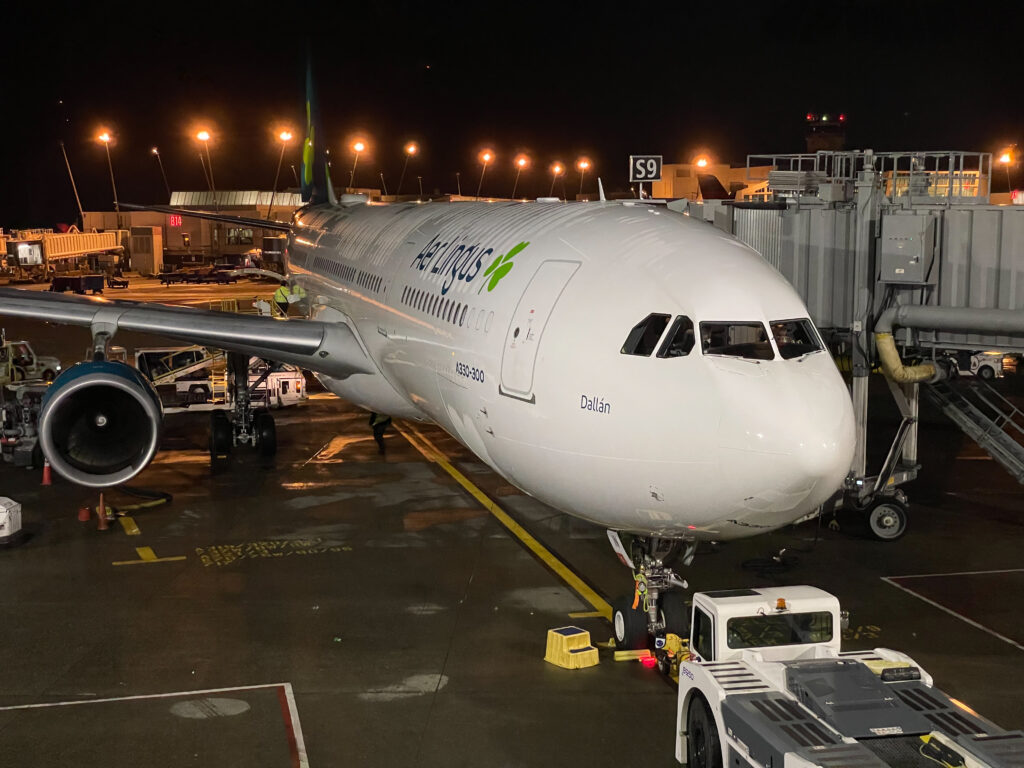 Once down the jetway, my travel buddy and I stepped into the Aer Lingus Airbus A330 widebody aircraft. 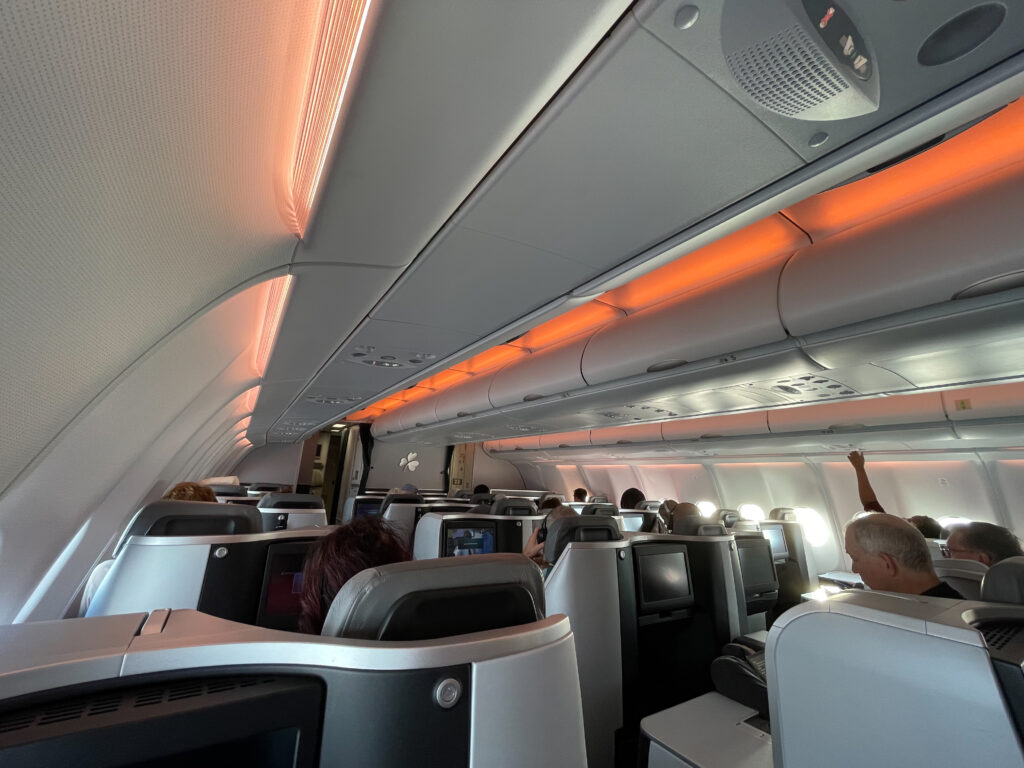 The cabin is mostly whites and grey, with pops of the airline’s signature shades of green emanating from the upholstery on the seats. The left side of the airplane is configured with all direct-aisle solo seats, making it great for travelers like myself.

The center is arranged in pairs, while the right side alternates between pairs and solo seats and features the well-known throne seats (3K and 5K), both of which were already unavailable when I called for a seat assignment several weeks back.

I trundled up the aisle to 6A, my bag easily fitting in the overhead bin above. 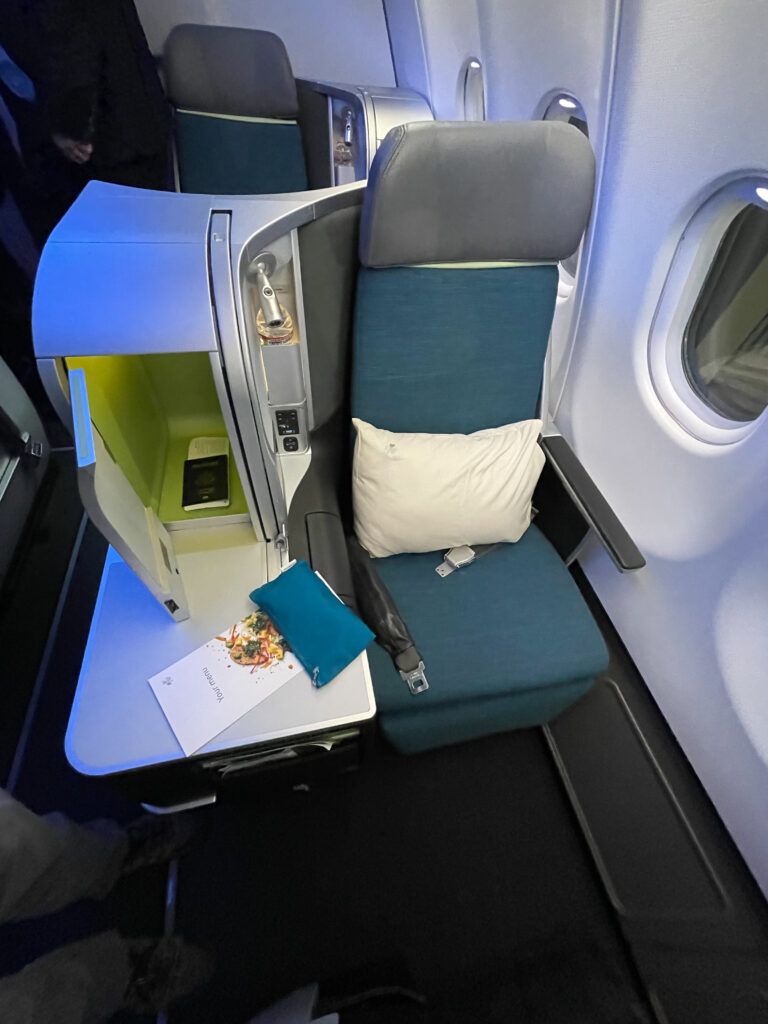 A crew member came by with free Wi-Fi vouchers and offered a pre-departure beverage, while the pilot updated the cabin with an expected flight time of just under nine hours. 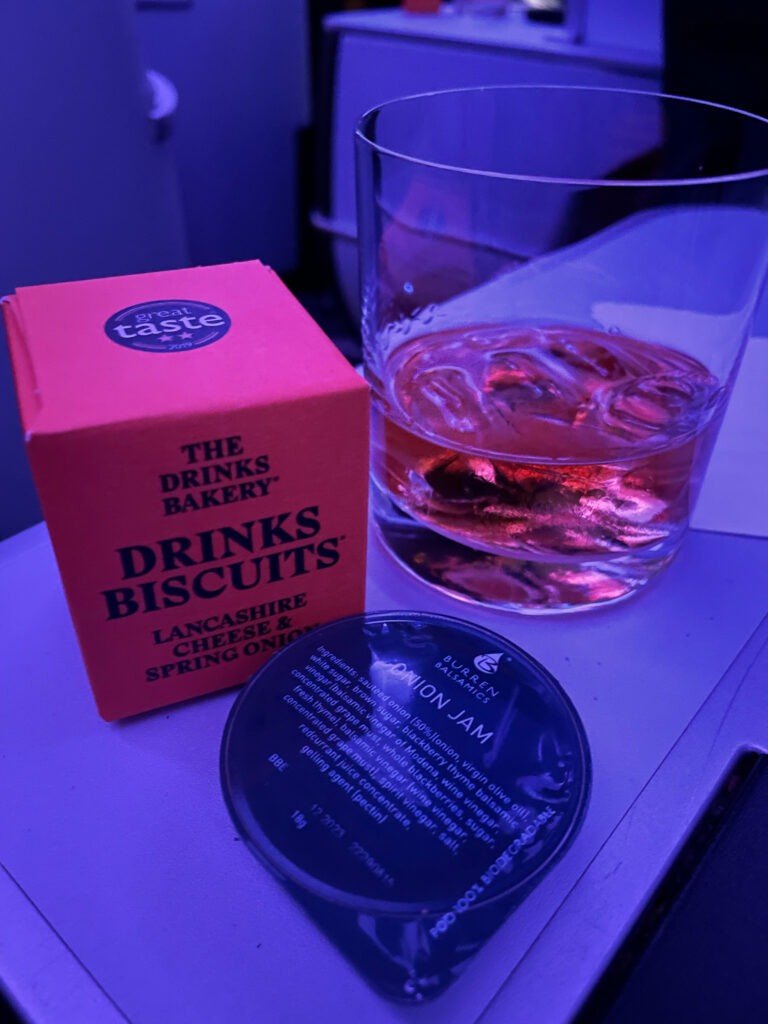 A pillow, headphones, and bottled water were waiting on the seat. 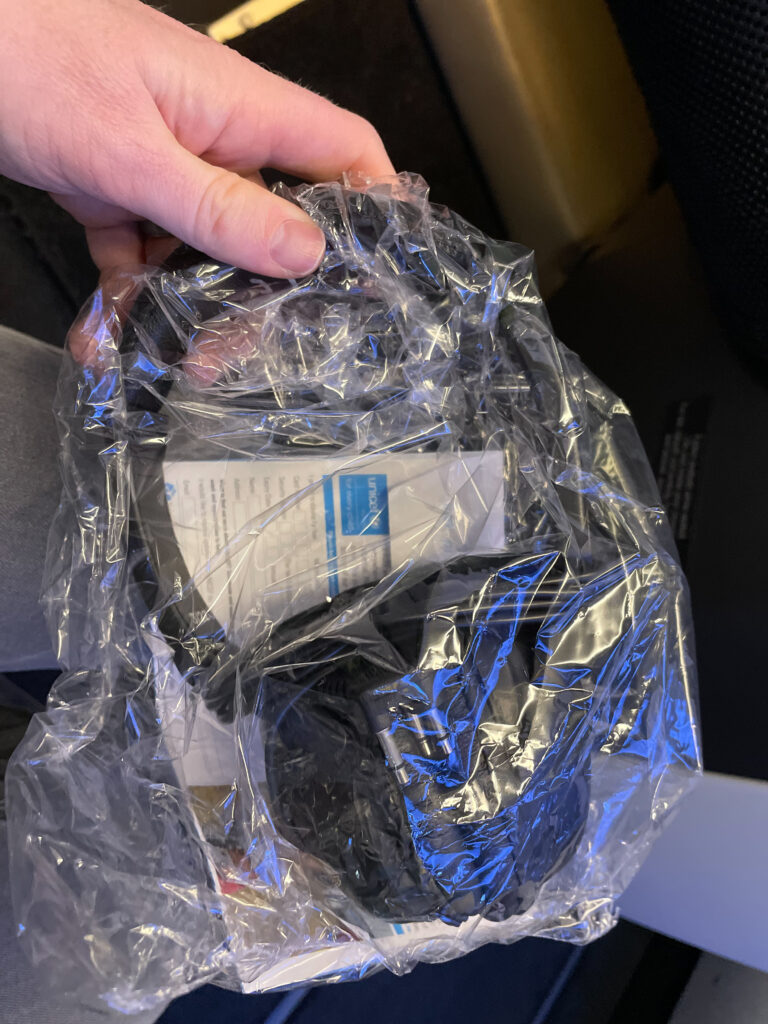 A modest amenity kit contained everything you’d need in a pinch, but wasn’t anything to write home about. 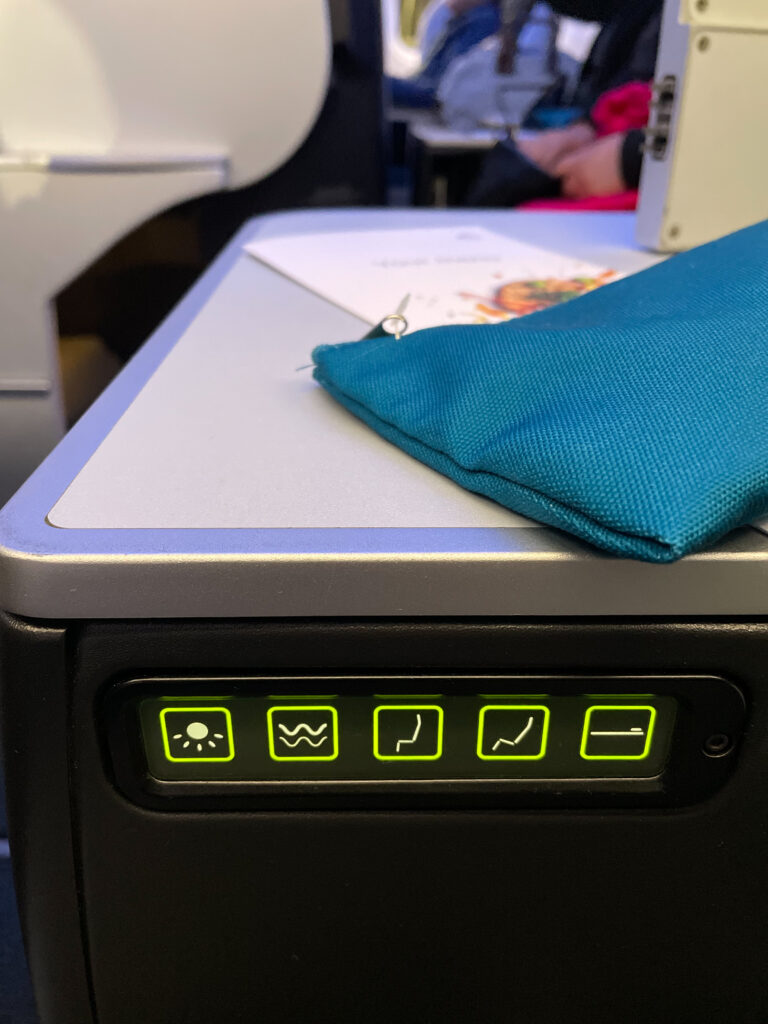 We departed some 45 minutes late, tracking northeast into the night.

The first of two meal services began not long after departure. The crew offered both a full white linen service or a single-tray express option. Having skipped dinner at home, I opted for the full service.

Between the departure delay and a slow start, everyone wound up being offered a quasi-express service anyways, which was fine by me. Both the appetizer and entrée appeared together 80 minutes into the flight. The star of the show was the entrée, a coconut curry dish with butternut squash on rice. This meal rates among the best I’ve ever had on an airplane. My travel mate raved equally about the beef option. 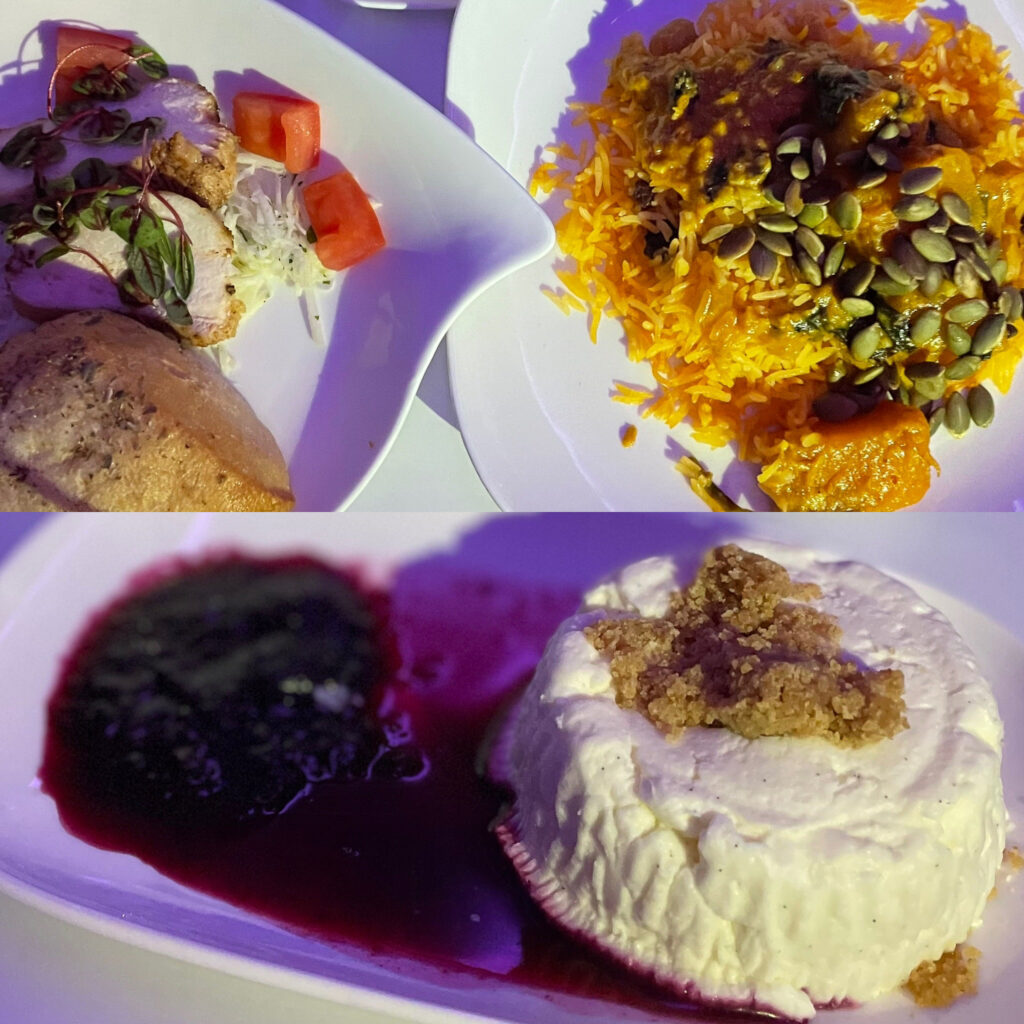 The crew was very attentive and friendly, offering refills and clearing plates almost instantly. Their efforts were doubly impressive given that they had been stuck in Seattle for five days after weather kept canceling the flight, and the night before had even managed to get airborne only to have been stymied by a diversion back to Seattle due to a maintenance issue.

A small dessert of cheesecake with berries and a cup of tea wrapped up my evening, before I quickly dozed off.

The ‘Vantage’ seat itself, made by Thompson Aero Seating, and first introduced to Aer Lingus in 2015, was comfortable if aging. Worn edges and a storage cubby door that was difficult to shut betrayed its longevity in the fleet. 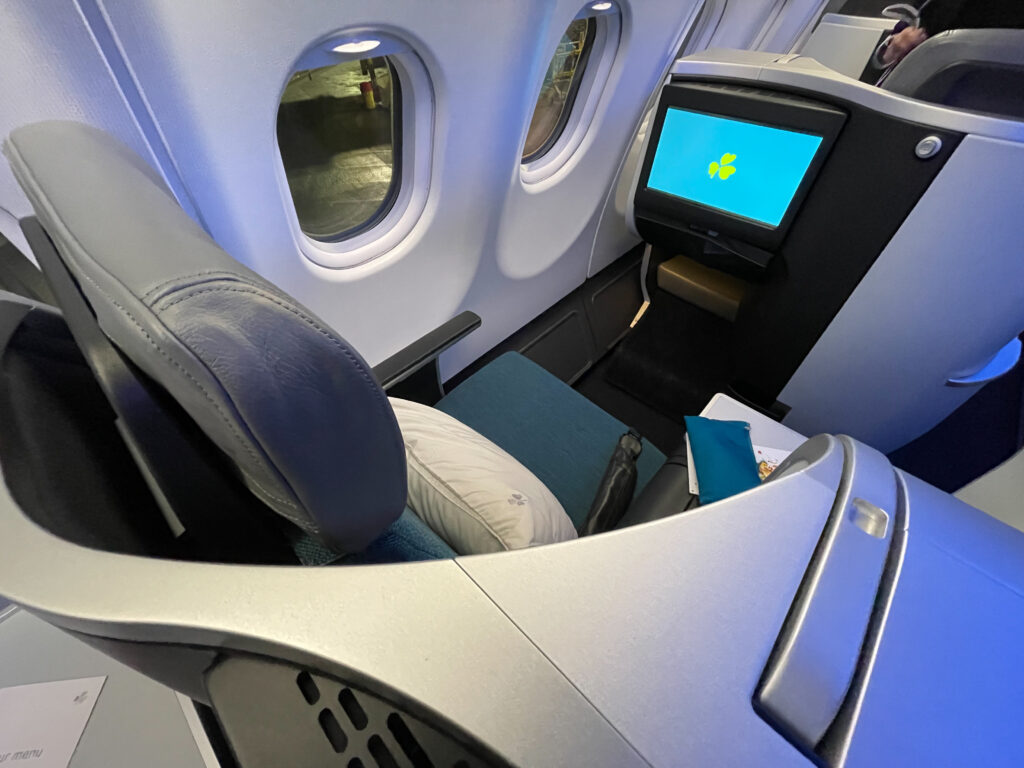 The seats are offset to accommodate the footwell of the passenger behind you. For even rows that means that the seat itself is aligned with the sidewall of the airplane, giving much more privacy to the passenger. The downside, it seems, is that these particular seats are not typically the widest; I could feel a tightness in the shoulders while reclined fully.

Nonetheless, when combined with a duvet that appeared after takeoff, I slept very soundly for five hours. So soundly, in fact, that I slept straight through the breakfast service!

Thereafter, I caught a few shows on the inflight entertainment. The HD in-seat screen was crisp and clear. Plus the IFE system was very well stocked, with multiple movies and TV shows, including several full seasons. The system can be controlled by touching the screen or via a tethered remote, but alas the latter didn’t work half of the time. 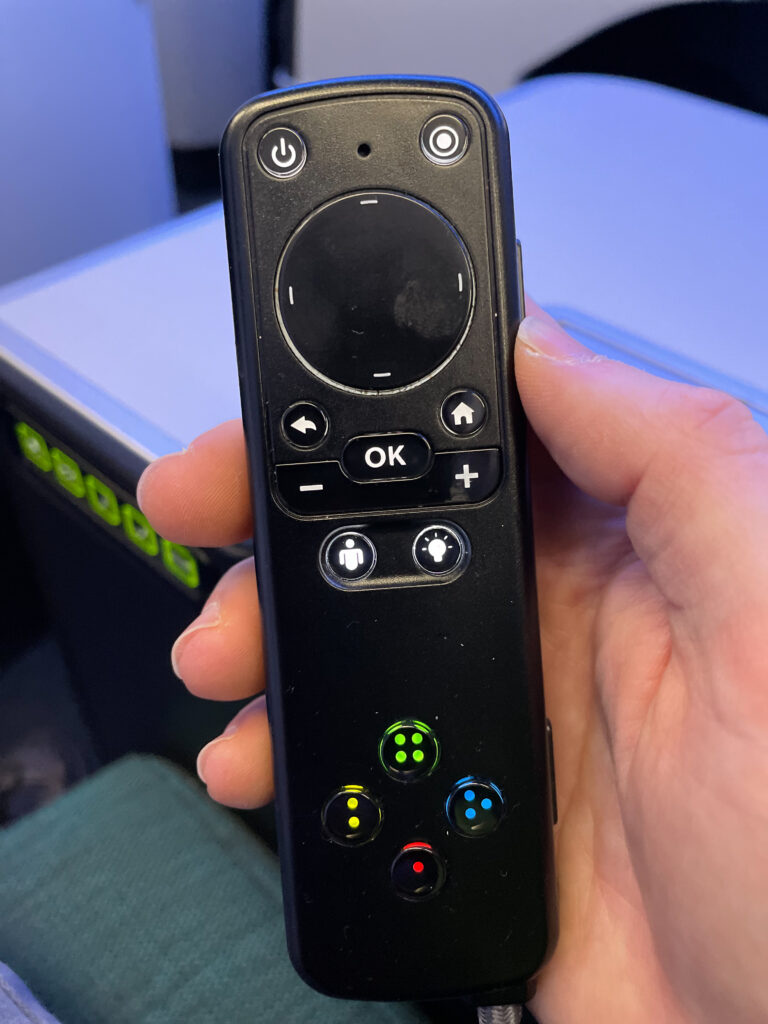 The IFE could also be controlled, so it said, via smart phone if you have the Aer Lingus app. I wanted to see this in action, so I fired it up. 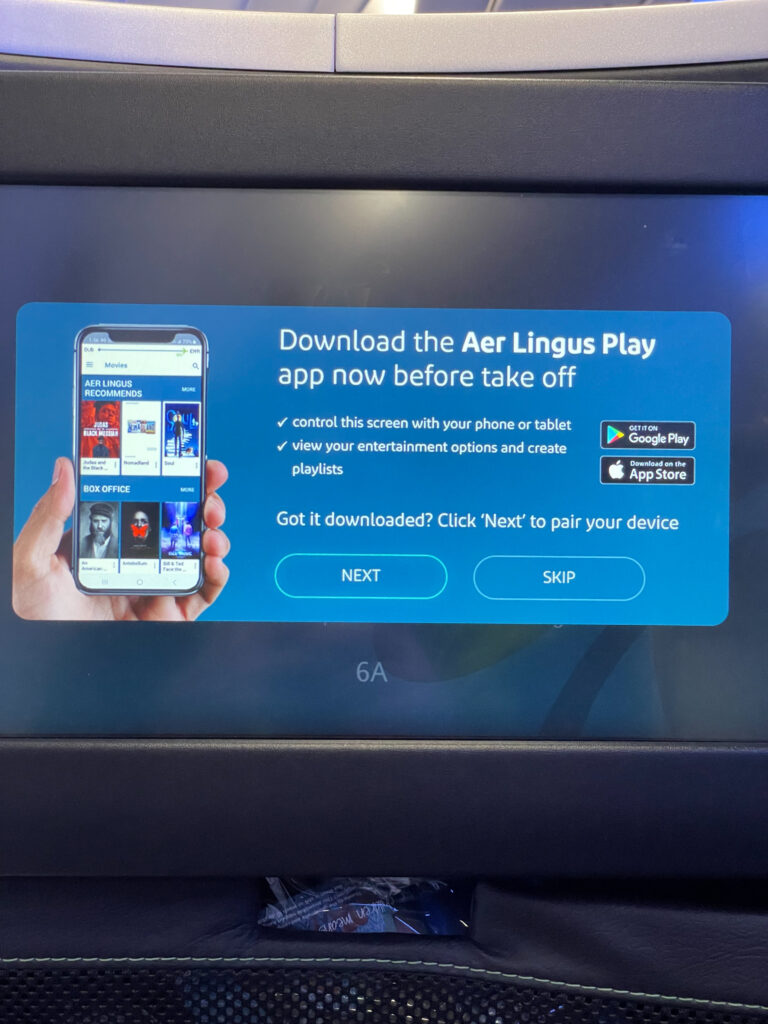 Unfortunately, I immediately received a notification saying that the service was not available on this flight. Easy come, easy go, I guess.

Wi-Fi was available too, powered by Panasonic Avionics, but it frequently cut out throughout the flight. When it was working, speeds came in at 4-8 Mbps down and .2 up.

When Wi-Fi works only intermittently, it might not have a huge impact on an overnight flight as most folks are trying to sleep. Had I needed to stay connected — or paid for the service in economy class — I don’t think my perspective would be so generous.

The flight landed just before 2pm local time in Dublin. We quickly deplaned, and I made the easy connection onward to Paris.

In terms of passenger experience, I expected Aer Lingus to be solidly middle of the road and not much more. Yet I wound up disembarking Dublin feeling rather impressed.

Yes, the aged hard product is in need of some TLC, and the wonky inflight Wi-Fi was an irritant, but the most disappointing part of the flight was that I slept through breakfast!

The stellar cabin crew, a good night’s rest in a solid seat, and surprisingly good onboard catering turned this Aer Lingus A330 flight into one of the better business class experiences I’ve had of late. 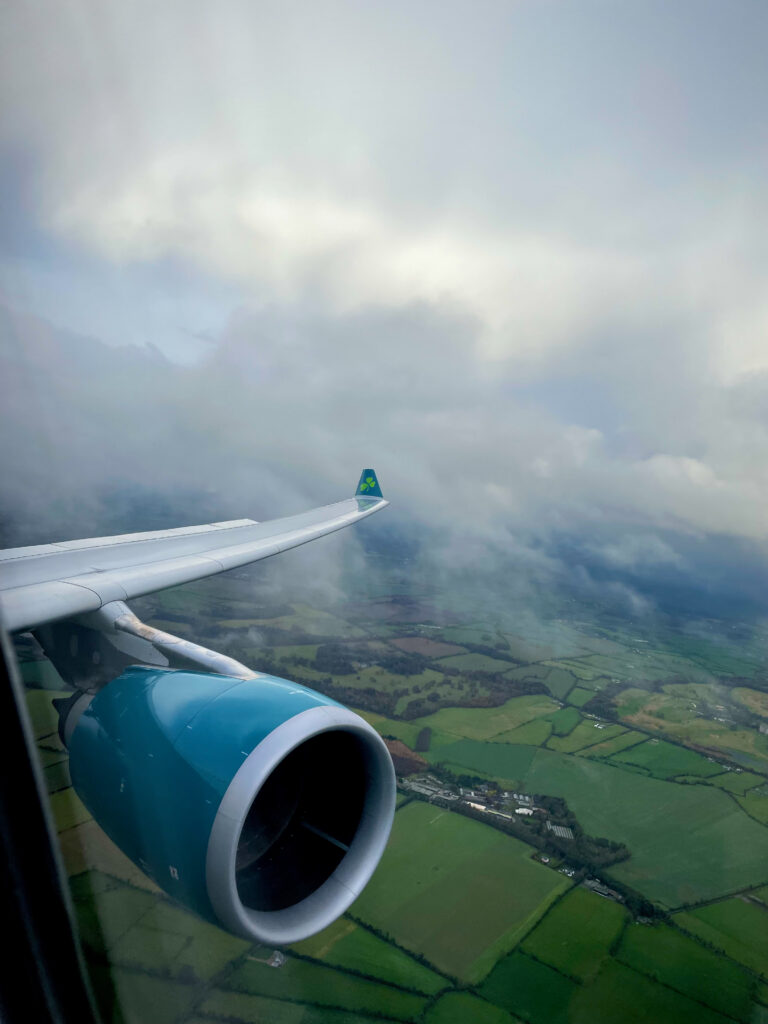 Why the JetBlue A321ceos are begging for an update