Though London Heathrow’s Terminal 3 has a plethora of high-quality airline lounges, including the stunning Cathay Pacific space, Virgin Atlantic’s Clubhouse is revered as the leader of the pack.

But did Virgin’s pandemic-era changes — including the loss of a beauty salon and the addition of (now infamous) Peloton bikes — take a little bit of the shine off of Virgin’s ruby red crown? I recently I had the pleasure of spending time in the Clubhouse where I discovered that the Virgin flair still keeps this lounge ahead of the curve.

I arrived at an ungodly time in the morning via the Upper Class wing, Virgin’s drive-up checkin area which is incredibly refined. With a 1970s Worldport design, the space evokes the golden era of airline travel. 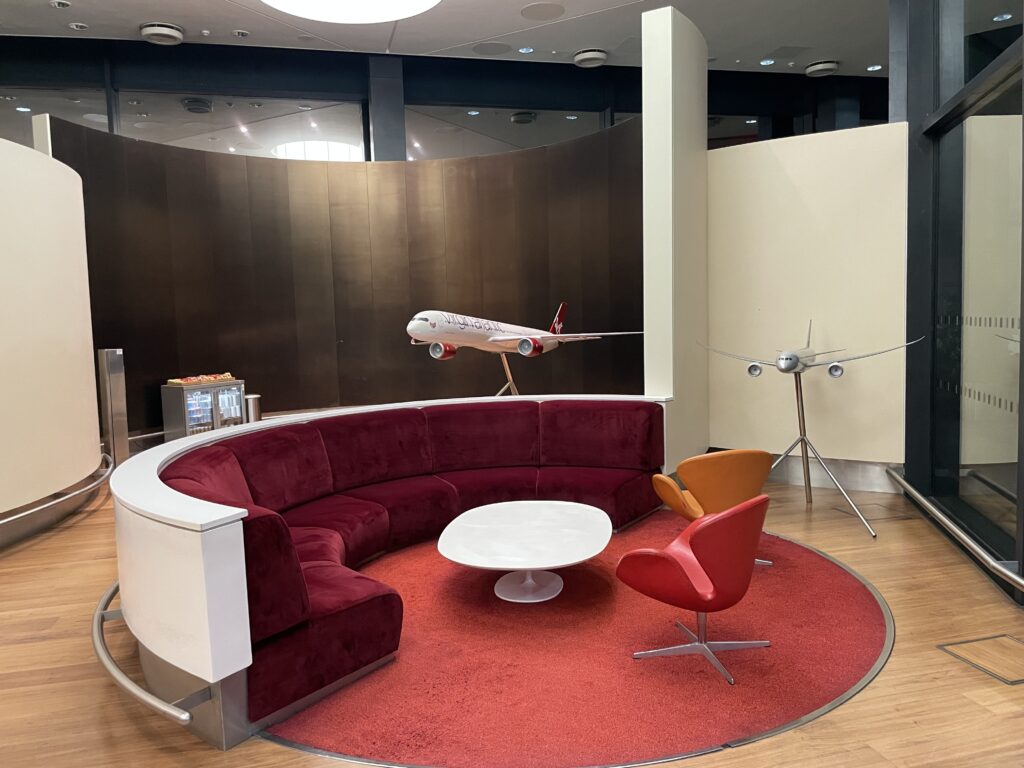 The Upper Class Wing is a beautiful space to hang out in, but I was through in moments. Image: Fintan Horan-Stear

A premium security lane leads to the Clubhouse. After a short wait for the lounge to open, my fellow eager beavers and I were welcomed inside by staffers who looked resplendent in their red uniforms. 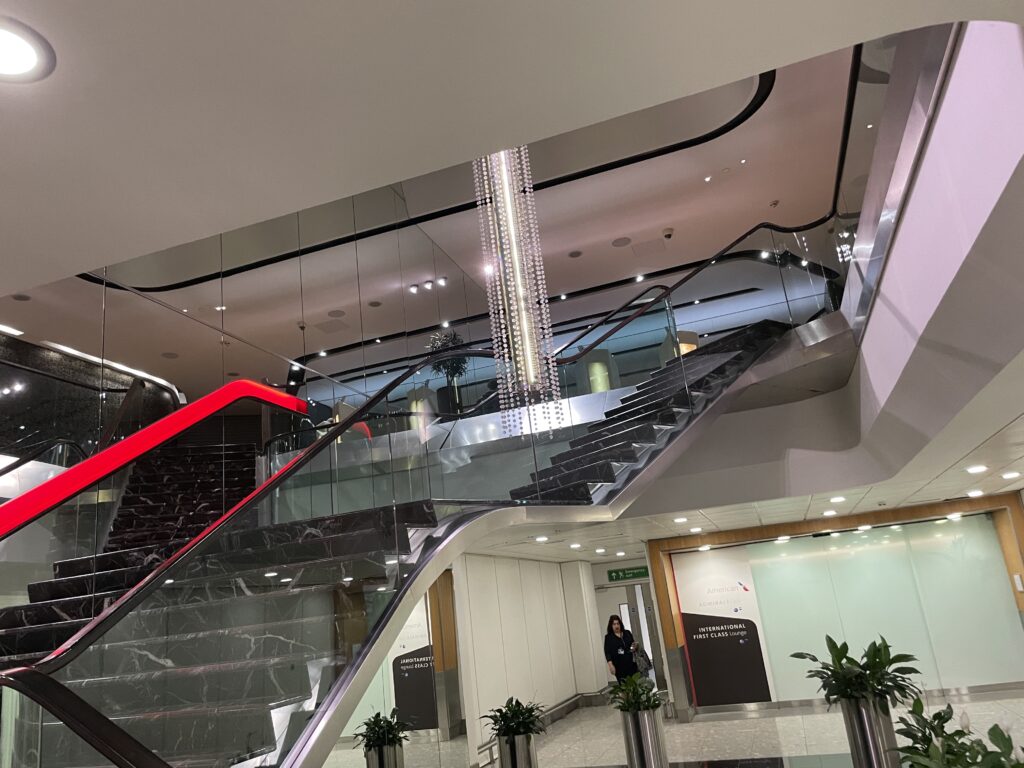 The Clubhouse is accessed via some sparkly stairs, or lifts with banquette seating. Image: Fintan Horan-Stear

The entrance opens up into the main bar, which is encircled by a raised walkway that connects to the other seating areas. The lounge feels vast; the cavernous central area is flanked by intimate seating spaces on all sides apart from a long glass wall running behind it. I confess I was wowed by the modernist design language, which continued throughout the space. 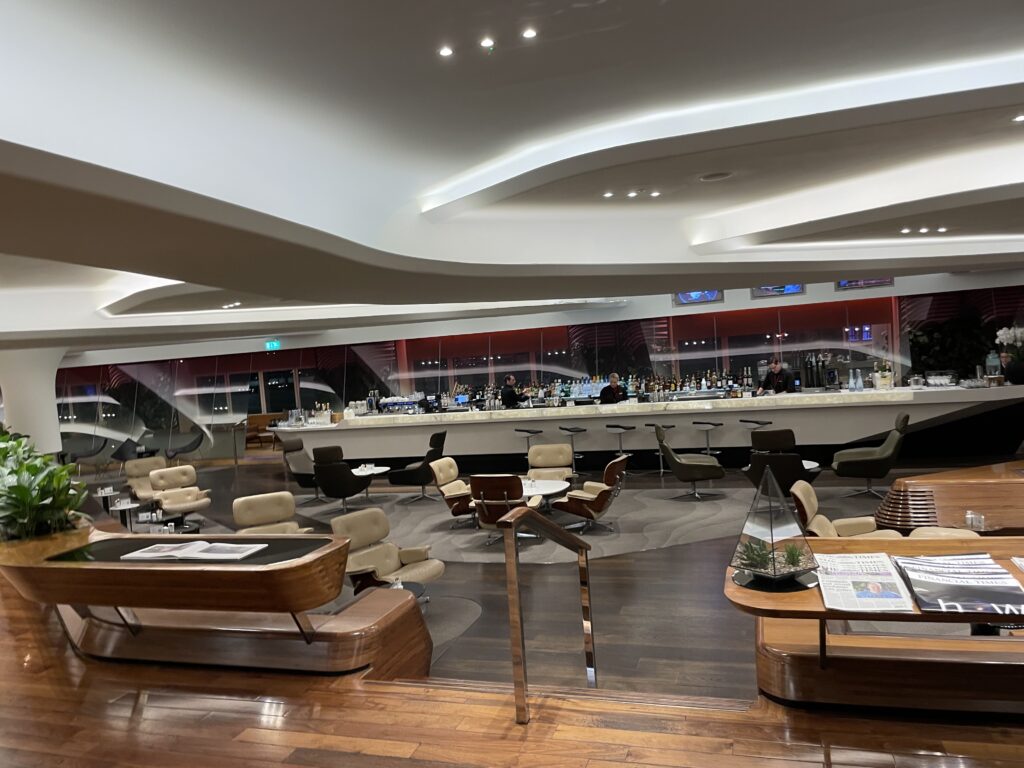 The design of the lounge brings a brilliant combination of space and intimacy. Image: Fintan Horan-Stear

Shaking myself from my reverie, I checked into the reception desk to book a shower. I was immediately ushered into a side area which had individual cubicles. The shower rooms themselves feature bold tiling and REN Clean Skincare is provided, but the quality of the fittings was not flawless, and it felt more functional than luxurious. I reckon that Cathay Pacific’s spa-like showers on the other side of the terminal have the edge on this one. 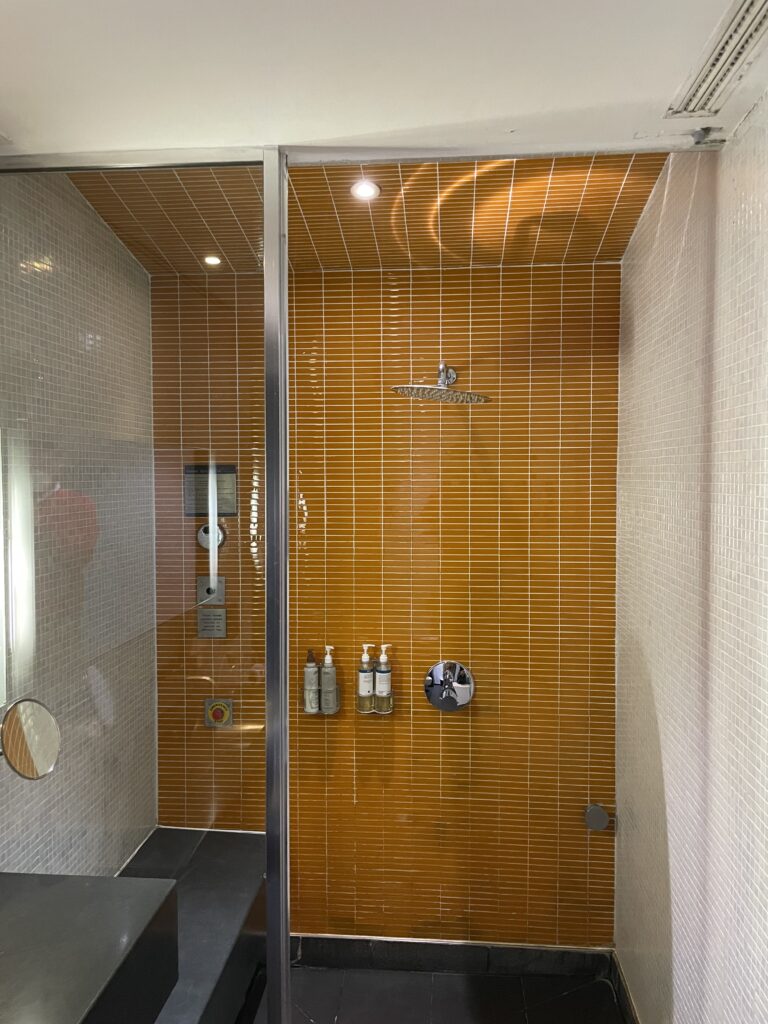 The tiling of the shower was fun but not tacky. Image: Fintan Horan-Stear

After freshening up, I headed straight to the bar. It’s worth noting that table service was available throughout, but I was keen to see what was on offer.

Virgin offers three different champagnes, and I opted for a glass of Laurent Perrier Brut.

Suitably refreshed, I went in search of breakfast. The Clubhouse offers both a deli-style counter for bagels and other breakfast foods as well as a full brunch menu. After installing myself in the quiet bistro dining space, I ordered the French toast and Eggs Royale, which was delivered in a few minutes.

The toast was soft and buttery, with a sharp compote to balance the sweetness. But the Eggs Royale were underwhelming; the hollandaise sauce did little to improve the flavourless salmon.

The meal didn’t eclipse the brunch I had later in the neighboring Qantas lounge. 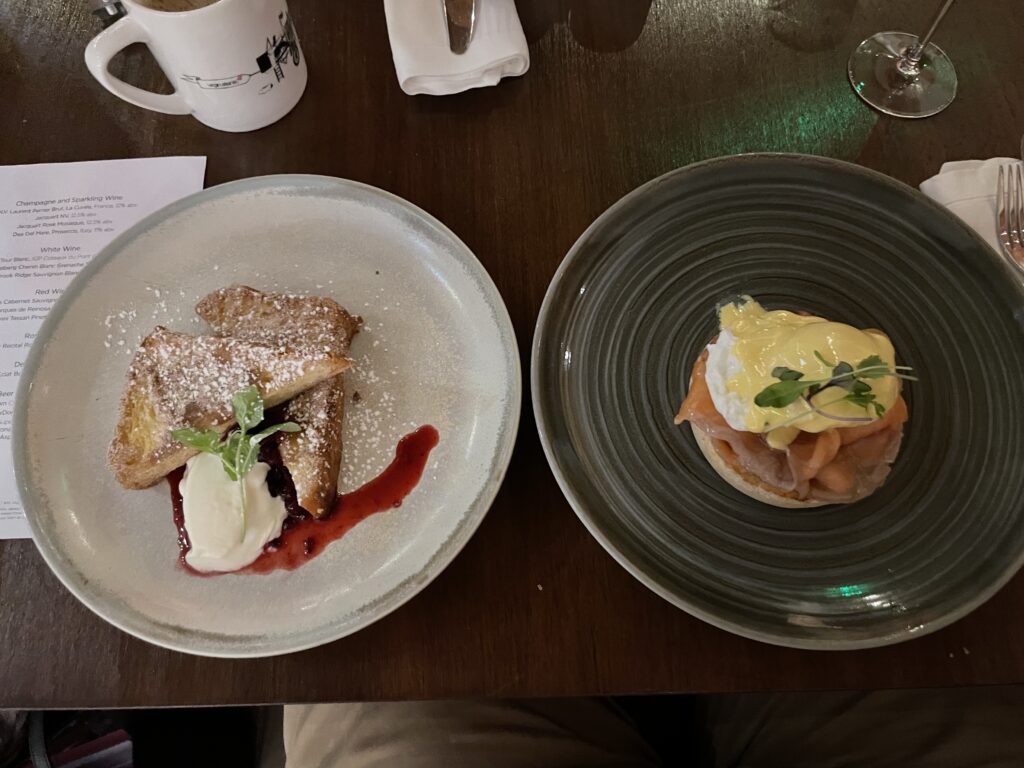 The presentation was good, but the Eggs Royale was lacking in flavour. Image: Fintan Horan-Stear

With some time to spare before boarding, I toured the rest of the clubhouse. I was struck by the sheer variety of options on offer: Instagrammable cabanas and hanging chairs give way to sports bar sofas in front of enormous TV screens. Each area creates a new vibe without being separated from the whole. 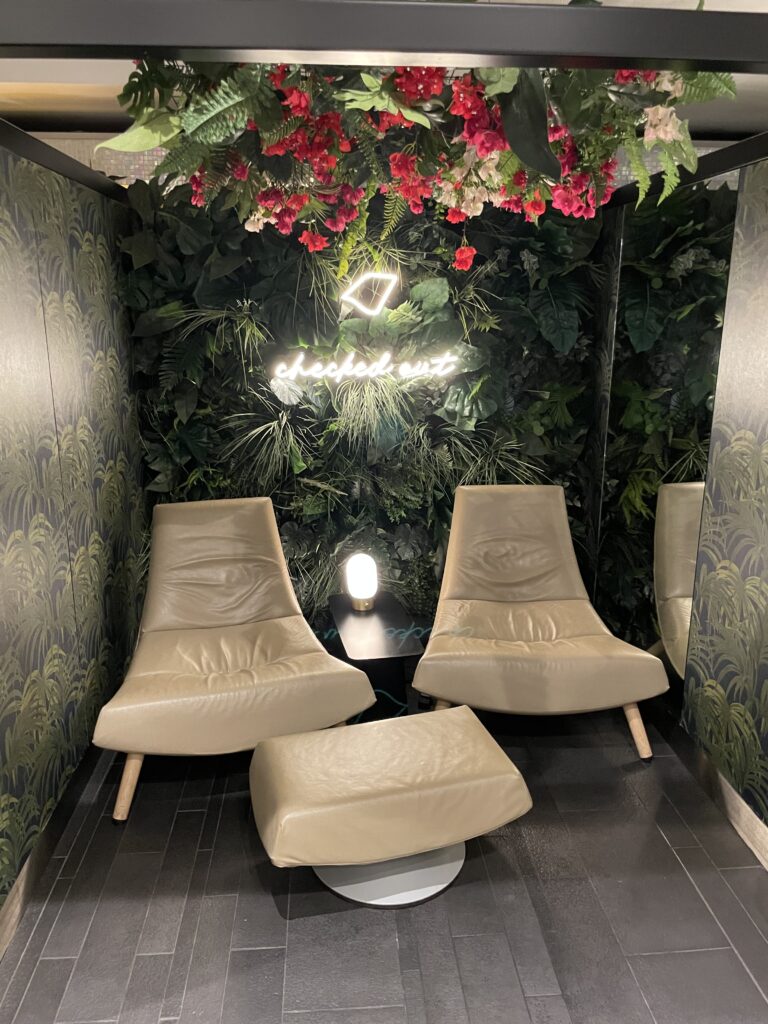 The cabanas felt intimate without being isolated. Image: Fintan Horan-Stear

No doors break off any of these areas, and I could casually stroll from place to place without disturbing those who had settled into their preferred nooks. 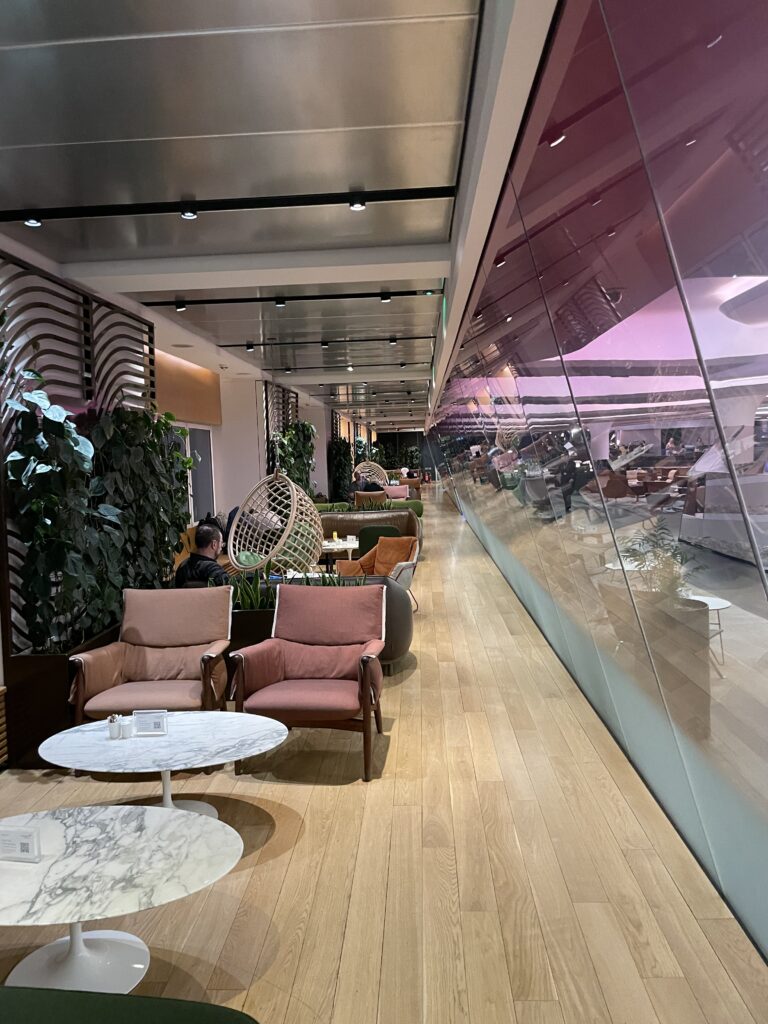 The back area behind the glass wall would be my favourite spot if travelling solo. Image: Fintan Horan-Stear

The clubhouse also boasts an upstairs games room area with pool table that leads to an open-air terrace with views of the terminal. 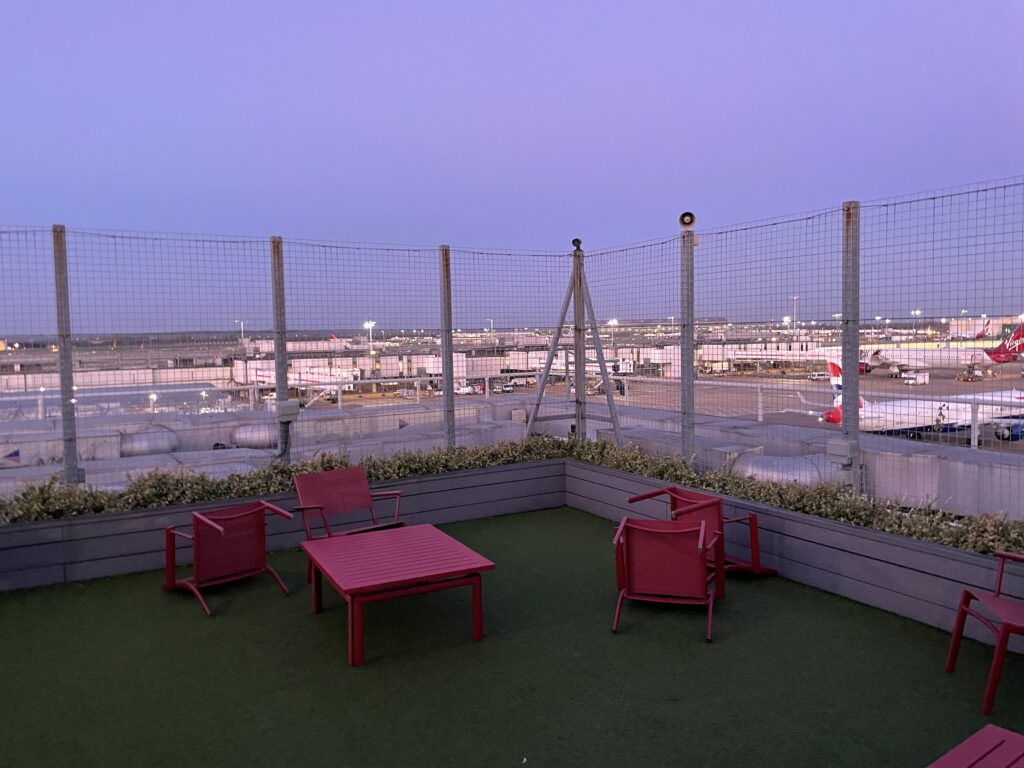 The terrace is a lovely space, but not quite what you want at 6am in November. Image: Fintan Horan-Stear

The design of each space complements the overall lounge whilst having distinct elements, but I was struck that some of it was a bit passé. The smattering of books in different spaces was very stylish 10 years ago, but now that competitors like American Express Centurion lounges are doing this as a global, curated theme, the random selection on the clubhouse walls feels cheap. 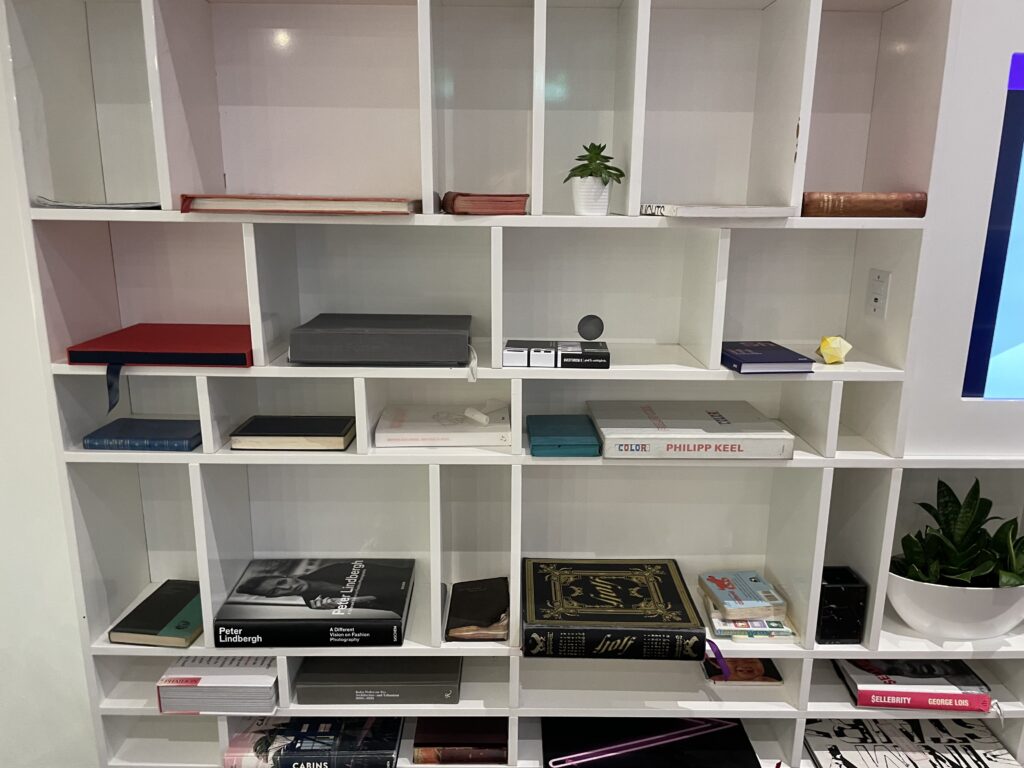 Some of the books were standard coffee table fare, but ancient medical journals seem off-brand for Virgin. Image: Fintan Horan-Stear

Nevertheless, as I left the Clubhouse to head to my gate, I had to conclude that this space remains the pinnacle of lounges available in Terminal 3. Cathay may have better showers, and Qantas’ food may be tastier, but Virgin has elevated every single element to create a truly incredible experience. 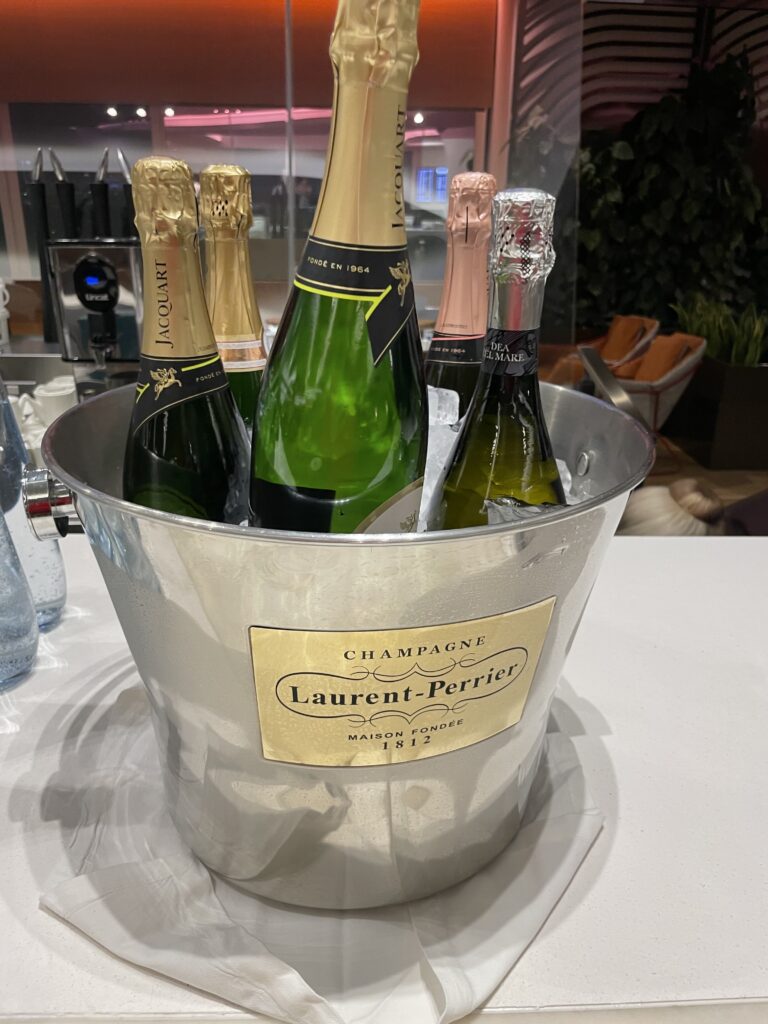