At the Aircraft Interiors Expo in Hamburg last week, the big topic of discussion was Collins Aerospace’s AirLounge seat, presented in its Finnair version on both the seatmaker’s stand and Airbus’ stand at the show. The question on the lips of nearly every seatmaker, exhibitor and passing interlocutory was “have you tried that new Finnair Collins seat?”

Your author did, even if briefly, and the verdict: impressive for a few minutes on the stand, but the real test will come on the long haul, like the now-thirteen-hour flight from Helsinki to Tokyo. 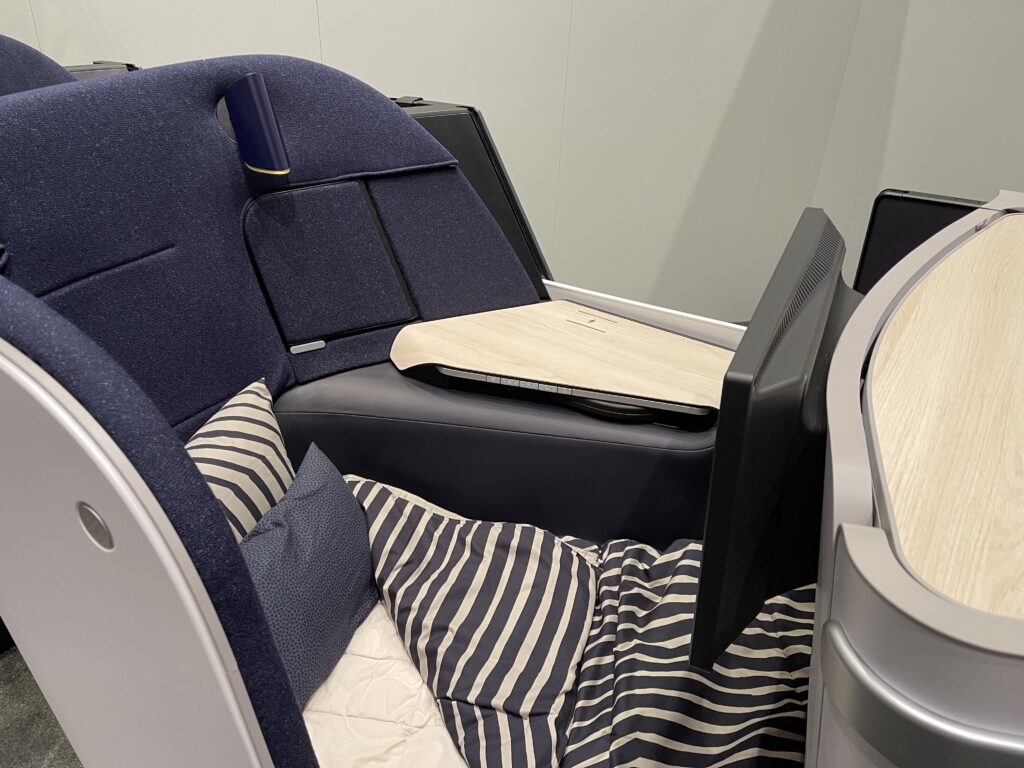 The big question is how comfortable AirLounge will be in bed and seat mode on longer journeys. Image: John Walton

Collins is making a big push for AirLounge, the first sofa-style seat where the passenger doesn’t recline in a la-z-boy-style seat, but rather tucks their legs up to relax and sleep. It is one of the most innovative seating products in a number of years, and would be so even without the delaying effect that the COVID-19 pandemic has had on the industry. 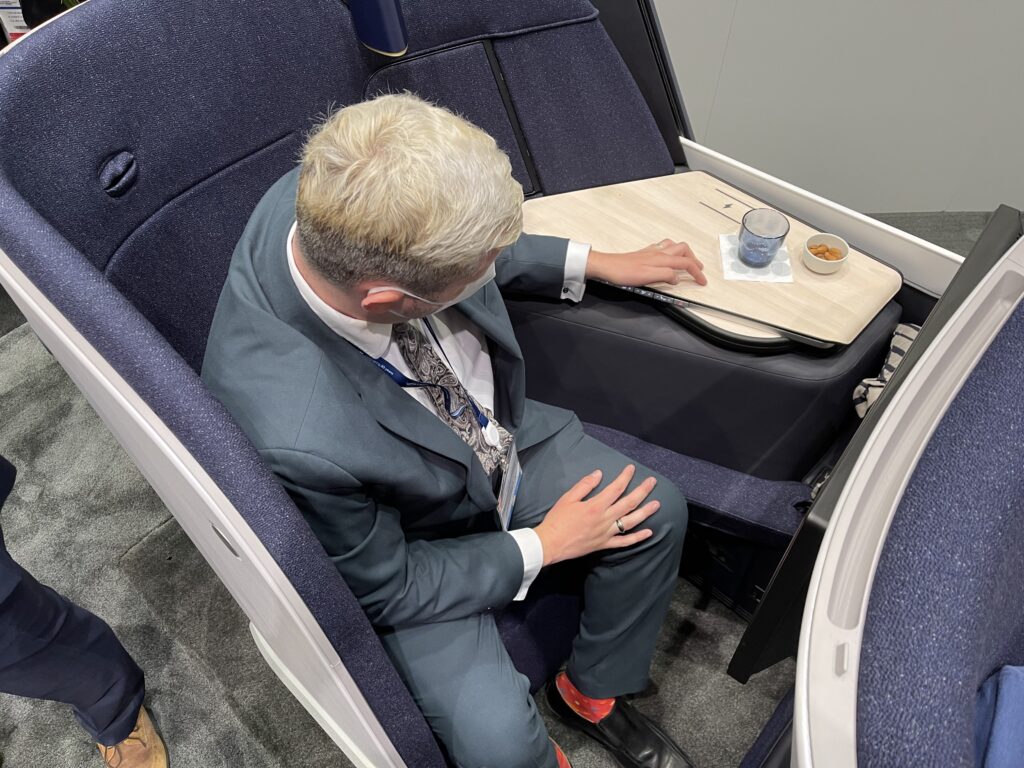 There’s an impressive amount of space, although those above 6’3″(1.91m) or so, or people with big feet, may encounter the usual foot box constraints. Image: John Walton

That pandemic effect, combined with wider market forces, has meant that Collins wasn’t able to show the product to many airline customers prior to AIX, Alastair Hamilton, vice president for sales and marketing for aircraft seating, told Runway Girl Network as the show opened.

However, Hamilton said, “the initial reaction has been very positive. It’s pretty innovative in the space, and it’s the first time for a number of years that something completely different has been done in that space. So I think we’re going to get some interest.”

But which airlines are the market? “Anybody… who is looking at a widebody aircraft,” Hamilton told RGN. “It’s a long haul seat, so it can go transatlantic, transpacific, but would also fit very nicely as a regional seat. So you can imagine the Asian regional market might be interested in this product.”

Discussing the product within the industry, it is clear that AirLounge may be one of those “try it to believe it” products that launches an entirely new category. The overall concept has something of an open secret for some years, and Collins and its predecessor companies brought the seat to AIX before having a launch customer, while the product itself leaked out as one of the candidates to replace British Airways’ previous Club World seat some years ago. 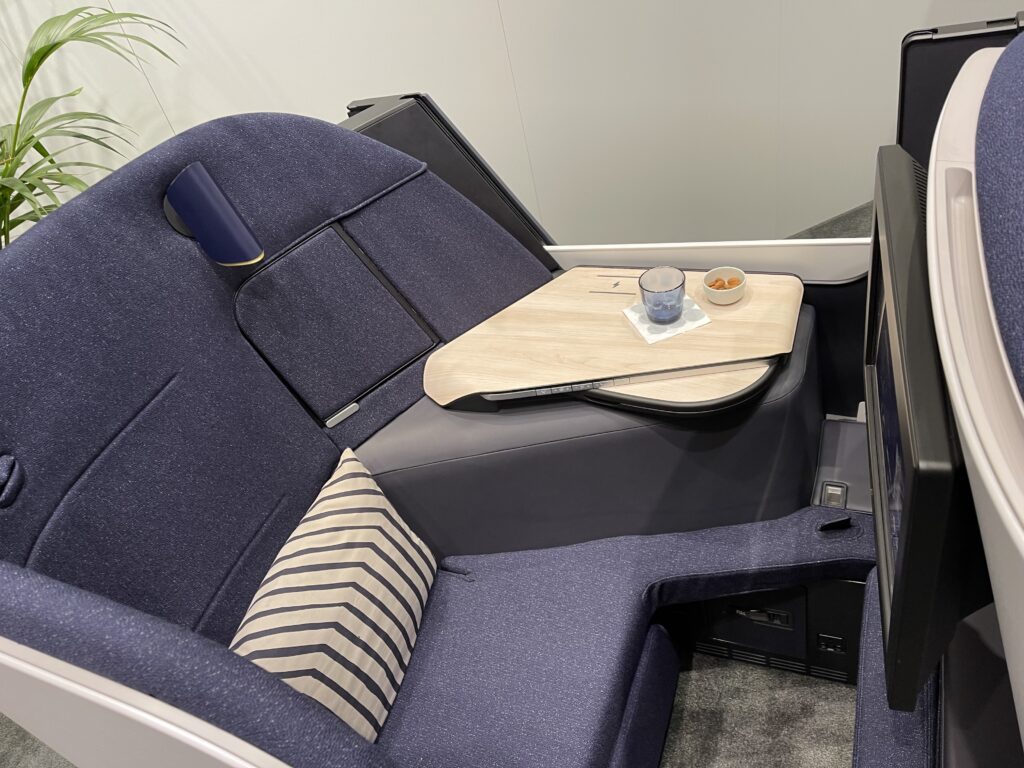 The look and feel will be primarily determined by the colour, materials and finish rather than drastic changes to the seat, largely for certification reasons, Hamilton explained.

Despite what an observer might initially think — that the forward-facing nature of the seat in taxi, takeoff and landing position would be relatively simple to certify compared with the new generation of strongly angled herringbone seating — the seatmaker had to overcome some new certification issues with this new kind of seat.

“It was very much a challenge to make it, because you’ve got a lot of the dynamics of that seat, the way it moves in the aircraft, the load piles are very different to a more conventional seat,” Hamilton said. “So that drives the way the seat behaves in the track: staying in the track, how it deforms into the aisles, how it deforms into the floor.”

This seems to have been one of the rare examples where real-world testing flags up new issues from a new seat that computer modelling can’t quite predict.

“You can do so much with FEA [finite element analysis] and get a good sort of approximation of what you think is going to happen, and then the rubber hits the road and things aren’t quite as perfect as you thought it would be for the modelling,” Hamilton told RGN. “But it has been a a journey to get to this point, for sure.” 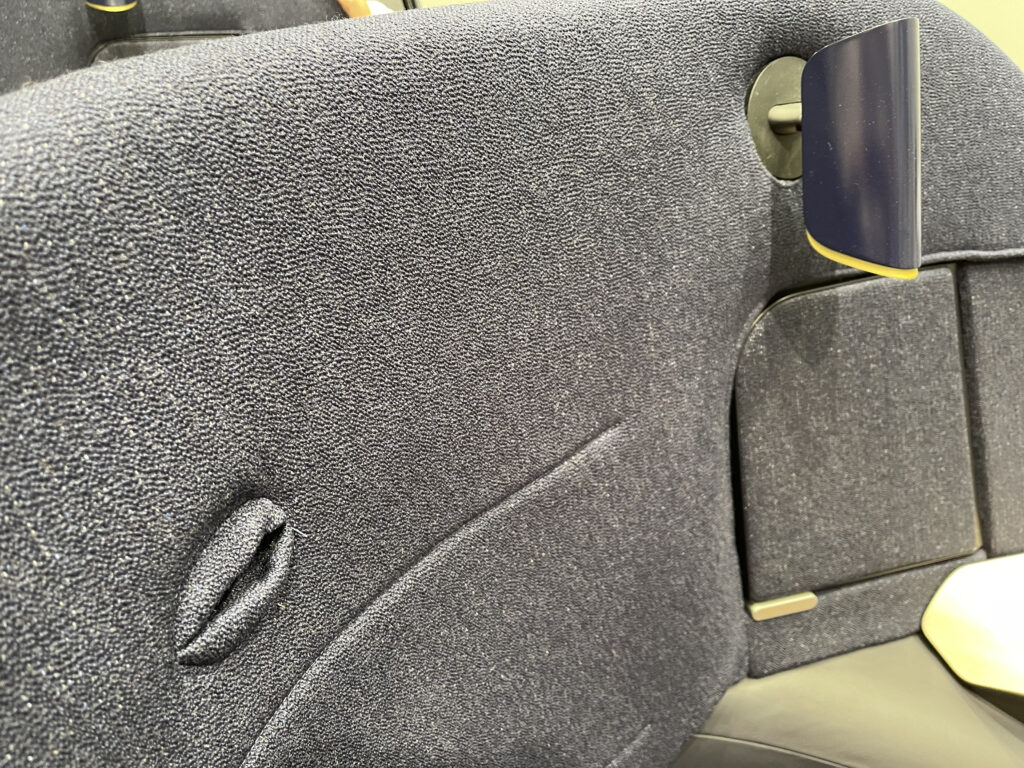