Do the world’s longest flights offer the world’s best passenger experience? Flyers might expect the latest and greatest seats on the longest flights, but as it turns out four of the eleven services on these routes don’t offer direct aisle access, four aren’t on the latest “plastic fantastic” carbon-fibre Airbus A350 and Boeing 787 with their lower cabin altitude and higher humidity levels, and quite a few offer seats that are older than a decade — some of which aren’t even planned to be replaced.

So let’s take a look at those longest flights, in descending order from the 8,285nm Great Circle route between Newark and Singapore, with their airlines and the aircraft that they use.

Singapore Airlines’ ultra-long-range A350s, like its regular longhaul version, offers a bespoke Jamco seat that continues the evolution of SQ’s business class seat that began with Koito and evolved in the Jamco partnership. It’s forward-facing in seat mode, but most passengers will end up sleeping on an angle with their feet in the cubbyhole to one side, which some passengers seem to be growing to dislike either earlier or later in the nearly nineteen hours of flight time.

Qatar Airways is widely considered to have the world’s best business class in its Qsuite, which I understand is installed on just over half of the airline’s nine Boeing 777-200LR aircraft, with the fully flat Minipod seat from Collins Aerospace (formerly B/E Aerospace) on the rest.

The Minipods are by no means modern, but they aren’t terrible as far as fully flat seats go in the wider 2-2-2 layout Qatar Airways uses: passengers who truly hate the “midnight clamber” from window to aisle can choose one of the centre pairs. But the Qsuite may be the best way to fly, and a huge upgrade in terms of space, privacy and features compared with the older seats — particularly for an eighteen hour flight. 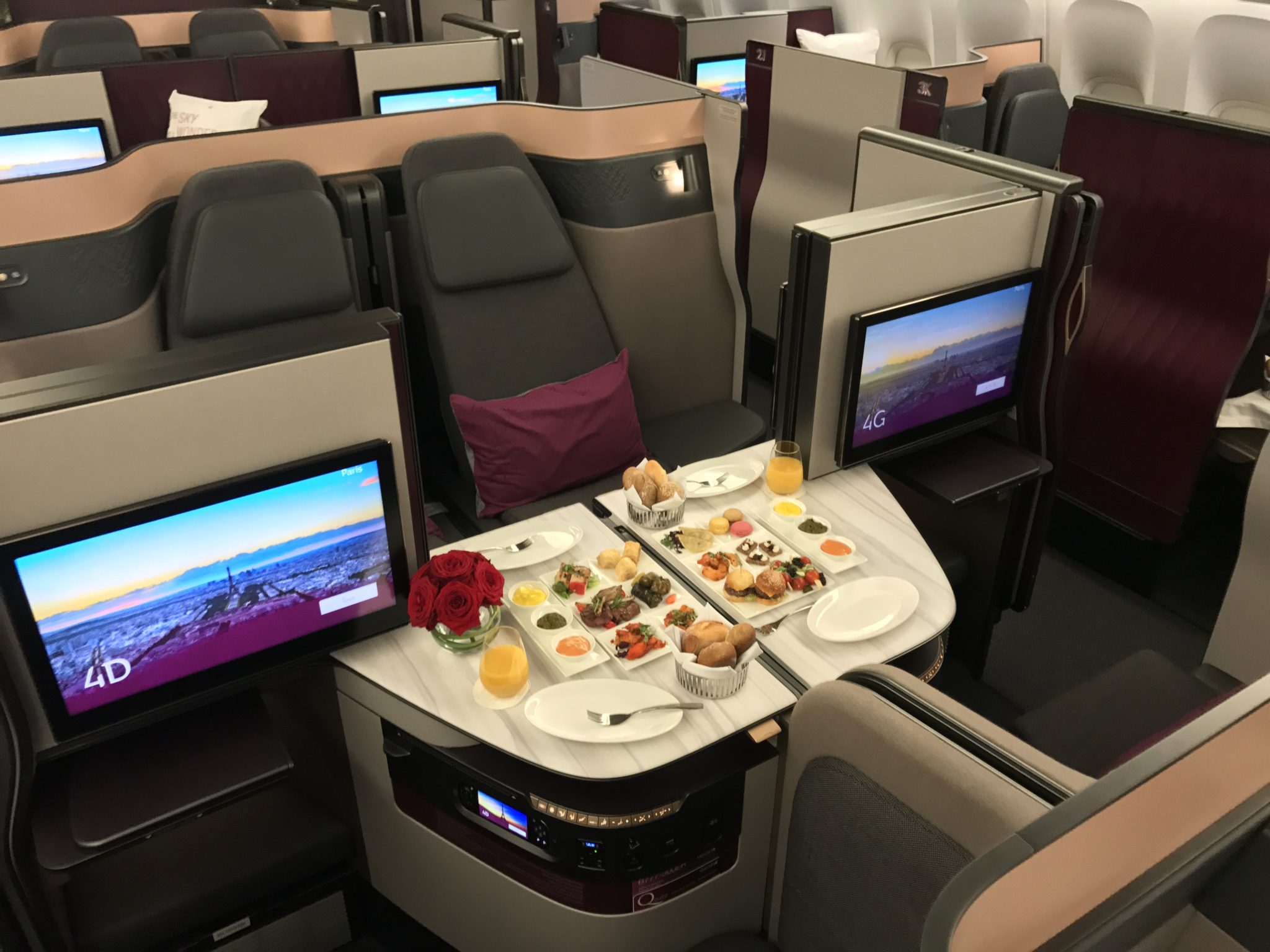 Qatar Airways’ Qsuite is the best business class in the world, but isn’t guaranteed on the world’s longest flight. Image: John Walton

Qantas’ Dreamliner (pictured at the very top of this post) offers a slightly updated second generation of its Thompson Vantage XL product, which débuted on the Red Roo’s recently refurbished A330s. It’s a solid product for longhaul, but the zero-sum problem and the relatively confined foot space would give this traveller pause at a flight time of over seventeen hours.

Emirates operated one-stop A380 services via Australia for years before going nonstop to Dubai in 2016, and there’s nothing unusual about its passenger experience here – rear bar, burled walnut overdose and all. The size and functionality of the bar on such a long flight is a huge advantage, while the privacy of the customized SKYlounge from Safran (formerly Zodiac) is above average for zero-sum staggered seats.

See above for Newark, but with better weather on departure.

With the worst passenger experience in business class aboard the world’s ten longest flights, it’s United Airlines, which offers the decade-old Collins Aerospace (previously B/E Aerospace) Diamond — United hasn’t even marked the -9 Dreamliner on its Polaris Tracker yet, let alone got started with any refits. 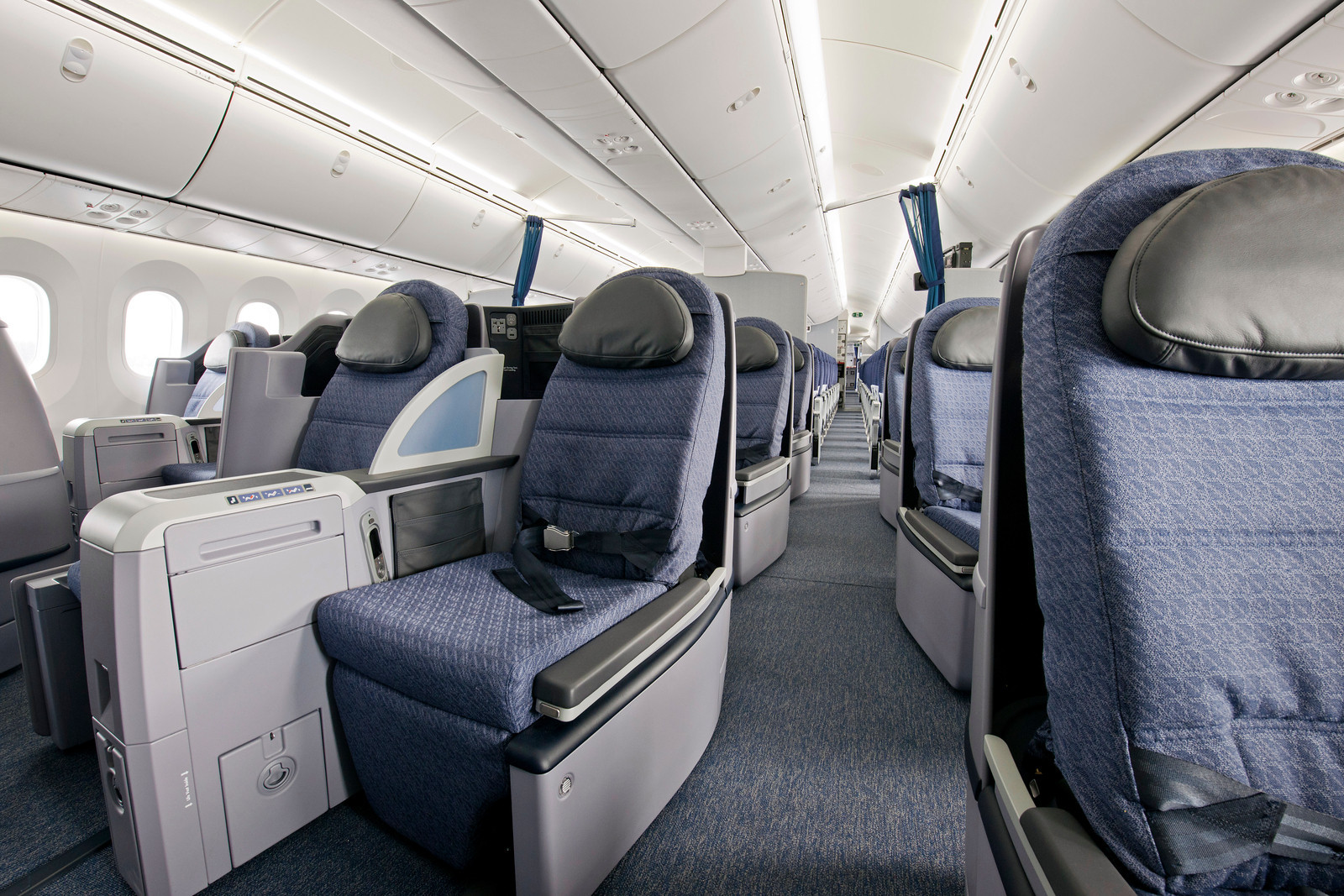 United offers Rockwell Diamond seats in business on its 787-9 in a 2-2-2 configuration. Image: United

It’s not a bad seat for a shorter flight, but the 2-2-2 layout and the fact that its foot cubby overlap makes it especially difficult for window seat passengers to clamber over their aisle neighbor to get out makes it a serious no for seventeen and a half hours.

Qantas is refurbishing its first A380, but until they’re all done it’s the decade-old fully flat bespoke Skybed in a 2-2-2 layout. Like Qatar Airways’ Minipods, this isn’t the worst fully flat out there, given that there’s no middle seat and that the midnight clamber isn’t the most difficult thanks to the lack of foot cubby overlap. Still, it wouldn’t be my first choice for seventeen hours.

Much like Qantas’ 787-9, PAL uses the Vantage XL seat that Lift Strategic Design customized for its A330s, but with the commensurately wider seats for the A350’s wider frame giving it a slight edge over Qantas’ narrower Dreamliner, though the zero-sum issue and foot cubby space remain less than ideal for ultra-longhaul flying. 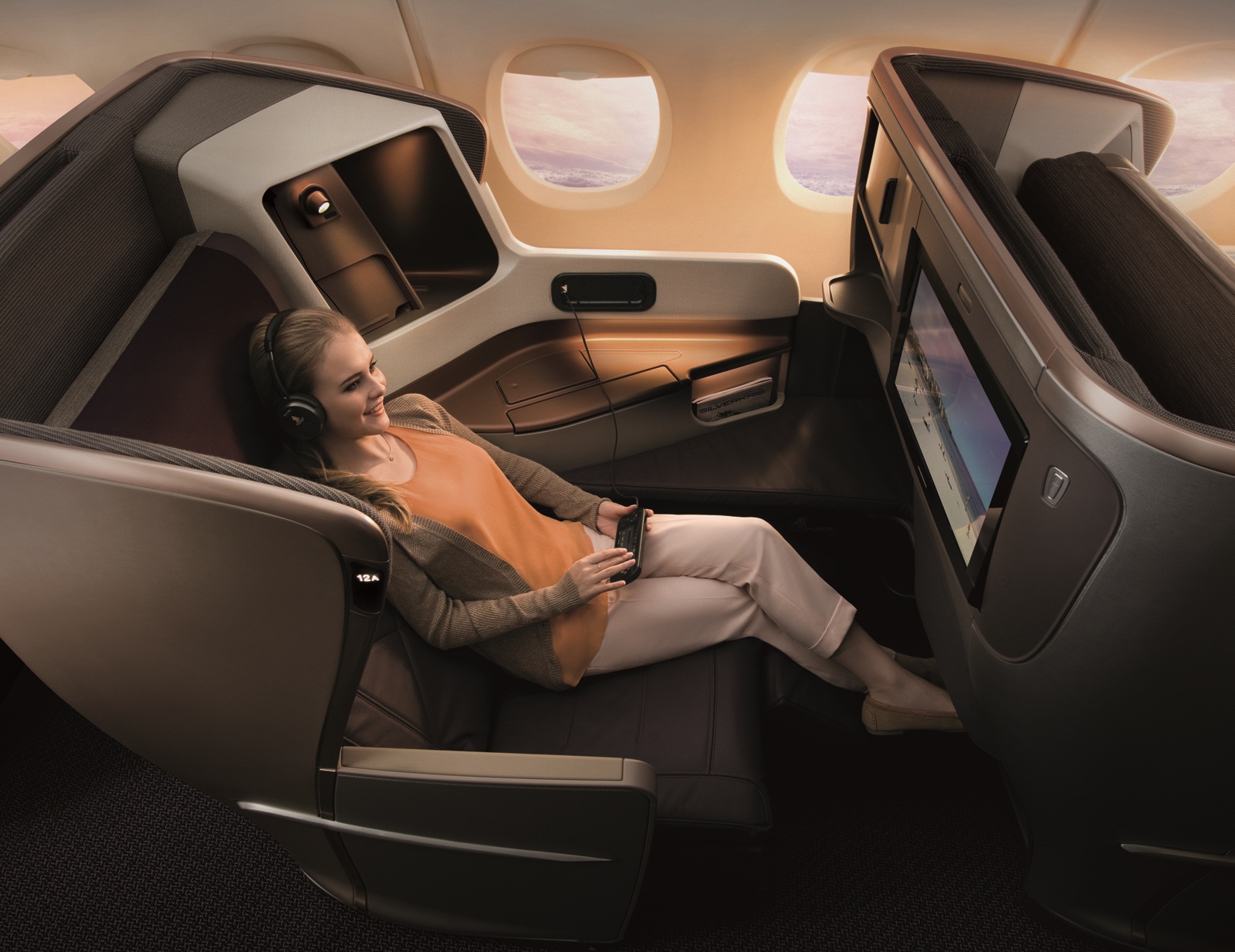 SQ’s A350 business class seat is an evolution of what’s seen on its other aircraft. Image: Singapore Airlines

I believe Delta only has one of its ten 777-200LR aircraft refitted with its Vantage XL+-based Delta ONE Suite, and indeed initially focused its rollout of the new product on its transpacific routes. In the meantime, it’s the inward-facing Solar Eclipse herringbone seat from Contour (now Safran via Zodiac) that caused such a stir with the Virgin v Contour lawsuit. Yes, the suite will be better, but the herringbone still offers direct aisle access, even if all the bells and whistles of a decade-newer seat will be very welcome on the ultra-long haul from Jo’burg. 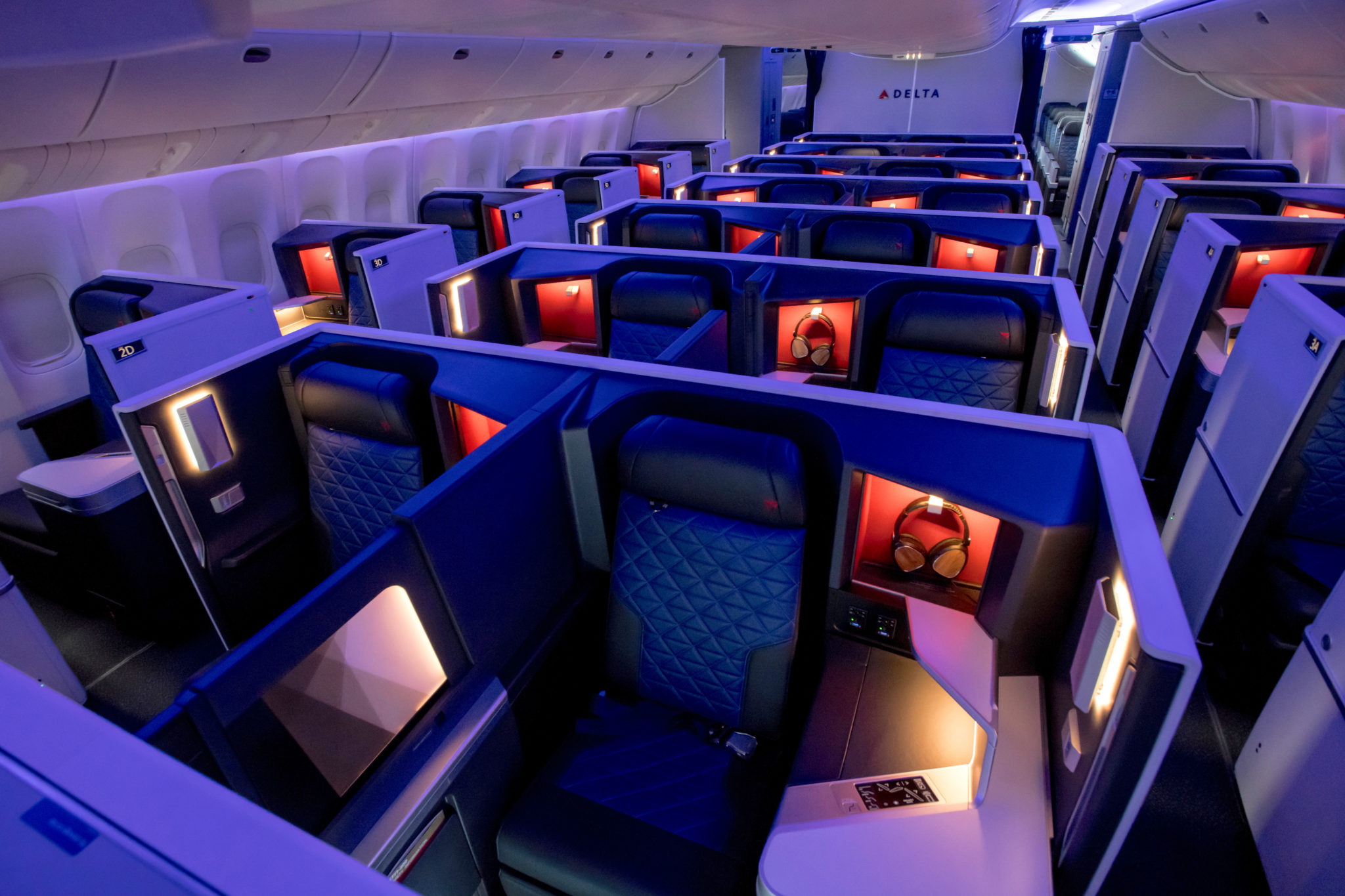 The Delta ONE Suite is by no means guaranteed on the Johannesburg-Atlanta route. Image: Delta

There are lessons from all these flights for airlines. For many passengers, perhaps even most in business class, the benefit of a nonstop flight may outweigh that of taking a more longer or connecting flight to find better passenger experience.

But for others, particularly the growing market of premium leisure passengers, the prospect of being on any aircraft for sixteen to nineteen hours is not one to relish, and even less so if better seats can be found on a connection that also allows for a good stretch, a shower, and perhaps even some fresh air.

As ultra-longhaul flying becomes more commonplace, and will continue to do so with improved efficient large twinjets, airlines need to think carefully about the passenger experience they offer when passengers are in the same place for almost a full day.

Press Release: Cobalt open for business in the US