Having sold more than 200 Airbus A330ceos through the end of May since the launch of the new engine A330neo program, the European airframer says it has no end date in sight for production of the current generation widebody.

Yet it also expressed no concerns about the state of A330neo sales during a media briefing last week in Chicago, before the twinjet flew to Atlanta and completed its route-proving tour in advance of “imminent” certification.

Decked out in TAP Air Portugal’s livery and interiors, the production aircraft used in the flight-test program is expected to be delivered to the European operator in September, and offers a step change improvement in the passenger experience.

Airbus recently saw a small boost to the A330neo backlog with a 10-aircraft order from an undisclosed customer. But multiple media reports suggest the airframer is fighting to formally nail down and expand its existing order from AirAsia for the low-cost, long-haul AirAsia X brand. 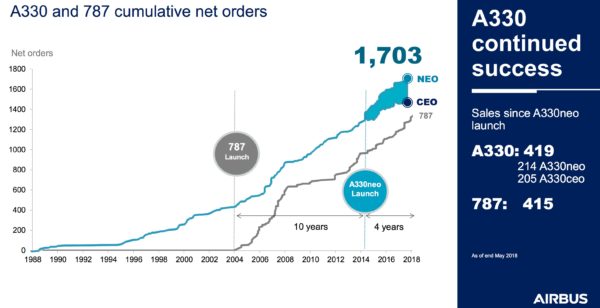 The current generation A330ceo continues to attract orders, and contributed to nearly half the sales of the A330 since Airbus launched the Trent 7000-powered A330neo. Image: Airbus

In unleashing the full center fuel tank with the 242-tonne A330-300, Airbus “made the plane so capable that it arguably hurt sales of the A330-900”, posited RGN contributor Gavin Werbeloff on Twitter.

But Airbus execs at the briefing in Chicago noted that the production lines of the A330ceo and A330neo run parallel, and Airbus does not have a timeframe for when it will stop the A330ceo. They pointed to continued military derivatives of the A330ceo, and freighter demand.

Notably, Airbus continues to include AirAsia X as an A330neo customer in its slide deck. Slide: Airbus

A step change in #PaxEx

From a passenger experience perspective, Airbus is convinced it has a winner on its hands with the A330neo. When developing the interior, Airbus invited airlines to customer focus groups, and they told the airframer they wanted “a similar cabin to the A350”, but not pivoting overhead bins, said Ustupska.

That’s why Airbus is offering the lighting and customization of Airspace, which originated on the A350, but adopted a large fixed bin for the A330neo because airlines saw it as “a really good idea, it’s very easy on maintenance and it wouldn’t intrude onto any passenger space”.

Added Ustupska: “We looked at the fuselage geometry [of the A330] and we found some space behind [it] so we were able to basically move the bin a couple of degrees and we have basically made it deeper [for the A330neo].” That means that if passengers load their bags longitudinally, you can put five bags in the A330neo bin instead of two or three bags. 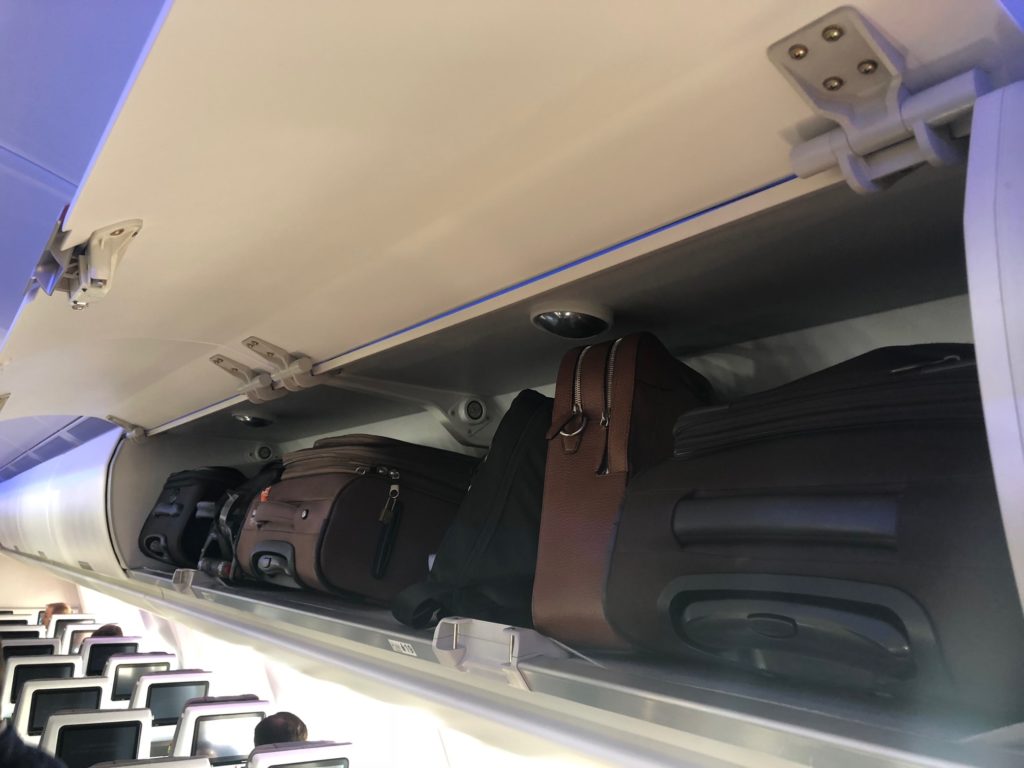 A new modular Smart-Lav on offer from Airbus can optimize space on board the A330neo, though TAP Air Portugal has not selected this option to densify with more seats.

Airlines which want to accommodate passengers with reduced mobility (PRM) – or are compelled to do so by regulators – have the option of selecting a large-footprint lavatory, or they can adopt side-by-side lavs integrated into the A330neo’s rear galley and lavatory complex, and which open in the middle to provide a swinging partition between the two to ensure maneuverability. The design is similar to one of the two PRM lav options on offer through Airbus’ Space-Flex configuration for the A320.

Ustupska said Airbus found space not utilized on the A330 to accommodate the two-lav, rear-complex solution on the A330neo. “So today, if you have 16 trolleys, with the neo you can have 15 trolleys plus two lavatories. It means that it’s an extremely efficient configuration to have and on top you have the PRM function. It means that you are really using the revenue area to earn money.”

Journalist @petchmo of @flightradar24 shows us how the PRM accessible lavatory works on the Airbus A330neo which will be delivered to TAP. It’s a similar concept to the PRM lav on some A320s. #PaxEx #accessibility #a11y #avgeek pic.twitter.com/NbxcJeMnOW

Unfortunately for PRMs, not all countries require airlines to offer accessible lavatories. “If an aircraft is flying to the US, it’s compulsory. There are countries that are not imposing these rules on airlines and we have layouts where a PRM lavatory is nonexistent,” confirmed Ustupska. But if they choose the rear-complex solution, the PRM lavs will be “there by default”.

When airlines select the standard configuration for the A330neo, in three classes, the -900 seats 287 passengers and the -800 seats 257 passengers.

The standard eight-abreast layout in economy class equates to a comfortable 18” seat width for passengers, though Ustupska conceded that long-haul, low-cost carriers – which gravitate towards high-density seating configurations – are poised for growth.

As has been well reported, TAP selected Recaro CL3710 slimline seats for its 2-4-2 economy cabin and is featuring an extra legroom economy section rather than a dedicated premium economy class. 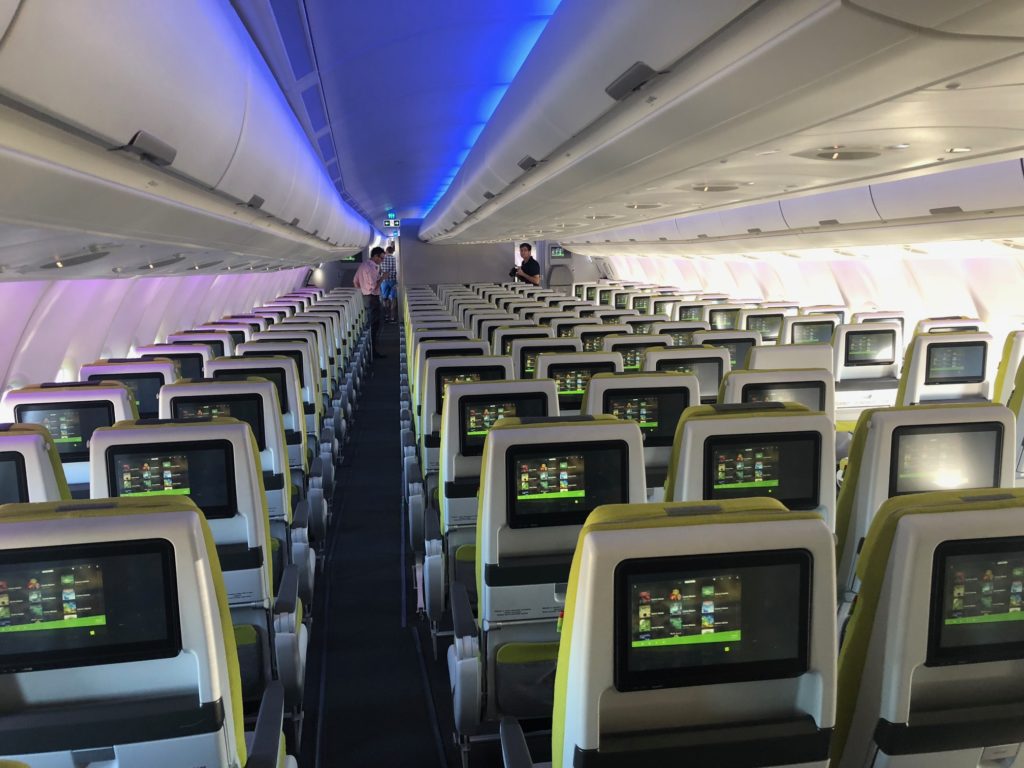 When economy class passengers fold up their armrests, the armrests do not jut out, but rather lie flush against the seat architecture. This makes it easier to sell two seats to a passenger of size or a disabled passenger, or for travel companions to share that space. And it remedies a problem seen on other aircraft, including the Recaro seats on Qatar Airways’ original 787s.

The Panasonic inflight entertainment (IFE) system on board the TAP A330neo is fully integrated and electronics boxes do not encumber the legroom of economy class passengers. As on the A350, Airbus was keen to ensure a more integrated IFE experience for passengers on the A330neo.

TAP picked Recaro’s new compact CL6710 model for its business class cabin. The Portuguese carrier was originally expected to be the launch customer for the CL6710, but Recaro actually ended up launching it last year with El Al, and it has secured both China Southern and Azul as customers as well, Recaro communications and marketing specialist Joe Snell told Runway Girl Network.

In TAP’s business class, passengers can use their IFE monitors gate-to-gate without cranking their necks. “We had to go through special certification so you can adjust your monitor when you get on your airplane. You don’t have to worry about the altitude,” noted Snell. 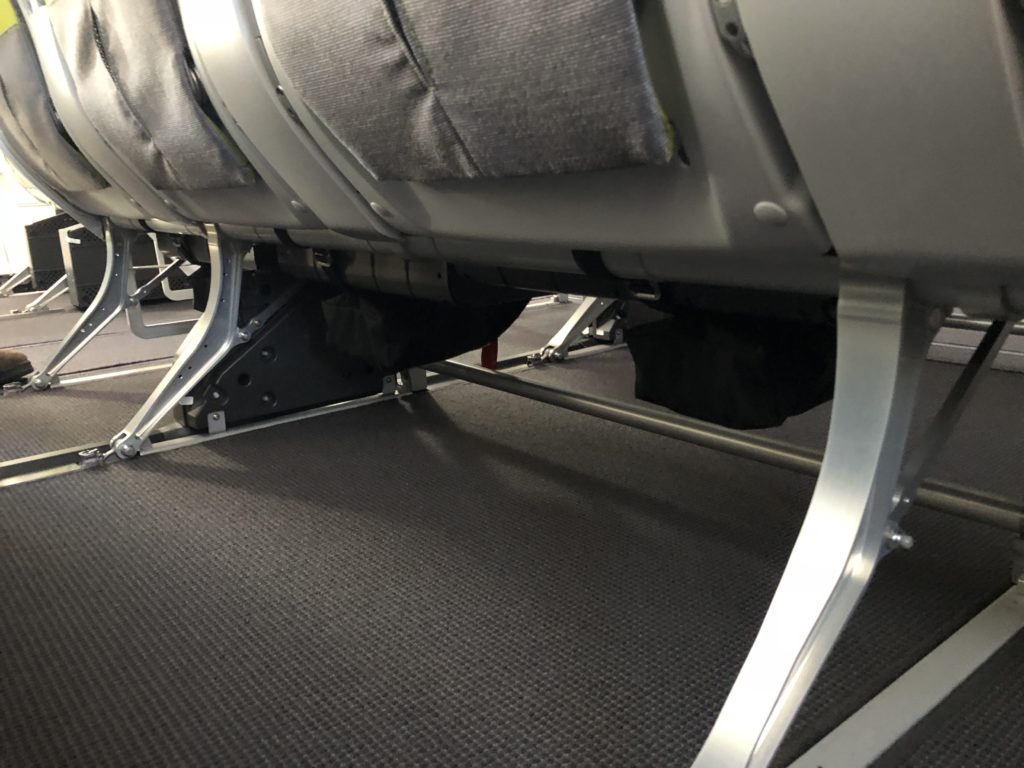 Airbus has timed the A330neo for the A330ceo replacement market, but it would also like to see the type replace Boeing 767s and older generation 777-300ERs. It views the A330neo as a competitor to the Boeing 787, with fuel burn touted as being akin to or even better than the 787.

A replacement and a competitor

But more broadly, Airbus head of external communications James Darcy said in reference to the A330neo interior: “At the end of the day we’re selling the experience to the airline passengers, that’s the final user of the product.”

At a time when Delta Air Lines has just bucked industry trends and opted to retain a comfortable 9-abreast layout on its refurbished Boeing 777s, it’s clear that some passengers are paying more attention to #PaxEx than ever before. That could prove good news for those airlines that offer humane conditions on board, such as found on the eight-abreast A330neo with new bins, IFE and Airspace cabin attributes. 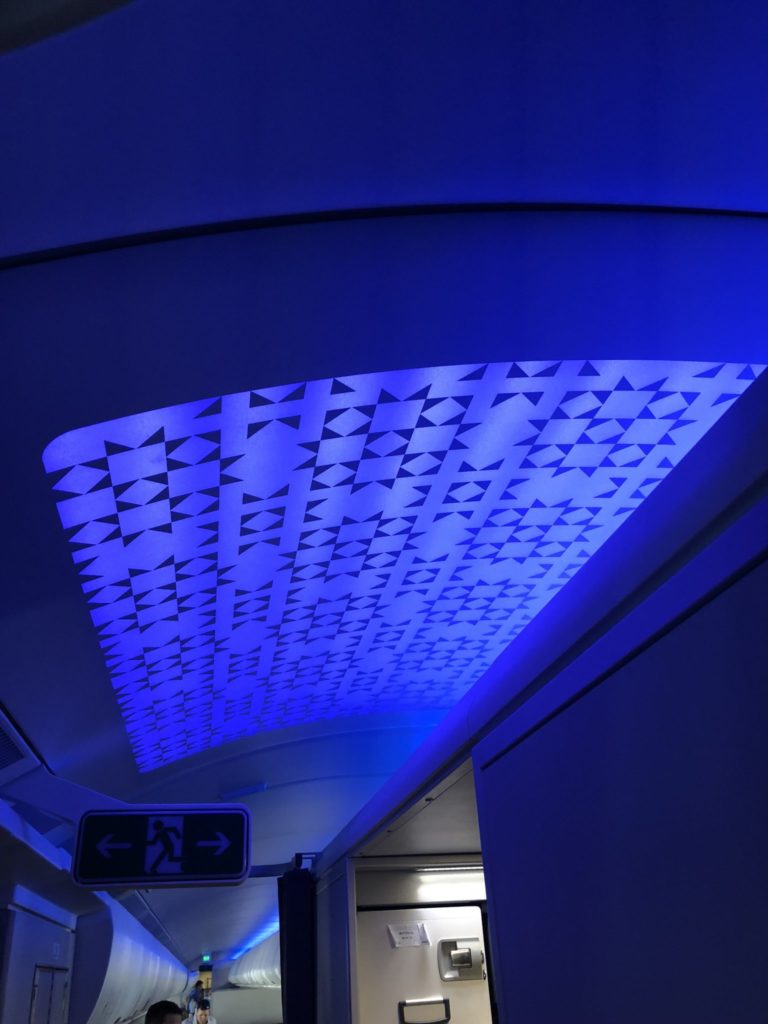 The new entryway on the A330neo allows airlines to really wow their passengers with etched designs and LED lighting, as TAP has decided to do for its configuration. Image: Mary Kirby

Disclaimer: The author was a guest of Airbus for both the briefing in Chicago and on the Chicago-Atlanta test flight. Airbus provided roundtrip transportation and an overnight hotel stay. All accounts, descriptions, or observations of the flight belong solely to the author.