Photos of the International Air Transport Association’s nearly all-male board of governors at the recent Annual General Meeting in Sydney provided a reminder to the aviation industry of its woefully poor efforts to promote women to the C-Suite. To make matters worse, a panel of six guys in suits debated what to do about the ‘woman problem’ in aviation during the event.

Women throughout the industry, including contributors to Runway Girl Network, made their opinions known on social media, with the aim of helping to forge a new future for the industry. Given this fresh push for gender equality in aviation, the Women in Aviation International’s Girls in Aviation Day 2018 is not only timely, it has taken on a new level of importance. 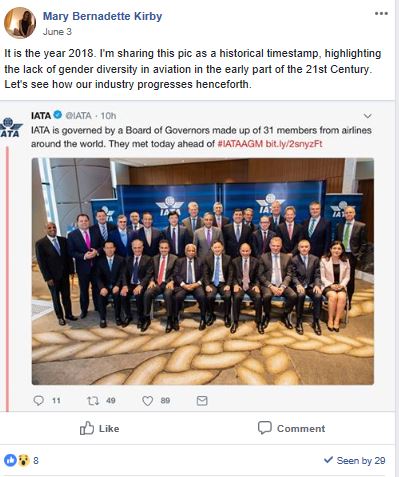 A quick look at the planned activities for the Girls in Aviation Day, scheduled for 13 October, reveals the breadth of activities being hosted by WAI chapters around the world. Indeed, the list leads with Botswana and encompasses India, Nigeria, and Kenya in addition to Ireland, Germany, Netherlands, the UK and the US.

The US alone has 44 events planned and, if you don’t see one near you, you can go online to participate in Embry-Riddle Aeronautical University’s (ERAU) online event, also listed on the Women in Aviation (WAI) web site.

These global events are complemented by a special Girls in Aviation Day held each year during the WAI annual conference. Next year the conference is scheduled for 14-16 March in Long Beach, California. 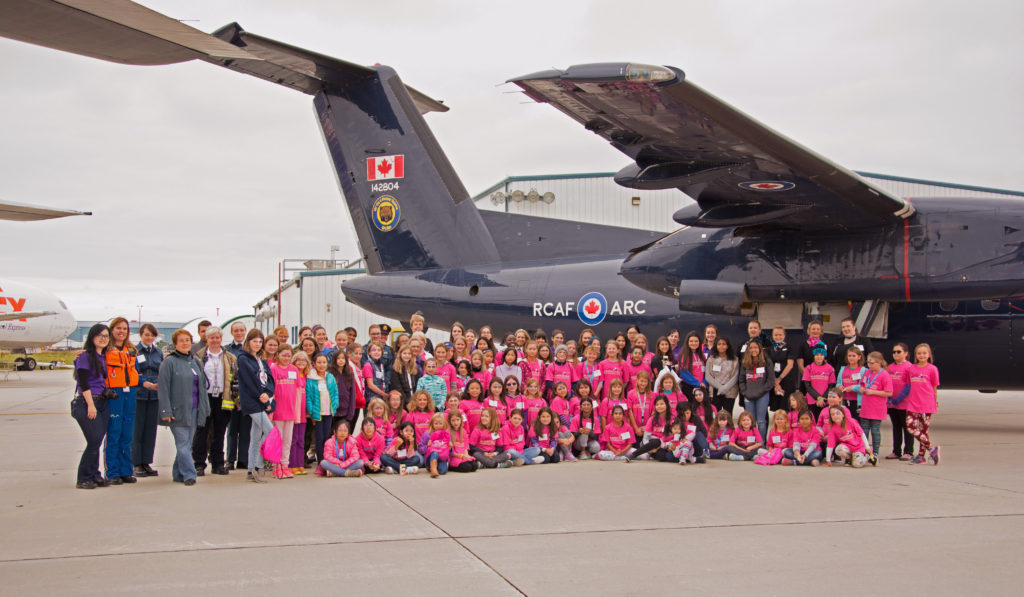 An estimated 9,700 girls participated in the 74 Girls in Aviation Day events held worldwide in 2017 and WAI hopes to best that number this year. The organization estimates it has had more than 18,450 girls go through a GIAD event in the four years since it was established in 2015.

“The events reflect the diversity of the WAI membership, both in location and in the variety of planning groups, featured events and professions, activities and culture,” says WAI spokesperson Molly Martin. “We have airport managers, engineers, teachers, air traffic controllers, GA, military, corporate and airline pilots, members of the military, flight attendants, and quite a few corporate members, all planning and executing the events. Some events are at museums, some at airports, some at aviation businesses, some at colleges and universities.” 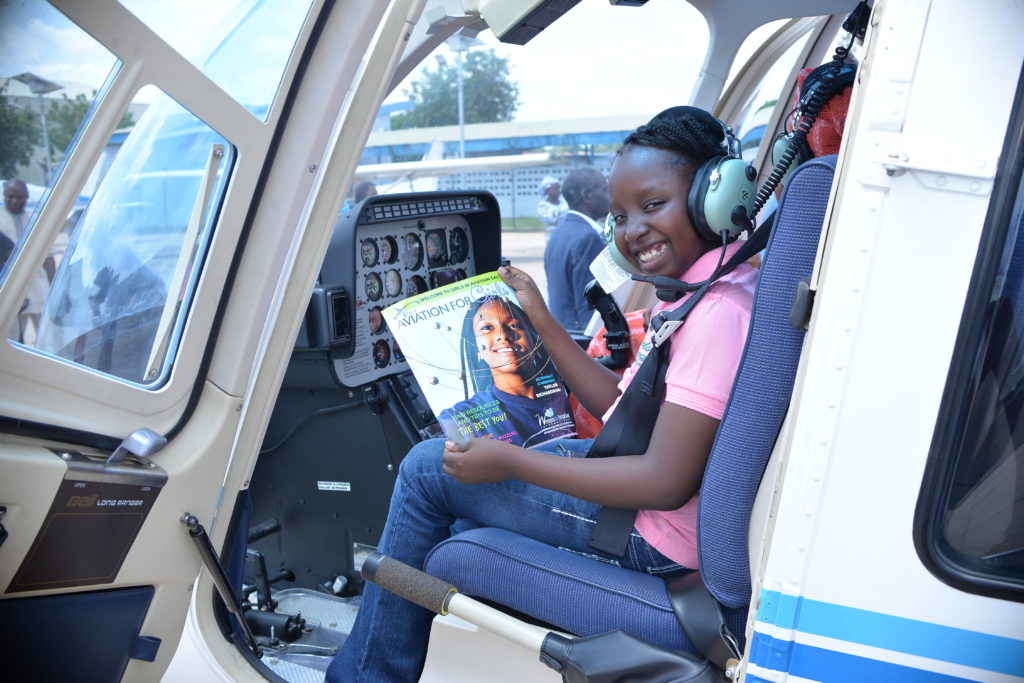 Young girls from all over the world are introduced to the aviation world. Image: GIAD/WAI

With no other theme than connecting girls to aviation, WAI leaves it up to the individual chapters to develop the activities.

“Each chapter and corporate member has the freedom to bring their own culture, flair and focus to the event. We see a broad level of diversity across the world in the presentation of aviation and aerospace opportunities. Chapters and corporate members also provide critical information about how to take their interest to the next level with information on scholarships, education, industry, role models, and the WAI mentorship program,” says Martin.

The WAI Kenya Chapter event will be held at Wilson Airport in Nairobi. Event Leader Una Gertrude says the event is designed to provide networking, education, mentoring and scholarship opportunities. Participants will tour a hangar at the control tower. Organizers are also hoping to get volunteer pilots to offer flights.

“Our aim is to have a networking platform that can provide solutions to members who are looking for growth and placement in aviation,” she tells Runway Girl Network. “WAI have made me grow by allowing me to engage with experts within the industry. It is important to encourage the girls to pursue various careers in aviation since we do have a few ladies in the technical areas. When I joined the industry no one mentored me so I know the importance of mentoring young girls who want to pursue careers in aviation. I have found it rewarding especially after creating awareness and mentorship/networking platforms like WAI.”

Gertrude pursued flight dispatch as a career, despite dreams of becoming a pilot. “I couldn’t get funding and opted to pursue flight dispatch,” she says. “Immediately after the completion of my studies, I secured a job in Tanzania. After two years I went for further studies and it was at this point that I discovered Women in Aviation International. Together with my friend Fiona we founded WAI’s Kenya Chapter.”

Rejoice Ndudinachi, president of WAI’s Nigeria Chapter, has planned an airport tour and meetings with women in aviation role models. Participants will also visit the forecast office, navigational aids and the control tower.

“The essence of the program is to encourage the young ones to take up career in aviation. We want to catch them young,” says Ndudinachi, who is an ICAO Aviation Security (AVSEC) Professional Manager as well as being an ICAO AVSEC Certified Instructor. “We need people to take over from us. It is important for national development. For those that want to become medical practitioners, we make them understand that there is opportunity for them in aero medical. We make sure no girl, no profession is left behind for aviation careers. I have great passion for my profession and aviation and I want all women to know that they can succeed in this male dominated environment. A loud cry from women marks us in this field.” 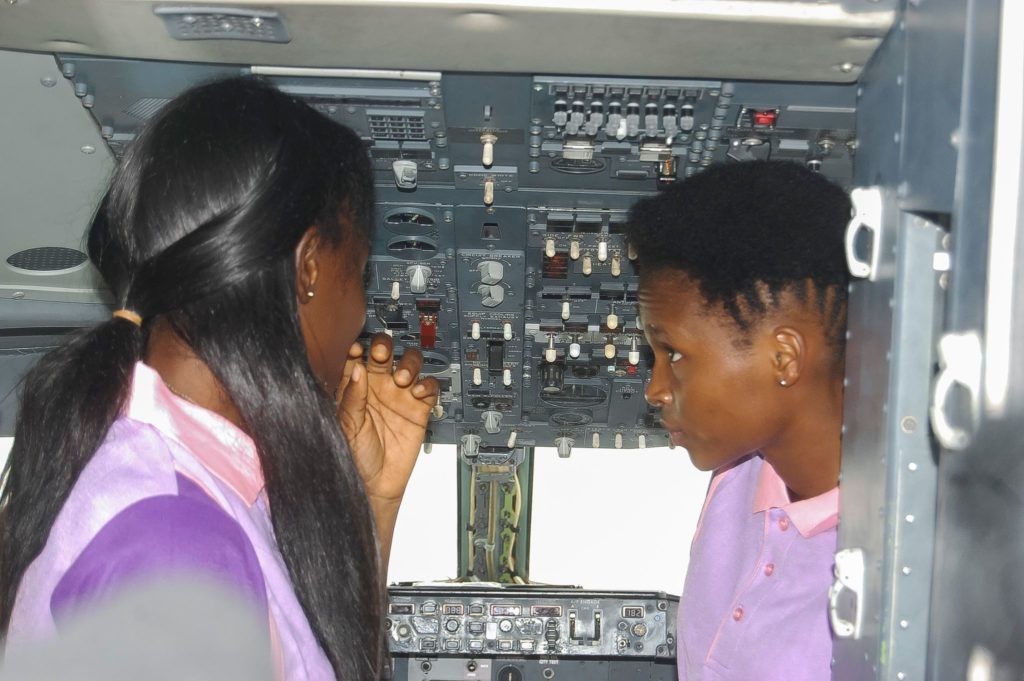 The Nigeria Chapter of Women in Aviation is among the WAI groups worldwide planning a Girls in Aviation Day event in October: WAI Nigeria