The US National Transportation Safety Board is issuing eight new remarkably strong recommendations to the Federal Aviation Administration about what it calls “insufficient” actions to ensure safe cabin evacuations, following a Board meeting regarding the October 2016 engine failure of an American Airlines flight in Chicago.

Training failures by American Airlines were also identified around engine ground fire checklists and flight attendant training, with the NTSB stating that “American Airlines did not adequately train flight attendants qualified on the Boeing 767 to effectively use the different interphone system models installed on the airplane during an emergency.”

It is a testament to commercial aviation’s principles of continuous and ongoing safety improvement that 161 passengers, 7 flight attendants and two pilots on board all survived, although 21 were injured, one seriously, during the evacuation.

Notably, only one of the type A doors (1L) and two of the type III overwing exits were used in the evacuation, fewer than the 50% of doors tested during certification procedures. American configures its 767-300ER aircraft in a 209-passenger layout, and the 161 passengers comprised just 56 percent of the maximum passenger count of 290 for -300 models with two pairs of type A doors and two pairs of type III overwing exits permitted by the FAA. 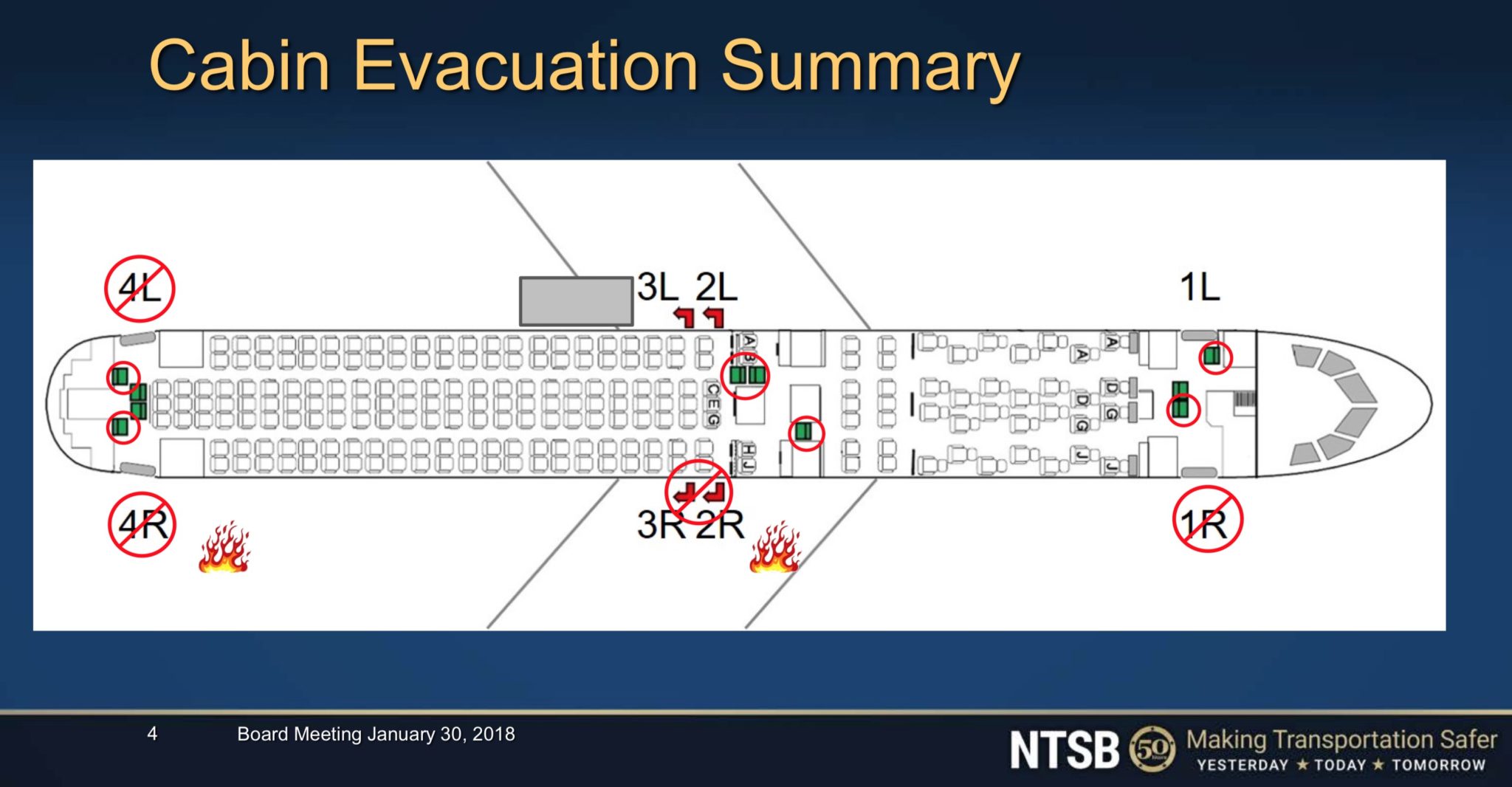 Only three of the 767’s eight exits were usable during the evacuation. Image: NTSB

However, the relatively low density and load factor of this 767 means that this incident will be of little reassurance on the subject of ongoing concerns about emergency egress on higher density aircraft.

The NTSB identified that American Airlines’ checklist for engine fires, based on Boeing’s procedures, “delayed the flight crew from initiating the evacuation checklist, shutting down the left engine, and commanding an evacuation”.

“Normally, the cabin crew would communicate with the flight crew to coordinate. But in this accident, there were no communications between the cabin and the cockpit before or during the evacuation. As a result, flight attendants initiated the evacuation with the left engine still running. The one seriously injured passenger was blown over by jet blast from that engine,” Chairman Robert Sumwalt said.

The NTSB’s warnings and official recommendations on flight deck-cabin crew communications — including following three other incidents in the past two years — have not been heeded by the FAA in a way that satisfies investigators.

In this incident, “the flight crew did not communicate with the flight attendants to relay its intent not to immediately evacuate. Even with an unfolding emergency, there should have been better communication between the flight and cabin crews,” the NTSB said.

However, the FAA has not yet acted on a 2009 safety recommendation to revise related guidance (issued in 1988) to reflect the most recent industry knowledge on the subject based on research and lessons learned from relevant accidents and incidents. In addition, the FAA has not yet established a multidisciplinary working group, in response to a 2016 recommendation, to develop best practices to resolve recurring evacuation-related issues. It is time for the FAA to emphasize the importance of ensuring that flight and cabin crew communications can facilitate safe and effective decision-making and action during emergency situations.

The sole serious injury to a passenger occurred after they evacuated over the left overwing exit, which a flight attendant had opened despite the left engine continuing to operate. The passenger was knocked over by the jet blast from that engine, which had not been shut down by the flight deck.

American’s training didn’t include both its types of interphone

Before and during the evacuation, flight attendants both could not recall how to use the interphone and operated the interphone incorrectly, the investigation revealed.

Astonishingly, according to the NTSB, “the interphone system model installed on the accident airplane was not installed on American Airlines’ 767 simulators used for flight attendant training.” 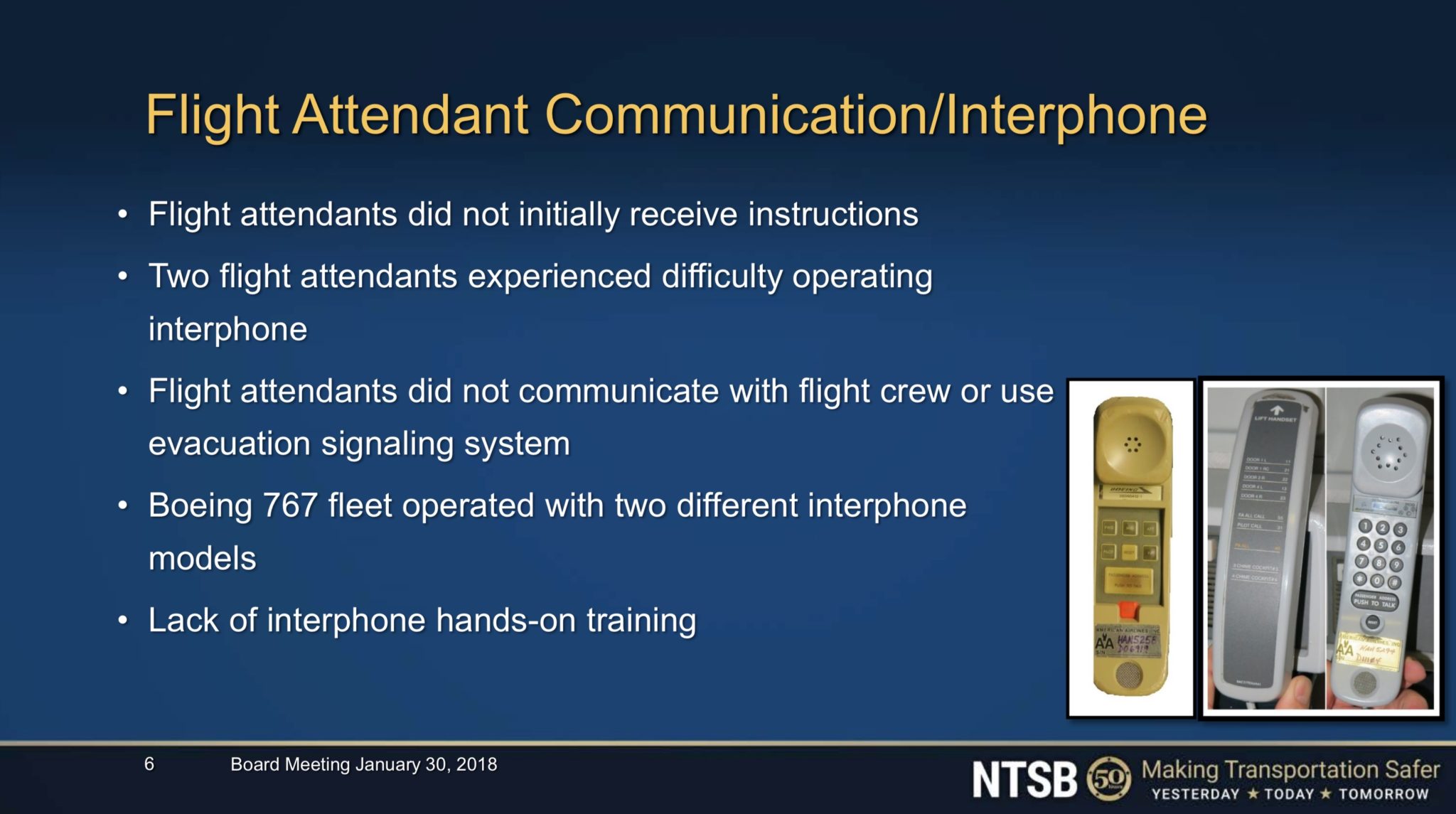 The interphone issue raised by the investigation is particularly troubling. Image: NTSB

American’s 767s, which come from a variety of pre-merger sources have different interphone models, and have seemingly not been standardised.

With carriers continuing to acquire aircraft via the second-hand market, mergers, and bankruptcies, this incident should ring alarm bells in airlines’ safety departments around updating and standardising procedures and equipment to ensure crews are trained on the full range of an airline’s subfleets.

The NTSB issued a new recommendation to the FAA that it review all airlines’ training programs to “account for the different interphone systems that air carriers operate”.

The NTSB’s previous recommendations to the FAA on evacuations have not been acceptably addressed, with the Board issuing several damning statements, including:

The Federal Aviation Administration’s inadequate actions to improve guidance and training on communication and coordination between flight and cabin crews during emergency situations, including evacuations, could lead to negative consequences for the traveling public if this safety issue continues to be unresolved.

Evidence of passengers retrieving carry-on baggage during this and other recent emergency evacuations demonstrates that previous Federal Aviation Administration actions to mitigate this potential safety hazard have not been effective.

Calling the FAA efforts to address communications issues in particular “insufficient”, the NTSB also highlighted the ongoing problem of passengers evacuating with carry-on luggage, where it has also made recommendations to the FAA.

The FAA’s lack of action to ensure passenger safety continues to trouble many in the airline industry. It will be also be surprising to some that the NTSB’s crucial, life-saving work, is not classified as “essential”. The meeting with these stark recommendations was delayed by a week owing to the January government shutdown. It is unacceptable that aviation safety investigations are delayed by government politicking.