Qantas’ London lounge is a fascinating beast. A month into its existence, the lounge is settling in nicely, and is rivalling Cathay Pacific’s business class lounge for the best oneworld option in Terminal 3.

The food options are excellent, and I was delighted to arrive a few minutes before the 11am breakfast cutoff prior to the Melbourne flight’s departure, and very much enjoyed an egg Benedict.

(Yes, egg; the menu is plural but the cuisine is singular.)

Great egg Benedict at the @Qantas lounge in Heathrow, but I remain unconvinced by the new signature plate, which just looks grubby. #PaxEx pic.twitter.com/Mdu3KdFPW6

Friends raved about the help-yourself smoked salmon station upstairs, and my three-year-old god-daughter gave two slightly sticky thumbs up to the fresh strawberries with clotted cream that also featured on the well-stocked and appealing buffet.

On the subject of kids, there’s a little corner in the lounge with a few wipe-clean toys, and the staff revealed when I was chatting with them that the VIP rooms (usually reserved for Chairman’s Club and celebrities) are also available for families with little ones who aren’t happy to sit quietly and watch the planes taking off from the lounge’s windows.

Coasters are bang on the social trend, with both hashtags and @Qantas highlighted. The large staircase does rather feel like it is crying out for an Instagrammable work of art, though: perhaps a Qantas roo or a map of the Kangaroo Route? 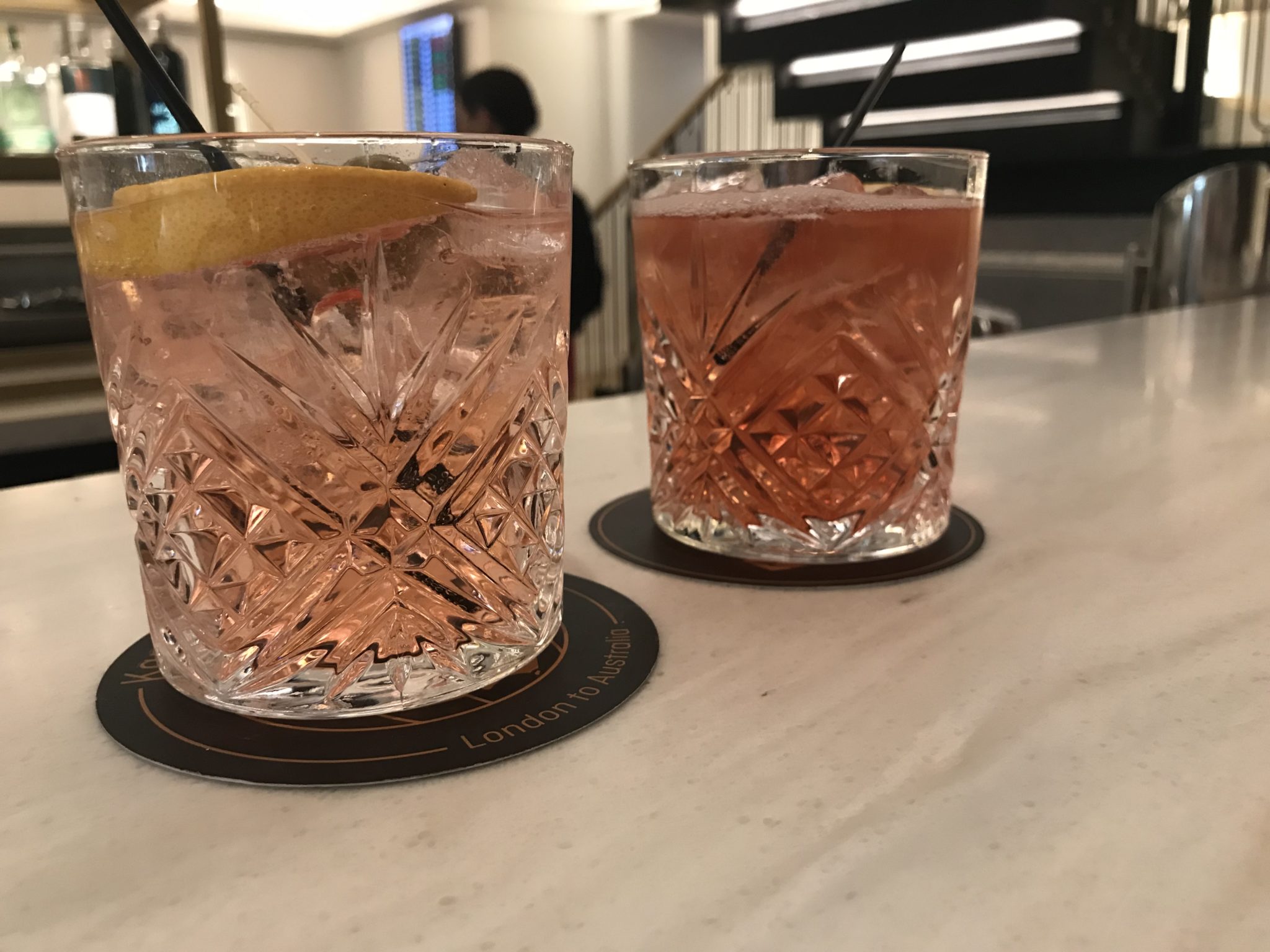 The staff throughout the lounge were uniformly delightful, which is very on brand for Qantas and very unusual in London Heathrow, where few other airlines across the four current terminals can boast a team as genuinely lovely as Qantas’. Nametags highlight that the staff are provided in partnership with Sofitel, and I was pleased to see that my favourite bartender from the Cathay Pacific lounge has been headhunted into a supervisory position with Qantas.

The gin bar is smashing, with a range of gin suggestions on the menu as well as a decent wine list. I was pleased to note that staff ask passengers whether they want a single or a double rather than just automatically pouring the latter.

I remain a little baffled as to why there are relatively few accessible power points in the lounge, since most other airlines these days are ensuring that each seat has one AC power and one USB socket at a minimum.

Battery anxiety is real, even for those lounge guests flying business or first class, and Qantas fully expects to offer the lounge facilities to other partner passengers like British Airways and Finnair, whose flights largely do not provide at-seat power. 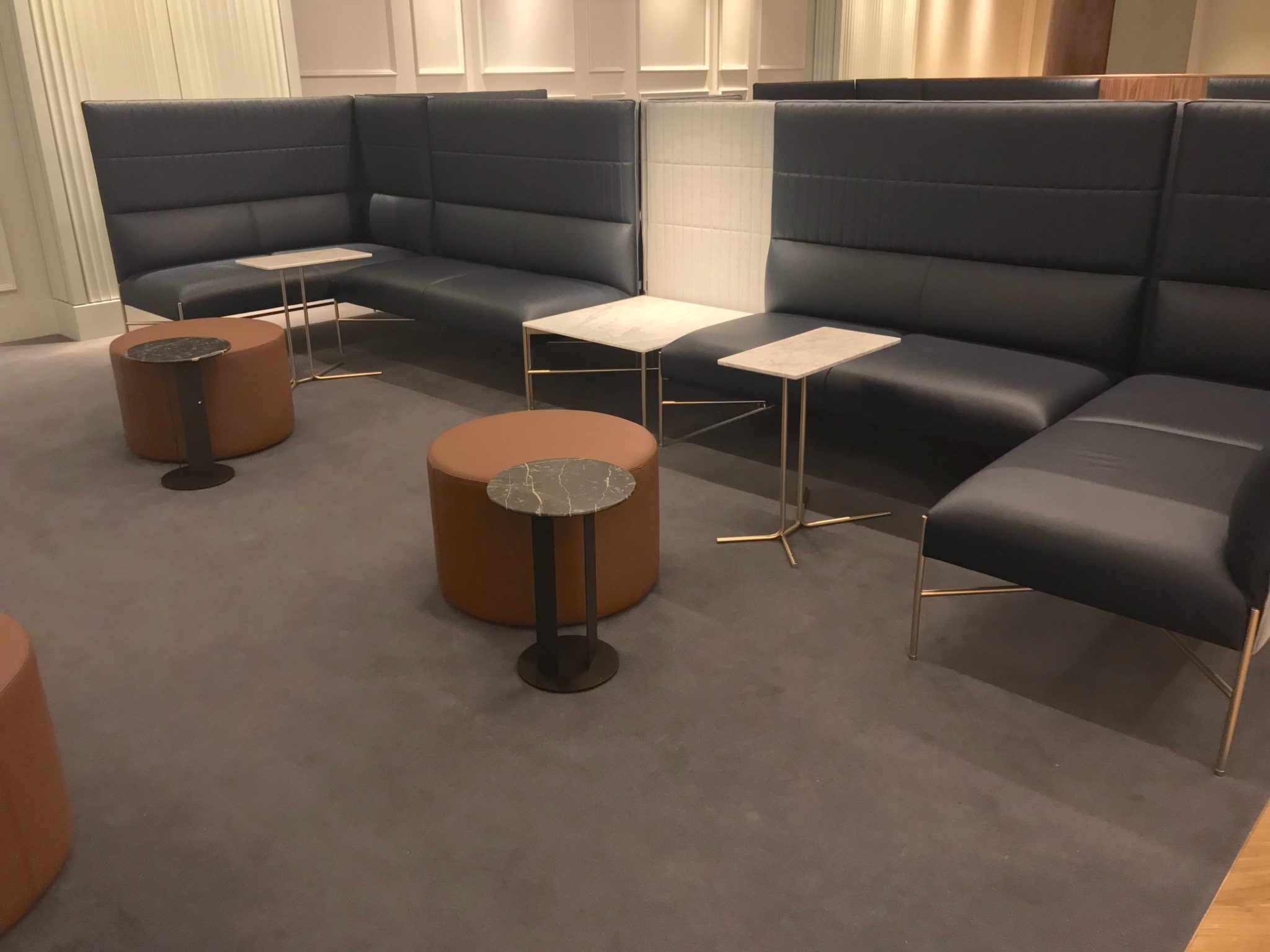 These white marble effect tables were excellent for tablet use, but they weren’t near plugs and there weren’t enough of them. Image: John Walton

Similarly, the range of tables and their locations didn’t offer what I’m rapidly coming to see as the holy grail of the modern lounge: a comfortable chair, accessible power sockets, and a table big enough for a plate, glass and laptop or tablet.

The wifi was frustratingly slow for 2017, with a fairly measly 4Mbps up and down. Given that Qantas has no wifi serving Heathrow, this is a big miss — although it is a fair introduction to Australia’s largely glacial home and office connectivity.

Quite underwhelmed by the Qantas London Lounge #LoungeMegabits given that it’s a brand new space — and that the airline has no longhaul connectivity. pic.twitter.com/kIWarZZXsL

I was disappointed to hear that the signature Miranda Kerr tea service is underprovisioned, with only a couple of the so-kitsch-they’re-cool teapots available, so tea is served with a floral cup but from the new David Caon-designed Qantas tableware.

I’m not sure about the “grey ink motif” on the David Caon plates either: as I thought from the PR shots, it unfortunately resembles a set of very grubby fingerprints.

And first class passengers and other VIPs are offered Perrier-Jouët Champagne, while other guests are served prosecco and Aussie Croser fizz. A little indelicately, the P-J is left out in the ice bucket for everyone to see rather than being tucked away, and the staff line of “it’s for first class and VIPs” grates a little, and is probably better kept for internal lounge policy use.

None of these issues stopped the lounge becoming my new T3 favourite, though. Well done, Qantas: the London lounge is a lovely holiday present for Heathrow oneworld travellers.