Sitting in the first public mockup of Airbus’ Airspace cabin, it was striking how much of a revolution this interior redesign is for the narrowbody passenger experience — and, with more than five thousand A320 family narrowbodies currently on order, how many passengers on how many flights will benefit. It’s not just the larger overhead bins, extra inch at the shoulders, or improved sense of window space with the new shrouding, either. It’s that Airspace provides a canvas for airlines and their designers to truly customise their #PaxEx to differentiate their product from others.

Airbus vice president for cabin marketing Ingo Wuggetzer, one of the key champions behind bringing the widebody feel to the narrowbody passenger experience, tells Runway Girl Network the reaction to the unveiling at the APEX EXPO was “amazing, generally. People passing by were always stopping, taking photos, looking in there, asking, ‘Can I have, can I see, can I join, can I experience it?’”

“All the visitors we had from airlines really love it. They are all impressed how we changed the experience inside a single-aisle aircraft, impressed about the visual appearance, and the possibilities that generates for them to apply their brains,” Wuggetzer says. “The question is actually, ‘When can we have it?’ It’s about the timing and it’s about the availability and ramp-up of those solutions.” 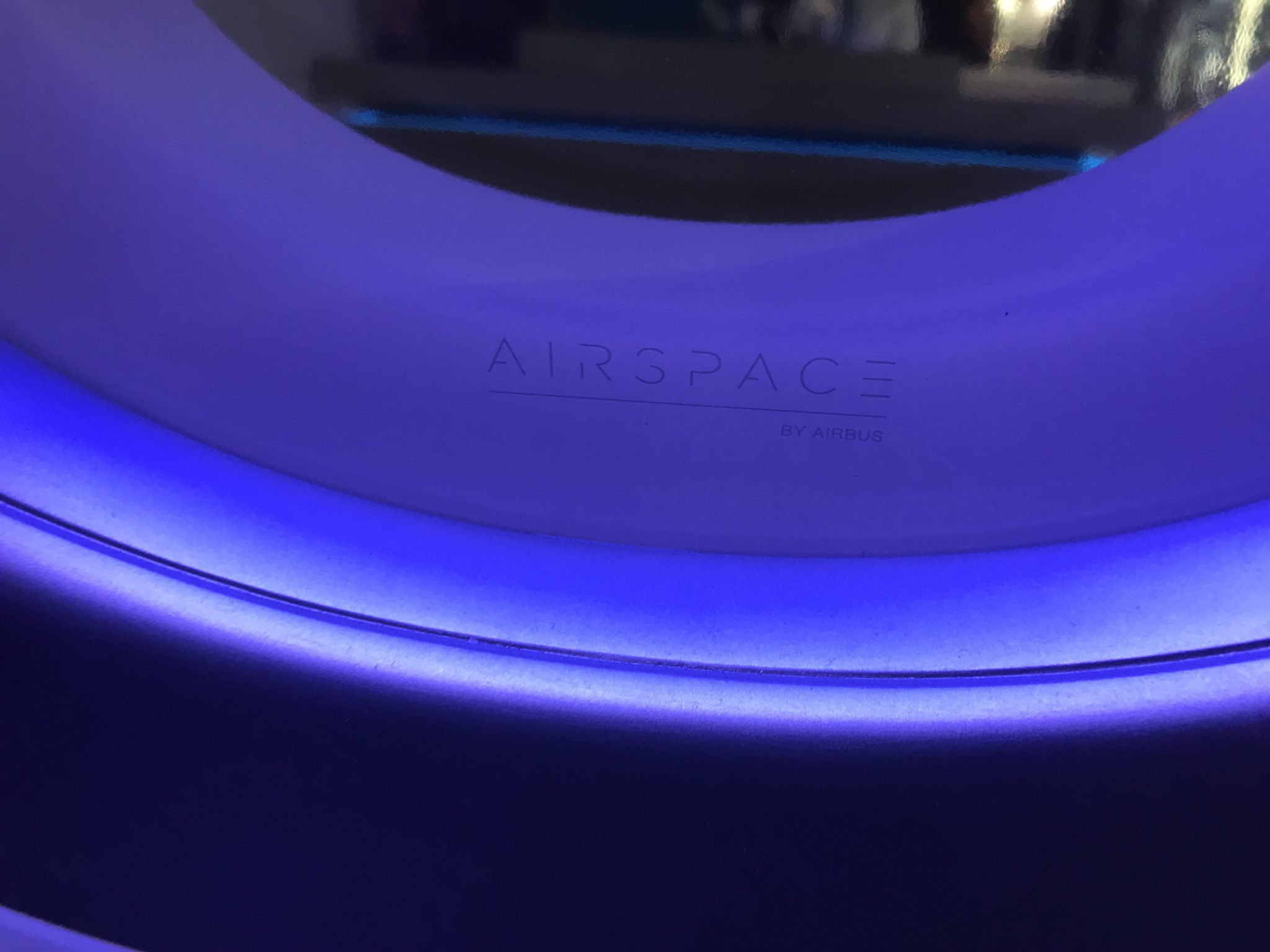 The Airspace brand appears etched into each window in the mockup. It will be fascinating to see whether airlines are okay with that. Image: John Walton

Airbus isn’t the only airframer to bring widebody inspiration into the narrowbody market, of course, with Boeing’s 737 Sky Interior developed from the Signature Interior of its latest twin-aisle jets. But the level of customisation available to airlines, and the level of Airbus branding carried through the cabin, is a step change from previous generations.

Airspace has been shown so far with the overhead signature lighting in the aisle displayed with what Wuggetzer calls “our pattern, our standard Airspace pattern, the ice crystals. Ice blue is the color we use for that. This is something you can customise completely.” Expect to see the design language of airlines worldwide rolled out onto the ceiling of Airbus narrowbodies from 2020, whether it’s the Delta widget waffle, Etihad facets, or whatever texture an airline wants. It will be fascinating to see how airlines choose to brand this space: whether it’s with their actual brand equity — prone to immediate obsolescence in the event of a rebrand — or with something more abstract that blends in with it. 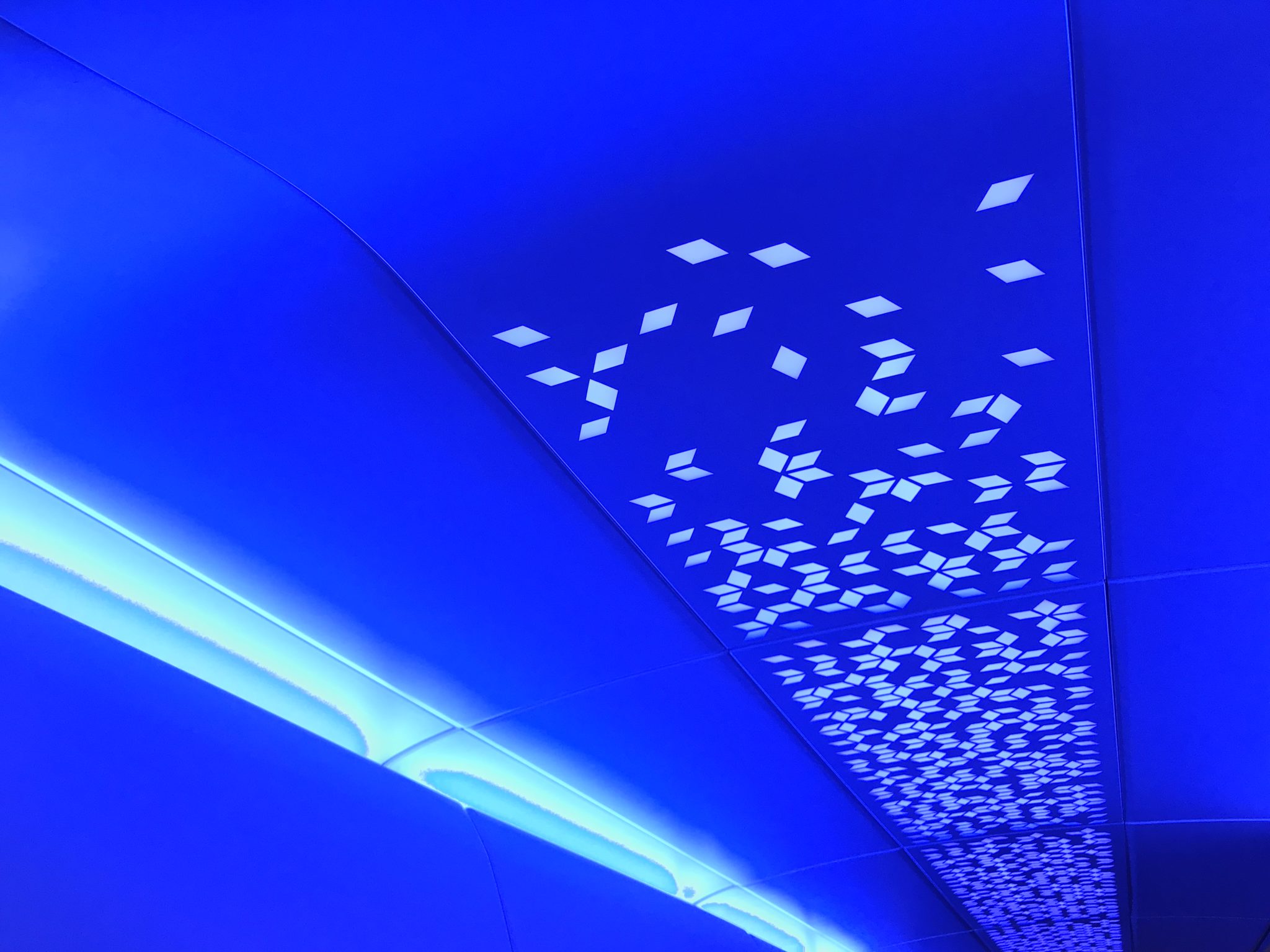 Not up for shaping customisation so far, though, is the U-shaped section at the front of the overhead lighting section, which “is driven by functionality, because still under the center panel you have a circuit breaker box,” Wuggetzer says. Members of the U-Fly Alliance may be delighted that their logo matches, but it will be interesting to see whether other carriers are enthusiastic to make a shape change.

The front U isn’t customisable — yet. Image: John Walton

In terms of the Airspace co-branding, it seems Airbus’ perspective has evolved since the unveiling of the original A330 Airspace in March 2016 and the A320 Airspace at the Paris Air Show this June. “If we can provide with that brand a value that is recognized by the passengers, that would add value to the airline brand as well,” Wuggetzer says. “So that means the more we invest in building up that brand, that could be a positive co-branding opportunity.”

There are, of course, a couple of mockup-related issues: for a start, the opening bins were positioned opposite a cutaway section, which made for great visuals but means that we will have to wait for a larger mockup to see what the experience is like for passengers to actually lift their bags into the overheads from an aisle with seats and bins on both sides.

Your author also noted that the bins seemed to be hanging an inch or two lower on the ceiling than expected, and that the visibility of seat number stickers was a little poor. Fetching an iPad from the back of the stand, Wuggetzer explained that my eyes weren’t deceiving me, and that as part of the Airbus team’s need to freeze the design of their mockup, the attachment of the prototype bins was not as flush to the ceiling as the final product will be. This also precluded the open bins from fitting as neatly into the ceiling panel recess as hoped.

But it’s overall an impressive product, ripe with flexible design possibilities for airlines, best demonstrated by, after a throwaway joke asking “just how purple does this thing go”, Wuggetzer had the team turn up the violet lighting to 11, washing the space in a moodlit bath of purple. Imagine what Airbus can do for an actual airline.