Another swathe of passengers can download content before they fly ever since Netflix late last year joined Amazon Prime in offering some downloadable content from its catalogue. But what will the impact be on demand for inflight entertainment and connectivity? Will a meaningful number of passengers simply download before flying rather than rely on IFEC? Runway Girl Network reached out to content and connectivity provider Global Eagle Entertainment, plus leading inflight streaming enabler ViaSat, to discuss.

GEE executive vice president for media and content Walé Adepoju doesn’t count Netflix’s move as revolutionary. “Airline customers have been able to download services like iTunes for years and Netflix download is just a continuation of this trend. The concept of content everywhere is one that we have embraced at GEE — allowing airline passengers to access content directly on their own devices, before and after a flight.”

Indeed, GEE’s Airtime product “allows passengers to download content to their own device at the point of booking, or anytime before flying,” Adepoju says. “Our unique DRM tool then manages the playback ensuring that certain secured content is only played during the flight.”

“One of the biggest appeals of inflight content is the unique early window content that we provide,” Adepoju notes. “This will remain a mainstay of IFE for years to come. Additionally, our premium airline customers, especially in the Middle-East and Asia, offer a volume of choice which is greater than many OTT providers outside of the United States.”

The convention that, as Steinman puts it, “movies remain airline passengers’ favorite content”, seems here to stay. That said, it’s hard to argue that any inflight entertainment onboard server can match the variety — and often niche interests — of Netflix’s streaming catalogues, which vary by country. Moreover, while the initial tranche of downloadable content is only a subset of the wider catalogue, Netflix is likely to continue to expand its hit in-house productions like House of Cards, Orange is the New Black (for which GEE owns distribution rights), and The Crown, not to mention zeitgeist fun like Fuller House and Gilmore Girls. 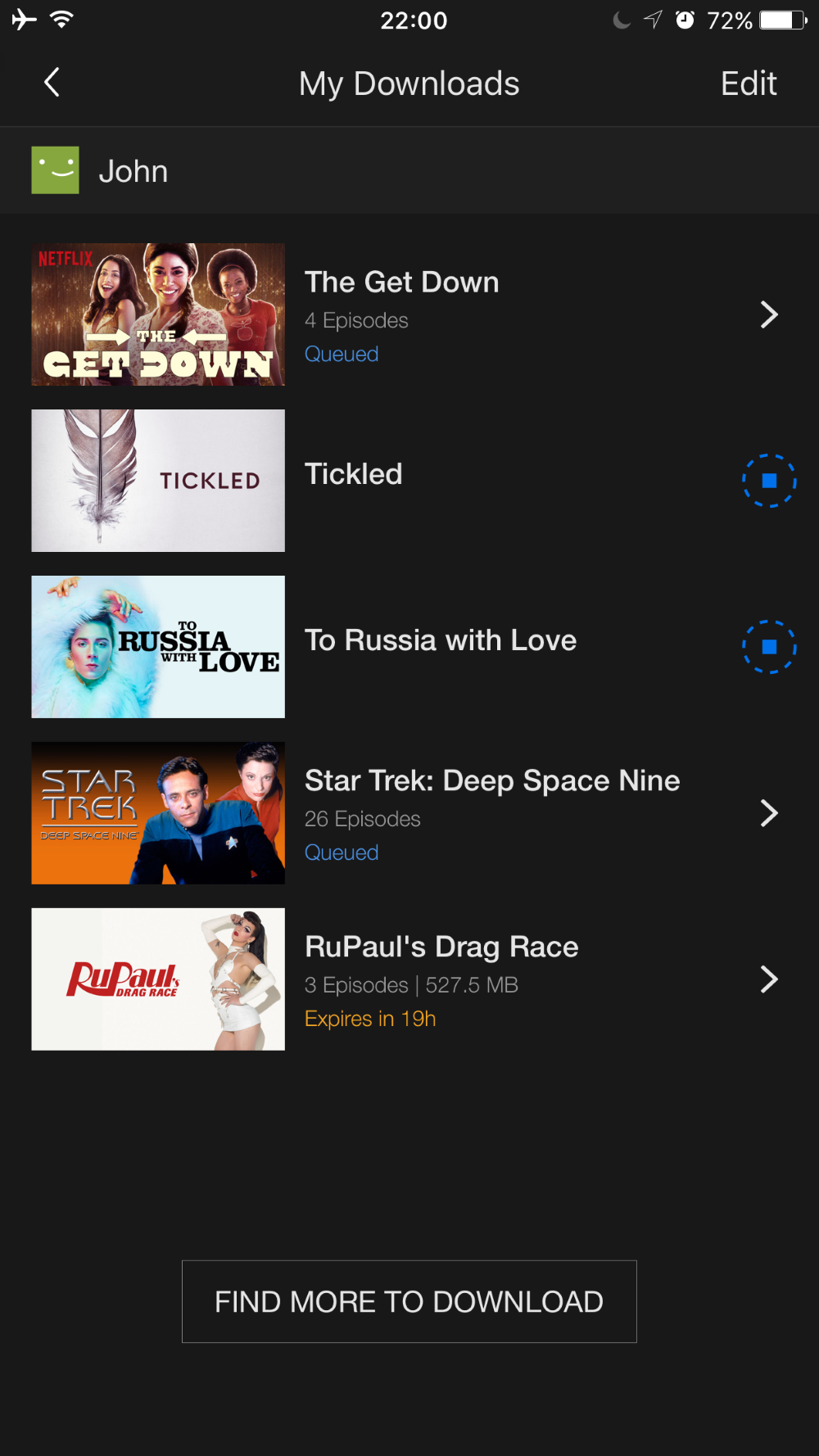 Many but not all passengers want blockbuster movies. Image: Netflix.

“Given the demographic of airline passengers, the content provided often covers a broad range of languages, cultures and interest. Many airlines have learnt to combine these factors with features like games, apps and live broadcast television to enhance the value proposition of air travel,” Adepoju notes, but it’s a rare airline that manages to serve the needs of all its passengers as well as they can themselves on their own tablet.

People love binge-watching TV on long flights, and it’s complex for airlines to provide the right mix of up-to-date content that passengers haven’t seen before but still want to watch.

Steinman notes, however, that “the number of Netflix subscribers globally remains a ‘tiny’ number – relatively speaking – and the Netflix catalogue has been shrinking in recent years.” Yet customers seem no less enthused, and Amazon Video (formerly Amazon Prime Video) as well as other national players like BBC iPlayer continue to draw customers.

Adepoju adds that, “with the birth of the iPod, the demand for music onboard just continued to grow. The power of content is such that development like this is likely to stimulate more demand, drive greater branding opportunities,  and enhance rather than replace IFE.”

ViaSat vice president and general manager for commercial mobility Don Buchman is equally upbeat about Netflix’s download catalogue. “This is a positive, as it is pro-passenger. Anything that increases the consumer and passenger choice is good.”

“Downloads from services like iTunes and Amazon have been around for a long time,” Buchman notes, “and continue to be the viewing of choice for many passengers. This is really the trend to personalization for passengers, letting them access their content when they want, whether it be via download or streamed on demand. The latest trend in video viewing is coming from social media sites like Facebook and Snapchat, where streaming is the method of viewing. So whether video is downloaded or streamed, the one constant is the requirement for a fast, ubiquitous wifi connection, and we continue to see growing trends for both from our in-flight passengers.”

Buchman, of course, wants to emphasise that passengers shouldn’t need to preload content. He tells RGN:

Our mission has always been, and still is, to make high-quality, ubiquitous connectivity a norm, so planning for a lack of good wifi is a thing of the past. We have always said that a passenger should be able to do on the aircraft with their devices what they do on the ground. We continue to see this in our passenger data, where usage patterns mirror what Sandvine reports for service on the ground. If they are avid YouTube watchers, enjoy movies, read digital books, always on social media (especially new live video features), whatever they do on the ground, they should be able to do while flying. There should be no behavior modification needed.

Having tried the Netflix downloading option during recent intra-Asia flights (on an airline without connectivity and with a notable lack of up-to-date, English-language content in high definition without hardcoded subtitles), it seems clear that Netflix and other downloading services are offering a compelling product. Major Hollywood studios continue to disallow the streaming of early window movie content to passengers’ own devices, of course, but is this grip on content eroding as the cable companies’ has done within the home? Most passengers’ tablets will remain a superior viewing experience to small economy class screens — and even most business class seatback viewing experiences — until retrofits are completed with the latest generation of IFE monitors, at which point consumer electronics may well have moved on to the next generation of media consumption. Keeping up with the Joneses (or, really, the Cooks, the Lees and the Pichais) will take continued effort by the IFE industry.