If you own an overwhelming slice of the pie in a particular market, do you stop innovating? No, says onboard technology powerhouse Astronics, which is understood to enjoy a 90%+ share of the aircraft in-seat power socket market.

At the APEX Expo this year, the response was electric when RGN posted pictures of Astronics’ thought-provoking concept demonstration of USB 3 Type-C technology in the seatback tray.

Much of the immediate feedback was about the issues with the location of the ports — will they be spill magnets? Will they work when the tray is closed? How will they be certified? Won’t charging cables get snapped off too easily? Astronics is clear that the locations are just a concept, given the predominant request from airlines to move power locations to the seatback rather than underseat so they are visible and easy to spot.

The real trick will be the nature of these ports, and it’s important to understand how Type-C and USB 3 differ. In essence, Type-C is the plug shape, around the size of an Apple Lightning or micro-USB jack, and reversible — it doesn’t have an up or down like previous USB connectors.

By contrast, USB 3 (and USB 3.1) are the protocols for charging and data transfer. These are different things, and while they overlap often it’s not a given: while the Nokia N1 tablet supports the Type-C connector, it only supports the USB 2.0 protocol in terms of speeds.

USB 3.1 is the latest update of the USB 3.0 standard (which can be spotted in the wild by the use of blue plugs and sockets). Notably, USB 3.1 also provides for 100W power — more than most laptops will require. The new MacBook, for example, takes 29W.

That means, as Astronics was demonstrating, that passengers can plug their laptop charging cable directly into the USB 3 power socket, omitting the charging brick entirely. 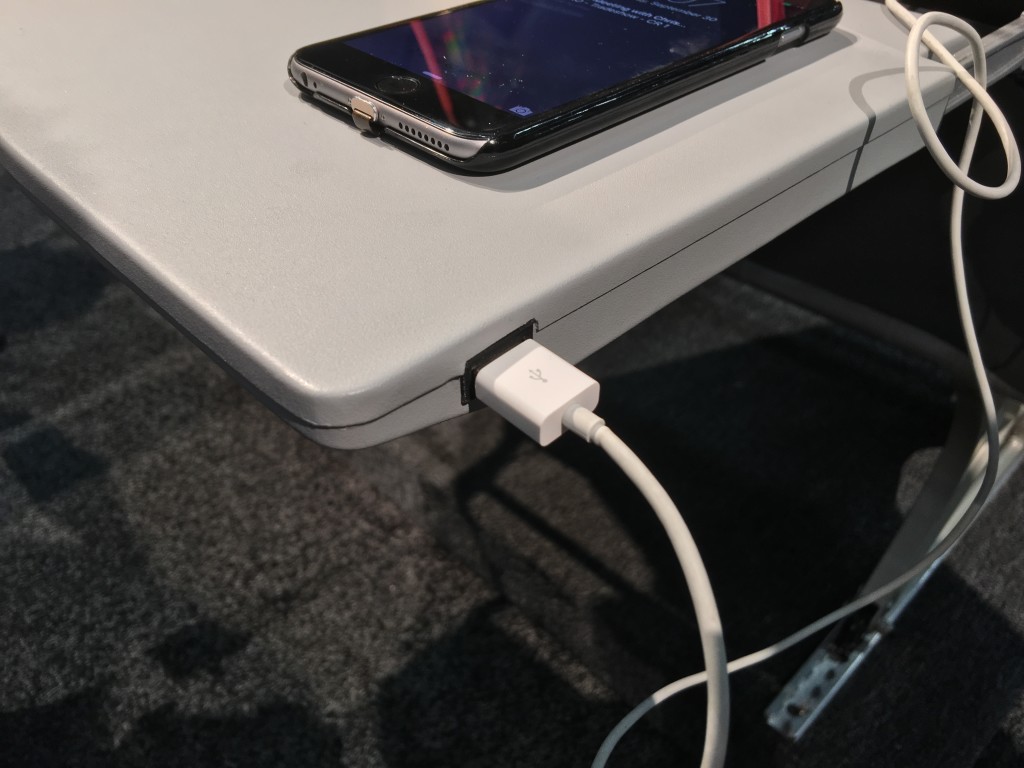 Could this be the innovation that kills the onboard AC socket — Astronics’ bread and butter — as dead as its old DC EmPower port?

It certainly bears watching. Far too many of the USB sockets on board aircraft, including those being installed right now, are low-power 1A versions that can’t even maintain the charge in some modern smartphones if they’re being used. Even the 2.1A sockets that were the gold standard as recently as the Aircraft Interiors Expo in Hamburg this April

Given that devices including the new Apple MacBook, Google Chromebook Pixel, and Nokia N1 tablet (yet not the iPad Pro) use USB Type-C, this would seem to be a cross-manufacturer standard that has some legs. While Apple’s Lightning connector has legs given Apple’s phone and tablet market position, its Thunderbolt connector for laptops and desktops hasn’t seen the same popularity. Google’s support will be a big plus here.

Airlines and seatmakers need to watch and work in this space carefully. Astronics’ vast trove of in-seat power patents have kept its AC power dominance in play — but its leverage in USB is less clear. Staying ahead of the curve is the right approach.