Walking the floor of the recent APEX Expo, one couldn’t help but observe that a number of companies are eager to crack into the smoking hot in-seat power market – a market dominated by Astronics (which now holds an estimated 90% market share) followed by the distant number two player, KID Systeme.

We know BAE Systems is preparing to roll out its new in-seat power system, and Armstrong and Inflight Canada have been offering retrofit packages for some time. Portable IFE specialist digEcor also wants in on the game, as do other firms. I sat down with Astronics executive VP Mark Peabody and company director of business development and technical services Dennis Markert to learn whether Astronics – which owns some clutch and tightly held patents for aircraft power systems – is seeing anything that might thread on its IP.

“Yes, there are quite a few red flags,” revealed Markert, who alongside Peabody declined to say just who’s product is causing concern.

So how does Astronics respond to this sort of thing? “We start with a back room conversation, and say, ‘let’s figure out how to work it out’,” says Peabody. But if that doesn’t work, make no mistake about it – Astronics does not fear litigation.

“We will vehemently defend our IP, and we have,” notes Peabody. 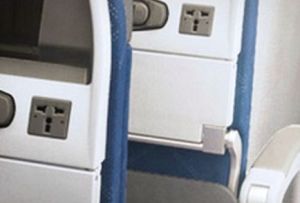 Do any of the major IFE suppliers want to enter the in-seat power market? It doesn’t appear so. “We have such good relationships with them that they really respect what we do. In the past they tried, but they lean on us as core people, and they look at us as an extension,” says Peabody, noting that power is not easy. “We have a few chief engineers that are serious power experts.”

On the flip side, Astronics – which saw its third quarter 2014 consolidated sales increase 100.1% to $179.4 million – isn’t interested in creeping into the business of manufacturing IFE systems. “We’re not going to compete with our [IFE] customers. We may do tangible stuff to support them but we’re not out to do that. We like our customers we want to keep them happy,” says Markert.

Though defending IP is important to Astronics, one way to ensure it maintains market dominance is to stay ahead of the competition. “We are always trying to stay one step ahead. We don’t talk about a new product until its done. There is always something new in the books,” says Peabody.

So, for instance on the Boeing 787 and the Airbus A350, “we wrote a physical strategy and put those tests together and went and attacked each one, and had a strategy with the IFE vendors and knew we could get offerable on the 787 and A350.” But the need for power on narrowbody aircraft is now also fierce. “Way less than 10% of narrowbody seats have power,” notes Peabody.

Meanwhile, in-seat power is just a small part of what Astronics does. “We also do electrical power systems for aircraft, circuit breakers, power generation…power to the lav, sidewall power supplies, antenna power…” notes Peabody. Yes, those antennas sitting atop aircraft to support inflight connectivity obviously need power too, and indeed powering antennas “are a couple of the hardest things to do”, says the Astronics executive.

The company also supplies some of those antennas, including on Gogo’s Ku programs for Delta and Japan Airlines, and tail-mount antennas for business jets.

During the NBAA convention last month in Orlando, Aerosat launched a Ku satellite antenna system called FliteStream T-Series, which incorporates a new tail-mounted antenna design for Cessna, Bombardier, Embraer, and Gulfstream aircraft, among other types. This extends the benefits of Astronics’ FliteStream F-Series antenna system for VVIP aircraft to an even greater segment of the long-range business jet market. And it offers dedicated connectivity via Harris CapRock, a global provider of satellite service. Astronics says the T-Series package includes a defined upgrade path to Ka-band and a Certification Assistance Program that includes a full installation design and STC data package.

When high throughput satellites (HTS) are launched, “we’ll have an antenna”, confirms Peabody, declining to comment on specifics. He does see room for both phased array and conventional mechanically steered antennas in the market, however.

Meanwhile, Aerosat president Dennis Ferguson is excited that connectivity has come to life finally, and believes there is “a mix of things out there, and we all just need to look at what serves the market best” in terms of antennas for HTS.

I asked Ferguson if he could ever envisage a day when Aerosat/Astronics might try to move its inflight connectivity mesh network plan forward. He just smiled and gently reminded me that Aerosat owns the patent.